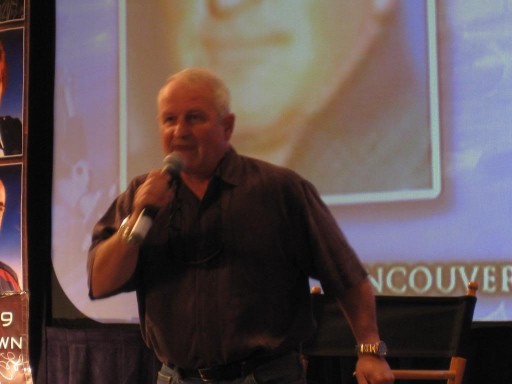 N. John Smith was extremely gracious, even to the point of doing free autographs! I got his signature in the autograph section of my 10 Years of Stargate SG-1 book!

Poor man, we kept putting him in the hot seat, asking him about the SG-1 and Atlantis movies, Stargate Universe, and he kept having to say, “Ask Brad and Robert”!

He told us that Sanctuary is currently actively shooting but he is not doing much on it on this time. However, he was an extra in a scene in an upcoming episode. It was filmed outside in the cold, he complained that it took 20 takes. Also, he thinks that the Sanctuary sets might be available to tour at the next Vancouver Convention!

Here are some of the questions that John took:

Was there any pressure to make Stargate like other shows like CSI? John joked that he seriously never watched a full hour of a television show. They (himself, Brad Wright and Robert Cooper, I think he meant) would watch a little to “check out the competition” but they never intentionally emulated anything all the way through. “Our writers have their own things they want to do.” Creatively, he said that Brad and Robert make all the final decisions.

Mon Apr 6 , 2009
Here’s the big news about Stargate Universe from Brad Wright and Robert Cooper! Currently, Stargate Universe is in it’s 5th week of shooting. There will be a healthy use of humour just like in the other two shows, and there will also be back references to the other series and […]