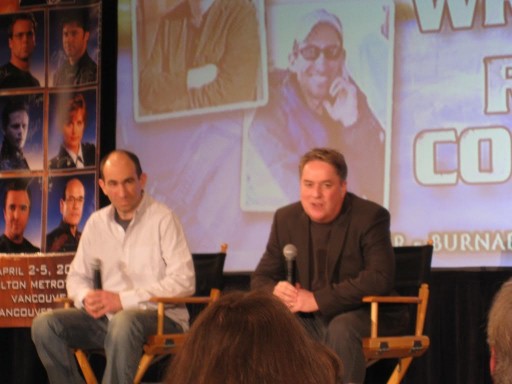 Here’s the big news about Stargate Universe from Brad Wright and Robert Cooper!

Currently, Stargate Universe is in it’s 5th week of shooting. There will be a healthy use of humour just like in the other two shows, and there will also be back references to the other series and CROSSOVERS! That’s right! SGU is NOT going to be cut off from Earth and Atlantis the way Atlantis was separated from the SGC for it’s first season! That means the potential for guest stars from SG-1 and Atlantis has increased! Further more, when Michael Shanks was asked about it later, he said he wasn’t allowed to talk about it. Therefore, there is a very good chance that Daniel Jackson will appear on Stargate Universe!!!

The series will reveal further history of the Ancients, and other alien races will be discovered. Robert suggested that these aliens will not all be humanoid, and will not all speak English! When asked about whether we may still have a chance to meet the Furlings for real, they didn’t rule it out!

Robert wasn’t positive, but he seemed to think that Space, the Canadian science fiction channel, will be airing Universe simultaneously with Sci-Fi, instead of being as much as a year behind the airing schedule in the US.

When asked if the Stargate for Universe would be different just as the Atlantis gate is different from the SG-1 gate, Roberts said that he didn’t want to give it away, but “I think this is the coolest gate ever.” He also said that when we first see the gate, it will lock a chevron that we have never seen before.

Stargate Universe will be filmed documentary style because Brad and Robert wanted to see the camera go to more unusual places and see things fro a different perspective.

Brad and Robert’s parting words were “Please give Stargate Universe a chance!”

Mon Apr 6 , 2009
Every one’s favorite archaeologist arrived Saturday night, signed autographs, and then had his Q&A today. I was so very happy to see Michael looking bright and chipper! Both he and Amanda Tapping rescheduled their autograph sessions for last night so that they could leave earlier today to get ready for work […]