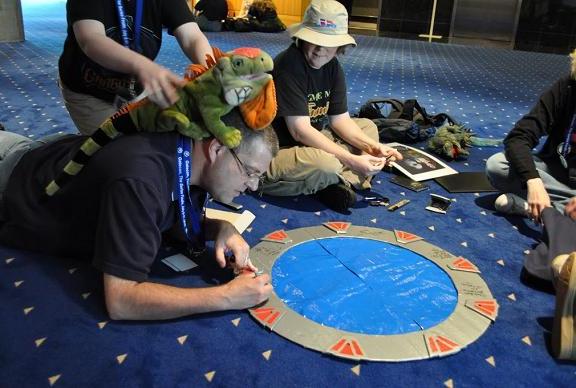 First up on stage was Stargate Atlantis’ Dr. Beckett, Mr. Paul McGillion.  I decided to get the preliminaries out of the way, by yelling, “Are you married yet?” He smiled and replied that the wedding is in September, “if she will still have me.” Apparently, the bachelor party had already been taken care of. Good old Paul had been run through the mill with several sporting events which had left him with bruised ribs. Now there’s a man who really wants to get married. 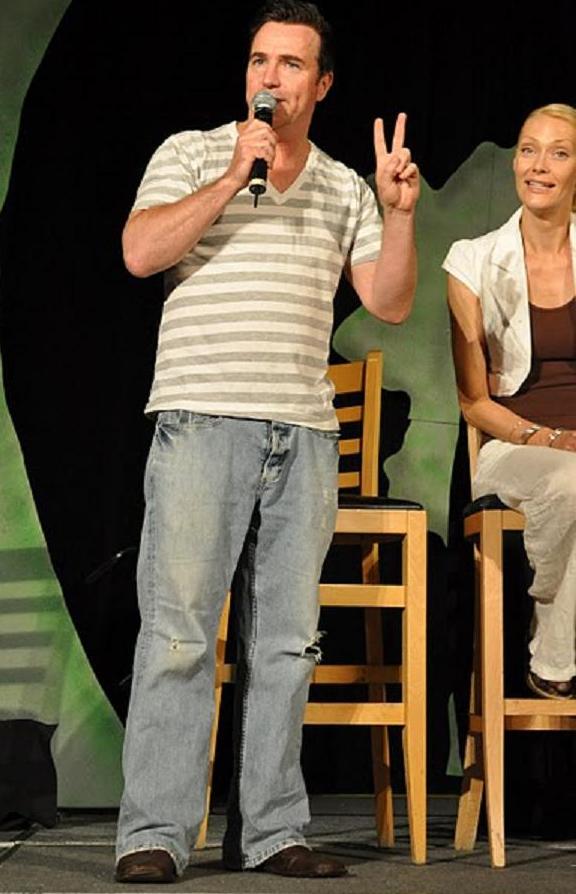 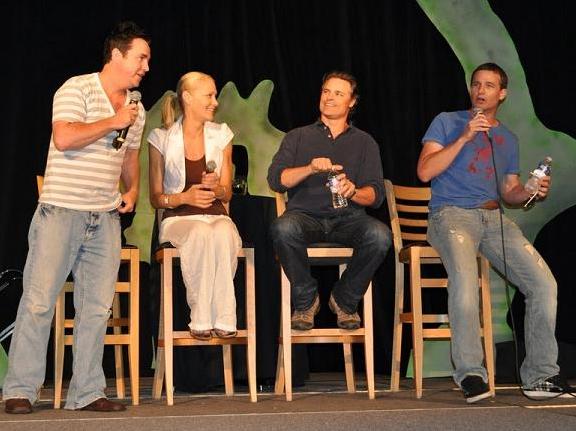 When asked what Paul’s favourite episode was, he mentioned that the pilot was pretty cool. He enjoyed the interaction his character had with Joe Flanigan’s character at the ancient chair. But if he had to name a great episode for him, it was, “Poisoning The Well”, an episode in the first season.  “Martin Wood directed it,” Paul added, “when you get a chance, talk to Damian Kindler who wrote it. We talked about the retrovirus, then, we talked about my Scottish accent. It was the first time I got to use my acting chops and the first episode when I wasn’t a recurring character”. 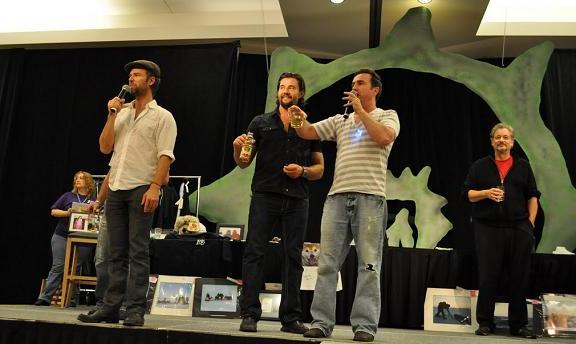 Paul said that his favourite movie is Avatar. He saw it in London in 3D. He also spoke about an incident he remembered working with Gary Jones, who played Walter Harriman. Gary was sitting in his usual spot as the gate technician. The scene was running long, and he was falling asleep. Then there is a “ping, ping” noise on the glass of the control room. The noise wakes him up. It’s the director, a big guy named Mario, tossing pennies at the glass.

Paul was also asked about how hard it is to be a doctor on Atlantis. “Very hard,” Paul said, “but being a medical doctor in real life is the hardest. I was okay. Lots of people come up to me and cure things. And I do. I cure everything.” Paul’s remark was followed by laughter from the audience. Peter Flemming, who had played Agent Barrett came into the room and stood at the door to listen. Paul noticed him, then stated, “You’re wearing the same blue shirt as yesterday.” Peter countered, “I got ketchup on my shirt at 3:00AM so I had to wear this one”, to which Paul stated, “No, it’s because you’re hung over.” 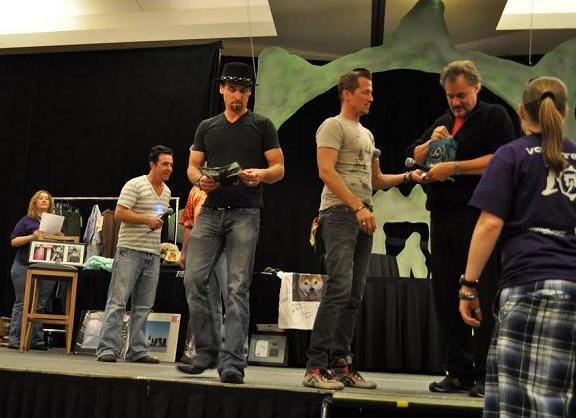 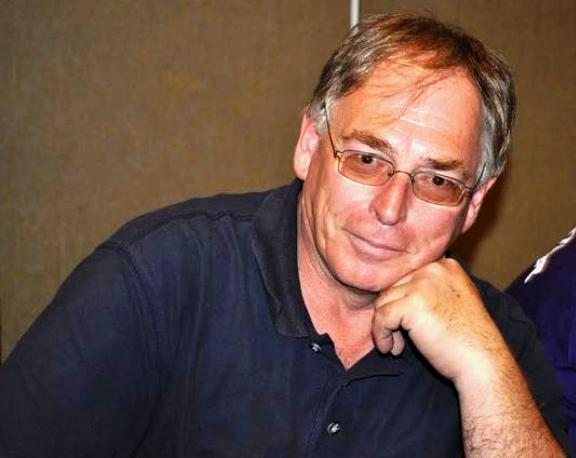 Later in the day, Garry Chalk (Col. Chekov), Peter Flemming, Dylan Neal and Andee Frizzel were asked what else they wanted to do for a career choice. Garry stated that he was a bouncer at the Biltmore when he was much younger, but he wanted to be an English Literature teacher. Peter Flemming said that he was unemployed and living at home until he was 25, when his mother kicked him out of the house.

He saw Tom Cruise and decided that he wanted to act for a career. “I was scared as hell when I started,” he said. Dylan Neil began as a furniture builder and illustrator. He not only decided to become an actor, he said, he also married one. He said his wife is currently writing a script and he will be producing it. “We live a gypsy life as actors”, Dylan added. “Any freelance artist is taking an incredible gamble with their lives – they are the most courageous people you’ll ever meet”.

Andee Frizell said that she became an actor because she wanted people to pay attention to her. She taught English in orphanages in South America for a while, but her real passion has always been acting, and yoga. Bruce Woloshyn recalled long days and nights of Stargate VFX while Barry Campbell discussed Stargate Continuum! 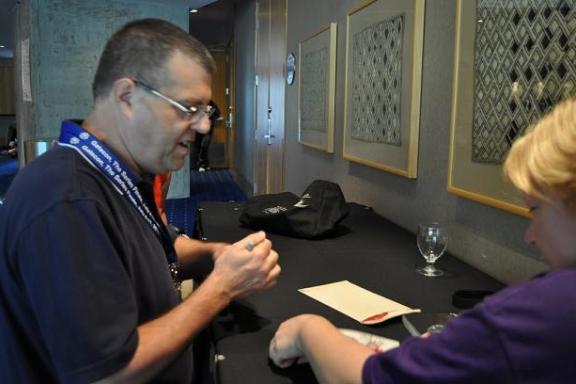 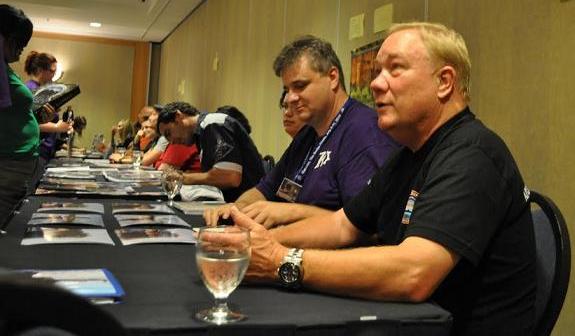 Frank Cassini began his career behind the camera, but after doing that for a while, he decided that he’d rather be in front of the camera. He went to New York to do theatre, but eventually returned to Vancouver to continue acting. Right now he is writing and producing a horror film as well as starring in a Canadian production “The Bridge” now playing the in the USA on CBS. 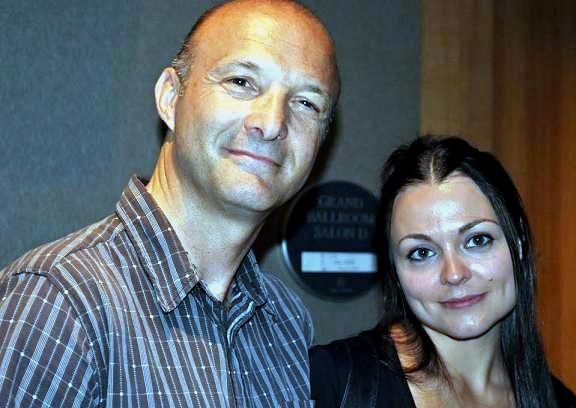 After a break, Erick Avari, Dan Payne, Jeremy Rector, and Steve Bacic were asked, what are you doing now?  Erick said he is working on a documentary. Dan Payne is keeping busy looking after his 18 month old son. He can already do a, “one timer in hockey”. I was not sure what that meant, so I asked him later. Dan told me, “it’s when a player receives a teammate’s pass then fires an immediate slapshot toward the net”. Look out Sydney Crosby. 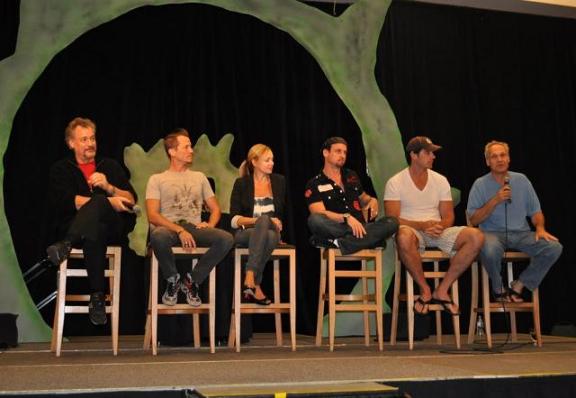 Dan Payne (pictured below) also just finished working on a movie of the week with Faye Dunaway. Jeremy Rector is concentrating on his four month girlfriend. He was quick to add that his girlfriend isn’t four months old, the relationship is four months old. He also did an episode of Eureka. Steve Bacic was involved in the last half of the season of “Big Love”. He said, “they don’t give me scripts; they give me scenes, so I go onto set not knowing what is going on, which is normal for me.” 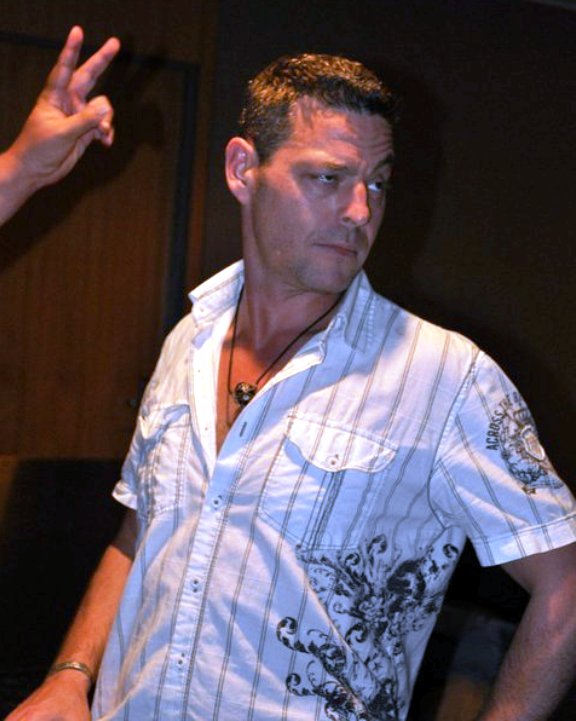 A question was asked about what the actors thought when they got their Stargate role. Did they know that the show would be big? Cliff Simon answered first, “I read for a special character, but it was in the future. I didn’t know from week to week when I’d be working next. It’s up to the fans if they like the character. Cliff Simon stated “I was fortunate that Ba’al was popular.” J.R. Bourne stated that he had read for an evil Tok’ra, but got Martouf. Dean Ayelsworth (pictured above) ended up with an established character, Anubis. He said he didn’t know anything about the character because he was only familiar with the movie. 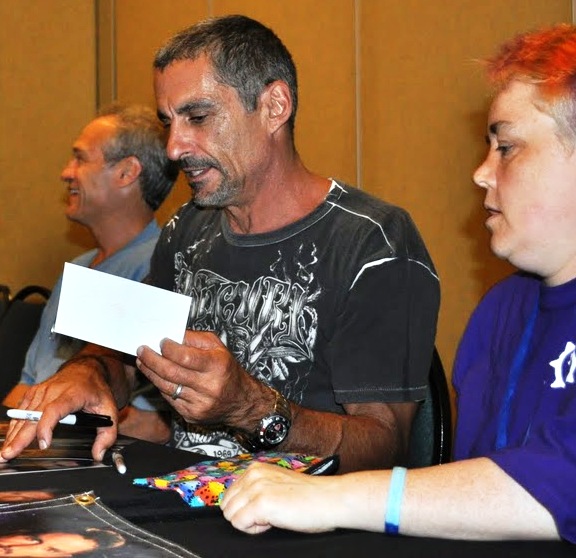 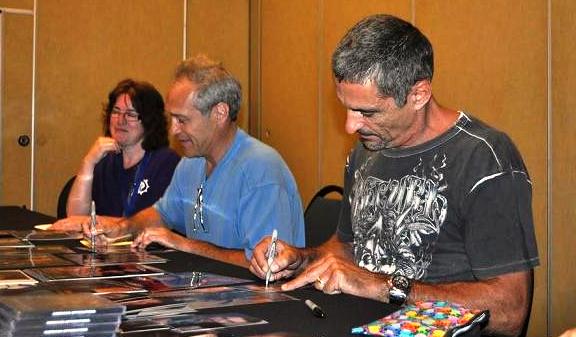 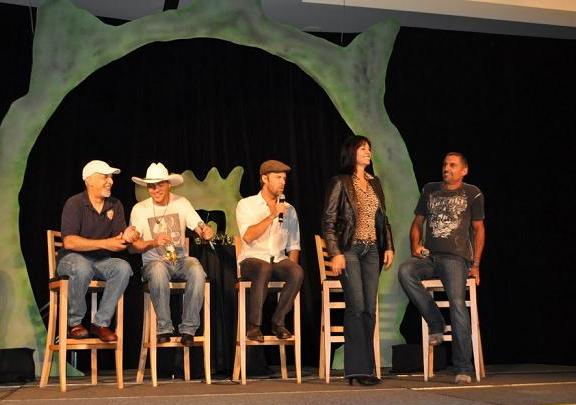 Erick Avari was auditioning for Kasouf in the MGM Stargate movie. “My character only had a couple of lines. I was told most of

it would be improve. I was first in to read after lunch. The casting director was eating a candy bar. I watched him eat until he became self conscious and he offered me a piece. I acted as I did in the movie, and that’s how I got the part.” Steve Bacic answered the question with the shortest response by saying, “I can’t remember how I got my role.”

During the convention, the actors spent most of their time either visiting with their fans, signing autographs, or hanging out with each other. Cliff Simon did some sight-seeing. He told me that he and his wife took a plane ride along the Queen Charlotte Islands. They were looking for whales, but didn’t see any. Several other actors like Dean Ayelsworth, Peter Flemming, Gary Chalk and Erick Avari had lunch or dinner with the fans, enjoying the opportunity to get to know them better. 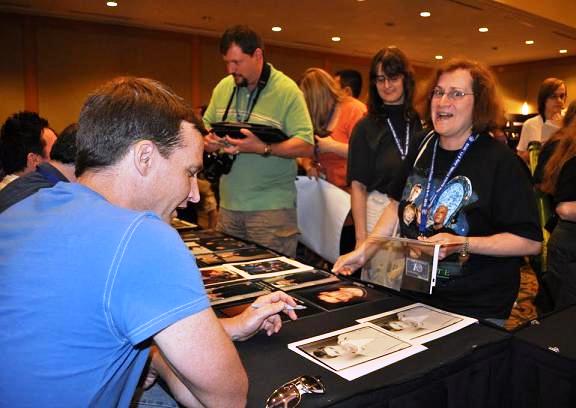 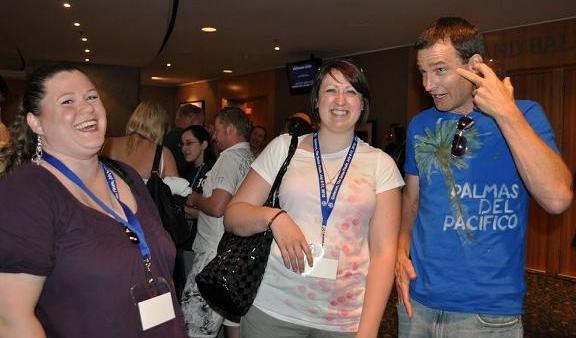 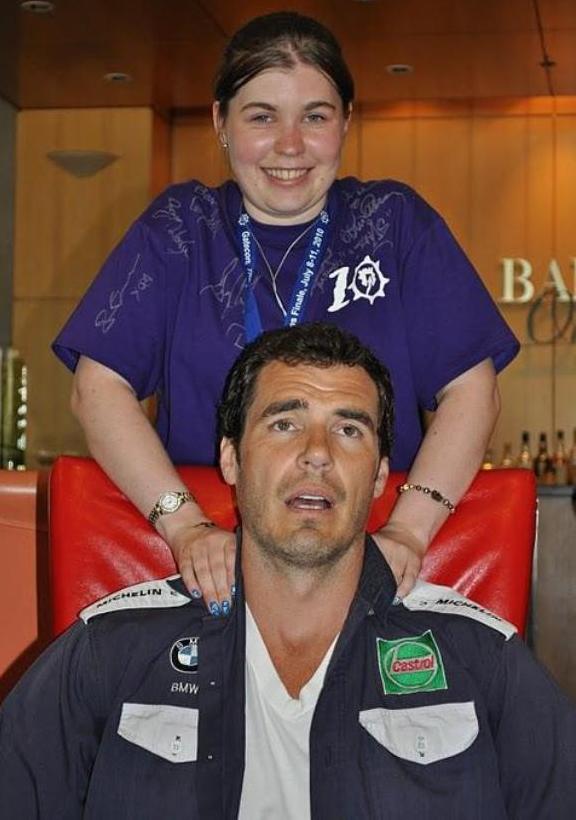 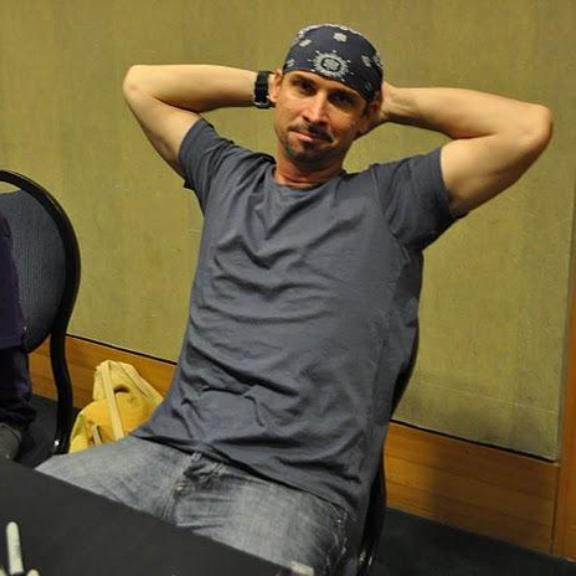 Most of the actors like Colin Cunningham and Dan Payne (pictured above) made themselves available to the fans as much as possible and really seemed to enjoy themselves. Gatecon is very relaxed and lots of fun for both the fans and the actors. Although this Gatecon was promoted to be the last one, everyone had such a good time that the organizers were asked many times to continue to bring Gatecon back.

Let’s hope they do.

3 thoughts on “End of an Era in Vancouver? No Way! GateCon 2010 Concludes With a KA-Whoosh!”

Fri Aug 13 , 2010
Hey Lost Fans! LOST is a series beloved by virtually all of the reporters at WHR. I myself was astounded at the final episodes and will be participating LIVE in the LOST LIVE Auction and Exhibit event announced below by Profiles in History! Something very LOST and very special is […]