Welp, another year of the at home convention due again to COVID 19.

Another year of online content, BUT, it’s another year of staying home and staying safe thanks to the fantastic planning by the great team at Comic-Con International!

As much as it was disappointing to not be able to participate again in the in-person convention, we were still able to enjoy the panels virtually, and there were many fabulous ones to partake in!

I am hoping that we will all be able to see each other again in July 2022 where we can celebrate all things nerds and geeks together and in person. In the meantime, please enjoy the Heels panel from Comic-Con at Home 2021. 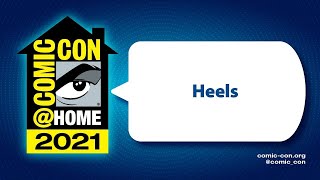 The show will be bringing us into a glimpse of what a small-town family wrestling league is like. The DWL, Duffy Wrestling League, will let us see the best and worst of what it is like to be a wrestler and a “heel.” The definition of a Heel is the villain or bad guy to the “hero” in the ring.

The moderator for this panel is Senior TV writer at Variety, Joe Otterson. For those that do not know, Stephen Amell is a HUGE wrestling fan, so bringing this series to life was not only a dream come true, but something he was very enthusiastic and knowledgeable about.

With showrunners and executive producers Mike O’Malley and Michael Waldron, they were able to bring authenticity to the series along with grit, heart, drama, comedy, and a deep sense of family.

Allen Maldonado who plays Rooster Robbins talked about how the 8-year-old kid who would watch wrestling in his living room, being a part of this series was a dream come true to be able to live out that fantasy. The actors did indeed do their own stunts and have the bruises and broken bones to prove it. For James Harrison Jr. (Apocalypse) who spent 15 years as a pro football player for The Steelers, Baltimore Ravens, Bengals and Patriots, the training and athletics of the sport came a bit easier for him.

For Mary McCormack’s character of Willie, it is a way for her to exist in a very masculine world. How she can hold her own against these men of great strength, Alison Luff who plays Stephen’s wife Staci Spade, mentions “The women are the underbelly of this community, they are what give the men strength”

Chris Bauer’s character, Wild Bill Hancock is a reminder or foreshadowing of how bad it can get if you keep on that road that leads down bad paths. It reminded me of Kevin Costner’s character in Bull Durham, how Crash made it but failed at the same time. Chris described his character beautifully and hilariously by saying “Wild Bill is bad weather in a snakeskin suit.” And he told us his catch phrase, “It’s all a ring, sweetheart” meaning life and what it brings to us.

I am looking forward to seeing this series, because it will not only bring a side rarely seen by wrestling fans to the screen but will show family dynamics and how fame and trauma can shape a family. Stephen mentioned that Jack is his brother’s keeper and that relationship and how it has evolved or devolved over the years because of their missing paternal figure. I am excited to see how each of the main actors deals with “the real love, but with immense trauma” as Alexander mentioned. It cannot be easy for them having an absent (deceased from what I gathered) father in a world of such masculinity.

In the first few episodes it is noted that it “gets worse before it gets better” but hey what is a good drama without chaos and conflict. Series like these that deal with ultra-masculine sports always have the tricky situations of not being a cliché. Because the show is dealing with a sport that has a reputation for being grandiose and high stakes, it will be interesting to see how this show will bring the humanity and reality to the screen.

Casting is always one of the most crucial parts of any series. With this diverse cast, it helps having Stephen Amell who has an insane knowledge about the sport at the forefront. It is also great to see actors of color represented on this series and given a voice as well. They are not just background players, but part if the team and family.

I must say I was a bit shocked when I saw Mike O’Malley’s name attached as an executive producer and showrunner, I always knew him as an actor primarily. It is nice to see him adding another hat to his resume and that he is just as enthusiastic about this series as Michael Waldron and Stephen are.

Well as I end of my panel review here, I want to thank the cast and executive producers for giving us a glimpse into the world or wrestling. I am looking forward to more. Heels will start airing on Sunday, August 15th at 9:00pm on STARZ, tune in and get ready to rumble!

Thank you for visiting WormholeRiders News Agency. Thanks to Kenn for video embedding for my feature article. Kenn and I will be back soon with more about Comic-Con at Home 2021 to provide new analysis about a wonderful series that returned to our screens this year and a legend in the movie industry!

Fri Aug 20 , 2021
Welcome back Stargate Fans, Sometimes in the life of science fiction television series fans, opportunity presents itself. Today is one of your lucky days! Ms. Patricia Bertrand, a Stargate fan that we all know and admire, is working to raise funds for a Canadian charity known as Victims Services. She […]