Spoiler warning for United States Primeval fans: This review discusses episode three of Primeval series four. If you do not like spoilers, please stop reading now. You have been advised.

For those in the United States that do enjoy reading about spoilers, please continue reading my review.

A special BBC America Primeval promotional prequel episodic trailer video is included below that will play in either the United States and the United Kingdom. I hope you enjoy it as much as I did because Alexander Siddig of Star Trek Deep Space Nine is a new Primeval character in series four named Phillip Burton who is featured in the promotional trailer among other fantastic sequences. 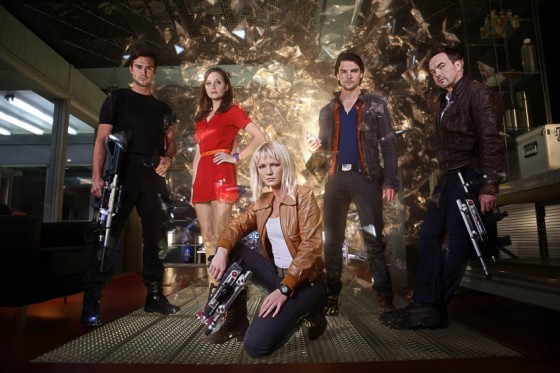 Episode 3 begins in the storeroom of what turns out to be a theatre. A chandelier glistens in the light of an open anomaly. A mysterious lady steps through, followed by a man supporting a poorly woman.

They cautiously make their way through the theatre to the stage, where they head for the nearest exit. All the doors remain barred shut despite the efforts of the man to open them. Their mission, it appears, is to gain access to drugs to save the young woman’s (Charlotte) life. Unfortunately it is too late, and the woman dies in the arms of her friend (Emily). Distraught at the loss, Ethan blames Emily for waiting too long to save Charlotte (a ‘red shirt’ character). Unknown to them, a rather nasty looking reptile bursts through the anomaly.

Once again Matt is having a meeting in the picturesque surroundings of the mysterious mans garden. Their discussion is even more mysterious. The man has little time left to live, dismissing Matt Anderson’s plea to seek more help, he is only interested in making sure Matt works out who “it” is. Why has this man spent his life waiting for this moment to unfold? What event are they talking of? I’m intrigued.

At the A.R.C, the anomaly detector signals the detection of an open anomaly. As the team prepares to move out, Philip Burton drags Connor Temple from the team to run a basic analysis on the new security protocols. Connor is not amused at being pulled away on such a menial task. Jess pulls Matt away from his meeting, and he heads for the theatre.

Matt arrives before the intruders have time to return home; and discovers the open anomaly in the storeroom. Emily causes a distraction, manages to dart round him and jumps back through the anomaly. Thinking that Emily has panicked and jumped through by mistake, Matt throws his black box to the floor and enters the anomaly after her. Becker and Abby arrive to find no sigh of Matt, and with little choice left to him, Ethan goes into hiding leaving Charlottes body behind. Becker locks the anomaly preventing no further movement in either direction.

Matt chases Emily into her world, a rather bleak colourless sort of place. Entering into a forest, Matt is knocked almost senseless by an irate Emily. She screams at him “I don’t need your help you fool, go back”. Unfortunately she should have looked skywards before uttering those remarks, as a long tailed reptile snares her from a tree, and hauls her into the air. Removing a dagger from her boot, she stabs the creature and it lets her fall to the ground. Injured by the fall, Matt drags her back to the anomaly but finds his path barred, they can go no further.

Abby, realising Matt must have gone through the anomaly, begs Becker to reopen it. He refuses, protocol dictates he must follow orders and keep it closed. I feel this is the appropriate time to side step a little and take a closer look at Becker and his behaviour. Becker used to rely on his instincts and that of his fellow team mates. Now it seems, he is only concerned with playing to the rules.

This seems to be the result of having lost so many people to the anomaly. He doesn’t seem to trust himself anymore, or that of his teammates. If there are any more losses to deal with, then he cannot blame himself for his actions if the rules were followed to the letter. Becker has a job to do, so don’t mess around with him. I don’t like this newer cold hearted side to him.

Listening to the conversation with Abby Maitland, Connor also appeals to Becker to reopen the anomaly. He cannot let Matt experience what Abby and Connor went through in their year stranded in the cretaceous period. Becker finally changes his mind, and not a moment too soon, as Matt barges through with the injured Emily and the vicious tree creeper in hot pursuit.

Abby, Becker and Matt escort the injured Emily to hospital along with the body of her friend. Waking up in a hospital bed, the disorientated woman refuses to answer any questions posed by Matt. When he leaves her to catch up with Abby and Connor, she takes the opportunity to escape. From the result of the autopsy and the behaviour of Emily, Matt soon concludes that they are not of this time period. As Becker prepares to take Emily into protective custody, they learn of a creature incursion back at the theatre. Abby and Becker return to the theatre, whilst Matt learns of Emily’s escape.

Connors day is steadily getting worse. Bored by the process of his work, he pays little attention to detail, letting the scan proceed on its own. Philip investigating a noise coming from a lab, finds Rex about to be scanned by the security system. A desperate call to Connor to turn the scan off, arrives too late, and the system shuts down leaving Philip trapped in the lab, and Connor and Jess trapped in the ops room. Philip has written the building management system giving only him security clearance. Stuck in the lab, there is no way to shut it down, and with oxygen being sucked from the lab (a protocol to deal with creature escapes) there is little time before Philip and Rex are suffocated to death. 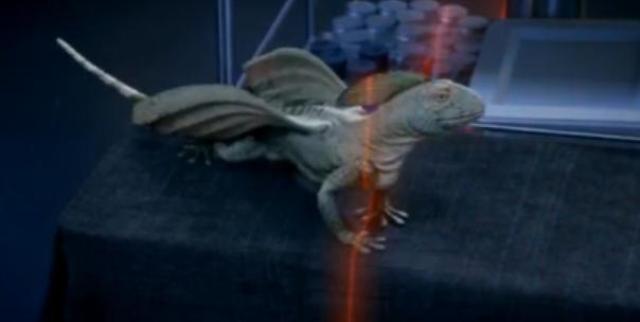 Emily makes her way back to the theatre with Matt following closely behind. She is desperate to find Ethan before its too late (for what?). Before she can explain, a noise reverberates round the theatre; tree creepers are on the loose. Matt and Emily go off on the trail of the escaped tree creeper, whilst Abby and Becker are left to deal with the creeper inside the building. The creeper manages to give the pair the run around, till Abby snares it in the ropes of the theatre ceiling, and sends it crashing to the floor, where Becker deals with it using the E.M.D.

Connor is having no success breaking Philips firewall. In a last ditch attempt to break in, he hot wires a spare computer. In an attempt to keep Philip talking, Connor enquires about Rex,s health. Philip, a little put out by Connors interest in the lizards well being, reminds Connor he should be more interested in his own, Connor retorts “clearly you’ve never seen Abby in a bad mood then”.

Tracking the runaway creeper proves trickier than Matt had anticipated. The creature is well adapted to clamber effortlessly around the outside of buildings to his and Jess Parker’s shock. Finally Matt manages to pass off a shot at the creature, and the resulting burst of electrical energy sends it hurtling through a window.

Nothing Connor does manages to break the impenetrable firewall, until Jess points out that he wrote the original programme. Connor has a brain wave, his original programme had a trap door written into it, and it still works. Philip tries to pass on some information to Connor about “New Dawn”, but passes out before he can elaborate. Connor must enter a password, convinced it has something to do with Abby, on the last guess he remembers “Abby Temple”, and gains the access he needs. The lock down is deactivated, and the pair rushes to the aid of Philip with a medic in tow. A few seconds of oxygen brings Philip round, but Rex is not breathing. Assembling a makeshift oxygen tent, Connor places Rex inside and soon enough the pesky lizard is flying round the lab.

Matt and Emily track the tree creeper to an unoccupied building. A pane of glass stands between Matt and the reptile so his E.M.D gun is useless (the bolt of electricity will not pass through glass). The creature crashes through the glass and attacks Matt knocking the gun out of his hand. Emily throws a nasty smelling concoction from her pouch over the creature, and it bolts making for the nearest roof. The pair, having pursued the beast, find themselves sheltering inside a metal walled shack, while it pulls chunks off the sheds walls. Emily makes two lassoes from some metal cabling, and with some nifty team work the two manage to tie it down.

Breaking loose from its ties, the creeper leaps over the roof wall and to its death. Abby and Becker turn up just in time to witness the animals leap.
As Emily walks off, Matt turns and asks where she is going, “I helped you, now you help me, let me go” she pleads. “I can’t”, Matt replies, “I have to bring you in”.

Abby runs into Matt and Emily in the foyer. Matt begs her to trust Abby and explain why she needs to return. Emily reveals her name is Lady Emily Merchant from the 1840,s. It is imperative they find Ethan, and return preventing any alterations to the time-lines. Becker must not find out, so while Abby keeps him busy, Matt and Emily make their escape.

Connor begs forgiveness from Philip for nearly killing him. In a complete turnaround, Philip apologises to Connor, keeping him out of the team was a mistake, he adds “no one else could have broken through that firewall, just keep that lizard away from me will you”. Connor presses Philip about “New Dawn”, what he was going to reveal to Connor before he passed out. Philip waives it away saying he will explain another time, and walks off.

Matt takes Emily to his home, It’s rather stark and devoid of a woman’s touch in her opinion. Matt walks Emily onto the balcony of his home, and promises her she is safe in his company. Little do the pair know is that Ethan has found himself a place to spy on them, and is hell bent on revenge for Charlottes death.

I hope you have enjoyed this review of episode three, series four of Primeval. Series four Primeval airs in the United Kingdom and the United States each Saturday on ITV and BBC America. Check your local listings for air times.

Stargate Universe: As The Wormhole Turns – Go To The Mirror and "Share The SGU Love" Status Report!

Sat Jan 15 , 2011
Hello again Stargate fans! Well, it’s been one week since my first blog was posted regarding my idea for the “Spread the SGU Love” (or “Share the SGU Love”) fan campaign to help garner positive feedback regarding Stargate Universe to The Powers-That-Be (TPTB) at MGM Studios. So far, what I’ve […] 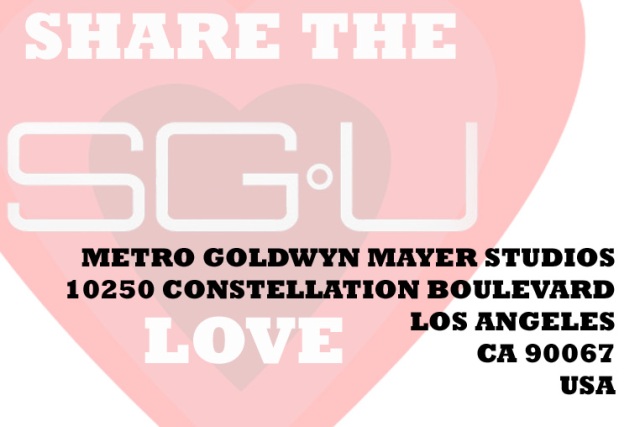