Spoiler warning for United States Primeval fans: This review discusses episode four of Primeval series four. If you do not like spoilers and have not yet seen episode four, please stop reading now. You have been advised.

Special BBC America Primeval promotional prequels for episodes four (below) and five (at bottom) trailer videos are included that will play in either the United States and or the United Kingdom.

A question for Primeval fans: Is every one enjoying Alexander Siddig (Star Trek Deep Space Nine) as the Primeval character named Phillip Burton? I know I am! 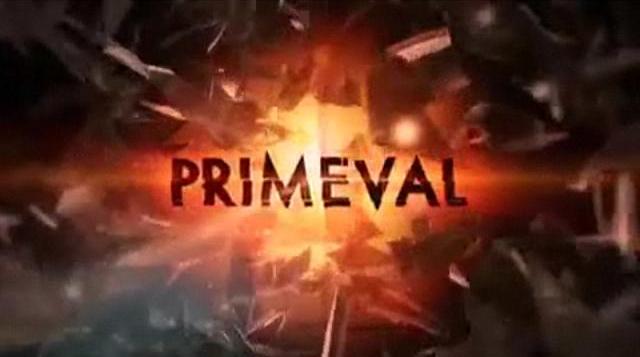 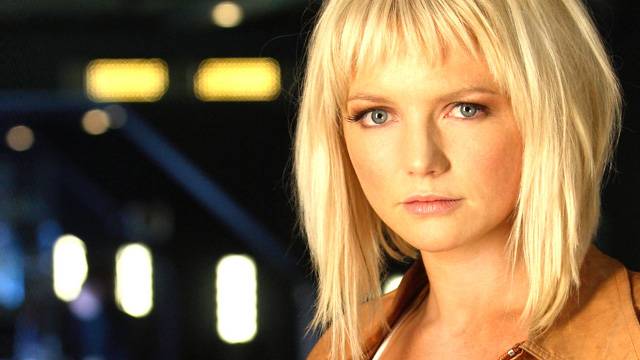 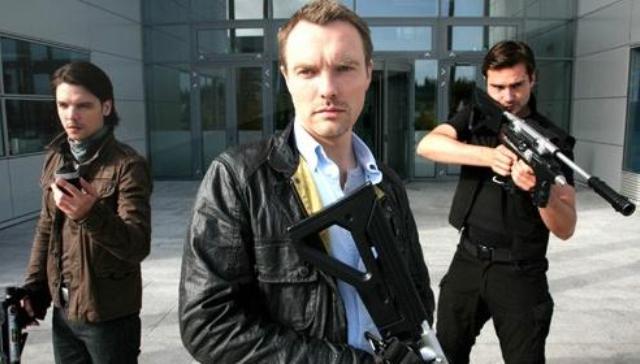 The setting for this week’s episode takes place in a school. A young girl and two young lads are serving their detention in a schoolroom. They are not the happiest of bunnies. The school canteen is the location of the new anomaly. The unimpressed teacher in charge, decides to commandeer a sweet from a snack machine, and for his trouble gets his hand bitten by a new creature. Unable to out run the beast, which also has a venomous bite, he becomes the animal’s first victim. 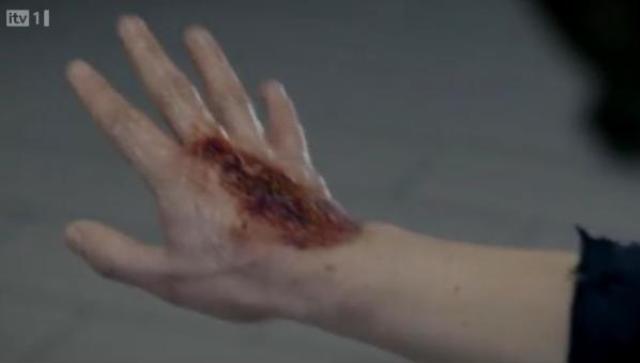 Matt wakes up to Emily trying to sneak out on him whilst he sleeps. Whilst dressing, Matt persuades her that looking for Ethan on her own is a daunting task, and she should trust him. He compliments her on her attire (she is wearing one of his shirts), she remarks “it was all I could find”, and he answers her by retorting all his skirts are in the wash. Emily applauds his sense of humour.

Abby, on her way to a meeting with Philip, is joined in the corridor by Connor, who can’t help but praise Philip up. “Philip rocks, he is like the smartest man I have ever met”. Abby, more philosophical, is wary of Philips interest in her animals. 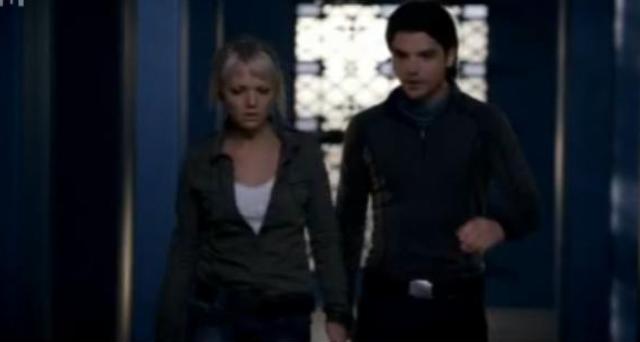 Abby’s sarcasm is proved founded when Philip unveils a new captive creature policy that denotes they should be put down; including Rex. Abby turns to Connor for support, but finds herself alone when he does not raise to her aid.
Before he can explain his lack of support, the anomaly detection device signals the arrival of a new opening.

Still reeling from Connor’s actions, Abby refuses to attend, preferring instead to tend to her animals. Connor and Becker prepare to attend and meet Matt there.

In the detention room, one of the lads tries to hit on the young girl. She dowses his flames of passion with a few well struck insults and walks off. Determined to get their own back, the lads steal her mobile and downloads a track to the schools main server.

The team converge in the foyer of the school, and proceed to hunt down the anomaly. Connor recollects his school days. When pressed, Matt says he cannot remember anything about his school days. It begs the question, what is he hiding.

In the server room, the lads spot Matt’s team from one of the security camera’s. Assuming they will be in trouble, they panic and jam the schools lock-down system.

Following a blood spatter trail, the team locate the teachers severed arm. Connor having split from the team to investigate a corridor finds himself cut off when the lock-down springs into action. Jess struggles to gain control, and determines that the school system has crashed; she points Connor in the right direction to get the system back on track.

Legging it out of the server room, the lads come face to face with the reptile, it is not a pleasant introduction.

Abby concocts a cunning plan; she is going to free her animals from the fatal clutches of Philip Burton. She makes a request of Jess; help her smuggle the animals out of the A.R.C.

Jess spots the creature, and relays its position to Matt and Becker. The lads then come into Jess’s view, they are heading straight into the creatures path. Matt and Becker desperately search for the boys, but they are panicked into hiding from the men.

The young girl has made her way into the gymnasium; trampolining and listening to her iPod, she fails to spot the danger she is about to face. A sudden loud noise disturbs her peace, and she climb off to investigate. Thinking it is the boys out for revenge; she ignores the noises, and returns to the trampoline.

A dismayed Jess spots the creature now lurking in the gym and sends Matt and Becker to her aid. On this occasion they are too late to save the young girl and she is dragged off to her death in the stands of the gymnasium. Distraught by the scene she has just witnessed, Jess refuses to help Abby smuggle the animals out of the A.R.C saying “these animals are too dangerous, I’ve just been handed a major reality check”.

Matt and Becker confront the animal in the gym storeroom. Matt parts company with his E.M.D gun (thanks to the encounter with the creature), and faces a one to one combat with the animal. Arming himself with a heavy metal bar, he manages to reign a few parting blows to the creatures head before Becker finally dispenses with it using his own gun.
Our creature now has a name, Therocephalian: part reptile, part mammal and totally ugly. It will now be known for the rest of this review as Thero.

As Connor is given the job of finding the lads and leading them to safety, Jess views a herd of the dinosaurs ambling through the anomaly. Someone has to get that gateway closed.

Emily has a wander round Matt’s flat; the views from the balcony of London’s skyline are stunning. Hearing a noise, she assumes Matt has returned, instead she comes face to face with Ethan.

Sir Lester walks in on Abby packing for her planned escape. He implores her to stop. Close to tears she justifies her actions. How can they repay the gift and privileges of seeing these creatures by considering them an inconvenience to be slaughtered? “What does that say about the human race”? Sir Lester’s eyes light up, what is he planning?

A meeting with Philip goes unplanned when Sir Lester refuses to countersign the executive order for the animals’ destruction. Sir Lester’s view is that one day, the A.R.C and the anomalies will become public knowledge, and he does not wish to be named as one of the men who signed innocent lives away. Philip is furious, as he will be left with sole responsibility.

Things are not going well in the school. Becker takes the canteen area, matt races off to help Connor track down the boys, who have taken solace in the girls changing rooms; unfortunately Thero has tracked them down, and the boys run off screaming.

Becker gains a visual on the anomaly, but the number of Therocephalians has increased since the last count. As quietly as he can, Becker sets up the equipment and closes the anomaly. Stepping away he backs into a table, and sets off a chain of audible events. The old adage “let sleeping dogs lie” comes to pass when the Thero,s do not take kindly to being woken, and respond by attacking Becker.

The boys find themselves cornered at the bottom of a stairwell. Connor finds them, but cannot help till Jess has the school server back under her control. Just as it looks like the lads will become the next victims, the doors open and Connor flings himself across the boys. Matt races in to save them from the charging Thero.

Having now raced back to the canteen to find Becker, Matt comes across an irate pack of Thero,s, and soon Connor is brought back into the conflict by a worried Jess. Connor instructs the lads to take him to the science labs, where, with their help, begins concocting a “witches brew” of a chemical cocktail.

Matt finally locates an injured Becker: hauling him up, they manage to find safety in a food storage locker. Becker’s bite contains the venom, and in an act to stop it seeping further into his tissues. Matt pours salt into the wound..OUCH!!

With Becker’s wound now dealt with, the pair make their escape right into a pack of Thero,s. There are too many of the creatures, and just when it looks like they will be overwhelmed. Aid arrives in the form of Connor unleashing some pretty effective smoke bombs. Overcome by the contents, the Thero,s fall like flies, and the victorious Connor and team emerge from the plumes of smoke.

Before the lads leave the school, they ask for one last task to perform. They ask to be taken to the server room where they remove the young girls’ video from the mainframe. They do not want to tarnish the young girls’ memory.

An emotionally wrecked Abby stands alone watching her mammoth when she receives a request for her to meet Philip in her lab. Philip has rethought his views on the creature policy, and the animals stay. Philip thanks Sir Lester for his advice adding “ I shall not forget this”. Abby flings her grateful arms round Sir Lester and cries “underneath it all you’re actually quite nice”. Sir Lester (never one to let emotion get the better of him) retorts “repeat that disgraceful slander and you,l be hearing from my lawyers”. He explains that her over fed mammoth once saved his life, and it seemed rude not to return the favour.

Matt returns to an empty flat, all he can find of Emily is her artwork of Ethan. There is however, a tracker device missing; will Matt realise it has gone?

Abby gives Connor the cold shoulder. She is still enraged with his lack of support against Philips creature policy. I hope they make it up for the next episode. The promo trailer is included below for your enjoyment!

I hope you have enjoyed this review of episode four, series four of Primeval. Series four Primeval airs in the United Kingdom and the United States each Saturday on ITV and BBC America. Check your local listings for air times.

Being Human: There Goes the Neighborhood Part 1 with Part 2 Trailer

Mon Jan 24 , 2011
Greetings SciFi Fans! This week Syfy debuted its U.S. version of the very successful BBC series, Being Human. If you like vampires, werewolves and ghosts, then this series just might be for you! To start you off with an overview of the series, here are some of the cast describing […]