After Vala_the_Great’s wonderful overview of episode 1, now its time for me to take over, and recap the rest of series one

; so sit back, and here’s hoping there are no anomalies of the anomalies! 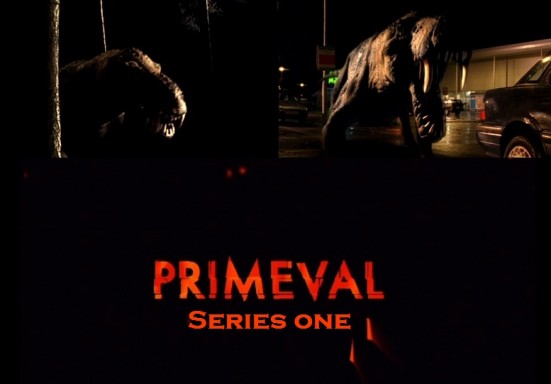 Episode two opens in the London underground….something multi legged is lurking. A young girl moves to the carriage doorway to get in some air, when suddenly she is attacked by an eight legged beast (arachnophobia sufferers, you are in for a treat this episode).

Connor is talking to his college buddies about what he is experiencing; this contravenes the disclaimer made to A.R.C. 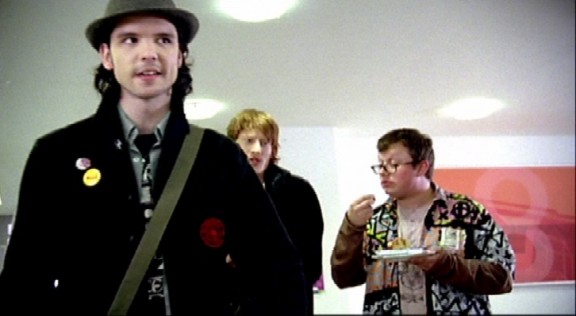 We then see Cutter who is remembering his wife Helen who was presumed dead, after her disappearance in the Forest Of Dean eight years ago.

Abbey is dancing around her flat in her underwear, the heating is on high as she has secretly given refuge to Rex, the flying dinosaur from episode one, due to his habitat requiring a warmer climate. Connor knocks on the door, and after quickly hiding Rex, Abby answers the door to Connors delight, still in her underwear. (Connor has a crush on Abby). He brings the news, that he has possibly found the existence of another anomaly in the New Forest. Connor wants Abby to join him on a camp out to see if they can find anything. Against her better judgement she agrees to join him, without informing Cutter of their intentions. 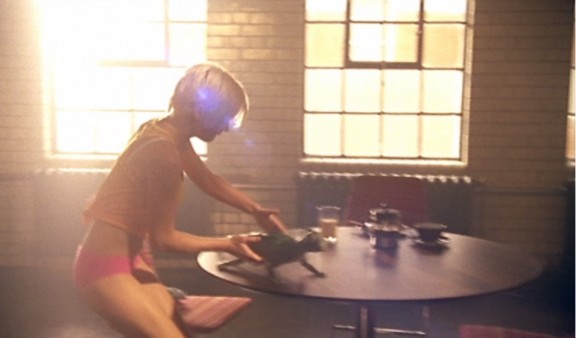 Meanwhile, Cutter is talking to Claudia Brown. He confides in her that he feels responsible for Helen’s disappearance. They had argued over her obsession with her thoughts on new ridiculous theories. Helen was convinced there were no conventional scientific answers to certain evolutionary puzzles. Steve bursts in to announce Abby and Connor’s truancy into the New Forest.

In the New Forest, Connor is trying to work his way into Abby’s affections, in a way which reminds me of Tony (actor Neil Morrisey) in Men Behaving Badly, and unfortunately is having about as much success. (Which is none). 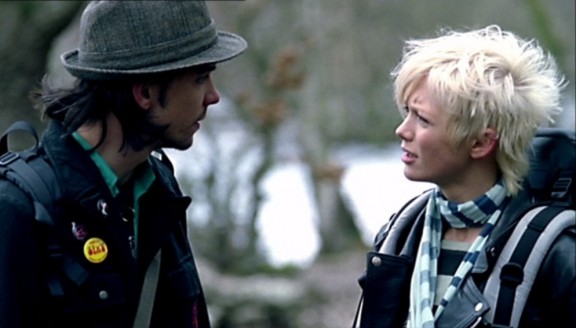 Whilst camped out in the forest, Connor having fallen asleep on sentry duty, wakes to hear a strange noise. Abby and Connor follow it, and it becomes apparent that they are the victims of a college prank played upon them by Tom and Duncan. Police sirens are heard in the background.

Meanwhile back in the London underground, an unsuspecting workman is vermin spraying. A spider surprises him (I would be too) and the worker is bitten, but can it be blamed on the spider? 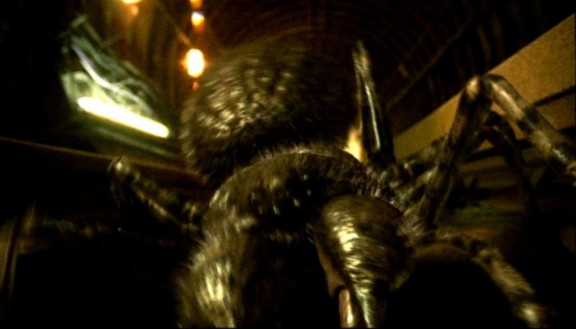 Back in the New Forest, Cutter tears a strip off Abby and Connor, and to Abby’s dismay, sacks Conner on the spot, not only for the foolish stunt, but for his disclosure to Tom and Duncan.

The unfortunate worker is dying from the venom bite he sustained in the tunnel, but what administered the fatal bite. An acrimonious debate between Cutter, Claudia and Sir Lester ends with the cordoning off of the underground station. Cutter wants to go down and investigate, but as the area is cleared of the public, Claudia orders her specialist forces team down to investigate to the dismay of Cutter and Hart. 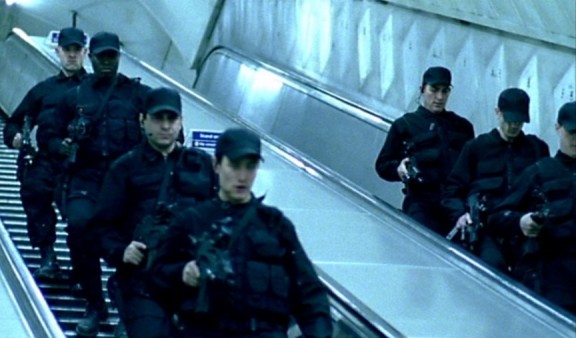 Upon entering the tunnels, they come across a room, where hundreds of eyes are watching their every move. From the ceiling, the spiders attack the forces team and they are forced to withdraw to the surface. After a debriefing from Captain Ryan, Claudia tells them of the workers death, then lets Cutters team begin their search. Armed with torches, they enter the tunnel to find the swarm. Abby disturbs a spider, and asks if anyone has a rather large slipper. After searching the room, Abby find a hole in the fence, and beyond it, the anomaly. Hiding behind some boxes, is a large centipede. The creature attacks and Cutter is cut off from the rest. Hart attacks and Cutter diverts its attention long enough for the others to escape. Cutter runs down an alleyway and thinks he can hear Helen.

After regrouping topside, and realising Cutter is not joining them. Hart steals back down to find him, arming himself with a homemade flame thrower. Scaring away some spiders, Hart comes face to face with the centipede, he scares it away, but it turns and bites Hart. He falls to the ground, and in his stupor, sees Helen who gives him message…Cutter must step through the anomaly to find her.

Cutter finds Hart and together they make it to the surface. Hart is carted off to hospital, and before he goes, he tells Abby she is beautiful, and asks her to dinner. If Hart is to be saved, the doctor needs a sample of venom.

Connor finds its burrow, and after spraying himself with turpentine (a make-shift insect repellent), Cutter, Ryan and Conner begin their descent. The burrow resurfaces in a warehouse, and a systematic search finally comes up trumps. A very unhappy centipede lunges at Cutter, and he is bitten on the arm. In fact, this is just what Cutter wants, as his arm is wrapped in a home made absorption kit. The unfortunate centipede has a very electrifying end. 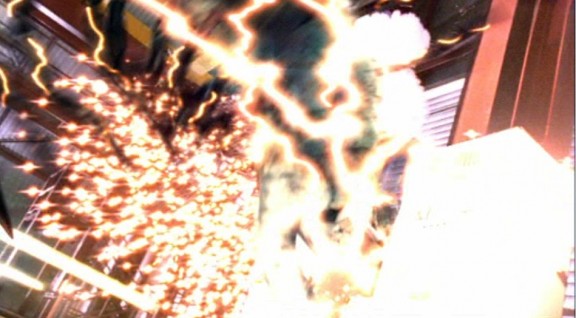 The sample is rushed back to the hospital, and thankfully with the anti-venom Hart makes a full recovery. Abby sits at his bedside, and is upset to learn that Hart remembers nothing of the past from when he was bitten, especially his dinner proposal. She hides her disappointment from him.

Cutter rehires Connor, and at the end, stands in front of the anomaly asking Helen where is she, and what does she want. 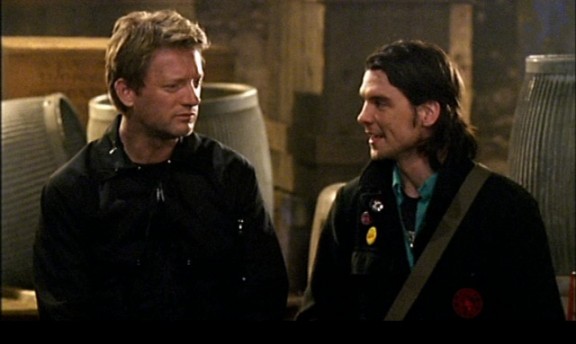 As always thank you for reading and visiting WormholeRiders News Agency. Please feel free to leave a comment or question here or click one of the social media icons below to share this news article.

Fri Dec 24 , 2010
Hello Primeval Friends! Episode 3 Its dinner time! A young man jumps into a swimming pool and cuddles with his girlfriend, she leaves to get changed, the young man goes to make another dive… straight into the jaws of a waiting dinosaur. His girlfriend, hearing a noise goes to investigate, […]