The annual Stargate Fan party, organized and held by Patricia Stewart -Bertrand of

Auroris Entertainment, was full of laughter, chatting, and an all-around great experience which I would not hesitate to recommend to anyone. In fact, if you are in Vancouver next year for the convention, you ought to consider coming into town a day early to attend the fan party. 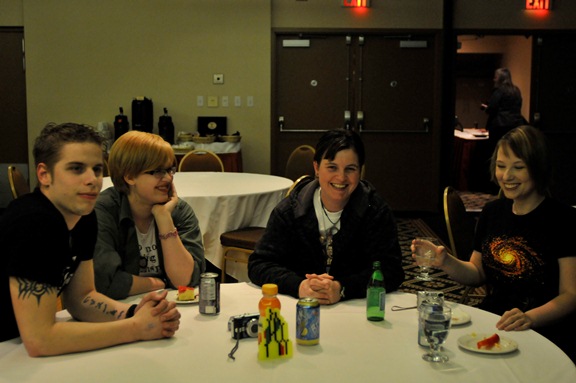 One of the things I enjoyed so much about the party is the small intimate setting – with a relatively small number of fans who had a great time chatting with the guests. Among the guests at this year’s fan party were: Bruce Woloshyn, who was the digital effects supervisor on Stargate Atlantis and SG-1 for numerous years, Crystal Dahl and Christine Willes from Dead Like Me, Genevieve Buechner of, most recently, Caprica, Dan Payne of SG-1 and Human Target, Aleks Paunovic of SG-1, Sanctuary, and Human Target, and last, but certainly not least, Patrick Gilmore and Peter Kelamis of SGU. 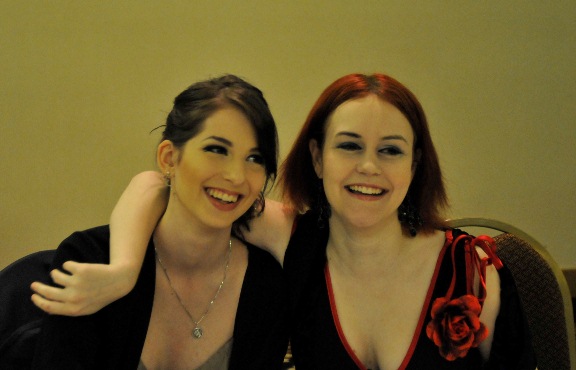 Genevieve and her friend Brianna

Also in attendance as a guest, was Mika McKinnon, who you may recognize as a science consultant for Stargate. I recently met her out at our university as she did a presentation on science in science fiction – with a focus on Stargate. At the party Mika brought glasses with different diffraction gratings which show different colours of the various lights in the room as the different wavelengths are diffracted differently by the glasses. 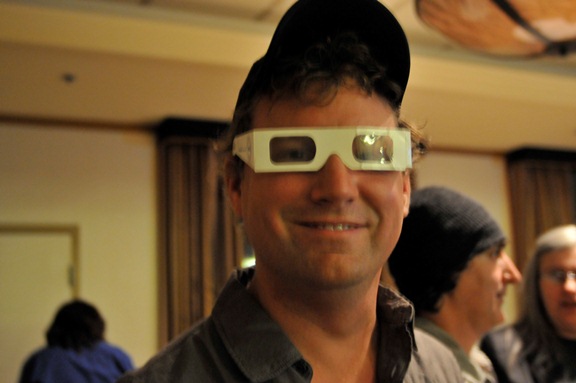 The charity to which proceeds from the night’s auction were donated is a local victim support group and there was a Constable from the RCMP (Royal Canadian Mounted Police) at the party who was happy to chat and pose for pictures. 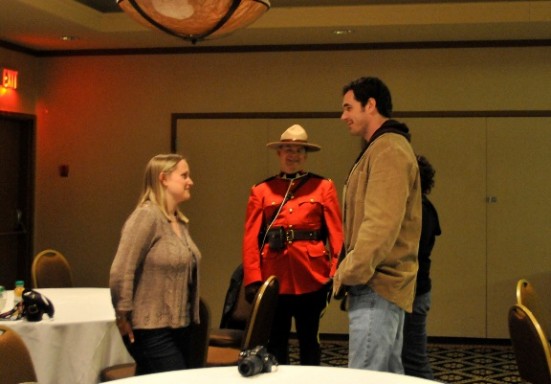 Dan Payne and the RCMP Constable

After watching the first half of an extensive – and hilarious – compilation of bloopers, gag reels, and clips from Stargate, a game of Stargate Jeopardy commenced. Dan Payne administered the questions and hammed it up for everyone. Guests had a great time watching the 3 contestants answering questions and, if none of them could answer, the question was opened to the audience. It was great fun seeing some of the different trivia which people could and couldn’t answer, and the volunteers who set up Jeopardy did a great job coming up with tricky questions. 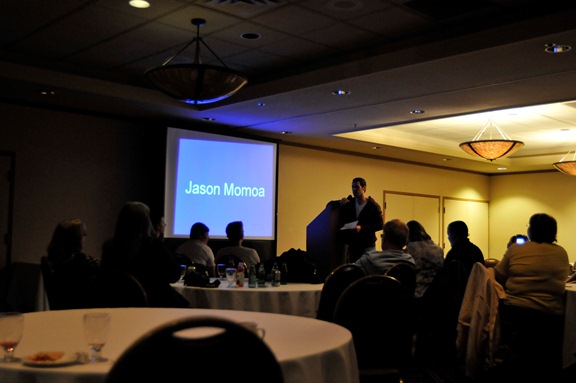 Following the game of Jeopardy, Aleks, Dan, Patrick, and Peter were given paddle-ball toys, and were to compete amongst themselves to see who could keep the ball going the longest. If you have ever tried one of those paddle-ball toys, you should already have an inkling as to where this is going: the basic strategy seemed to be to sit back, shield the face, and fling the paddle-ball around as hard as possible. It really was quite hilarious watching the four guys trying to make the paddle-balls work. 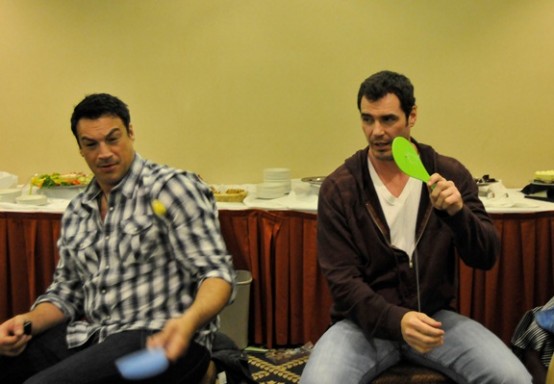 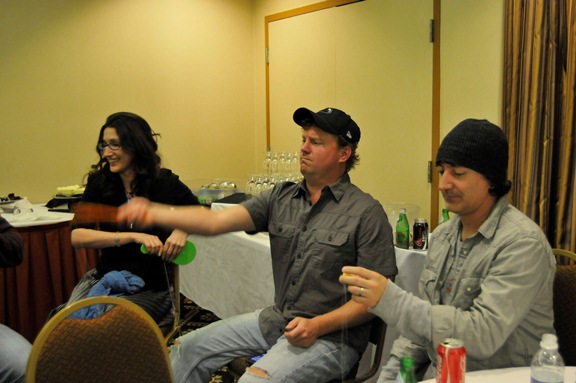 Peter Kelamis and Patrick Gilmore – just look at that concentration 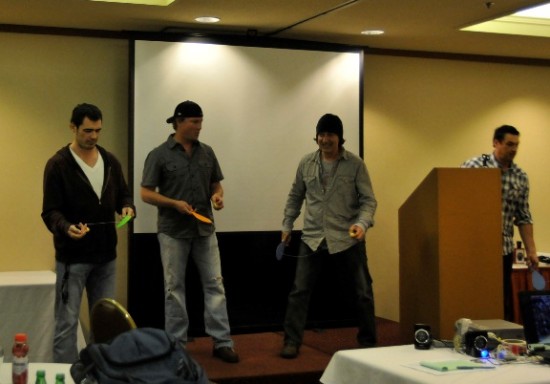 The Competition – it was long and bloody…

I really did have a wonderful time meeting everyone, chatting, and laughing. For me, it was a great start to what will be my first Convention this weekend. On that note, some pictures of me with the guys: 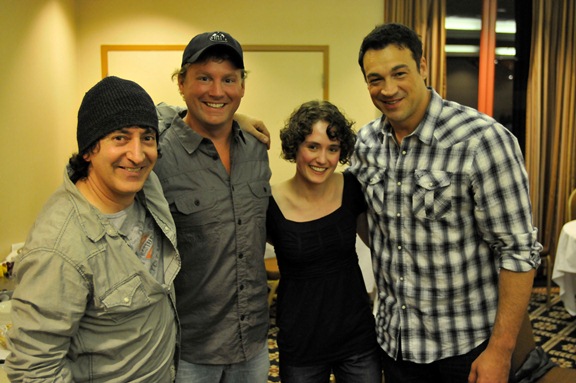 Peter, Patrick, me, and Aleks

Dan was nice enough to snap this great picture for me 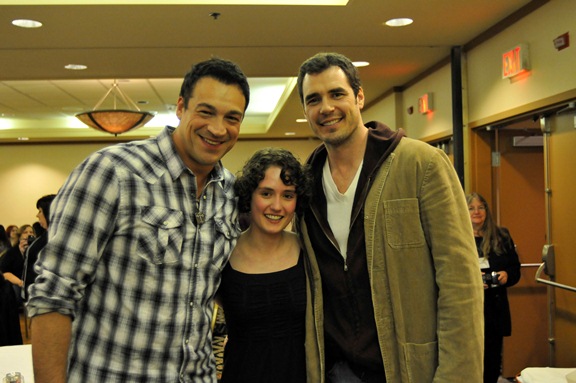 Yes, I felt very, very tiny. Or conversely, these two are extremely tall; they joked about being “bookends”. 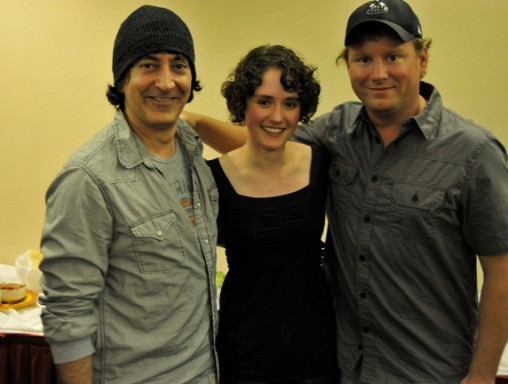 Me with the SGU guys

You would be hard-pressed to find two funnier guys. Seriously. 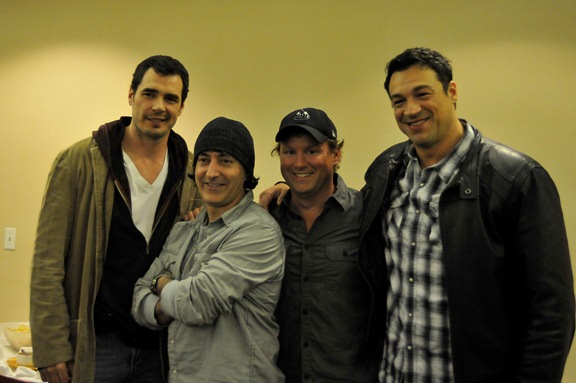 A final group shot before the guys headed out for the evening.

One thing I would like to add is that in the course of chatting with Aleks Paunovic, he mentioned that he has a short film coming out soon which he helped create in conjunction with Tahmoh Penikett, whom you will most likely recognize from his work on Battlestar: Galactica. The film is called “The Hostage” by Aleks Take 29 Productions of Canada.

Thank you again to Patricia Stewart-Bertrand of Auroris Entertainment and her volunteers for putting on such a delightful party and to the guests who attended and showed us all a great time!

If you have any questions or would like to chat about the party, feel free to email me

As always, thanks for reading!
Nadine Ramsden