This weeks episode of Mayans MC is a mind blower with a large supporting cast that weaves an enjoyable pattern of Santo Padre story arc sub plots that will carry our heroes and their antagonists all the way through the end of the season and beyond.

Special focus is paid to two of the fabulous female actors in the series with other important subplots related directly to the Mayans MC now under the leadership of Marcus Alvarez (Emilio Rivera) under the watchful eyes of Canche (Jimmy Gonzales) who demoted Bishop (Michael Irby) to Vice President last episode.

First we have a huge reveal about Emily Thomas, formerly known as Emily Galindo (Sarah Bolger) who seeks to protect her son Cristóbal Galindo (Judah Benjamin) who has been hiding with Emily’s sister Erin (Holland Roden) out of fear that the Galindo Cartel will seek revenge on Emily and her son. Emily does not know that her husband was killed as we the viewers learned last week.

A second story arc plot line in the episode focuses on a series favorite character, Luisa ‘Adelita’ Espina (Carla Baratta). Adelita had learned from Lincoln Potter (Ray McKinnon) that her son is not be dead. We witness Adelita on an undercover mission to track down the details which we will we delineate below in more detail. One thing that all Mayans MC admirers know: Do NOT ever mess with Adelita or you may pay the ultimate price!

The main episodic focus is on the growing tension in the Mayans MC who are tasked with a dangerous mission to fully restore their flow of illegal narcotics that was disrupted at the end of season three. The mission requires EZ (JD Pardo), Angel (Clayton Cardenas) and Manny (Manny Montana) escort a Cartel accountant named Randall (Lex Medlin) out of the United States for safekeeping. Things quickly go from bad to worse with unforeseen consequences that may threaten all of the Mayans chapters, not just Santo Padre!

Before continuing my review, it must be noted that all the actors on Mayans MC are extremely talented in their realistic depictions of the human factors within the series, especially when family and friend interactions are involved with their characters within the story arcs. Bravo to the entire cast! 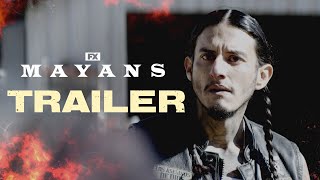 Self Portrait in a Blue Bathroom:

The episode opens with someone viewers will recall named El Banquero (Guillermo Garcia) who is the leader of a Sonora Mexico Cartel called Los Lobos. El Baquero, who was featured in season three, is torturing two men who have stolen a watch from him, hence stealing from the Cartel. Evil El Banquero kills the man who confesses that he stole the watch in order to prove to everyone that he is not to be messed with.

A little bit later we are with El Baquero and his trusted sister who are arguing about the Cartel accountant and money man Randall who is the only person who knows all the financial and secret bank account information about the Los Lobos Cartel. El Baquero says he is too busy to go see their ill mother because of he must get the trusted accountant Randall out of the United States before he is arrested. El Banquero dismisses his sister stating that he will take care of everything and ensures her that Randall will be escorted to Mexico by the Mayans based on his special relationship with Canche that came to fruition in season three.

We segue to Angel and Nails (Justina Adorno) who is cooking a special breakfast for Angel. Angel tells Nails that he loves her and appreciates the breakfast that he wolfs down, but that he must get to the Mayans MC club as soon as possible. We get the feeling, even when Angel kisses Nails on the forehead, that he is uneasy with becoming a father since he has avoided Nails every time she tries to talk about their forthcoming baby.

We move to EZ who is taking Sally (the pitbull) he got from a nice rescue center woman named Sofia (Andrea Cortés) back to the rescue center after Sally shredded EZ’s home.

Based on our analysis of their interaction chemistry, Sofia is almost certain to become EZ’s love interest in season four. Sofia explains that Sally is simply uncomfortable in his new environment sharing a similar story with her daughter who also suffered from anxiety. Sofia sincerely asks EZ to give Sally another chance.

As EZ goes to leave the rescue center with Sally, in one of the lighter and best moments in the history of Mayans MC dialogue sequences ever, Sofia says “Good luck with that one”.

EZ responds with “Thanks I’m gonna need it”

To which Sofia quips “I was talking to Sally”. Sofia and EZ look at each other softly, setting up a potential future romance.

Upon arriving at the the Mayans clubhouse, Coco (Richard Cabral) berates Angel for being unsympathetic to Nails, the mother of his child. Coco barks at Angel, calling him a severely selfish person.

As we know from past interactions between these two, Coco deeply still resents Angel for not helping during his days as a drug addict.

In another great sequence during the episode, we are with EZ’s and Angels’s father, Felipe Reyes (Edward James Olmos), who visits with Nails and notices she is uneasy about Angel, the Mayans and importantly, their pending parenthood. As has often been the case, Felipe brings gifts and warm words of comfort and helps to assemble a new baby crib that Nails had been struggling with. Felipe has always been a comfort to his family and is one of the best character portrayals in the series.

We also learn more about Emily Thomas (Galindo) who traveled by train, then bus incognito, since as mentioned above, Emily doesn’t yet know her husband has been killed and is expecting reprisals. Visiting with Erin, we witness a joyous reunion between Emily and Cristóbal. Emily goes over an escape plan with Erin in case something goes wrong. Emily, as we learned in earlier seasons, has a hefty stash of Cartel funds in numbered bank accounts that will be used to help Erin escape in the short term and ultimately, establish a new life for Cristóbal, Erin and herself.

Earlier EZ met with a person he knew in prison. The man wants to know why EZ had worked as an agent for the United States government. EZ dismisses it as a rumor and wishes the man good luck with his life. A question comes to mind; Will this skeleton from EZ’s life come back to haunt him? It likely will or why did the writers include this scene? Next we see EZ at a board of directors meeting in the Santo Padre clubhouse where Hank (Frankie Loyal) is still mourning the loss of Steve, his Mayans candidate (Momo Rodriguez) who killed himself at the end of season three. It is here that Canche demands that they execute a dangerous mission to ensure that Randall disappears from the United States. This is the ace in the hole that El Banquero mentioned earlier. For the Mayans this means increased drug profits for the club. EZ, Angel and Manny agree to go on the mission, however Bishop has misgivings and gets into an argument with Alvarez and Canche.

Alvarez orders that Bishop be stripped of his status as Vice President and promotes EZ on the spot! Taza (Raoul Max Trujillo) in a show of support for Bishop, resigns his position on the board of directors. Promoting EZ within the ranks of the Santo Padre Mayans. With Alvarez, under Canche’s thumb, humiliating Bishop and Taza, this factor, without doubt will lead to an explosion in the club at a later date. With Bishop and Taza now only regular members, the other Mayans warn Alavarez about the insurrection brewing within the Santo Padre chapter is bad news. Alvarez defends EZ and Manny indicating that they are the bright future for the club after they complete the mission for El Banquero.

Outside, Taza whom is trying to mend fences with with Bishop but finds himself rebuffed yet again because Bishop loathes that Taza is gay. EZ sews his new vice president patch onto his jacket and also tries to talk with Bishop with no luck. Angel comes out to witness Bishops hostility about the rapid changes that just occurred. Before EZ and Angel can talk further, Randall is dropped off by a limo. This is when we learn that Randall has brought his son Noah (Antonio Raul Corbo) that he told no one about. Canche tells EZ, Angel and Manny that Noah is to be taken to Mexico as well

Next we focus on Adelita who has been tailing a man who left his office and is on his way back home. Adelita is first seen in a faded blue bathroom, hence the episode name, getting ready for her task ahead. On arriving at the man’s home, Adelita hears a baby, likely her and Angel’s baby, crying inside. This development sets up a confrontation that will occur in a future episode. Knowing Adelita’s determination, this reviewer doubts the man will survive the encounter!

Out in the desert the five head towards the border to get into Mexico. It is much like what is happening at the United States Mexico border now but in reverse. That night a militia group is seen and the five hide out for the time being.

Manny bonds with Angel sharing about what it means to become a new father. We also learn that a Sons of Anarchy member murdered Alvarez’s son as a revenge hit for another murder Alvarez perpetrated giving the viewers a glimpse into the cold heart of Alvarez

The episode draws to a close with the five seemingly asleep before they complete the mission. Things seem to be peaceful until Angel wakes up and finds that Randall and Noah are missing. Angel looks around and discovers that Randall is molesting his own son and shoots Randall on the spot! EZ and Manny wake up and track down Manny, Noah and a dead Randall, the only person man with all the knowledge about El Banquero’s illegal financial activities. The episode ends with the group knowing that the failed mission is going to become a further disaster when they arrive back at the Santo Padre compound!

Until next week, we leave you with an inside look at the real life of one of the great actors of the series, Joseph Raymond Lucero, who portrays Neron ‘Creeper’ Vargas in Mayans MC. The featured video includes commentary from  JD Pardo. Enjoy! 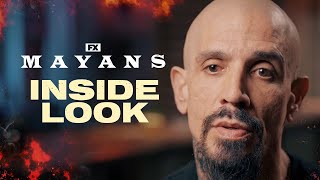 Mon May 9 , 2022
Hello my fellow Mayans MC fans, We are back again with another review.  Season 4 Episode 4 is entitled “A Crow Flew By” was directed by Michael D. Olmos, son of the patriarch of the Reyes family, Edward James Olmos. It was a quieter episode than the previous ones. More […] 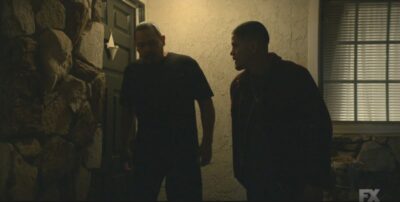