The fourth season opens with a literal bang as war within the Mayans occurs between the Santo Padre and the other factions including the Sons Of Anarchy and Yuma that erupted subsequent to the events that happened at the end of the season three episode “Chapter The Last, Nothing More To Write“. The fabled motorcycle club appears to be headed to destruction in an episode that was so exciting that viewers were the edge of the seats the entire time!

Before beginning my review and analysis of “Cleansing Of The Temple”, a look back on how Team WHR fell in love with Mayans MC. Back in July 2019, during San Diego Comic-Con, our Senior Editor Lori and I were having dinner at our hotel discussing our upcoming interviews and the panels that we would attend that year. Lori shared with me that she had become an admirer of an FX Networks series called Mayans MC and invited me to begin watching the series.

I was reticent since we had primarily focused on science fiction series and movies in the past decade. Lori shared that the program featured notable celebrities including Edward James Olmos from Battlestar Galactica, JD Pardo of Revolution, and Sarah Bolger who I had heard of and admired from a parallel universe series called Counterpart. All well known science fiction series, this piqued my interest since WormholeRiders has a reputation of following science fiction series celebrities, producers, directors, and writers over the years through their ongoing careers.

I made a commitment to begin watching the series in season two if Lori would fill me in on the story arc, mythology and the events within Mayans MC leading up to the next San Diego Comic-Con in 2020 which ended up being cancelled due to the pandemic which continued through to a cancellation of Comic-Con 2022. As a result, I completely forgot about covering Mayans MC for the time being.

Later that year, with the series garnering impressive reviews and Lori sharing details about the fascinating stories and characters, I began watching Mayans MC. I was not disappointed and committed to begin coverage by the end of season three and gleefully tweeted along with the series, actors, Lori and the fans each week. What really interests me is that the Mayans MC series focuses on relevant contemporary issues such as the growing illegal drug trade, the southern United States border crisis, and critically the family lives of the individuals on both sides of the border within the series that are caught up in these tumultuous events. It was at this point that a decision was made that we would provide full coverage of each episode for the current fourth season. 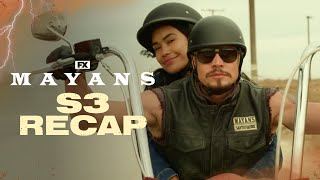 Cleansing Of The Temple:

The episode opens with a brief recap of how we arrived where we find ourselves. The traditional introduction video of the Mayans has been omitted for this episode. The action starts immediately with the current crisis that began when Ezekiel ‘EZ’ Reyes (JD Pardo) attacked the rival Yuma and Sons Of Anarchy factions with an explosive device at the end of season three that began the war among the members of the various factions of the Mayans MC.

We learn that the other Mayans factions are just outside the gates of the Santo Padre Mayans ready to launch an attack. The Santo Padre Mayans scramble to the inside of their club house. We find Bishop (Michael Irby) had not finished shooting Taza (Raoul Max Trujillo) as we thought at the end of the third season because of bad blood between them. Tussling on the ground fighting over the gun, both Mayans also head inside where we hope they will survive the coming onslaught.

As the battle begins in earnest, Hank (Frankie Loyal) takes a bullet to the leg as other younger members of the Mayans are killed in the fusillade of bullets. The Santo Padre Mayans discover that the gun locker has been nearly emptied, unaware that Coco (Richard Cabral) was in the truck that had them. Another member had loaded almost everything into the clubs from the gun locker earlier for the attack EZ had executed on Canche’s (Jimmy Gonzales) clubhouse that resulted in the death of many Mayans and injury to Canche’s son.

During the pandemonium inside the club house, Bishop smashes the cell phone of a young panicked woman in the club who is trying to call the police which is something that is absolutely forbidden by all Mayans regardless of faction. The young woman tries to flee the club screaming and is shot to death by the other Mayans outside. In this sequence we observe that Bishop appears to be shaken by events and is unable to lead the group effectively.

On the other hand, EZ who has become more mature from all he has been through, begins to take steps to fight back while Bishop, Angel (Clayton Cardenas) and expectant father shelters the pregnant mother Nails (Justina Adorno), his lover. With Bishop obviously on the verge of panic, EZ takes control in a calm fashion when a woman at the bar suggests that they “fight fire with fire”. EZ and the woman  prepare Molotov cocktails, head to the roof under heavy gunfire and launch a bunch of fire bombs at the other factions which drives them  back.

While EZ delivers counter attacks with Molotov cocktails’s, Creeper (Joseph Raymond Lucero) is able to get into a truck in the yard and rams the people from the other factions who are trying to break into the Santo Padre compound. Creeper is riddled with bullets in the process nearly sacrificing himself for his Mayans comrades while Angel, who was was supposed to go with Creeper had stayed back to protect Nails.

We segue back to Coco and his ally Gilly (Vincent Vargas) who had gone to rescue Coco from the meth drug encampment that held him captive until the end of Season 3. Both retreat and enter the clubhouse through the back gate. It is here that Gilly covers for Coco who tells them the reason he was not there was his daughter was a drug addict which is the exact opposite of the truth. Coco is able to get away with his lie for the time being.

The Santo Padre Mayans are low on ammunition after killing several members of the opposing factions. Outside, undaunted, the other Mayan factions begin taunting EZ that they know what he did and have seen him inside. EZ surveys the situation knowing that things are falling apart and decides to ask Canche to spare the others if he turns himself over. EZ walks out and surrender himself to Canche. Suddenly, and somewhat unexpectedly, all the Santo Padre Mayans follow suit walking out to surrender behind EZ. We are shocked that this may be the end of as EZ gets hammered with a rifle butt by Canche!

Canche has every member of the Santo Padre charter on their knees, ready to be executed. He calls out the names of Mayans brothers that were killed as a result of EZ’s and Santo Padre’s actions the night before. Just before the mass execution begins, Marcus Alvarez (Emilio Rivera) emerges to proclaim that he is king of Mayans, kills the gunman about to shoot Angel, making his triumphant return to leadership of the Mayans MC. Not one member of the Mayans opposes Marcus despite his absence from recent events. The first episode of the two episode premiere concludes with Marcus clearly establishing the Mayans MC is, and always has been his domain.

We will return before the third episode is broadcast with our review of the second episode in the premiere “Hymn Among The Ruins” when we learn the fate of other characters in the Mayans MC saga! See you for the live tweet party next week! 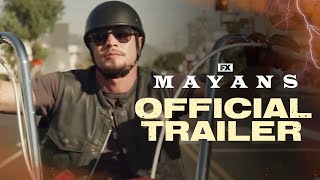 Mayans MC Review Hymn Among the Ruins - Picking Up The Pieces Again!

Mon Apr 25 , 2022
Hello, my fellow Mayan MC fans, It is great to have the series back again for the fourth season! Elgin James, the showrunner, wasted zero time with niceties and jumped in full throttle to not one but a two-episode premiere. To say that it was memorable is an understatement; it […] 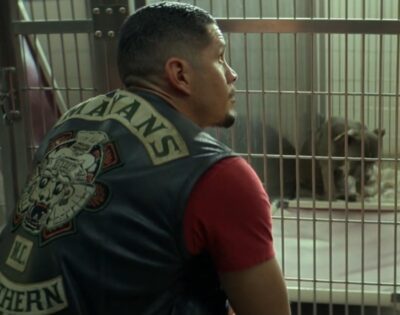