It is great to have the series back again for the fourth season!

Elgin James, the showrunner, wasted zero time with niceties and jumped in full throttle to not one but a two-episode premiere. To say that it was memorable is an understatement; it was mind-blowing, head-spinning, jaw-dropping action-packed realness. It was like an old-time Western shoot-out, and the Samurai massacre rolled into one. You can read all about it here from Kenn as he covered the first episode, and I was tasked with episode 2 titled “Hymn Among the Ruins,” which opens four months after the fateful events of the first episode.

During those four months, a lot has happened; the first shocking thing I noticed was that Bishop (Michael Irby) was demoted to Vice President. I had to double-take to ensure I did not see things. With Marcus Alvarez (Emilio Rivera) taking his place at the head of the temple and his place as President, Bishop’s place was usurped. It makes sense since Bishop had been struggling since we last left him at the end of Season 3.

The chaos that had been brought on the club by the actions of not only Bishop but Ez (JD Pardo) made the switch in power necessary.

With the club now integrated with some of the other factions of Mayans, it seems as if the club has been fractured. Secrets and lies, among other things, will contribute to the problems the club will face this season. I do not doubt that we will see members of the club rise, fall, and shift the power struggle to their advantage or their detriment.

Hymn Among the Ruins:

I am happy to see that almost all the same cast is back, with a few new additions. One cast member missed is Danny Pino, who portrayed cartel boss Miguel Galindo. This episode revealed Galindo was killed in Mexico but did not get more details.

Danny Pino brought Galindo to life with a swagger and intelligence that gave us a glimpse into the “other” side of the drug trade. Whatever the reason for Pino’s departure, I wish him well and look forward to whatever project he has coming down the pipeline. This marked the second time he has worked for Kurt Sutter with Mayans and hopefully won’t be his last.

Speaking of Galindo, we get a small scene with Emily Galindo (or Emily Thomas as she is going by now) played by Sarah Bolger, who went from her blonde hair to brunette. It was a stark change from her privileged life with Galindo to now having to fend for herself in a new town and new life. I hope we can see more of Sarah (Emily) in the show as she has always been a favorite character of mine (unfortunately, I am in the minority on that). Sarah also brings a beautiful take on Emily; I am also hoping that we will see Ez and Emily either reunite (as some fans are hoping) or at least be able to be back in each other’s lives as friends.

For the rest of this review, I will be focusing on the parts that I think are the most significant. Not to discount the rest of the episode, but I love this series because of the writing, acting, and issues that the writers address. One of the significant thought lines that this show has always addressed and has not shied away from is trauma, how trauma shapes a person/character, how it manifests, or how it informs how that character lives the rest of their lives. We have all had trauma in some way, shape, or form, so we, as the viewer, can relate to that character because of their trauma. It may not be the same traumatic situation, but similarities or parallel problems help understand that character more.

From the beginning of the series EZ (JD Pardo) has been the focal point of this fabled story. We pretty much see the club and the life through his eyes. EZ has never had it easy since he went to jail and subsequently became a Mayan. It is no coincidence that he lives in a worn-out trailer with minimal possessions. It is no surprise that when he is in that said trailer, he feels a bit more complete and himself. His isolation away from the club in that manner has always highlighted (at least for me) why EZ is the way he is, why he has always been the “golden boy.” He has always been different, and yes, he may be in a motorcycle gang, and his life has taken a drastic turn he never thought he’d take, but EZ, like Lazarus, metaphorically rose from the death of his former life to his current one.

After each trauma, EZ repeatedly rises, re-birthing another version of himself. By retreating to his sanctuary of the trailer, he can find that part of himself that is still buried deep within his broken soul. EZ’s brother Angel (Clayton Cardenas) visits EZ and tells him to stop hiding out and maybe get a dog. My favorite parts of the series were when we were able to get a flashback to the life EZ had when he was in prison and see the brutality of his life behind bars. When we see those flashbacks, we see JD at his finest; his acting is visceral. JD can physically show us that trauma to make us feel it ourselves. It is a rare gift that an actor can do; it takes real skill and discipline to achieve that.

Another subject I am glad the writers are tackling is addiction and recovery.  The scene with Creeper (Joseph Raymond Lucero) was also great to see. It showed him in a recovery meeting talking about his struggle.  Again, trauma played a part in that scene as Creeper went to the meeting AFTER the events of episode one. No doubt the stress and changes were triggers for him, and instead of allowing his demons to take over, he took steps to remedy the situation.  That scene with Creeper normalized reaching out for help; it made it okay to say help is not a bad thing. I like to see we give minor characters a bit more screen time, and we get to see more of their stories.

With this new season of Mayans, the writers decided to give EZ a new love interest or maybe two. EZ goes to a shelter and finds a sweet pitbull, who seems to have given up and shut down. As soon as EZ sees her, he relates entirely. He knows how that feels, being locked up, lonely, terrified, not knowing if you will ever be let out, if you will ever be loved again.  A worker at the shelter (Andrea Cortés) mentions the name Salomé (Sally for short), which EZ thinks is her name when it is the dog’s name. We do not get to know her name, and hopefully, we will find out in later episodes. It is no coincidence that the writers gave the dog the name Salomé which means “peace,” and that her new dad, EZ, could use some peace in his life. Fans are thrilled to see EZ get a new “love” interest in Sally, and I feel they will be each other’s salvation.

We also were introduced to another character named Manny (Manny Montana). I feel we will be seeing much more of him and that he may be a significant part of the changes that happen in the club. Definite changes are happening within the club, alliances that once were are now shattered, and the secrets that are still being held will eventually destroy the foundation of the club and the members involved. Will Taza’s (Raoul Max Trujillo) bombshell reveal at the end of Season 3 finally be exposed, or will Bishop keep it to himself, knowing the consequences that will befall him and Taza?

Toward the end of the episode, a shocking part ties back to the previous season and the re-introduction of the Sons of Anarchy club. That reveal will play another crucial role in the future of the Mayans. I am purposely omitting what the reveal is because I want the viewer to be as shocked as I was. All I will say is that things will get more volatile than usual.

So far, season 4 has not disappointed, and I feel it will only get better from here. I am looking forward to more action and a deep dive into a character that Mayans are known for. I am hoping that we will see more from Edward James Olmos (Felipe Reyes), Carla Baratta (Adelita), Richard Cabral (Coco Cruz) and Emilio Rivera (Marcus Alvarez).

Until next time Mayan fans, we leave you with a preview of the third episode of season four “Self Portrait in a Blue Bathroom” for your enjoyment!

Fri Apr 29 , 2022
Welcome Back Mayans MC Motorcycle WormholeRiders, This weeks episode of Mayans MC is a mind blower with a large supporting cast that weaves an enjoyable pattern of Santo Padre story arc sub plots that will carry our heroes and their antagonists all the way through the end of the season […] 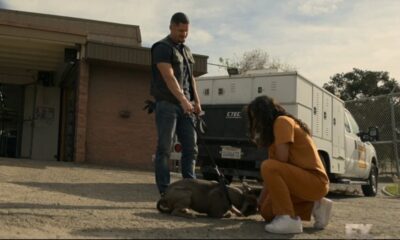