We are back again with another review.  Season 4 Episode 4 is entitled “A Crow Flew By” was directed by Michael D. Olmos, son of the patriarch of the Reyes family, Edward James Olmos. It was a quieter episode than the previous ones. More modest in the sense that the brutality of the first two episodes was not as present in this episode. We were able to find out a bit more about the other characters and see another shift in the club once again.

With the incidents that happened during the dessert, the foremost question at the table, EZ’s (JD Pardo) leadership skills, comes into question. Was it wise to promote him to Vice President? Yes, he did the right thing, and Manny (Manny Montana) backed him up and validated his decision. Canche (Jimmy Gonzales) is not happy with the alliance that EZ and Manny are temporarily forming; he lets it go…for now. I feel that Canche hoped that Manny would somehow be an adversary to EZ and destroy him to gain the upper hand. I think Canche may be underestimating both men and not realize that they make a formidable team.

One of the best parts of this episode was seeing Nestor (Gino Vento) as the new Prospect of the Mayans. I am happy to see him back in the fold and use his skills to help further the club.

There are characters in television shows or movies that you love seeing and always hope to see more of. Nestor is one of those characters. He went from the right hand and muscle of Miguel Galindo (Danny Pino) to a parking lot security guard to now a prospect in the MC.

That is one heck of a journey, but it needed to happen for Nestor to be re-born again. Plus, Nestor probably has a good deal of knowledge about what Galindo was up to do and may be able to help the club on that end.

I think that Marcus (Emilio Rivera) sees Nestor like a son, and by giving Nestor a third chance, Marcus is somewhat redeeming himself for what happened to his son. If you are a fan of Sons of Anarchy, you know what happened to Esai Alvarez (Kevin Alejandro). In this episode, we also see Marcus test Coco’s (Richard Cabral) ability to follow orders without question when he sends Coco on a mission to Oakland, California, leaving Hope (Vanessa Giselle) standing alone on a street after work. 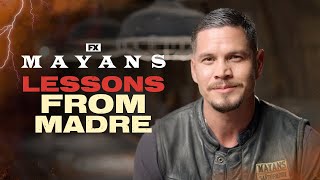 A Crow Flew By:

A figure rose from the proverbial dead (mine included) to everyone’s surprise. From what viewers were told, Miguel Galindo was killed, but he is most certainly not dead from what we see. It was great to see that Danny Pino had not left the series and is alive and well, just incognito, in a convent in Mexico. We saw Miguel as he is now a far cry from what we had known of him in the past seasons. No more is he wearing his designer suits, riding in his fancy cars, living in his plush mansion. No longer is he a man of privilege and wealth; we now see a heavily bearded man doing manual labor, something I doubt Miguel ever did in his life up to that point.

The convent scenes with Miguel and his Aunt, the Mother Superior (Renee Victor), are some of my favorites in this episode. It seems as if Miguel is hiding from the cartel. His Aunt keeps asking him to cleanse somehow his soul of all the evil doings he has done throughout his reign as cartel king. To wash away the sin of almost killing his wife over a lie told to him by his late mother, Dita (Ada Maris). With the cartel in Mexico still looking for Miguel, it is no surprise that we see a garrison of men with guns try and storm the convent looking for Galindo. What those men run into is a wall of black and white. The nuns have all formed a human wall to keep them out and shield Miguel from the men. Mother Superior tells the leader Miguel is not there, and they don’t know where he is. She essentially puts the fear of God in him, and the men retreat with promises to be back. As someone who went through 12 years of Catholic school with nuns from Ireland, I can attest that they are imposing women who, even at 4’11”, can make the mightiest man fall to his knees in absolution.

Watching Bishop (Michael Irby) go down the rabbit hole of drinking and drugs with Treenie (Augie Duke) is hard to watch. Bishop’s pain since last season has been festering, and I fear that it will only get worse. I fear that Bishop will destroy himself and somehow take down the club with him or at least a few members who are still loyal to him.

Marcus giving EZ the bylaws book is a turning point in the episode. Not only will it change the game, but knowing EZ and how his brain works, he will find a way to help the club. I feel that the writers are gearing up to make EZ the one true king of the Mayans. The one that takes over from Alvarez and rules how it used to be run.

Edward James Olmos is not used as much as he usually is, but in a way, that’s okay. When you see him in a scene with another character, those scenes are short but speak volumes. Most of his scenes now have little dialogue, but it is more about what is NOT being said. The beauty of an actor like EJO is that he has been in this business for so long and worked with the best directors that there is little a director has to do with him. His instrument is honed, and he knows how to play a scene; plus, he has such an expressive face that just the look in his eyes tells you everything. I think his sins are coming back to haunt not only him but also his sons. It will be interesting to see how that plays out.

I am happy that the writer of this episode (Sara Price) is still keeping with showing us the other characters and their pasts. It was great to see Gilly (Vincent “Rocco” Vargas) visit his old military buddy and joke around at a kid’s birthday party with his buddies. It was nice to see Creeper (Joseph Raymond Lucero) enjoying himself with a friend from his meetings.

Seeing these characters differently has given the show an elevated feel. It lightens it up from all the darkness that is usually part of the series. My reviews of the series will not focus on every aspect of the episode, but on the parts that I think are the most significant.

For example, in one of the last scenes where EZ goes to Padrino’s house to talk to him about the “kill switch clause” in the bylaws. “Any president can be overruled or removed, but you have to vote unanimously” is what the kill switch law states; EZ wants to make sure this never happens again. He wants to make sure that the hierarchy in place now stays like that. He does not wish Canche to usurp anybody or rally the other factions of the Mayans to vote against Alvarez. Thank goodness EZ has the brains because he would not have made the right decisions with the emotional state that the Bishop is currently in.

I am pleased about the next few episodes. With the tease of Tig (Kim Coates) coming back into the fold, the two worlds of Charming and Santo Padre will be colliding. I do not doubt that the remaining episodes will be unforgettable for sure. We did not see either Emily (Sarah Bolger) or Adelita (Carla Baratta) in this episode. Still, I feel things will get desperate and possibly deadly for those two women. I do not doubt that both incredible actresses will bring their A-game and leave us breathless as they have done in past seasons.

Only six episodes remain in this season, and I am both happy and scared to see where the writers will take us. There is so much going on, so many different directions the show can go. I believe the writers and actors will bring us to heaven, hell, purgatory, and back again. I am looking forward to what is to come as shown below in the episode five “Death of a Virgin” sneak peak. No matter what happens, I will enjoy the ride! 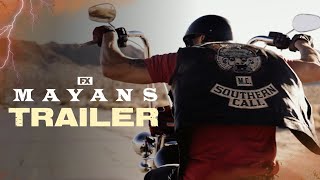 Sat May 14 , 2022
Welcome Back Mayans MC Motorcycle WormholeRiders, As we approach mid season of Mayans MC, the circumstances and challenges that several main characters are dealing with comes into focus for the admirers of the series. Each of these challenges revolve around family or interpersonal issues that almost everyone can relate to […] 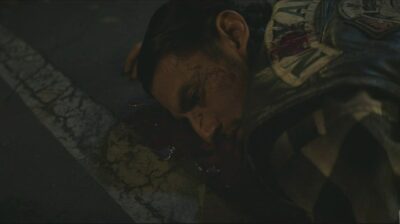