Welcome back once again Fringe fans!

Fringe .. Really could not start this review without a discussion of ratings. For some in the fandom, despite the clear and evident signs that a renewal was a virtual certainty often with hints from and by TPTB of the series itself, people appeared to be on the verge of panic. No matter what was tweeted, or who stated it, many of the Fringies felt that the series was about to be canceled.

Buffeted by over a month of SERIOUS problems in the real world, (Egypt, Japan, Libya, revolution, riots, earthquakes, tsunami and a nearly unprecedented nuclear disaster), television ratings plunged across the board for a wide array of programs. The only apparent exception was news programs world-wide. Many Fringe fans seemed on the verge of panic and obsession the series was going to be canceled. Not correct!

Let’s try and set the record straight: Television ratings are an important factor, a very important factor. However such are not the only determining factor as to whether a series will be either renewed or placed on the shelf.  People who look at ratings with tunnel vision without considering the larger picture are likely to draw incorrect conclusions every time.

Rejoice Fringe fans! The series has been renewed and now be at peace like when Nina Sharp (Blair Brown) discusses facts with Walter! 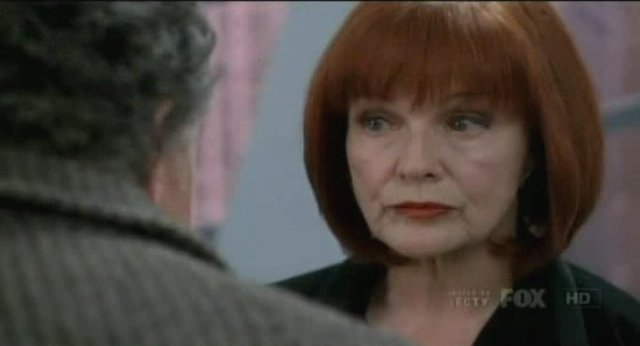 Now let us take an analytical look at the Fringe episode “Stowaway” directed by Charles Beeson. A watershed episode that deals with obsession, “Stowaway” features Anna Torv taking on yet another persona none other than William Bell (Leonard Nimoy). Fondly referred to as Bellivia by many in the fandom, the hidden persona was secreted away using “Soul Magnets” during Olivia Dunham’s (Anna Torv) time on “The Other Side” apparently while in William Bell’s office during “tea time”. We observe Bellivia is the lab with electrodes attached to her skull! 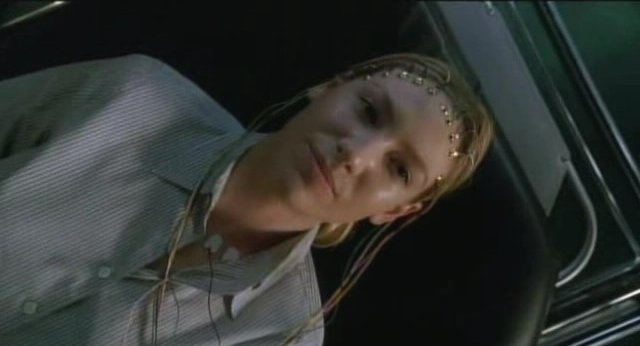 Those who have followed the career of this brilliant young Australian actress know that Anna Torv is extremely gifted. Her portrayal of a male character is superb and a delight to behold! During the opening sequences we witness this brilliance as Walter Bishop (John Noble) giggles with glee that his old friend has returned. The body language, voice intonation and facial expressions of Bellivia are wonderful. Another fantastically great performance by Anna Torv? You bet! 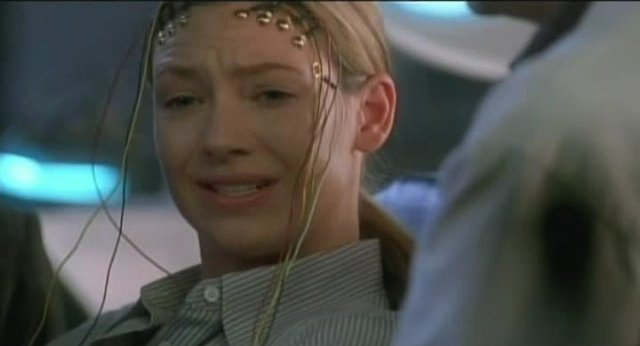 Other main Fringe characters including Peter Bishop (Joshua Jackson), Phillip Broyles (Lance Reddick) and Astrid Farnsworth (Jasika Nicole) are not quite so pleased that Olivia’s body has been hijacked by William Bell for his agenda regarding Massive Dynamics.  From an analytical perspective the plot twist is perfect! Why? Since in real life we have been informed that Leonard Nimoy has announced his retirement from film and television production we will need a new body for William Bell! Or has he really retired and will we need another body? 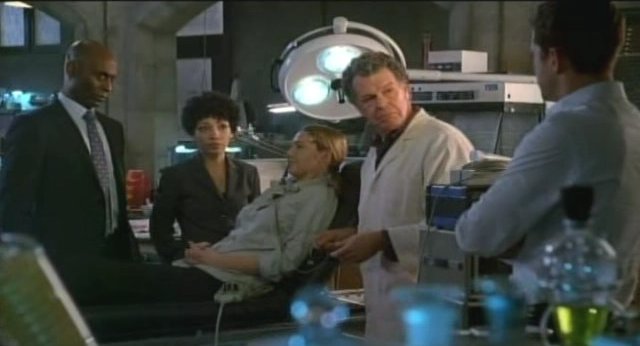 During his recent appearance at the Creation Entertainment Star Trek convention in San Francisco, Mr. Nimoy did not take questions during his 90 minute panel in which he opined about his six decade career. Was this because he may return as William Bell in his old friend J.J. Abrams production of Fringe?  We are not sure because there was no question and answer period. What we do know about “Stowaway” is that Bellivia states he needs to find a suitable repository for his conscience mind! 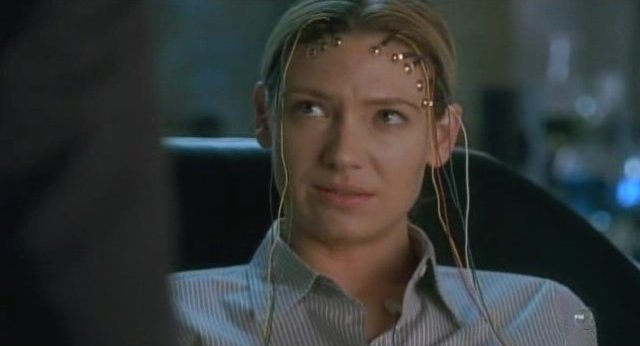 Naturally there must be a Fringe event of some sort for an episode of Fringe to be complete. On a parallel story arc we segue to a roof top where we find Dana Gray (Paula Malcomson) is on a bit of soul searching mission of her own. And not without consequences I might add. Her discussion that “every drop of rain holds a purpose of regrowth” is a bit disturbing. 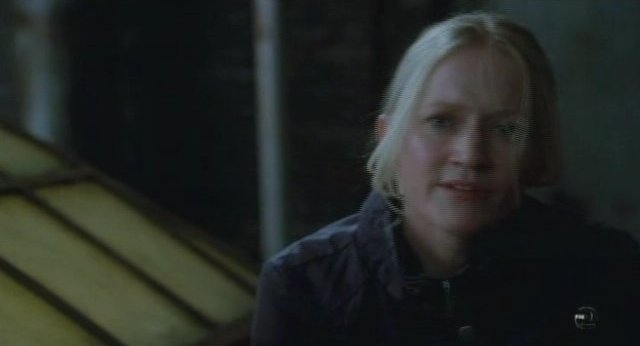 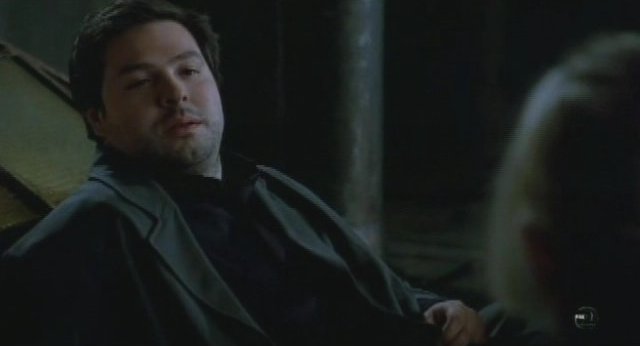 During a poignant moment a poor soul is observed going over the side of a building to his death. We observe Dana Gray who goes over the edge with the victim apparently suffering only a bloody nose. Obviously there is some connection with the deceased, her undisclosed purpose. He crashes to his death but there is no damage to Dana from her smashing a perfectly serviceable automobile in the process! 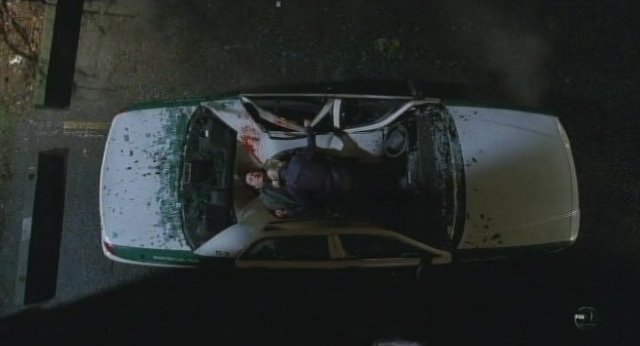 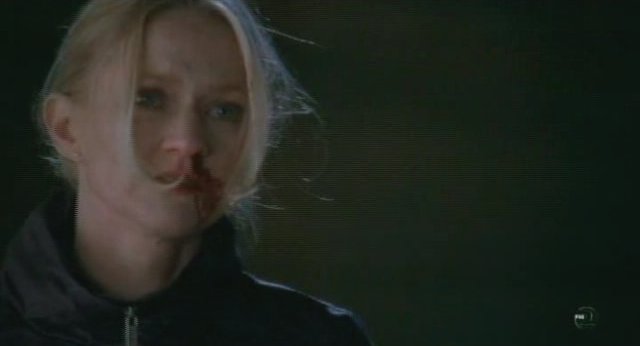 At this point we finally get to meet the analog of Special Agent Lincoln Lee (Seth Gabel) in our universe reality. Lincoln has been sent to investigate the circumstances informing the team that Dana Gray was murdered but that her body disappeared from the morgue.

Naturally no Fringe episode is complete without an Observer sighting. The sighting occurs during this sequence as illustrated below .

Further discussion reveals that Dana Gray did not perish on the horrific murder of her family during a home invasion. Called by Bellivia and Walter to the lab, we are also re-introduced once again to one of my favorite characters, Gene the Cow! During the typical moments of John Noble humor, Lincoln Lee asks who Gene is? Walter quips about Gene and in a sequence of unreal hilarity Lincoln is observed looking around the lab in disbelief. What is Gene doing there? Well for goodness sakes people WE KNOW what! How is Walter expected to make fresh milkshakes without Gene! 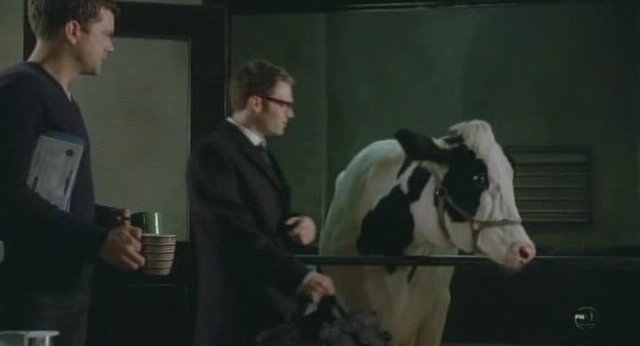 A discussion into magnetism ensues with Bellivia likening the purpose of the elusive Fringe event character Dana Gray as being drawn to certain types of individuals for as yet an unidentified purpose. We follow the action to a center for disturbed souls where we meet Lucy (Catherine Lough Haggquist) who is helpful in ascertaining the identity of Dana Gray from her interaction with various patients she “helped”. 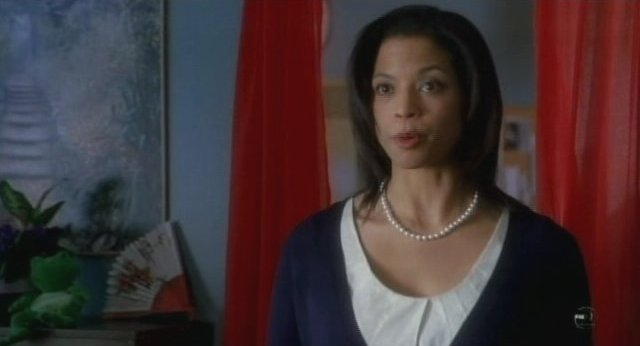 We move back to the lab where Walter and Bellivia are observed smoking a hand rolled cigarette of an herbal nature. No doubt the cigarette is”Brown Betty” their favorite thought provoking substance. The two start giggling when Gene the Cow moo’s. Well we all know that such herbal cigarettes do have such an effect from time to time! 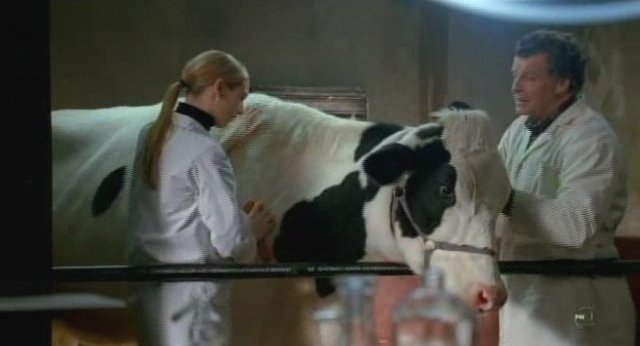 As the investigation continues, Dana discovers yet another soul about to terror bomb a train with a large plastic explosives device (a bit similar to a scene in Caprica where the Soldiers of The One are dealing in souls as well).

By this time in the episode we have figured out that Dana feels she should have perished with her family but is unable to actually die. Her soul magnetism capability has led to a belief is that she can “hitch a ride” on a dying soul to break her mortal life by bonding with them and becoming an angel lifted to heaven to rejoin her family. 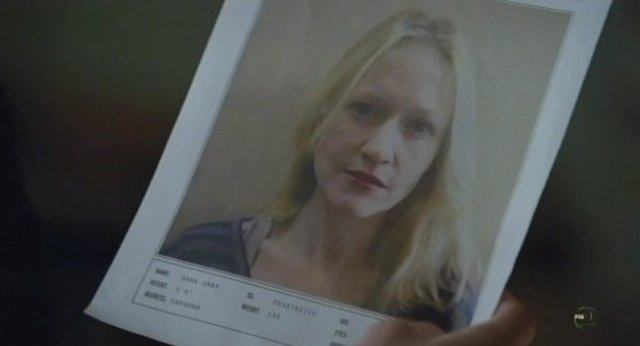 As we observed in the opening sequence, the power of a single death has not been effective for Dana. Dana becomes convinced that a mass death of many people will have enough “energy” to free her from her earthly bonds. The fact that an entire train of innocent people will perish to service her quest has no apparent impact on her conscience. She is obviously of a nature and state of mind which can only be described as OCD (Obsessive Compulsive Disorder).

In an investigation plot twist discovery that reminds one of “The Fugitive” (1993), the Fringe Division uses an audio recording of a telephone conversation between Peter Bishop and Dana Gray after he fakes a call from her departed husband. Peter pleads with Dana to no avail. However the telephone audio recording, much like a similar sequence in “The Fugitive” contains sounds of the train station stops. The audio clues allows Walter, Bellivia and the Fringe Division team to isolate the exact train and use it to track Dana down. 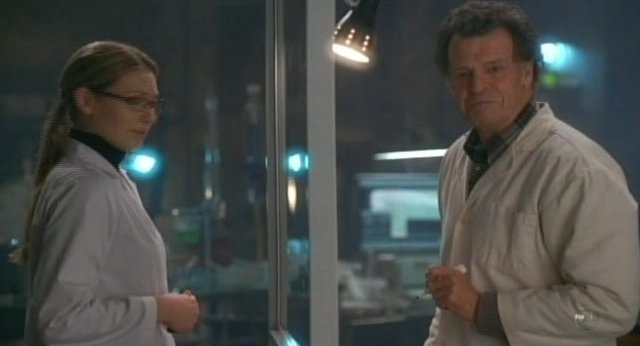 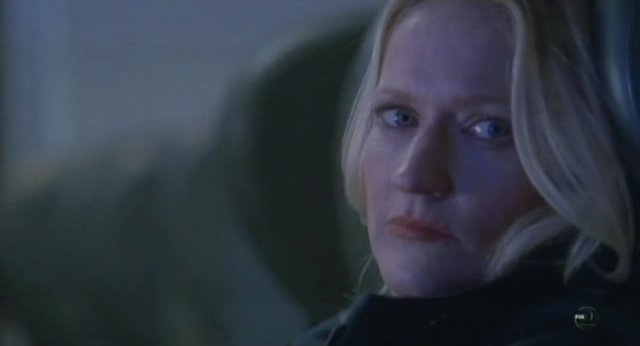 Upon arrival at the train stopped by the authorities, we discover that Dana has escaped the train with the explosive device in her possession. We hear and see the explosion but this time she is the only victim of her own obsession. 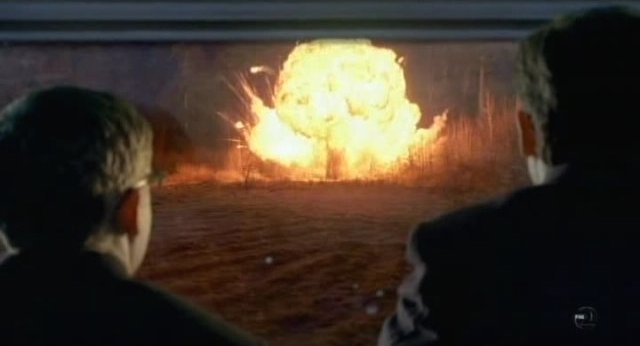 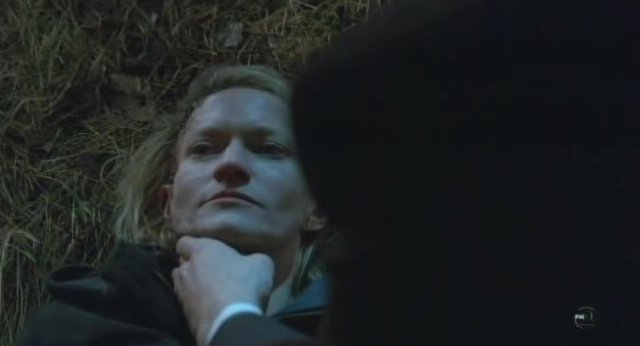 And here is where the Single Effect of the entire episode is focused, obsession. In life and during our interactions, we here here at WHR have unfortunately encountered people obsessed with a television series, an actor, an actress and or other celebrity, sadly to the exclusion of all else in their lives.

Oblivious to the consequences their actions have on others, they are convinced “they know better” and will do anything or say anything to justify their obsession in the process often to the exclusion of all else.

It is not true people. Nor is it appropriate professional or even personal behavior. Celebrities are simply hired to do a job. So are the creators just doing their job. What is their job you might ask? Their “job” is to provide entertainment and perhaps impart a bit of learning in the telling of the story they act in or produce for our benefit. It is that simple my friends. No more, no less.

As the episode draws to an end Bellivia is discussing fate with Peter that the logical reason Dana survived was of a divine nature. Dana’s apparent “purpose” was to be on Earth to ensure the suicide explosive was not set off on the train, thereby by serving a dual purpose of saving the passengers and finally setting her soul free from its obsession in an act of “fate”. 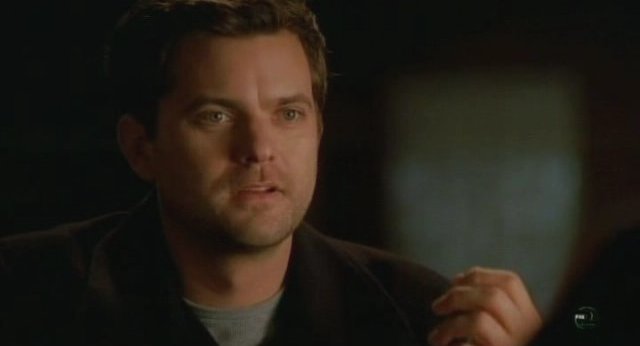 We end the episode with Bellivia convulsing in front of Peter admitting he may have miscalculated the effects of being in Olivia’s body. In the opinion of this reviewer, a perfect setup and use of Single Effect to set up Fringe episode eighteen “Bloodline” which airs March 25, 2011 on FOX. 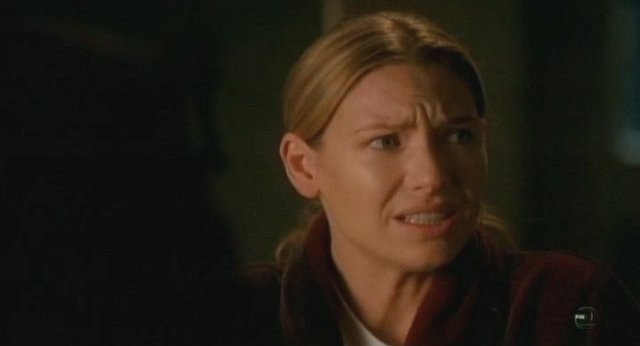 We include a video promo from FOX on the subject of “Bloodline” and the complete episode of “Stowaway” for your enjoyment!

Fri Mar 25 , 2011
Hi everyone. This week’s episode recap/review is full of detailed spoilers so please do not read any further if you haven’t watched the episode yet. You have been warned! In the opening, Marcus (Vincent Leclerc) and Bishop (Mark Pellegrino) are anxiously waiting at the funeral home garage for the delivery […]