Welcome Back Debris Lovers and WormholeRiders,

The eighth absolutely outstanding and exciting episode of Debris, “Supernova”, was written by J.H. Wyman (Joel Wyman) and directed by Clare Kilner.

Science fictions admirers recall fondly that Ms. Kilner is a talented Director from her work on Snowpiercer, Krypton, and The Alienist as well as many other fine entertainment products. Under her direction, “Spaceman” takes the adventure of alien spacecraft crashing on Earth spreading objects with fantastic powers across the western hemisphere into a mind blowing game changing direction!

While previous episodes of Debris addressed many of the questions about the unearthly alien objects found to date by Orbital, “Influx”, Russian spies, as well as foreign governments.

The “Spaceman” story arc takes viewers to a new level of understanding of what to happened George Jones (Tyrone Benskin) who was thought to have been either cloned or reanimated subsequent to his death when his body was switched in a morgue in the United Kingdom by “Influx”.

The cloning hypothesis will be proven incorrect in “Spaceman” when George Jones himself  tells his daughter, Finola Jones (Riann Steele) and Bryan Beneventi (Jonathan Tucker) directly that he was reanimated by “Influx” subsequent to his death in their quest for overthrowing governments as we know them using the powerful alien object we have come to know as Debris.

In this episode we learn precisely why “Influx” has been holding George Jones hostage. Due to his extensive knowledge of extraterrestrial theories and knowledge, “Influx” has been extracting the information they require to harness the Debris for their own nefarious purposes!

“Spaceman” will also reveal a bit more about another character we have seen before named Brill (Sebastian Roché).

The question is who is Brill and what is his real allegiance?

Has Brill taken charge of the “Influx” organization after Anson Ash (Scroobius Pip) was captured by Finola and Bryan, or is Brill an operative of MI6?

Or is Brill much like Craig Maddox who appears to have dual loyalties with connections to Russian operatives?

Subsequently, Craig Maddox (Norbert Leo Butz) had Anson’s memory searched, ultimately providing Bryan and Finola with the location of George Jones. Later in the great episode we will learn George has knowledge well beyond “tin foil hat” theories when he (George) literally uses aluminum foil in “Spaceman”, a whole danged bunch of it! 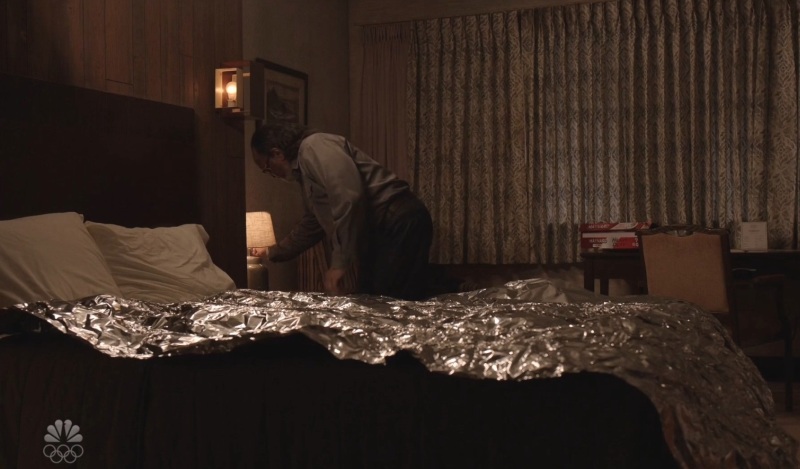 This episode begins with a very frightened young woman (Leigh Danso as Megan Danso) running through a field in what appears to be a surgical gown into an industrial research building of some sort. At first we think it might be Dee Jones (Gabrielle Ryan) since we know that she was being used by Priya Ferris (Anjali Jay) to lure Finola back to England. A closer look reveals that the young woman is not Dee Jones, but is another victim of “Influx” experimentation suffering from exposure to another strange alien artifact.

The young woman is being chased by a worker or security guard (Nevin Burkholder) and another man. The floor of the facility is covered in what are body bags, an obvious indication that whatever is going on in this “Influx” building is not going well for all it’s “subjects”. Seemingly trapped by the two men, the woman struggle with one of them and then de-materializes and runs very quickly right through the second worker. The woman has super powers that is something like the Quicksilver character from The Avengers and X-Men comic book series and movies.

The worker who the woman went through suffers a horrible death from exposure to the the Debris that has no apparent affect on the young woman, obviously the only successful experimental test subject. The security guard is so stunned, in fact frightened by this development, that he is frozen in place as the young woman escapes the facility.

We segue to the briefing room at Orbital. Craig Maddox finally admits to everyone that George Jones is alive and has been confirmed to be at an ‘Influx” research facility in an area of Washington State known as the “Scablands” close to a place called Twin Lakes, Washington. The intel was derived using memory traces from Anson Ash’s interrogation.

In briefing Maddox tells the Orbital agents that the mission is to extract George Jones. However, Maddox takes Bryan into his office telling him that Bryan is not to use Finola tactically on the mission then goes on to say that George will be killed by incidental gun fires. When Bryan asks if the whole team knows, he is told no, only one other Orbital agent has been approved to know that George is to be killed.

Finola, talking with Ferris, says that something must be done. Ferris advises Finola that she has arraigned a special MI6 extraction so that George Jones will be taken back to London alive. Bryan confides to Finola that Maddox has ordered that George is not to survive the extraction.

At this point in the story arc it is nice to know that our heroes, Finola and Bryan have completely placed their trust in each other and not in their manipulative bosses!

Bryan and Finola proceed to the research facility to extract George alive. On the way they find the young woman when Bryan throws dirt at her. The woman who is scared to death, reveals that she was experimented  by “Influx” on as evidenced by a scar on her neck that indicates she has been implanted with Debris. The woman is taken into custody by the Orbital team.

As Bryan and Finola proceed inside the research facility, they find the body bags of the “Influx” victims. What is exasperating is that “Influx”, who claims to be working to share the alien technology with all the people of Earth, apparently have no qualms about killing people and using them as human guinea pigs for their nefarious purposes!

Finola finds a chalkboard with equations on it. She recognizes the writing as her fathers. As they proceed deeper into the facility, they find another laboratory where victims are being experimented on and a power source, a glowing ball of light that has been commented on in the series.

Then a series of fire fights ensue with “Influx” agents  until they find George Jones. Once George is located, Bryan intervenes and does not allow the execution of George Jones.

The running fire fights continue as Bryan, Finola and George escape the research facility. Finola reports to Bryan that Orbital agent Bowen (Daniel Romolliwa), who was the only other agent aware of the plan that George Jones was to be killed by incidental fire died in the gun fights. Bryan goes back inside the facility and destroys any evidence that George was there and then calls Maddox, lying to him, that their intelligence was incorrect and that George Jones was never at the facility. It becomes clear that Finola and Bryan plan to disobey Orbital orders and protect George from them.

On the way away from the “Influx” research facility George explains that he did not know about such alien artifact object capabilities as what they were doing to experiment on human beings. George also related  how “Influx” reanimated him by going through his right eye cranial cavity and operating on his brain! This leads this reviewer to a logical conclusion, does George have Debris implanted inside his skull?

Finola receives a call from her sister Dee, but not from Dee’s cell phone. Dee shares, as we suspected, that Priya Ferris was manipulating Dee in order to capture Finola.

This final piece of information confirms beyond doubt that both the Craig Maddox at the CIA and Priya Ferris of MI6 have not been telling the truth, solidifying the decision that Bryan and Finola have made to no longer follow orders from Orbital headquarters when Finola states “He (George) is not going anywhere!”.

However, what can Bryan and Finola do to elude the combined power of the governments of the United Kingdom and the United States? To further complicate things, we find out that Brill is indeed linked to Priya Ferris when he makes a cell phone call and Priya’s phone rings!? 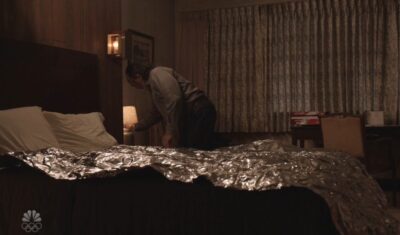 “Spaceman” winds down when George, Finola and Bryan arrive a hotel to spend the night. Bryan and Finola learn that George’s hippocampus has been damaged as a result of the reanimation process causing problems with short term to long term memory storage in the brain. George states he can remember what’s important, but also reveals the reason why Craig Maddox wanted George dead. George was the original leader of Orbital and Craig stole the organization from him clearly indicating that George, although free for the time being, is afraid of being captured!

The episode ends on a bizarre note with George going to the hotel office to obtain a roll of aluminum foil. George covers his bed with an aluminum foil blanket!

A few questions to ponder before next weeks ninth episode “Do You Know Icarus?”:

What’s up with the aluminum foil George made a blanket of?

Does George still have Debris implanted in his body that “Influx” or Orbital can use locate him with?

Where does Julia Maddox (Jennifer Copping) fit in? Copping is scheduled to appear in the season one finale and in next week in 9th episode “Do You Know Icarus?”. Is Julia working with Brill and “Influx”?

We are certain to learn more next week! Make sure to watch Debris on NBC or you can watch the next day on Peacock TV. See you then!

As we proceed to the future with Debris in our thoughts, Team WHR will return with more analysis of our favorite series including select science fiction book and television reviews. We look forward to you visiting our dedicated review and analysis web site here in the future!

Thu Apr 22 , 2021
Hi Mayans MC fans and WormholeRiders, With 2021 still in the grips of the global pandemic there are few things that bring a smile to my face. One of those things is the third season of the FX series (and Sons of Anarchy spinoff) Mayans M.C.. The cast and crew […] 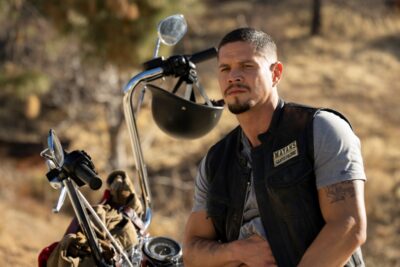