My understanding of La Brea started when I visited the famous tar pits in Los Angeles decades ago. I also remember watching a television show called Land of the Lost, which had a slightly different story about alternate universes. For centuries there was a theory of Hollow Earth, as proposed by John Cleves Symmes Jr, in which he theorized that a hollow earth can be habitable by plants, animals, and even humans. Sound familiar?

Well, that’s precisely what we see in the La Brea episode The Great Escape, written by Arika Lisanne Mittman and directed by David M. Barrett.

No doubt named after the famous 1963 movie, the situation for our wormhole sinkhole survivor’s becomes more harrowing than you would think. How hard is it to escape Middle Earth? We soon find out that it can be a lot harder than assumed. What would you do in a situation that has dire consequences?

What I find interesting about La Brea is the use of the term Sky People since most Indigenous tribes in North America attribute that name to another term like Star People.  Aliens or their gods that have come to earth in human form for the greater good, or to teach lessons or skills of some kind.

I also find it interesting how we in modern times have it so easy with our luxuries that when we are thrust into a situation where we would have to fend for ourselves, would you survive? Most of us are not equipped to handle not having things at our fingertips readily, and that can be a scary thought. It also shows that no matter who we are in society, when we encroach or, in the case of the characters in this series, get sucked into a situation that they did not create, no one is better. Working together is the only solution to get out of a problem. 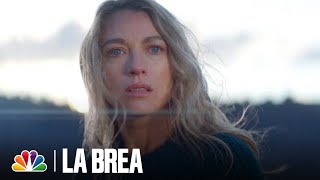 The episode opens with Eve (Natalie Zea) and Levi (Nicholas Gonzales) hugging each other hoping they can find some way to escape with the help of Virgil (Greg Hatton). What they don’t know yet is that Gavin (Eoin Macken) is outside being indoctrinated by The Exiles to mine the mysterious black ore as we discussed in our review and analysis of last weeks episode “The Cave”. When Eve sees Gavin working in a quarry, she is too stunned to go see him at first, then is happy reuniting with him. Levi  is happy to see his friend too.  After discovering how he ended up in 10,000 BC, they begin to plan their escape in earnest.

As I suspected, Sam (Jon Seda) suggests that the group lives off the land “as humans have been doing for thousands of years.”

I always find it fascinating when humans are thrust into a situation completely outside their “comfort zone” and how they handle it. Can they dig their heels in, roll their sleeves, and get to work? Or will they complain and whine and not survive? It is a true testament to “only the strong survive” Would you do it? Would you be able to fend for yourself like they are forced to do?

Paara (Tonantzin Carmelo) confronts Ty (Chiké Okonkwo) about where Silas (Mark Lee) is. Paara says that Silas must pay for his past actions.

With Silas nowhere in sight, Paara punishes them by taking away their food. If I were part of those prisoners, I would have hidden some food away, just in case something like this happened.

The group is deadlocked in a debate on how they should proceed. Do they go and steal back their food from a heavily armed and skilled tribe, or should they not and survive by living off the land? The fact that stealing as an option is brought up by Lucas (Josh McKenzie) is interesting, considering that it is a knee-jerk reaction to that situation. Instead of reasoning about what to do, his instinct is to take back the food they were given.

With resentment at a high level amongst more than a few in the group, Lucas, Scott (Rohan Mirchandaney), and Veronica (Lily Santiago) decide to ignore the vote to not raid Paara’s tribe and set out to steal back the food; the consequences be damned!

Viewers and I are not sure how good of an idea this really is, considering that Scott, Veronica and Lucas are only three people who have no skills against an army of skilled, armed warriors.

Gavin, Levi, and Eve use the map Silas gave to Gavin to find their way back. As skeptical as Eve and Levi are of Silas and his motives, they must trust Gavin and his faith in Silas. Would Silas purposefully lead them astray? Is Levi’s plan to wait until the guard shift changes a better plan? Risk is involved with both methods; it is up to them to choose which suits them better and which will help them in the long run. In theory, it should work, but reality tends to slap you in the face when you are staring down the very people you are running from. Outnumbered and skilled, the prisoners are once again bested by their captors. Man’s ego tends to put him in unfortunate predicaments that usually end up not going as planned.

Veronica, Scott, and Lucas make it to the village and devise a plan to sneak into the compound and find the food and steal it back. Again, scenarios like this usually go awry when not thought out properly. It’s man’s arrogance that he can outsmart people in their element.

Scott had another plan in mind; he seemed to have an ulterior motive. As Lucas and Veronica sneak around to find the food, Lucas sees the man who killed his mother (Karina Logue). With that distraction now forefront of his mind, he has all but abandoned the task he set out to do initially, again risking Veronica’s life in the process. Scott’s motive is soon revealed as he enters a hut and looks for something Silas left behind. Upon finding the object, Scott’s mission is complete.

Gavin’s sacrifice of taking the blame for the coup landed him alone in a cell. Somehow, he managed to survive and reunite with Eve and Levi. Reminiscing how Eve and he met, Gavin reveals that he knows about Levi and Eve. He does not seem mad about it but understands. He cannot be angry in this situation as he will need to rely on both of them to help get out of the problem they are all in. His wish of wanting to start over may not happen, considering Eve’s feelings for Levi and what transpired between the two of them in an earlier episode. I am sure the writers will somehow figure this out, as this trope is typical on shows like this. Eve may be left with the dilemma of choosing between two men; of course, that will also be hard because resentment, while not voiced, may still be a part of the outcome.

Making it back to the encampment unseen and fully stocked with food, Lucas, Scott, and Veronica must answer the group’s questions and explain why they disobeyed the majority vote. Veronica asks Lucas why he did not go through with killing the man that killed his mother; his answer is not surprising. Lucas saw the man with his family made him remember his father. During times of war and conflict, it is often forgotten that those we are fighting against have people who love them and will miss them. There are innocent people always involved. They are the ones that suffer the most. It reminds me of a quote from Platoon “the first casualty of war is innocence.” The theft of the food will have consequences that will affect not only Lucas but all the others in the clearing.

Silas is the one person who is the focus of this episode without actually being in this episode. He is the catalyst for everything that has happened. From the map to the object that Scott found.

Curious about what plans will be put in place to get Josh (Jack Martin) and Riley (Veronica St. Clair) back? With Gavin, Eve, and Levi’s escape is solidified when they over power the guard at the exit on Silas’ map. Unfortunately, Virgil and all the others are in The Cave still enslaved by The Exiles. Gavin informs Eve that Izzy (Zyra Gorecki) has come with him, and Eve runs to find her. They are reunited at last! I guess The Great Escape was worth it after all!

In future episodes we will see what happens with Rebecca (Ming-Zhu Hii) who sent Scott who on a secret mission for to obtain a device in Silas’ home in order to get into the Time Travel Tower facility.

Rebecca says she can help Riley and Josh get reunited with the rest of the group, or will they be trapped in 1988 to become the people that Kenn has theorized about in “The Next Day”? There is still the mystery of what the rock the prisoners are mining is used for and why it is so precious.

“The Great Escape” changed the lives of all of them; we will have to wait and see what happens next week in episode 4 “The Fog” at NBC!

Mon Oct 31 , 2022
Welcome Back La Brea and Wormhole Time Travel Science Fiction Lovers! “The Fog” (fourth) and “The Heist” (fifth) episodes of La Brea clearly establish the second half of the second season with the sixth episode appropriately called “Lazarus” when we will enter the Time Travel facility that was build in […] 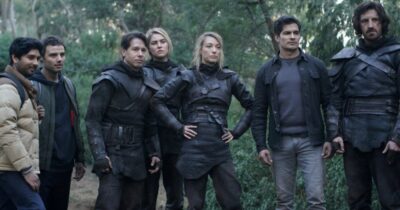