The second episode contains important considerations about the story arc we knew about from events that occurred in the first episode of this season and during the last episodes of season one before proceeding with our analysis of “The Cave”, Team WHR will continue to review our series character development discussions.

After we learned that Gavin (Eoin Macken) is definitely the older version of the younger Isaiah (Diesel La Torraca) as we discovered in the final episodes of season one which was confirmed when Isiah went through the 10,000 BC wormhole sinkhole in “Topanga” and was spotted by Josh (Jack Martin) and Izzy (Zyra Gorecki) getting into the station wagon in 1988 with the nuns that raised him during “The Next Day“.

Viewers will recall the nuns ultimately will put Isaiah up for adoption, to ensure that, unknown to the nuns that he becomes Gavin.

In the second season of La Brea it appears that Silas (Mark Lee) will play a larger role as evidenced in “The Cave”. Viewers will recall that Silas was defiant with everyone. His efforts to stop Isaiah from getting to the future to become Gavin despite the consequences to the timeline were manaical. Therefore his larger role was expected since Silas told Isiah “until we meet again”.

What is interesting to contemplate however is the what if Isaiah had not been time travel transported to 1988 to become Gavin. Beyond Josh and Izzy never being born, would Gavin have simply disappeared in the future? This factor has become a moot point since it is now clear that Isiah was always going to make it to 1988 since Gavin never become ill in the future like Izzy in the future and Josh in 10,000 BC when their existence was threatened by Silas’ selfish actions.

Lilly (Chloe De Los Santos), who successfully made it to the Topanga wormhole to 1988, became Ella (Michelle Vergara Moore). During this episode, a poignant reunion occurs with Veronica (Lilly Santiago) after she is rescued by Eve (Natalie Zea) and Levi (Nicholas Gonzalez) from a group of miscreants known as The Exiles. Of particular import is that in doing so, Eve is captured with Levi surrendering himself to these bad guys in order to fulfill a promise to Eve that he will protect her. This factor becomes one of the central story arcs in “The Cave”.

The other major story arcs that are explored are Josh’s and Riley’s (Veronica St. Clair) time travel adventure in 1988 were they meet an unusual character named Franklin March (Byron Coll) and the arrival of Gavin, Izzy and Ella at the survivor’s camp where bittersweet incidents occur. Each of these scenarios excellently set the foundation for the time travel adventures that we will experience in season two!

The second episode of La Brea was directed by Adam Davidson. “The Cave” written by series creator David Appelbaum and Rob Wright with an opening sequence that finds Eve and Levi imprisoned by The Exiles in a wagon headed for “The Cave”. Eve has a flashback to the time when she and Levi were having an affair.

Eve breaks down in tears when Levi asks where Gavin is? “You know where Gavin is, he’s come home drunk every night this week, I don’t know what to do anymore”. Eve and Levi also discuss their guilt feelings regarding their affair. 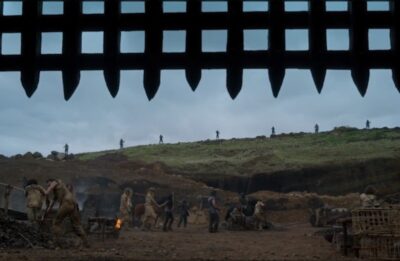 The scene shifts back to the wagon as it arrives at a barricaded stockade surrounding “The Cave”.

Here we learn that the place is filled with slaves who are forced to mine something of value in 10,000 BC that is not disclosed at this time.

Eve and Levi are shoved inside a gated entrance in what looks like a hellhole with the guards beating the slaves, including Eve when she asks a simple question!

We move to Doctor Sam (Jon Seda) meeting Gavin, Izzy and Ella as they enter the survivor’s encampment in the clearing. Gavin confesses that he is really the older version of Isaiah. Sam does not believe this until Gavin proves it by showing Sam the scar on his hand that Sam mended last season when he was young Isaiah.

Ty (Chiké Okonkwo), Lucas (Josh McKenzie), Judah (Damien Fotiou) are all astounded when Ty asks Gavin “How did you get here”. Gavin proceeds telling the blockbuster tale of their journey through the wormhole sinkhole in Seattle that deposited the three of them in the Los Angeles area not too far from La Brea. Gavin and Izzy become distraught when they learn that Eve and Levi have been captured.

Things go from bad to worse when Izzy, Ella and Gavin learn from Sam that Riley and Josh were sucked into the time portal at the same time as Isaiah and Lilly were sent to 1988 in the “Topanga” episode with Lilly growing up to become Ella. Ty hugs Ella as Judah says “This is officially insane”.

Gavin learns that Silas is in the camp, vowing to force Silas to find The Exiles, and that Scott (Rohan Mirchandaney) and Rebecca (Ming-Zhu Hii) have been missing for some time. Viewers will recall that Scott and Rebecca left the camp, ultimately finding the time travel facility built by Rebecca in 10,000 BC that the survivor’s know nothing about at this juncture. Silas recognized Gavin as Isaiah and promises to help him find Eve and Levi.

We segue to Riley and Josh who are at the 1988 site of the Hollywood hills wormhole sinkhole. The entire area has been cordoned off by a veritable army of police.

Josh wants to simply jump the barriers and enter the time portal to rejoin their families in 10,000 BC. Riley talks him out of it saying they will get arrested and they should return under the cover of darkness when it will be easier to elude the authorities.

It is at this time that Franklin Marsh overhears Riley and Josh’s suspicious conversational behavior deciding to follow them to Santa Monica beach where they are enjoying some food and each others company while they plan to return to return to their families in 10,000 BC.

Subsequent to Eve being beaten by The Exiles guards inside the mine, she and Levi are talking about their horrible situation when they meet a man named Virgil (Greg Hatton).

Virgil shares that he, along with many others in the mine, also fell through the original time portal at the La Brea tar pits. All of whom were eventually captured by The Exiles to be used as slave laborers to mine a mysterious black rocks that are the object focus of their enslavement.

It becomes clear at this point the black rock being sought and mined, based on it’s appearance in the episode, is likely Psilomelane embedded in Magnetite. Often called called lodestones, Magnetite was used in early compasses. Both ores are a manganese type of ore, often with a black crystalline composition. Both are generally used in jewelry making and more importantly are ores known for their industrial uses.

This leads to an important question; Where in 10,000 BC would anyone need such industrial use ores? The answer is at the time travel facility built by Rebecca in 10,000 BC! The Exiles are obviously working for whoever took control of the facility from Rebecca. Viewers will remember that she has indicated they will kill her if she is caught by them inside the facility she built. The question is why?

The remainder of the episode story arc breaks down into three critical sub plot areas that will become the focus in future episodes.

Riley and Josh confront Franklin who followed them from the time portal near the Hollywood sign that fell into the wormhole sinkhole to the piers at Santa Monica.

Franklin confesses that he overheard them talking about the portal, and that he is being ridiculed by his peers at University of California for his research that more sinkhole wormholes.

Franklin shares his research details with Riley and Josh that more wormhole sinkhole time portals will be opening off the coast of Santa Monica near Catalina Island that will cause a tsunami tidal wave flooding potentially destroying several coastal cities in Southern California.

Riley and Josh decide to not return to 10,000 BC and instead will help Franklin avert the impending disaster that is projected by Franklin to happen in four days.

Silas takes Gavin to find The Exiles admitting that Gavin’s parents were killed in 10,000 BC. Silas earns Gavin’s trust when he saves Gavin from being eaten by a huge prehistoric bear after being snared in a trap that leaves him hanging upside down from a tree. Silas then surprises Gavin when he gives him a map of The Cave complex that he will need to save Eve and Levi, but saying that he must go on alone for reasons that are not made clear.

On the way, just as Gavin is pressing Silas for the answers about his parents, Gavin suddenly passes out. At first we are lead to believe Gavin is seemingly suffering from the same time sickness that affected Izzy and Josh based on previous episodes where illness has been observed. Instead we learn that Gavin was drugged when he took a drink of water that Silas offered him. When Gavin wakes, he has been captured by The Exiles, is taken to The Cave to mine the ore. Gavin then remembers that Silas put a map in his pocket when he was passing out that contains an escape path from “The Cave”. Eve and Levi are also planning to escape after Levi has also been beaten by The Exiles.

The last important aspect of the current story arc detail finds us with Ty who is wondering what is making noise in the underbrush near the encampment after he had a talk with guilt ridden Veronica to cheer her up.

Suddenly Scott appears alone at the encampment without Rebecca. Looking exhausted and bedraggled after returning from the time travel facility tunnels that he and Rebecca entered during last weeks episode, Scott tells Ty “You’re never going to believe what happened!”

Join us for the next exciting episode of La Brea aptly named “The Great Escape” this Tuesday at NBC! 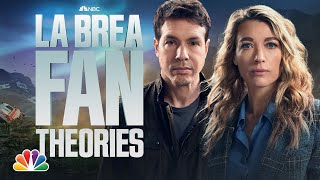 We will be back in the near future with more of La Brea as well as your favorite television series and movie analysis. In the meantime, please feel free to share this article with your friends, co-workers and or family and leave your comments! We look forward to you visiting our dedicated review and analysis web site here in the future! Or as many of our readers and visitors often do, visit WHR on Twitter, or visit me on Twitter by clicking the text links or images avatars in this news story. I and TeamWHR look forward to Seeing You on The Other Side!“

Tue Oct 11 , 2022
Hello La Brea fans! My understanding of La Brea started when I visited the famous tar pits in Los Angeles decades ago. I also remember watching a television show called Land of the Lost, which had a slightly different story about alternate universes. For centuries there was a theory of […] 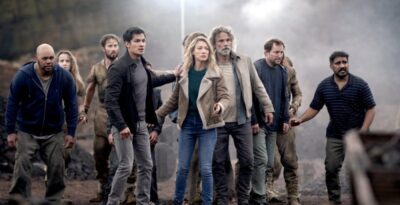