Let me start this review by making something absolutely clear; TeamWHR will NOT believe Coco (Richard Cabral) is dead until we all go to his funeral and say a prayer so that Coco may Rest In Peace. Until that happens, we prefer to believe that Coco survived the assault in Oakland and is recovering in the Intensive Care Unit.

With that said, Coco was actually alive this past week and doing quite well having co-written “Dialogue With The Mirror” with Debra Moore Muñoz in an episode directed by Elgin James that blew everyone’s mind as key characters deal with various aspects of their past lives and the tragedies therein.

Subsequent to the ambush events that occurred in Oakland, the Santo Padre Mayans MC charter met and ultimately decided to declare open warfare on the Sons of Anarchy, believed to be responsible for the death of many Mayans who like Coco who were simply visiting the Oakland charter to pay respects for those who had fallen in defense of their club.

In this episode EZ (JD Pardo), Angel (Clayton Cardenas) and Manny (Manny Montana) head to Northern California to exact revenge but things end up going terribly wrong.  In the melee at a hospital, we find a much loved character, Gaby (Sulem Calderon), encouraged by EZ and Angel’s father Filipe (Edward James Olmos) who had left EZ to seek a normal life outside the violent existence of the Mayans. It is here that we learn that blood is indeed thicker than water when EZ does something that this editor had hoped he would never do again, murder an innocent person caught up in the maelstrom of the blood lust of Mayans MC retribution against the Sons Of Anarchy! 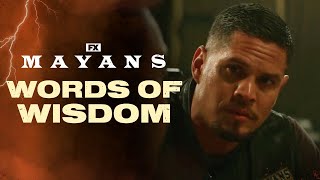 Dialogue With The Mirror:

We begin this emotional rollercoaster of an episode when we are with Miguel Galindo (Danny Pino) who has escaped from his aunt’s convent last week after being warned it was no longer safe for him to stay there. We do not know exactly where Galindo is as he flees for his life with a loyal security guard. However, while driving away on a highway, they spot a vehicle in distress on the side of the road. Naturally it is a trap set by one of Galindo’s many enemies.

Galindo, as we have learned, is a heartless miscreant who tried to kill his wife Emily (Sarah Bolger) last season, orders his guard to pull over. When he gets out to investigate, the car explodes. Galido and his guard realize it is a trap and attempt to leave the scene. Suddenly, a large truck rams their vehicle. They appear to be captured as Galindo and his guard must face whomever of Galindo’s enemies set up the trap. We do not know if Galindo survived the encounter or was executed on the spot for his past evil doings.

We segue to EZ who is visiting Sofia (Andrea Cortés) at her home. The chemistry between these two becomes more apparent when Sofia shares that her tattoo represents the 54 months she spent in prison when her daughter drowned in a pool while Sofia was passed out drunk. EZ and Sofia have a heart to heart talk about their past mistakes including EZ’s own time in prison. The couple grow closer together as a result. EZ has empathy for Sofia, who in the past has tried to help people with their challenges in life. Sofia makes it clear their relationship will continue so long as EZ does not try to be a savior for her own past missteps in life. EZ shares that he has a mission for the Mayans and will return as soon as possible. The two part company with an mutual agreement to respect each other.

As we learned last week, EZ’s mission is to visit the University of California Davis hospital to kill members of the Sons Of Anarchy to send a message they will never forget after their attack in Oakland California. EZ is Angel and Manny develop a rather hasty plan to take out Les Packer (Robert Patrick) the Sons of Anarchy leader who is in the hospital in the Oncology section for surgery, and to kill as many SOA as possible. It is at this point their plan falls apart. The UC Davis hospital facility is swarming with SOA guards including Terry (Greg Vrotsos) who led the attack in Oakland. EZ, Angel and Manny open fire but are forced to retreat since they are heavily outnumbered.

During the firefight, Manny separates from EZ and Angel in an attempt to distract the many SOA guards ramming and wrecking a bunch of SOA motorcycles.  As EZ and Angel scramble to escape, Gaby, a lover of EZ’s from last season is encountered in a hallway after she witnesses Angel killing a co-worker of hers while EZ wounds a guard. Taking no chances, EZ and Angel take Gaby with them when they hijack a vehicle to escape the hospital grounds only stopping in what appears to be a safe location some distance away.

EZ talks with Gaby about what happened, asking her to not report what she has seen. Gaby tells EZ that although she still loves him, she is obligated to report the murder Angel committed to the police.  EZ is unsuccessful in convincing Gaby to stay quiet despite their love for each other with Gaby telling EZ she believes there is good in him. In a stunning move, which surprised this editor, EZ kills Gaby in cold blood as a stunned Angel looks on in disbelief proving. As the old adage states: that Blood IS Thicker than Water. We do not know where EZ disposed of Gaby’s body but assume that he left her in the wooded area where they stopped after the hospital fiasco.

We catch up with EZ when he arrives back at his trailer. Sofia has been taking care of Sally the pit bull when EZ enters drenched in blood from killing Gaby. Sofia is happy to see EZ has survived the mission and disposes of the evidence of the bloody clothing. EZ is clearly upset by what he has done and begins to explain what happened to Sofia who stops him. As part of their earlier agreement to not discuss past wrongdoings, it is clear that Sofia is only concerned that EZ is home safely. At this point, I must say that EZ’s impulsive plan to attack the SOA ended in both unneeded death and a complete disaster.

In this episode we also learn more about another Mayans couple; Creeper (Joseph Raymond Lucero) and Kody (Stella Maeve). Their relationship has been on equal footing with Creeper being forthright with Kody about what he has been through, the wounds he has suffered, and what is coming in the future war with the SOA now a full blown conflict. Creeper shares that he is concerned his Mayan teammates will suffer more casualties in the battles looming just ahead. Kody asks about all his tattoos which Creeper explains are related to each time he has been shot in the past. Kody is obviously concerned that Creeper could be shot and killed in war with the SOA.

Next we will explore Bishop’s (Michael Irby) outright resentment of Padrino Alvarez’s (Emilio Rivera) leadership of the Mayans after he was stripped of his title of vice President. We find Alvarez and Bishop having a private conversation where Bishop is invited to a birthday dinner for Alvarez’s wife Diana (Patricia De Leon). It is clear that Alvarez is being sincere by trying to mend fences with Bishop who at first refuses to attend.

Bishop decides it is best to go to the party since the offer seems genuine and is in the best interests of the Mayans. At the party, Bishop tries to be cordial but ends up frustrated when it is clear the mending of fences includes a blind date with a friend of Diana’s. When Bishop gets drunk, he decides it is best to leave the premises, Alvarez follows him outside where Bishop tells off Alvarez again and rides away with the bad feelings between the two continuing despite Alvarez making a sincere effort.

We wind down the episode with Angel and Nails. Angel still does not know that Nails (Justino Adorno) has suffered a miscarriage and was nowhere to be found when she needed his help. Nails tells Angel it is over between them and leaves just before his father Felipe pays a visit to his grieving son. Angel is angry about recent events and throws his father out in a rather disrespectful manner.

A drunken Angel goes over to Coco’s house to have sex with Letty (Emily Tosta) again subsequent to rudely seducing her in the previous day. Letty tells Angel off and starts to throw his ass out of the house in a fashion reciprocal to Angel throwing Filipe out in the street, but not before Gilly (Vincent Vargas) shows up to give Angel a good beating for his foul behavior. Letty yells at both Angel and Gilly to get out of HER house. I felt sorry for Gilly who was really trying to protect Letty from the Angel who has become an unfeeling selfish maniac!

The episode ends on an upbeat note with some good news when Angel returns home. Here Angel finds Adelita (Carla Baratta) who has been waiting for him. Angel, smarting from the physical and emotional beating he just received, barks at Adelita for leaving him alone when he needed her when their son disappeared. Suddenly, we hear the sound of a baby crying and Angel immediately softens his behavior when he realizes Adelita has found their son! Angel gently picks their child with Adelita looking on compassionately as Angel states: “My boy.”

Let’s hope this represents the beginning of a positive change in Angel. In the meantime, we leave you with a sneak peek of next weeks episode “The Righteous Wrath of an Honorable Man”. 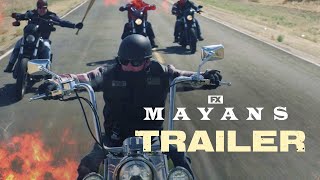 Mon Jun 6 , 2022
Greetings my fellow Mayans MC fans, We are getting down to the last few episodes of season 4, and there is no shortage of excitement as we proceed to conclude season four. So many subplots to cover and so little time. With so many areas of the story arc still […] 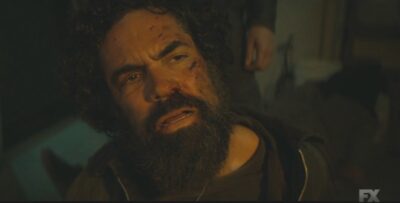