A new science fiction drama thriller premiered on SYFY in the United States and CTV SciFi in Canada to rave reviews across the Internet, and with good reason why. The new series is a tribute to the entertainment industries iconic George A. Romero, creator of the famous “Living Dead” series of films.

Many will recall the famous “Night of the Living Dead” (1968) film in which Mr. Romero not only wrote the screenplay and directed the film, few know that he also appeared in the film in an un-credited role as a news reporter. “Night of the Living Dead” was followed by a series of hit “Living Dead” movies that stretched for nearly four decades, setting the benchmark for such science fiction drama films that are legend to this very day!

“Day Of The Dead” is described by the creators as “Six strangers trying to survive the first 24 hours of an undead invasion.” Of interest, it appears that the ten season one episodes may follow the format of the hit series “24”, focusing on the action of a single day in the living, and the undead, within the town of  Mawinhaken, Pennsylvania, as inhabitants flee for their lives.

If the series is successful, this could setup a “Day Two”, “Day Three” type of story arc that was loved by “24” fans.

Fingers crossed for a successful first season run with more seasons in the future!

What is to come next in “Day Of The Dead”?

The series premise is directly related to “Night of the Living Dead” which will make this an enjoyable experience featuring the latest in high quality cinematography, superb visual effects technology by Todd Masters team, and outstanding makeup design from the team led by Ashley Forshaw!

Before beginning of review analysis, we include the official trailer below for your enjoyment. 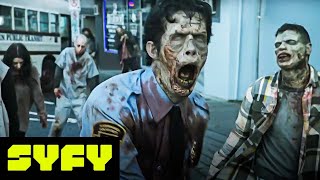 The Thing in the Hole Pilot:

The pilot episode, written by Liz Hsiao Lan Alper, Maisie Culver and Jed Elinoff finds us on a normal day in the fictional town of Mawinhaken, Pennsylvania. The episode opens with a look at the front page of a local newspaper on the ground regarding the mayoral race.

The headline reads “Vote For Mayor Divides Town”. If you look closely at the newspaper, you will notice legendary character actor Jay Brazeau (Stargate SG-1, Stargate Atlantis, and over 270 other roles) is the Mayoral candidate Parker who is running against Mayor Paula Bowman.

It is not known if we will see Brazeau again in a cameo? Perhaps as a Zombie? We shall see and hope so because Mr. Brazaeu is a fabulous actor we have admired for many years.

No doubt the newspaper headline concerns the controversy about the Cleargenix Energy Corporation fracking operation outside of town.

Mayor Bowman supports this effort due to it’s financial benefit to the future of the town, but as we will quickly learn, it’s soon to be realized as an apocalyptic event that has a detrimental environmental impact… to human beings.

No one has any idea what fracking is about to do to Mawinhaken and it’s citizens.

When this is all over, who is the mayor will be the least of their worries!

We begin in the near future with Zombies making footsteps on the newspaper. The camera pans back where we find Cam McDermott and Luke Bowman in their car with a Zombie crawling over the hood after they had rammed the foul creature.

Cam and Luke thought they had killed the nasty critter, but as the camera pans back further, we observe that the entire town is infested with Zombies, apparently including the conversion of the local Sheriff, Captain Pike to a Zombie. Cam and Luke flee, running for their lives as the Zombies are witnessed feasting on some fresh meat, none other than their friends, the local townspeople!

Trapped in a dead end alley, things do not look good for Cam and Luke, when out of the blue a miracle happens. Current Mayor and Mayoral candidate Paula Bowman, in a limousine hearse no less, has her driver ram a bunch of the ravenous beasts. Jumping out of the limo Paul yells “Get in the car boys”.

No argument from Cam and Luke as Mayor Paula pulls out two pistols to blast the Zombies, screaming at them;

“How does the Second Amendment taste Motherfuckers!”

Amazingly this was not bleeped out in the broadcast version, the language was clear as a bell in the promotional and the broadcast episode. We applaud SYFY and the creators for using adult language throughout the pilot episode.

Such descriptive language adds realism to the entire series and we hope it is used where it is appropriate to do so in the future episodes.

Thankfully they all speed away to safety, but not before we see Mike Dopud (Cam’s father, Detective McDermott) who is leading the pack of crazed Zombies marching towards the car, no doubt to eat them all for dinner!

The scene then flashes back to a time before the Zombie apocalypse. The town is peaceful and the residents are happy. People are working and living their lives in the idyllic, serene mountain town.

At the local fracking mine, Sarah Blackwood is selected to go down into the drill bore hole when some sort of trouble breaks the drill bit. Sarah asks “why me?”.

Because you’re “the new guy” says the burly site foreman.

Sarah is observed getting ready to go to the bottom of the fracking bore hole. After arriving there, Sarah suddenly screams after seeing what appears to be a mummy hanging from the cave walls!

Sarah calls the police to report the dead body and gets chewed out by the burly foreman for notifying the police.

Butthead foreman then backs down, telling Sarah she did the right thing, and she can go home for the day with full pay.

This turns out this is cover up by the foreman as we learn later.

A minor earthquake tremor, likely caused by the fracking, shakes the town as we are with Cam who is woken up by the shaking. Cam calls for his Dad who does not respond.

Segue to Detective McDermott who is on the phone with his boss Captain Pike.

Pike explains that an employee of Cleargenix Energy Corporation, a Sarah Blackwood, reported that a dead person, a mummified human being, has been found at the fracking drill site in a bore hole cave.

Captain Pike orders McDermott to go to the fracking site to report to her on the dead body that was discovered.

McDermott is not happy about this, but follows orders, only later to be told by Captain Pike to come back to the sheriff’s station.

Something stinks of political corruption and Detective McDermott knows it!

Cam is with Lauren who is the technician at the local mortuary taking a smoke break before tending to her first solo embalming of a man named Jerry (Dan Shea).

Suddenly Lauren makes a shocking discovery, the eyes on Jerry the corpse have popped open!

Otherwise, all seems to be going well before the funeral that day at the local cemetery. It looks like we will need a new mortician in Mawinhaken because, unfortunately, the body that Lauren embalmed attacks Lazlo the mortician.

This is the beginning of the dead starting to rise in Mawinhaken, Pennsylvania.

Luke and Trent are seen harassing Cam while he is working at the cemetery. They chase Cam who escapes into the cemetery.

In the mortuary, Lauren finds out the embalmed body of Jerry is missing from the casket, her boss creepy Lazlo has been attacked, all the while as the funeral guests are arriving.

This discovery by Lauren will spell the beginning of disaster for the hapless residents of Mawinhaken.

Having been called off by the Mayor’s office by the burly foreman who tells him that it was a deer that fell into the bore hole that Sarah got freaked out over, McDermott becomes very suspicious.

What Detective McDermott finds out next is what appears to be the catalyst for the entire disaster after he picks up Sarah who tells him it was not a deer, but the remains of a mummified body.

McDermott, with Sarah guarding the rope line, confirms there are mummies in the cave below the drill site. Sure enough, burly foreman finds them and punches Sarah, resuming the drilling. Not a good idea since this wakes up a bunch of the mummies. They capture Detective McDermott likely turning him into a Zombie!

Back in town the election is taking place while people are oblivious to what is transpiring. We learn that the Mayor’s husband Trey is a dirt bag. He is having an affair with Nicole, her campaign manager. We feel sorry for Mayor Bowman and hope she catches these two adulterers in the act later in the series.

The scene switches to the cemetery and mortuary. Lauren finds her boss dead, and the embalmed corpse Jerry is fully reanimated wandering around the halls looking for victims. Screaming while the funeral guests have no idea what’s going on, Lauren trips up the Zombie Jerry, telling the funeral guests to flee.

Outside, the undead are being reanimated in large numbers in the graveyard to the horror of Cam who runs over a few with his tractor with a lawn mower attachment. Cam is observed chopping a few of them to them to bits with blood streaming out the back of the lawn mower. Truly a great scene. However, the headless Zombies seem to be unaffected by their lawnmower head and haircuts!

Inside, Lauren skewers the embalmed Zombie Jerry through the heart. We hope Jerry stays dead!

The final scenes find Lauren and Cam looking at the Zombies who are at the door to the mortuary.

As Cam and Lauren are leading the Bobby Hart’s funeral attendees to the basement for safety in the mortuary, back in town, the people are clueless. Absolutely with no one knowing what the heck is about to happen to poor Mawinhaken!

Our grade for the first episode is a Straight A!

The action was quick and fast flowing, the characters and human attributes are believable, the cinematography superb, the visual effects outstanding, and the story arc pays homage to the “Living Dead” series of films that began over fifty years ago!

Be certain to watch live or DVR “Day of the Dead” on SYFY in the United States and CTV ScifI in Canada to help boost the ratings for the series.

In closing for now, we at Team WHR look forward to tweeting with the fans each week during the next nine episodes!

Wed Oct 20 , 2021
Welcome back La Brea Science Fiction Wormhole Time Travel LoversI As we have mentioned previously, this series appears to be a hit, demonstrating strong ratings for the Pilot episode at 6.2 million viewers in the United States with a .59 rating share and 4.9 million viewers with a .60 ratings […] 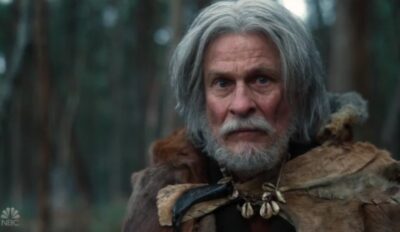