The superb second episode of season five, “Old Friends” was written by Jackie May, and ably directed by Jonathan Scarfe, the Axel Miller character we know from earlier seasons of Van Helsing.

As the fifth and final season commences in earnest, it is nice to note that Jonathan Scarfe not only continues working as a Van Helsing series Director, he, along with Kelly Overton are also serving as co-executive producers working alongside Jonathan Walker, Mike Frislev and Chad Oakes to bring the past to life on our screens each week!

All of this is hopefully leading to back the present and future on Earth in the fight against The Dark One, Dracula (Tricia Helfer) who we found out was actually an innocent woman named Olivia, married to Count Dalibor’s (Kim Coates) and a new mother of a baby boy named Cristof!

Joining Jack (Nicole Muñoz) in the past fight against Dracula, The Dark One, we learn in “Old Friends” that Bathory (Jesse Stanley), a sworn enemy in the future, is a vampire hunter in Transylvania located near Count Dalibor’s castle with a loyal band of vampire hunters in the village, all seeking the death of the series evil mischief maker, Michaela (Heather Doerksen).

As we proceed to unravel the second episode, “Old Friends”, and based on being featured in the promotional poster of Van Helsing for 2021, viewers will not be left to wonder if we will see many of our old friends like Vanessa (Kelly Overton), Violet (Keeya King), Axel (Jonathan Scarfe), Julius (Aleks Paunovic), Doc (Rukiya Bernard) and many others who have made Van Helsing so enjoyable the past five years!

As such, like most Van Helsing viewers who have grown to admire this science fiction fantasy series, Team WHR is certainly hopeful that we will see other characters such as Ivory (Jennifer Cheon), Flesh (Vincent Gale) and Jolene (Caroline Cave) will return to reprise their roles once the season five journey into the past via the wormhole portal is complete as Jack returns to us all to the present timeline! 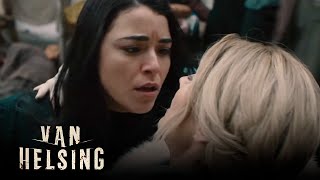 We rejoin our able vampire hunter Jack (Nicole Muñoz) who is being readied for a hanging. The villagers are rightly screaming for her death after she killed sweet Olivia, wife of Count Dalibor, in the public square during the previous Van Helsing episode “Past Tense“.

The Olivia character is a dual role played by Tricia Helfer. As shown in the video above, Jack sincereky believed that killing Olivia would preclude the return of Dracula, The Dark One.

Jack will find out in “Old Friends” that Michaela has other dark powers at her disposal and that killing sweet Olivia will not do the trick.

Even Jack’s new friend Florian (Matus Kvietik), who warned her not to kill Olivia, has forsaken her as the noose is placed around her neck. Then is an instant, Jack is apparently dead as Bathory, Roberto (Dan Cade) and her members of her crew watch in amazement, wondering who Jack is, and what does she have to do with Michaela and the death of Olivia?!

The scene moves to a grieving Count Dalibor who confronts Michaela that he witnessed her brewing up concoctions for some evil purpose. Michael says that she has been plotting for some time and that Olivia is no more and for Count Dalibor is to no longer concern himself with such matters.

Michaela, apparently aware of the healing powers of Van Helsing family members, instructs her malcontent minions to go to Jack’s grave and cut her head off! Viewers expressed concerns on social media during the broadcast that Michaela will ultimately Jack, removing her character from the series and well as kill Dalibor, or convert him and his newborn son to some yet undetermined nefarious purpose.

Segue to Jack’s grave site; Michaela’s sinister Sisterhood who have been sent to sever Jack’s head are stunned to find that Jack is alive. Jack power to heal allows her to immediately attack the Sisterhood sent to chop off her head, ending one of their lives.

Subsequent to Jack eliminating one vampire, she recognizes the other person is Alexandra (Sarah Aratoóvá) who Jack confronted in the season opening episode. Jack bites Alexandra converting her back ti human form. Jack takes Alexandra back to her brother Florian who is grateful to have his sister back.

Jack immediately recognizes Bathory thinking her the same enemy she encountered in season for of Van Helsing only to find out that Bathory is a vampire hunter in the past.

Bathory explains to a disbelieving Jack that she was forced to kill her own mother, another vampire hunter, when her mother dabbled in the dark arts in an attempt to overthrow and kill Michaela. Jack accepts this explanation when others in the band of vampire hunters substantiate their belief in the details that Bathory has shared with Jack.

We move to Count Dalibor’s castle to deal with the other person thought to be dead, sweet Olivia.

Michaela is observed cooking up an evil stew of villagers that she has killed to extract their blood near the dead Olivia who is in an ancient bathtub.

Suddenly, the dead Olivia is reanimated by Michaela in a bath of blood! It is still mostly our sweet and innocent Olivia who is cleaned up and placed in her chambers for the time being while Michaela plans to have her now shell of a body infested with Dracula!

Count Dalibor finds his wife alive and is suspicious to put it mildly. Dalibor takes his son from Olivia and locks her in a cell in the dungeon noting that she no longer has a heartbeat and is cold to the touch. Olivia knows this to be true, saying to herself “you should not be here” and cries in anguish about her cruel fate. Viewers, including this editor, expressed dismay and sympathy for Olivia knowing that she is merely a pawn for the malicious malcontent Michaela and her minions of evil.

Bathory, convinced that she and her group will be killed by Michaela tell Jack they must leave the area. Jack convinces Bathory using the insignia burned in her arm by Michaela in the future that she can lure Michaela into a trap so that Bathory’s cadre can kill Michaela before she is able to summon Dracula to inhabit the body of Olivia that night during the full moon. 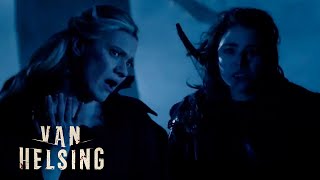 Jack appears in a mirror near Michaela and appears to bait the trap telling Bathory and her troops to “wait for my signal”. In a shocking turn of events, when the time comes, Bathory is nowhere to be found.

When Jack comes out of the trance, she demands to why Bathory did not come upon her signal? Michaela instead has used her considerable evil powers to trick Jack into thinking she (Michaela) came to the forest when in fact it was all in Jack’s mind!

This wastes precious time leading to the final scenes of the episode that comes to a conclusion with Jack, Bathory and her companions realizing that they are too late.

Jack, armed with a quiver full of arrows and all of Bathory’s troops are observed running towards the castle where Michaela has just resurrected Dracula, replete with her dark black, evil eyes!

Michaela, now flush with her evil powers, stands ready for Jack’s pending assault that is to occur in the third episode, “Lumina Intunecata”.

As we move forward in the fifth and final season of Van Helsing, some questions to consider:

Will Count Dalibor join Jack and Bathory to fight Michaela and Dracula, The Dark One?

What will become of Olivia and Dalibor’s newborn son Cristof?

How long will Jack be trapped in this time period before returning to the present? 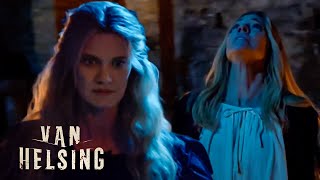 Debris Review - Do You Know Icarus? Timeline versus Timeline!

Tue Apr 27 , 2021
Hello, my fellow Debris fans. This latest episode was a great one. Had many different philosophical themes written in it. The name of the episode is “Do You Know Icarus?” and my answer would be yes, we do. We all have had a bit of Icarus in us at different […] 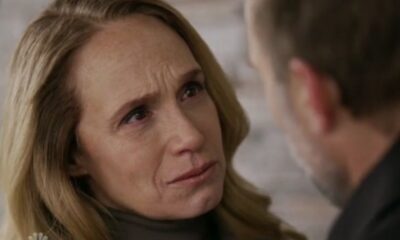