In the poignant seventh episode of season five, “Graveyard Smash” features the joyous return of Jack (Nicole Muñoz). The episode was written jointly by Matt Venables and Jeremy Smith, and delightfully directed by Leslie Hope.

What Team WHR noticed when viewing was that all the Helsingers were rooting for the efforts of Violet (Keeya King) and Ivory (Jennifer Cheon Garcia) who barely escaped with their lives in “Sisterhunt”. As well, Julius (Alek Paunovic) and Axel (Jonathan Scarfe), who fought to escape the malevolent minions of Dracula The Dark One (Tricia Helfer) in “Carpe Noctis” are rejoined with Violet and Ivory.

This episode featuring the return of Nicole Muñoz is subsequent to three of the remaining members of the Sisterhood, who had been converted back to human form, who were killed, sacrificing their lives trying to thwart the malignant minions of The Dark One.

In this episode we find Violet and Ivory are rightfully in mourning, devastated at the loss of their now human vampire hunting sisters.

Evading a hunting party of their own was Julius and Axel, who also barely escaped death when Dracula’s terrible troopers trapped outside Fort Collins them due to the capabilities of Bathory The Oracle (Jesse Stanley). Axel and Julius have an excellent tool, the enchanted magic compass that is pointing the way to the Van Helsing sisters.

The heartrending episode features questions in “Graveyard Smash” we must consider; How far behind Violet and Ivory are Julius and Axel? Will all our heroes survive after finding Jack?

The great news answers are that in this episode Jack will rejoin the pack of vampire hunters in the present but at a terrible price. “Graveyard Smash” will result in the death of one of our favorite characters, Julius.

Who? Tragically the it is Julius (Aleks Paunovic) who will make the ultimate sacrifice to save Violet, Jack, Ivory and Axel so they may continue the attack on The Dark One.

The episode opens as Axel and Julius continued using the enchanted compass to locate Van Helsing sisters while Violet and Ivory are striving to stay ahead of Bathory and The Dark One. With the fantastic fight sequence in this episode (shown below_, as we move closer to an exciting series finale in early July of this year what will undoubtedly be filled with more action and fight scenes! 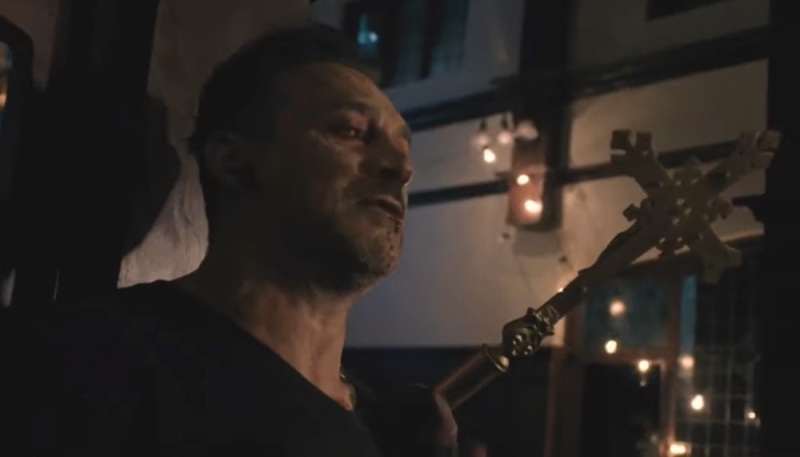 The episode opens with a scary sight, a disembodied head on the hood of a wrecked car ordering two people to get “The Van Helsing”. Interestingly, this reference is Violet only at this point since The Dark One and Bathory The Oracle are unaware of Jack’s return to the present which pinpoints an interesting limitation of Dracula’s powers.

The Oracle, who we know is Bathory converted to evil in the dark ages when she tried to help Jack, is commanding a pair of minions named Lukas (Ron Selmour) and Shavani (Rami Kahlon) to find Violet Van Helsing who is making her way east with Ivory following the clues left by Jack for them to follow.

The voice of Bathory orders them to chop Violet’s head off, threatening that if Lukas and Shivani do not succeed, including retrieving the Amulet that Violet has possession of which contains part of Dracula’s power that Jack drained from The Dark One in the past, they will face the wrath of Dracula,

This obviously means death is the penalty Lukas and Shivani will pay if they do not cooperate. Lukas is angry, flinging the disembodied head onto the ground as he and Shivani proceed with their mission stating “What choice do we have”? The answer? None! “We will kill (Violet) the Van Helsing” says Lukas. This bit of information confirms that no one, including Dracula and Bathory The Oracle know that Jack found a way to return to the present.

Before proceeding to the east coast, Violet hears Ivory screaming. Thinking Ivory is in trouble, Violet sprints to her to help out. Upon arrival, Violet learns that Ivory is chanting a war cry warning for others in the Sisterhood, obviously in mourning for the last three of the Sisterhood who were slaughtered by the “Vanator” in “Sisterhunt”.

Violet asks why she is doing this since Ivory is the last surviving member of the Sisterhood. Ivory relates that she hopes that others may have survived and that she is not the last of the Sisterhood encouraging Violet to do her own war cry “For Jack”.

Both of our heroes do a war cry, despite being separated from Axel and Julius, and continue east to fight The Dark One.

We learn that Ivory and Violet are near Philadelphia, Pennsylvania after Ivory and Violet have been following the coordinates Jack embedded in Van Helsing family book on a page that had not been there previously.

Once in Philadelphia, Ivory and Violet find the location mentioned in the book. Upon arrival, they find themselves in an ancient cemetery that contains a gravestone about the United States Liberty Bell.

Violet says that this is meaningful clue from her childhood with Jack and that what they have found is obviously Jack sending them a message to them from the past.

Good news occurs since Julius and Axel, who have been following the enchanted compass, arrive at the church in a joyous reunion of vampire hunters! While inside the church, our heroes run Pastor Diaz (Jorge Montesi) who aims a shotgun at Julius’ back.

Pastor Diaz explains that he swore an oath to the Van Helsing family to protect the contents of church at all costs. Pastor Diaz sees that Violet has the sacred amulet and then welcomes the group to his church and agrees to help them in their search of the premises to find what they are seeking.

Searching the church at great length, our heroes, aided by Pastor Diaz open a tomb which contains a coffin with markings of Jack. When they pry open the coffin, they find Jack, who has apparently been sleeping waiting for them to arrive!

As our vampire hunters celebrate their reunion, Jack advises them that their next target should be Bathory.

Jack explains that she knew Bathory in Transylvania in the past and that they may be able to turn The Oracle back into “good” Bathory to help the vampire hunters.

Jack explains that if Bathory is able to finish reading the anti vampire incantations as she did to in Dalibor’s castle in the past, it may break the spell Dracula placed on Bathory.

Jack goes on to delineate that The Dark One had stopped Bathory from completing the incantations in the past and if they can succeed in the present, they may be able to weaken and kill The Dark One. Ivory says a Sisterhood prayer in the church to encourage everyone in their quest to defeat The Dark One!

Unfortunately, Lukas arrives at the church and begins an assault to capture Violet and the amulet for  The Dark One. Fortunately, our heroes have an ample supply of Doc’s (Rukiya Bernard) toxic to vampires bullets that are coated with the specially created anti vampire toxin.

As the battle is turning in our heroes favor, Bathory sends in a cloud of the poisonous orange dust to reinforce Lukas and his gang of vampires. Pastor Diaz tells the group to follow him to a secret escape tunnel that has an iron gate that will stop Lukas and his vampires.

Everyone gets to the secret tunnel in the church basement, Axel, Ivory and Jack make through the iron gate safety, but Julius and Violet have fallen behind fighting off the hoard of vampires. Violet helps Julius but the iron gate slams shut killing Pastor Diaz.

Julius and Violet are trapped inside while Axel, Ivory and Violet head for the exit. Violet notices that Julius has been wounded.

Julius tells Violet he has a cure that heal his wounds that he calls “me spinach”. This is formula that Doc gave him with a warning to never take more than a few drops or risk death.

Julius, knowing that he will need superhuman strength, shallows the entire bottle to protect Violet. Julius kills all the vampires including Lukas but is mortally wounded when Lukas embeds a golden crucifix in Julius’ chest.

Using his last bit of strength, Julius punches through Lukas’ chest grabbing his heart ends which is deposited on the floor with Violet looking on in horror. It is here that our great Julius, makes the ultimate sacrifice to protect Violet, dies.

The live tweets during this section of the broadcast went silent for a moment, then turned to shock as the truth set in when Jonathan Walker tweeted about Aleks Paunovic and his great role in Van Helsing (Click here to read the tweet).

“Graveyard Smash” ending sequence finds us with Axel, Jack, and Ivory who have left the church hear a war cry from Violet to mourn the loss of Julius who saved Violet. The group waits for Violet to catch up. Violet shares the sad news of Julius’ heroic death. With an look of dedication, our remaining heroes head to Washington DC to complete their plan to end the rule of Dracula The Dark One once and for all!

As we approach the last episodes of Van Helsing, questions come to mind that Team WHR is certain will be addressed;

Will Vanessa Van Helsing reappear in the present to help her daughters defeat The Dark One?

Will all our remaining heroes, Ivory and Axel in specific, survive the forthcoming battle?

Will Bathory be saved by Jack, Violet and Vanessa?

2 thoughts on “Van Helsing Review Graveyard Smash – Jack Rejoins The Pack As Julius Sacrifices All Against The Minions of The Dark One!”

Van Helsing Review - Deep Trouble But Will All Survive?

Thu Jun 10 , 2021
Welcome back Helsingers and WormholeRiders! The eighth episode of season five, “Deep Trouble” represents the pivot episode in the story arc before the long awaited return of Vanessa Van Helsing (Kelly Overton). Written by two of our favorites Jeremy Smith and Matt Venables who raised the bar on excitement bringing […] 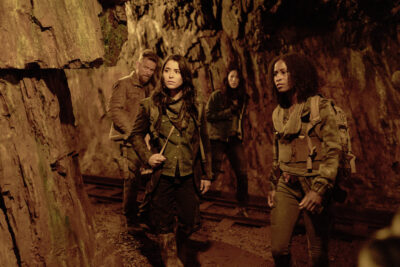