Written by two of our favorites Jeremy Smith and Matt Venables who raised the bar on excitement bringing many fans to wonder if all the heroes will survive in an excellent episode directed by industry veteran Jacquie Gould, all of whom we have admired for years!

Coming shortly after the death of the Julius character portrayed by Aleks Paunovic, “Deep Trouble” was the perfect way to increase the character tension of the viewers by placing our heroes Axel (Jonathan Scarfe), Jack (Nicole Muñoz), Violet (Keeya King) and Ivory (Jennifer Cheon Garcia) in an extremely dangerous situation that could have led to the death of another character before the series finale. It is season five after all and everyone may not survive!

Bravo to all involved, especially Jeremy Smith and Matt Venables and Jacquie Gould for the awesome episode which featured a fine young actor named Avionne Dean and a WormholeRiders favorite, Steve Bacic, who we have admired ever since he was featured in the X-Files, Stargate SG-1, Andromeda and recently in Debris!

Team WHR would like to give special thanks to all the writers of Van Helsing, to Chad Oakes and Mike Frislev from Nomadic Pictures, series creator Neil LaBute, and season five executives and producers Jonathan Walker, Todd Giroux, Morris Chapdelaine, Jonathan Scarfe, and Kelly Overton for bringing the Van Helsing story arc full circle since season one. As well, all our admiration goes out to all the crews and crafts people that make Van Helsing come to life on our screens each week for the past five years!

The “Deep Trouble” episode focuses on Axel, Violet, Jack and Ivory who are on their way to Washington D.C. to (hopefully) finish off Dracula The Dark One (Tricia Helfer) who has shape shifted into the body of the President of the United States in an effort to enslave the entire world!

Suddenly, but not unexpectedly, our vampire hunting heroes are attacked by misguided minions of the President who has taken control of the United States military with the express purpose of hunting down and killing vampire hunters, especially any associated with the Van Helsing sisters!

This awesome adventure forces our heroes to seek shelter in an abandoned mine to save their lives.

The cave ultimately turns out to be not so abandoned as we witnessed in the “Deep Trouble” episode. 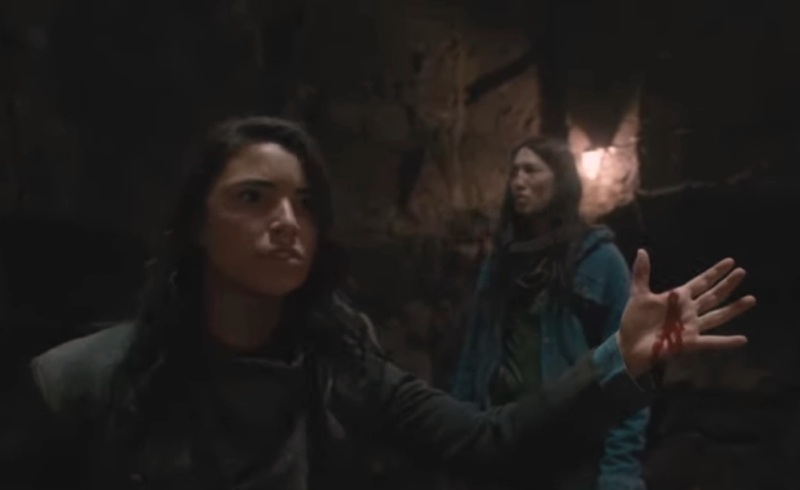 The episode opens with Violet sitting on a tree stump drawing a beautiful picture of Julius to commemorate for posterity that he saved her in the previous episode “Graveyard Smash”, sacrificing himself in the process.

The pain of what has happened is clearly visible in Violet’s as she draws the picture of Julius’ face.

Axel is unable to repair the truck forcing our vampire hunters to once again walk to their destination for the time being.

Axel takes note of the fact that Violet is in pain over the loss of Julius. Sincerely attempting to help, Axel tries to share her pain. Violet misinterprets Axel intentions and lashes out bringing the death of her aunt Scarlett’s (Missy Peregrym).

This outburst from Violet incident leaves a bitter taste in each other’s mouths that will soon be set aside as our group will be confronted by military operatives send by The Dark One to kill them.

As Jack, Violet, Ivory and Axel find themselves in a and old amusement park they suddenly come under heavy fire when a military helicopter attacks them, firing rockets at them destroying  much of their weapons stash.

Fleeing for their lives, our heroes seek shelter in an abandoned mine near the amusement park that contains a foul stench.

The mine is home to a feral vampire (Steve Bacic) who looks like a caveman from the ancient past on Earth. We will refer to this character as Caveman Dad the vampire.

It is obvious he was turned into a vampire either during or perhaps before The Rising. We will soon find out he is a father and is simply protecting his family, a young daughter named Emmett.

Caveman Dad attacks Axel while Jack, Ivory, Violet, open fire to save him. Unfortunately, the gunfire causes a cave in that separates Ivory and Axel from Jack and Violet who now each seek an alternate exit from the mine. Caveman Dad escapes, apparently unharmed.

Ivory, who has feelings for Jack, confides this to Axel as they proceed to find a way out of the mine. Ivory asks Axel how he deals with the lose of his love, Scarlett.

Although a sensitive subject for Axel, he shares details about the love of his life with Ivory who is concerned that the same thing could happen to one or more of our heroes as they seek to destroy The Dark One.

Unlike the angry discussion between Axel and Violet, Axel shares with Ivory that he really has never gotten over the loss of Scarlett.

As they approach a vertical shaft which brings us to scenes similar to Indiana Jones. Ivory and Axel successfully jump across but left many viewers wondering if a giant round boulder is coming next just like in “Indiana Jones and the Raiders of the Lost Ark”!

We segue to our Van Helsing hero sisters. Jack and Violet, who are planning their strategy to confront and hopefully defeat Dracula, The Dark One.

The battle, is looming in the not too distant future, and both are concerned about the future while working in the present to simply survive.

Still dealing with the loss of Julius, Violet shares with Jack that “love can cloud your vision” relating a story from season four when she lost her boyfriend Lee (Ryan Jinn).

Jack, who had never heard about this story, feels empathy for Violet. The discussion strengthens the bond between the sisters.

As they continue to seek a way out of the caves, Jack and Violet stumble into a section of the cave network that appears to be fully decked out with furniture, food, and other living amenities. Nearby they find a very young girl. Jack and Violet wonder how in the heck a young person could possibly  have survive since The Rising on her own?

Putting two and two together, Jack and Violet figure out that feral vampire that attacked them earlier must be the young ladies father. Violet and Jack hatch a plan to find Caveman Dad, bite him to return Dad to human forms and provide the little girl with a real father.

Being a survivor, Emmett instead rips the amulet from Jack’s neck and takes off to go find her Dad. As we mentioned above, this young actor, Avionne Dean (pictured right) did a superb job portraying Emmett!

Back to Axel and Ivory, Caveman Dad has hunted them down, attacking Axel. Ivory takes aim to kill Caveman Dad when Jack shows explaining what is happening explaining that she intends to turn Caveman Dad back to human form with a good bite to the neck. Emmett can apparently understand some English and returns the amulet to Jack.

Jack and Ivory go to find Caveman Dad to complete Jack’s plan. Emmett, Axel, and wait for the hopefully successful outcome. Jack uses a sharp knife to slash her hand as a lure to bring Caveman Dad to them.

Caveman Dad, a survivor in his own right, throws Jack aside, who is sent reeling and is knocked out. Caveman Dad is simply too strong, then attacks Ivory, apparently breaking her arms.

Hearing the sounds of battle and Ivory’s screams, Axel, Violet, and Emmett come back just in time as Jack jumps on Caveman Dad and successfully converts him back to human form. Now no longer Caveman Dad, just Dad, he promptly hugs his daughter.

Mission accomplished and none our heroes perished while in “Deep Trouble”. YAY!

As they leave the mine, Axel shares that they must make a very difficult decision.

Axel tells our heroes that have to split up if they have any chance of defeating The Dark One. Importantly so that both Van Helsing sisters cannot be potentially captured at the same time as they head to Washington D.C.

Our heroes splitting up leads to next weeks tenth episode, the pivot subsequent to “Deep Trouble” when we learn more in an episode called “The Doorway” which features the return of Vanessa Van Helsing as mentioned above.

As such, we will wait to pose new questions after we learn details about “The Doorway”!

Shout Out To Star Nicole Muñoz An Interview Through The Van Helsing Wormhole to Diggstown!

Fri Jun 11 , 2021
Welcome back Helsingers and WormholeRiders! This week, on Thursday June 10, 2021 we had the honor to interview Nicole Muñoz, star of the superb science fiction fantasy series Van Helsing returning in the fifth season to reprise her revealing role as “Jack” on a mission to defeat the evil that […] 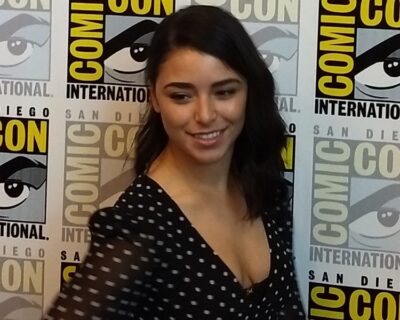