Subsequent to an exciting three episode story arc in the past when Jack (Nicole Muñoz), with the help of her Mother, Vanessa (Kelly Overton), escaped the tomb, and used a wormhole to time travel to investigate what happened with Dracula, The Dark One (Tricia Helfer)

The superb scenes at a castle with Count Dalibor (Kim Coates) in Transylvania, shot on location in Slovakia added realism to the Van Helsing story and were fun to watch.

The sad parts were Dalibor’s his lovely wife Olivia becoming Dracula, with help of Michaela (Heather Doerksen) who successfully perverted the sweet Olivia as well as turning vampire hunter Bathory (Jesse Stanley) into the evil Oracle.

Fortunately Jack was able to weaken Dracula in the past by draining some darkness from the neck when she bit The Dark One. After bottling the evil darkness up in an amulet, Jack, unable to open a wormhole portal like Dracula to get back to the present time, went aboard a sailing ship to return to North America after not being able to kill The Dark One in the dark ages.

As we learned in “Lumina Intunecata“, when we witnessed Dracula in the Oval Office at the White House, Jack was able to sufficiently weaken The Dark One to set up the remaining episodic adventure in season five of one of our most favorite science fiction fantasy series, Van Helsing!

We here at Team WHR are certain that we will all see more of Jack, and other cherished characters in future episodes before the Van Helsing saga completes it’s successful five year run. The reunion of sorts will begin with “State of the Union” when Doc (Rukiya Bernard) and Jolene (Caroline Cave) are reunited with the loves of their life at the end of the episode and continue throughout the fifth and final season of Van Helsing! 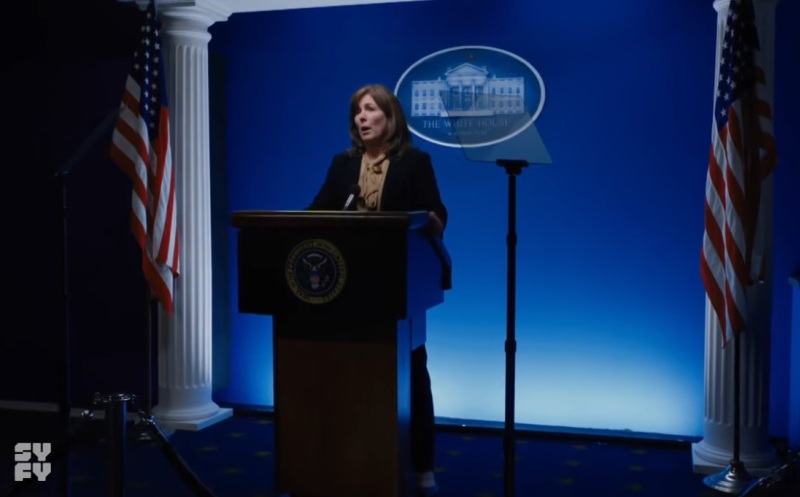 State of the Union:

The episode, dynamically directed by Leslie Hope and wonderfully written by Matt Venables and Jeremy Smith opens back in Fort Collins, Colorado at a Black Tec run military base.

Here we find Axel (Jonathan Scarfe) and Julius (Aleks Paunovic) are recovering from being exposed to the reddish orange powdery dust that has adversely affected their ability to self heal.

Unfortunately, Violet (Keeya King) and Ivory (Jennifer Cheon Garcia) are being held for their roles in the assassination attempt on President Archer’s (Jill Teed) life in season four.

Violet has been unable to convince the authorities at Fort Collins that the reason they attacked President Archer was that Archer actually infested with the evil of The Dark One, Dracula.

Things go from bad to worse for Violet and Ivory when an army Sergeant named Weathers (Luvia Petersen), who is in charge of detaining Violet and Ivory is ordered to lock them up until further notice. President Archer Dracula then orders that the prisoners must be executed by chopping their heads off!

President Dracula (the Jill Teed version), with Avery (Anna Galvin), who is actually the Oracle has been weakened by Jack in the previous episode in the dark ages. The Dark One is taking no chances and ultimately decides that she must kill any of the vampire hunters they suspect or encounter to protect their rise to power in the White House.

Violet, always on guard to protect her mission to find Jack and Vanessa, stages a suicide. Violet tricks one of the guards in her improvised cell and steals his security key card providing an easy escape from their cells. Sergeant Weathers believes Violet and Ivory, following them to the video server control center.

Examination of the video footage proves to Sergeant Weathers that things are awry when she witnesses President Dracula feeding on a human victims.

Weathers fakes the executions of the Violet and Ivory, returns their weapons and other items including the mysterious amulet that at one time contained the blood of Dracula, The Dark One.

Unfortunately, Violet does not realize that Jack had placed some of the evil into the amulet in the past and opens it up, accidentally allowing some of it to escape. The evil cloud quickly leaves the Fort Collins facility and heads out to find it’s master, Dracula the Dark One!

We segue to Julius and Axel in the hospital where they link up with Doc. Axel has awakened and helps revive Julius who is seen in bed still in a hospital gown.

Doc informs Axel and Julius that she is done, having completed a box of special “bullets”, a weapon to fight The Dark One. Doc informs them that she is leaving the fight to locate the love of her life, Jolene.

Meanwhile, back at the White House, President Dracula broadcasts on live television telling lies to the citizens country that a new breed of vampires is loose to cement her grip on the United States which has been damaged  by Jack who drained evil from her soul.

President Dracula, in the body of President Archer declares martial law, suspending all civil rights to keep her enemies, the vampire hunters at bay.

President Dracula and Bathory decide they need to feed and select a few of the presidential aides in the Oval Office. It is after this sequence that the inhabited bodies switch back to Tricia Helfer and Jesse Stanley.Both come to the conclusion they are in danger subsequent to Jack successfully draining power from The Dark One in the past.

Things get worse when Bathory decides to read her Tarot Cards to seek a solution to their dilemma. No luck as the Van Helsing’s; Jack, Vanessa, and Violet are materializing with each card that is exposed. Dracula and Bathory are somewhat relieved when an evil cloud enters the Oval Office, returning to Dracula, The Dark One’s body. Bathory and Dracula realize that it’s not everything that Jack drained from The Dark One.

Both are rightly concerned that the Van Helsing’s are on the hunt for both of them. The Dark One releases a reddish orb known as a Vanator to hunt down the rest of the power than had been drained from her by Jack in the dark ages!

Just before the final sequence of this excellent episode, we end “State of the Union” on an upbeat note for all viewers and fans.

We are with Doc who has found Jolene still working at the narcotic factory seen in season four.

Jolene and Doc hug each other, happy that their love has been restored.

This special scene nicely wraps the story arc for the Doc and Jolene characters in the Van Helsing saga who everyone had wondered about at the end of season four. It is a very nice touch that the series writers and creators are investing the time to tie up loose ends in this superb science fiction fantasy series!

As we proceed to complete the fifth and final season, make sure to tune in to watch the entire series on SYFY or watch on Netflix. In the meantime, we also suggest that you tune to SYFY at 10p/9c each week to watch the exciting season five concluding episodes. You will not be disappointed and will hopefully enjoy Van Helsing as much as we do!

Van Helsing Review Sisterhunt Scares the Vanator Out of You!