He could be thought of as a Stargate Hero. Shortly after Atlantis had been canceled, Joe Flanigan attempted to resurrect Stargate by raising the funds to pay for a sixth season.

Unfortunately, Joe’s timing was off and just as he was in talks with the executives of MGM, the owner of the franchise, declared bankruptcy. That put an end to the series since the actors who played the main roles moved on to other projects.

Flanigan was born as Joseph Dunnigan III in Los Angeles, California. His name was changed to Joseph Flanigan when he was adopted by his stepfather, John Flanigan.

When he was six years old, Joe Flanigan’s family moved to a small ranch near Reno, Nevada, although his stepfather objected to his ranch being called a “small” farm. Joe responds, “The trouble is, it is a small farm.” However, it is a somewhat mischaracterization of his stepfather who was vice president and board member of Annheiser-Busch Inc.

From the age of 14, Flanigan attended a boarding school in Ojai, California where he appeared in the school’s production of A Streetcar Named Desire. He later earned a history degree at the University of Colorado where he was a world-class skier and appeared in Coriolanus. He took acting to overcome his shyness and never planned on an acting career. He spent a year studying at the Sorbonne in Paris as part of the Junior Year Abroad program and is fluent enough to joke around with French reporters in French.

Flanigan had guest roles in numerous television series including Profiler, First Monday, Sisters, with memorable appearances on the hit science fiction series Fringe in 2011 until he got his breakthrough with his role on Stargate: Atlantis as Lt. Colonel John Sheppard, the military leader of the Atlantis Expedition. During the filming of Atlantis, he lived in Vancouver, British Columbia, where the series was filmed, during the week and flew to Los Angeles, California during the weekends where his wife and children resided.

Joe continued to write, creating the stories for the second season episode “Epiphany” and the fourth season “Outcast“.

An avid outdoorsman, Joe Flanigan enjoys downhill skiing, skateboarding, surfing, rock climbing, and mountain climbing. He took two prizes in the Waterkeepers’ Alliance downhill ski competition at Lake Louise in January 2006, an event fellow Stargate lead Richard Dean Anderson has attended as well. However, Joe explains that he decided to stop mountain climbing after he froze his cornea on Mount Rainier. He said at a convention that he realized as a father, “it was irresponsible of me to take those kinds of risks.”

Most recently, Joe has appeared on in 67 episodes of General Hospital as the handsome Dr. Neil Byrne.

Wed Dec 16 , 2020
Welcome back WormholeRiders! Using a Round Table format with video to introduce our guests as part of the WHRYouDecide series, today we are excited to explore science fiction and faith with two gifted, well known, and respected authors, Victor Acquista and Gary Morgenstein. These fine writers have incorporated faith into […] 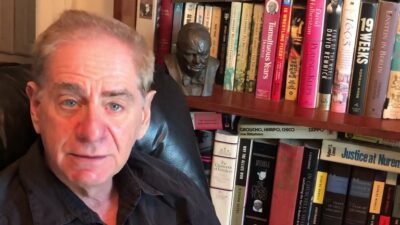