Well our detailed analysis of Fringe episode “Immortality” is complete (our analysis later today), and this week we were astounded when a vocal minority of the Fringies blew many minds on Fringe Friday February 11, 2011.

Last week we advised “Frankly Fringe Fans First Forget about the last Fringe Friday numbers”. This week we repeat that call except there were some new developments discussed below. 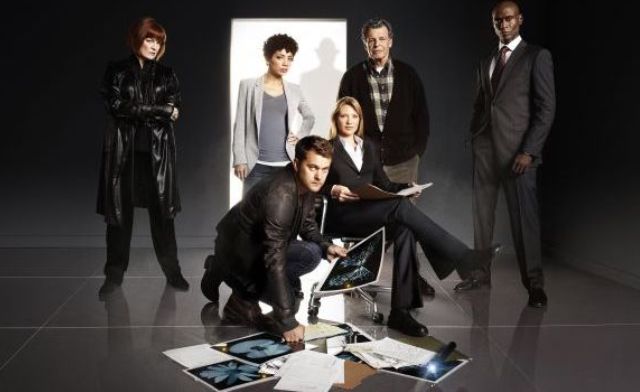 First, the tweet count was slightly higher for Fringe over the previous week with rumors of the series being renewed. We repeat that WormholeRiders News Agency does not believe anything has changed on a permanent basis. Fringe will be renewed in our opinion.

In fact several new sources (TV Guide, Michael Ausiello) have now joined the belief that Fringe is “a safe bet” to be renewed, the fans are indeed restless. We understand. if one simply consults with both Nielsen and TV By the Numbers, the answers might be perplexing since Fringe dropped in the ratings to 1.4 as we confirmed for ourselves, however we suggest that you do not discount the facts of the matter at hand.

While TV By The Numbers recently changed their opinion that Fringe is now likely to be renewed, and “still on the bubble” the ratings on Friday February 11, 2011 sent the Fringe fans into frenzy! Only seasoned veterans of the entertainment news industry fans knew that freaking out was not called for. Lets review again shall we? The crisis in Egypt continued to literally “suck the oxygen out of the atmosphere” of many shows including the favorite of the Fring

Third we examined thousands of tweets and found a disturbing trend. A faction of the Fringe fandom has decided to boycott the “Alternate Universe” episode because of elements of the Fringe series they do not “like”.They seem to believe that doing so “helps send a message of some sort” to the show runners! For goodness sakes people, the remainder of the season “is already in the can”. The show runners are building the story arc to a season four! Could you simply be a bit patient? Thank you.

Well we here at WormholeRiders News Agency did more hard work looking at a large number of factors to share with you our understanding. Fringe has NOT fallen forever. There are many factors that decide if a show or series will be canceled.  Last Friday represented continued draining of frequent Fringe fans to other broadcast networks in the “rating number” and “share” of the crucial 18-34 year old and 18-49 year old target groups.

Over and above the so-called Fringe fan boycott, the continuing crisis in Egypt sustained the siphoning off OVER  1 million viewers in the crucial time slots. Supernatural continued to enjoy a resurgence of OVER 1 million viewers as the chart illustrates below. This means one thing. There will be competition between Supernatural and Fringe from here on out. An important question arises: What happens if Supernatural gets a seventh season?

Add all the logical reasons up and it is easy to understand why Fringe dropped to a 1.4 rating and 5 share with approximately 3.717 million viewers.

I do know that Fringe fans were upset about something else. Fringe dropped below another series we follow, V Series. For the first time in weekly history, V Series whipped Fringe (discussed below) HOWEVER you need to look closer at Friday. Fringe was TIED for share and only POINT ONE below CSI in the critical 18-49 target group during the first thirty minutes. We would call that a WIN! 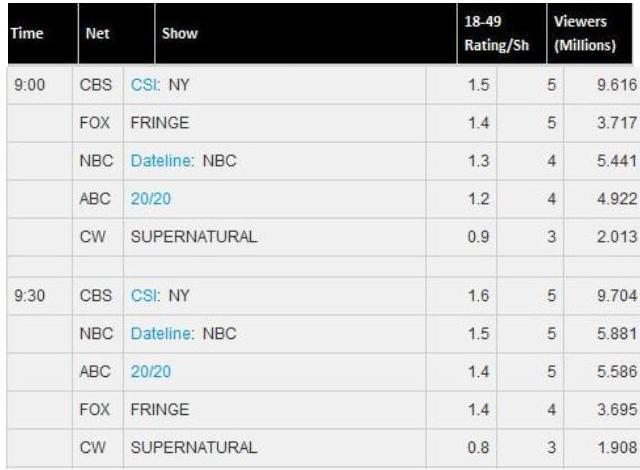 As WHR has stated before, season four of Fringe is still a certainty as we have reported previously. The facts are that the show runners have as much stated so. Some then ask why no season four announcement yet? Simple! There are a lot of episodes remaining and they want us to all watch LIVE. And we should!

Speaking of the ratings for the week ending Friday February 11, 2011, there is good news for fans of V Series? In this week the show now in its second season moved back up in the ratings against very steep competition. Now some may well say wait V Series is in fourth place on Tuesday evenings, and how is that an improvement?

Well if you look closely at the chart below you will see that V Series is on par for ABC series in the previous and subsequent hours! While I am sure that ABC would like to improve its Tuesday evening numbers, the question arises: Will V Series be renewed and could ABC move the series to another night! 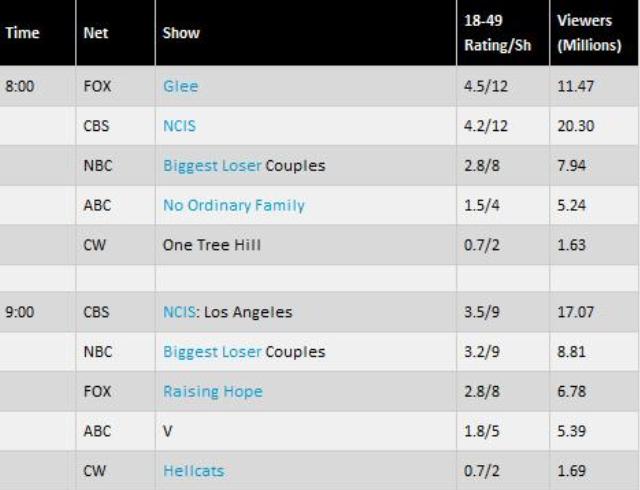 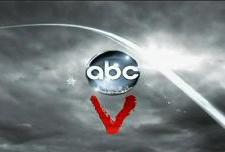 Is it any coincidence that V Series jumped up approximately 111,000 viewers to 5.39 from 5.28 million viewers the previous week with a 1.8 rating and 5 share as news indicated that President Mubarok would resign?  In fact if you look carefully at the ratings for all television shows many continued to suffer in the ratings as mentioned above due to current “Real Life” events which culminated in a frenzy that adversely affected programs later in the week.

As we stated previously what kills a series is when fans stop watching live week after week for an extended period. Moreover the biggest problem is with illegal downloading and streaming which has reached epidemic proportions according to the latest report issued January of this year about Internet Infringement.

AT5 - Welcome to the Madhouse - Amanda Tapping: “Wait! I Haven’t Heard a Large Woman Sing Yet!”

Tue Feb 15 , 2011
Hello GABIT Convention fans, Well, an early start greeted all the Gabiteers Saturday morning February 12, 2011 as AT5 at the Renaissance Hotel, Heathrow got underway. Waking up before sunrise on a weekend to head down for breakfast after the cocktail party must have been hard for some, but it […]