Welcome back WormholeRiders and Salvage Marines!

San Diego Comic-Con 2022 is currently behind us but certainly not forgotten! Team WHR had the great opportunity to interview three main cast members in the official Press Room and attend the panel which featured the latest trailer (included below) of the upcoming PopCornFlix streaming series Salvage Marines. Salvage Marines is based on the Necrospace book series by Sean-Michael Argo, who helped create the series along with Raphael Jordan and Jamie R. Thompson.

It was my pleasure to sit down with Casper Van Dien (Starship Troopers), Peter Shinkoda (iRobot), and Jennifer Wenger (Tales of Halloween). Team WHR had an advantage since we were one of the few press outlets that were allowed to sit down with these three outstanding actors! I must say that Kenn and I had a great time conducting an excellent interview. 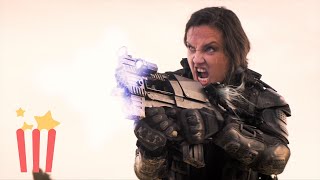 What better place to show and introduce a series like Salvage Marines than at San Diego Comic-Con? Where Starship Troopers had a panel 25 years ago (yes, it has been that long) and where science fiction adventure shows are the norm with shows like Fringe, Doctor Who and Firefly over the last decade, Salvage Marines was a delight to behold. It almost goes without saying that in particular, fans of this genre dress up like characters from Star Trek, Stargate, Doctor Who, Star Wars, and Galaxy Quest and we look forward to Salvage Marines Cosplay at future conventions!

One of the reasons I wanted this interview was Casper Van Dien. As a HUGE fan of Starship Troopers, I would be remiss not to get a chance to sit down and talk with Johnny Rico! Casper, Peter, and Jennifer were so much fun in the interview, and I could see their dynamic in person translate beautifully on the screen to the series.

Salvage Marines harkens back to the older science fiction days when the original Battlestar Galactica, Buck Rogers, Star Trek, and Doctor Who were seen on the airways. It gives you that sense of nostalgia while still maintaining the current political and social climates today. Corporate greed and life debt are the definite themes in this series, how once you accrue the debt in your life, you spend the rest of it trying to, albeit unsuccessfully, repay that debt. If that debt is not paid, it gets transferred to your children, and so on. Salvage Marines is the only way to repay it. However, the mortality rate is very high, so if you cannot make it, then your family will be the ones that have to be burdened with your debt.

The Salvage Marines panel featured the trailer (above) for the upcoming series, many other cast members, and the director of the whole series, Shaun-Paul Piccinino (Lady Driver), and co-creator Rafael Jordan (Ride the Lightning). Kevin Porter (Heroes with Issues), Shane Graham (The Son), and Linara Washington (Casting the Net) rounded out the cast at the panel for this beautiful series. Legendary actor Armand Assante (Mambo Kings) was missing from the panel, but his presence was still felt throughout, with the main actors praising him and his skill. Jennifer Wenger commented to me during the interview before the panel that she would go and watch him on set, even if she wasn’t needed that day, because he is such a legend, and you can learn so much from watching actors like him.

During the panel, Casper said something exciting; he noted that almost all space or science fiction shows were Westerns in space. He said Starship Troopers, Star Wars, and Firefly are all based on the formula of a Western; he said, “we are out there cowboying, cowgirling it.” Knowing that he said that and seeing all the movies he mentioned makes sense.

Linara Washington also made a great point about science fiction; it’s one of the only inclusive genres. No matter who you are or what you look like, you are accepted in that world. It’s kind of like the island of misfit toys, only better. “It’s almost at the forefront of things that are happening; it’s like having a blueprint before things actually go down.” The series feels relatable, even though it is “based in the far future” as Rafael Jordan noted, “their problems are our problems; it helps put you into the story.”

One significant point Peter Shinkoda brought up during our interview and reinforced during the panel is that Salvage Marines “drops us into a specific time…we all start the same place. It doesn’t matter your age, social status, and certainly not your race puts us on a playing field; we are all under the same common denominator. We all face the same obstacles”. That is why the sci-fi genre is much more inclusive, and you will always see more diverse casts than in any other genre.

I am happy that shows like this are being made on smaller streaming platforms like PopCornFlix. I am looking forward to people discovering the series, and I am sure the book series fans will appreciate and enjoy the series. Having an actor like Casper Van Dien at the helm of this series is a no-brainer; his resume speaks for itself. When you are part of one of the most iconic, cult-favorite sci-fi bug movies, who else would you want to lead the way? It helps that he has his friends like Peter Shinkoda and his wife Jennifer Wenger with him in the series, as it lends itself more to the believability of the situation.

There were some fun antics that the actors talked about during the panel. One such was when Kevin Porter, who plays Boss Wynn Masters, was reciting a monologue to his Marines, and the camera was on them; he forgot some of the monologues and started reciting Beauty and the Beast, “A tale as old as time” which made some of the cast almost break character, he even warned Jennifer with a visual cue not to break character or he would as well. I always like hearing about things like that on a set; viewing the series is much more fun. Shane Graham also mentioned how one of the other cast members, Ashley Mary Nunes (Beasts of the Field), pretty much outran everyone on set, and when he was in a scene with her, she got into a ditch, she was jumped into a 12-foot ditch and he “was like 30 seconds behind her.” It was a laugh for everyone in the panel and a cheering session for Ashley as she stood up and waved at all of us in the panel.

With Star Trek being the one science fiction show that dominates the airways, it is nice to see another type of show that can be added to the Sci-Fi list. Especially when you have a veteran like Casper at the front of the series, it makes it much more acceptable. I hope you get the chance to watch these great excellent series on Popcornflix and help bring more series like this to this streaming service and others.

Thank you to Casper, Jennifer, and Peter for the great interview and the rest of the cast and filmmakers for the fun and insightful panel. I look forward to seeing the reactions to this new series and hope there will be more seasons in the future. Salvage Marines premieres TODAY July 28th, 2022 on PopCornFlix! 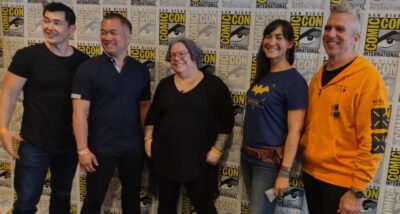