We’ve come to the last episode of season one of Day of the Dead as the numbers of our noble group of heroes keep getting smaller. When we began the series, everyone had regular problems found in any regular community. But over the course of the episodes and what was a timeline of one day, some people died and some rose to the challenge and learned new skills.

Luke (Daniel Doheny) learned that bullying was not a very useful skill during a Zombie apocalypse.

Jai (Dejan Loyola) learned to be a hero even though it cost him his life at the end of the last episode.

Paula (Miranda Frigon) learned a huge lesson, that her family was more important than being mayor.

Sarah (Morgan Holmstrom) learned to value her heritage and the wisdom of her ancestors.

Cam finally learned to accept his father for what he is, in whatever form worked for him.

As for McDermott (Mike Dopud), he learned that he loved his son, and got the opportunity to growl a lot.

Amy (Kristy Dawn Dinsmore) learned to stand up to her father (Garry Chalk) and not to let zombies or anybody else push her around.

And Dr. Logan (Lucia Walters), well it’s pretty clear that she didn’t learn anything, and will most likely continue to cause trouble in any future episodes if there is to be a season two of Day Of The Dead. We at Team WHR sincerely hope that it is renewed since there is so much more fun story telling remaining to be told.

We begin the last episode, directed by Jem Garrard, and written by the series creators Jed Elinoff and Scott Thomas, with Paula and Luke agreeing to send Trent (Trezzo Mahoro) to Carbondale Pennsylvania for his own safety.

Paula likely also wants him gone because Trent has hit on her five times. That kid is going to end up an INCEL (involuntarily celibate) if he doesn’t learn how to treat women properly.

Paula adds; “He’s persistent. I’ll give him that.”

After paying their respects to Jai as he lies outside the warehouse where he fell after saving them all, Lauren and Sarah say their goodbyes. Paula, Luke, Cam, Sarah, and Lauren head to Paymeart to rescue their friends. When they get there they see Cindy (Stefanie von Pfetten) lying on the floor dead and Pops (Jay Brazeau) has become a zombie.

That’s when Amy shows up swinging a chain saw. She’s ready to take on whatever comes near her. Amy is definitely not the obedient little daddy’s princess like she was at the beginning of the series. Good for her.

Amy wants to know what has happened to Jai. The sad looks of the others cause her to cry. She has lost her husband after only a few hours.

Amy explains that the mercenaries had come, gotten attacked by the people in Paymart who were turned into zombies. Then she dispatched the rest of them. Cam mumbles to himself that it must be the water contaminated by Cleargenix Corporation.

As Amy states that she is the last one alive in Paymart, someone shoots at and misses them. They scramble in different directions. The shooter turns out to be Rhodes (Kevin O’Grady), our favorite ass hat. He has managed to get a hold of Amy and is holding her hostage. Just because he likes to be thorough, he also has a suicide explosive device wrapped around his torso. He likes to give speeches, so he tells them that everyone in town is screwed. They can’t let any zombies escape so he plans on detonating himself taking everyone else with him. Suddenly, Capt. Pike (Marci T. House), who has also become a zombie attacks Rhodes. Seems Amy is not that clear about what being the only one left actually means. The Pike distraction gives Paula and Luke the opportunity to shoot Pike and grab Rhodes.

Dr. Logan is in Pittsburgh Pennsylvania. She enters a hospital room where a young girl is unconscious and is attached to a Respirator. “It’s time to let her go,” says Logan. As her the girl is disconnected from the equipment, Logan asks for some time to be alone with her. It is her daughter Eden (Bianca Lawrence).

Logan then injects her daughter Eden with a syringe of whatever it was she was concocting in the warehouse with McDermott. It doesn’t seem to work. Logan reacts with tears and sadness that she wasn’t able to save her little girl. We now understand why she was so obsessed with McDermott and the rest of the zombies. Still, a mother’s love for her child does not trump the lives of other people. Dr. Logan has a great deal to answer for.

Back at Paymart, Rhodes has been strung up on the back of Bobby Hart’s (Matty Finochio) tow truck.

Our hero’s have also set up a speaker and microphone on the tow truck so that everything Rhodes says gets amplified. Ass hat Rhodes has just become bait.

Rhodes finally becomes useful as he yells and screams and complains at full volume. It is not over for Rhodes, his retribution is due and he will pay the piper for being a conniving corporate ass hat.

While this is happening, Cam and Lauren get jostled together. Lauren finally acquiesces and kisses Cam. Is love in the air amid the apocalypse? Sarah and Amy have made their way to the abandoned caves. They pull boards away from the entrance so that the zombies will have a place to go. Everything seems to be coming together nicely. That’s when you know that something is bound to go wrong. It does.

A zombie gets a bit too close and grabs Cam’s leg, pulling him off the truck. He disappears into the zombie hoard. Lauren frantically jumps down off the truck and calls his name. With no answer, the others tell her that he’s gone. They have to get going. She climbs back onto the truck. That took a sudden unpleasant turn.

They eventually all arrive at the cave. As they do, the truck stalls several yards from the entrance. This does not please Rhodes. He is still complaining and criticizing the others. His nearly final words are, “I was ready to die to stop this.” Lauren, fed up with him replies, “then die.” He is lowered from the truck, the zombies catch up to him and start to tear him to shreds. His final words become, “Choke on ’em. Choke on ’em.” Nasty to the last. Midmeal, Sarah yells at the hoard, “Come and get it. Fresh meat.” One thing about zombies – they have a really short attention span.

The Zombie all get up from their feast and head for the cave. One zombie gets to Sarah ahead of the rest. She ends up struggling with him but Lauren and Amy come to the rescue and wack him over the head with a piece of wood. Do zombies pass out? I guess they do.

Once all three women are inside and realize there is no way out, Amy suggests that they can use three bullets for themselves to get out of this predicament. The zombies get closer. That’s when they have a brainwave. Sarah fires the pistol away from them to distract the hoard and run and hide. Fortunately, zombies are not very smart. They keep on going in the direction they were originally headed.

On the outside of the cave, Paula places the explosives around the entrance. Luke points out that Rhodes had made the explosives to be used to commit suicide. They will die if they push the button. Paula sets the control device on top of a sign that is leaning against the cave and tells Luke, “trust your mother.” They hurry back to the truck and Paula takes aim. The three women inside rush to the cave entrance. Paula fires her weapon. It’s a bullseye. The cave is sealed and no one has died except the zombies. Oh, and thank goodness, Rhodes.

We then see where McDermott is, among some remaining Zombies that he is leading, not too far away in town, but where is Cam? Did the Zombies eat him?

Later, after moving Bobby Hart’s truck back to the warehouse, Luke finds a cooler full of beer. His ability to knock the beer cap off the bottle using the truck’s grill makes it clear to Paula that Luke knows more about beer than he let on in the past. Lauren takes a beer and heads over to Amy who is mourning her husband where he fell. Lauren gives Amy the beer. She tells Amy that to cheat death, she has to live her life. That is what Jai would want.

We are given a peek at what became of Cam and Zombie McDermott. Cam tries to scurry away from the zombie hoard after getting pulled away from the tow truck. As he does, he comes across his father. Zombie dad snarls at the handful of zombies wanting to make a meal out of Cam.

Cam stands and gives his dad the wedding ring that he has been holding onto. He tells his dad that it’s just them now. Time to go home, I think, until some people in authority show up to take care of everything. Or, will McDermott decide that he should be in charge? If so, I have a little ditty for him: 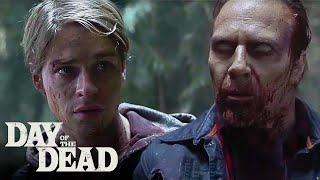 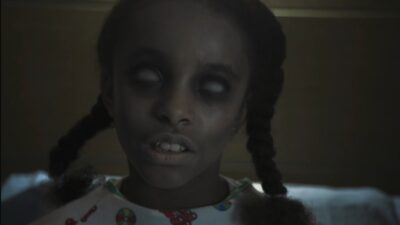 The first season ends in Pittsburgh, Pennsylvania. Here we find a depressed and foiled Dr. Logan is leaving the hospital. before she reaches her car, she gets kidnapped by some unpleasant-looking bad guys. Are these people connected to whomever her bosses are at Cleargenix Corporation? Quite likely.

It’s a pity that she doesn’t realize that as she is being hustled into a vehicle to be taken, who knows where, that her daughter Eden, back in the hospital, has woken up as a zombie. This outbreak in the morgue sets up a second season nicely. But will there be one more zombie? Only time will tell.

Sat Jan 1 , 2022
Welcome Back La Brea and Wormhole Time Travel Science Fiction Drama Lovers, We re-watched the entire first season to draw an interesting set of hypothesis at the end of our analysis. We believe that they may predict what is coming up for La Brea admirers in 2022. The second season […] 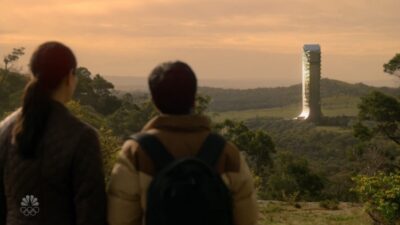