“To Anyone Who Can Hear My Voice” pivots towards the end of season one by returning to the beginning of the series. Very few people in Mawinhaken, Pennsylvania have been untouched by the Zombie Apocalypse.

Our grade for the eighth episode of Day Of The Dead is a Straight “A” for enjoyable, fun, campy entertainment value about the lives of the people of Mawinhaken, Pennsylvania, a quaint town overrun by the Undead. In an homage to George A. Romero and his classic “Night of the Living Dead” film series, what had befallen their town started with no one believing in Zombies. Now, the survivors, Mayor Paula Bowman (Miranda Frigon), Pops Parker (Jay Brazeau), Jai Fisher (Dejan Loyola), Lauren Howell (Natalie Malaika), Cam McDermott (Keenan Tracey), Captain Pike (Marci T. House), Herb (Garry Chalk),  Amy (Kristy Dawn Dinsmore), Luke Bowman (Daniel Doheny), Cindy (Stefanie von Pfetten), and Bobby Hart (Matty Finochio), who are now barricaded in the Paymart store.

All of them  are trying to figure out a defense against the Undead hoping that by some miracle, help will arrive in time to save them from becoming Zombies.

On social media, we have observed only a few detractors who are not enjoying this fun SYFY series. These malcontents, some of whom we have seen previously, are always trolling many television shows and movie threads, with negative, sometimes foul mouthed comments. We say to such people, go bother someone else while we enjoy our entertainment. Thanks.

Before beginning our analysis, we include a fun video courtesy of SYFY and are hopeful that a second season renewal is forthcoming from The Powers That Be. We shall see. 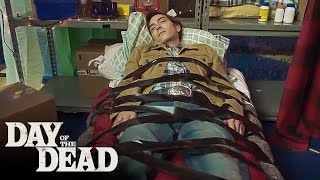 To Anyone Who Can Hear My Voice:

The episode, wonderfully written by series creator Jed Elinoff and artfully directed by Jem Garrard, finds us with the survivors holed up in the Paymart store seeking a way to survive the impending arrival of an invasion of Zombies that all know as their former friends and family members.

Bobby is on the roof as a sniper who is ordered by Mayor Bowman to open fire on the ever advancing hoard of Zombies. Things will not turn our well for Bobby who is jumped by Zombies who have taken to the roof of the Paymart to find a way in for a quick bite to eat!

Meanwhile, Detective McDermott (Mike Dopud), having escaped from Dr. Logan (Lucia Walters) Cleargenix Corporation chamber of Zombie horrors, is leading the assault on the town as we witnessed in the Pilot episode.

McDermott, who we know is a hybrid after being injected by Dr. Logan with some sort of noxious potion, recognizes things like his police badge, places like his old place of employment, and people, including his son Cam in this episode. We  are left to wonder (and hope) that McDermott will refuse to eat the survivors and maybe even help them survive during the final two episodes of the season?

With the Zombies preparing to storm the barricaded Paymart holdout, things look grim for the few people untouched by the apocalypse. Interestingly, Mayor Bowman is still feigning sadness over the death of Trey Bowman (Christopher Russell) seemingly overcome with grief. Viewers will recall that Mayor Bowman actually is responsible for the death of her husband in an attempt to kill Pops Parker.

Bowman has assumed command of the human survivors after Pops Parker finally realized that his humanitarian approach was a failed effort. In the meantime, both Herb and Bobby Hart are severely injured.  Herb has been stitched up, but Bobby has severe injuries after being attacked by the Zombies when he ventured outside.

Bobby was able to get back to Jai and Amy who tried to stop the bleeding, but are unable to do so. Jai, with Amy looking on at the tragedy, tells Bobby the truth, that his wounds will end up killing him.

Bobby expresses his final wish, that he be strapped to the table knowing that he will turn into a Zombie in the near future. Jai and Amy grant Bobby his final request as he passes away, certain to become a Zombie in a short period of time.

To make matters worse, Luke, depressed over the death of his father and thinking incorrectly that his mother rejects his being gay has left the Paymart.

Luke links up with Cam who tries to set Luke straight with some measure of success.

Mayor Bowman receives a notification on her phone that Luke has panicked and fled the Paymart.

In a rather questionable move, Bowman, Jai, and Lauren go outside in an attempt to find Luke and Cam. Before she leaves, Bowman deputizes Pops Parker to take over inside the Paymart.

Pops vainly attempts to rally the survivors that have become his responsibility. They should be safe from the Zombie Apocalypse that is descending on the Paymart so long as they can keep the barricades intact.

Good luck with that Pops!

While outside, Mayor Bowman immediately comes under attack by Zombies when she is seeking her son. It is here that we see our favorite pistol packing Paula dispatching the foul creatures by blowing their heads off.  You go Paula!

Viewers will recall that Captain Pike had called for help from Pennsylvania State Troopers. Only two officers arrive and are immediately overcome by Zombies. Despite a desperate plea from Pike, Pops refuses to let them inside since doing so will expose everyone to the Zombie army. Pike pulls her service revolver taking aim at Pops, ordering him to open the Paymart doors.

Pops, having learned his lesson when a Zombie set loose by Bowman nearly killed him stands his ground. It soon becomes a moot point. The Zombies kill and begin eating the State troopers who will soon become Zombies themselves. Captain Pike suffers a nervous breakdown and heads to the booze still inside the store. Pops seeks her out and offers condolences on her loss of fellow police officers. With things spiraling out of control, both understand there is nothing else that could have been done. 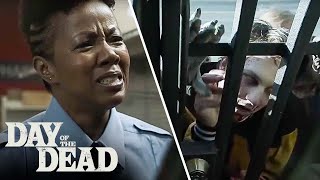 On their expedition In to the heart of Minwahaken, Mayor Bowman, Lauren, and Jai find Luke and Cam in a scene that is straight out of the Pilot episode, effectively returning viewers to the beginning of the series.

After escaping the Zombies, they are joined by Sarah Blackwood (Morgan Holmstrom), who, with McDermott’s help, survived being attacked at the Cleargenix Corporation.

Sarah reveals more of her past as a soldier and together the group seeks shelter with the goal of getting back to the Paymart. Meanwhile, Mawinhaken is slipping into a dystopian nightmare from which it appears that it may never recover from.

On the way back, the nightmare goes from bad to worse when Cam sees his father, Detective McDermott in the streets near his former place of employment, the police station. McDermott appears to recognize Cam as well as his old office in the police station. Although Cam seems to make cognitive contact with his father, Sarah says that he cannot be helped at the present time, but promises Cam that she owes McDermott for saving her life at the Cleargenix facilities and will help him deal with this latest development

The final scenes are of our survivors scrambling for their lives, when suddenly there are sounds overhead and military troops in armored personal carriers arriving on the ground.

Yay! Captain Pike’s call to the Pennsylvania State Troopers resulted in the military being alerted to hopefully save them all. Sarah hides from the military, some of whom she apparently recognizes, because of her past service drawing the episode to a conclusion.

Questions to be considered before the ninth episode “Death Comes To Paymart” airs next.

Will military troops be able to stop the Zombie Apocalypse?

Can Detective McDermott be converted back to human form?

How many survivors will ultimately be left inside the Paymart?

See you then as we find out the fate of the survivors, if any, in the tortured town of Minwahaken!

Day of the Dead Review and Analysis - Death Comes To Paymart As Survivors Try To Be Smart!

Tue Dec 14 , 2021
Welcome Back Undead Science Fiction Horror Fans, We are at the second to last show for the season of Day of the Dead. Naturally, since the title of this episode focuses on death at Paymart, we are fairly certain that someone is about to die. But who? Also, clues about […] 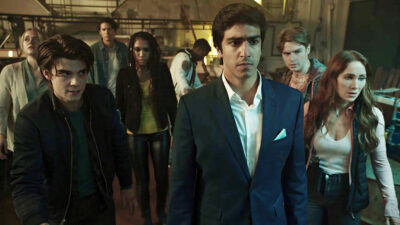