We are at the second to last show for the season of Day of the Dead. Naturally, since the title of this episode focuses on death at Paymart, we are fairly certain that someone is about to die. But who? Also, clues about who is responsible for the zombification of this small town and why, are beginning to come together. The zombie apocalypse doesn’t seem to be quite as accidental as we first thought made clear by the creators in an episode directed by industry veteran Jem Garrard.

Before my review of the eighth episode of Day of the Dead, good news. DOTD has bounced back, now averaging 218,000 live and DVR same day viewers for the United States, not counting Canada and SYFY franchises around the world broadcasting Day of the Dead. Much depends on these numbers for a potential for second season in which Zombies break out worldwide as George A. Romero envisioned in the “Night of the Living Dead” movie.

Importantly, in discussions between myself and Kenn, it appears DOTD may have been developed as a single season show, so there may not ever have been a plan for more. I am going to cross my fingers for Day of the Dead since SYFY recently renewed Chucky which dipped below 300,000 viewers on average. But we must compare Day of the Dead with their current flagship program Resident Alien, which averaged ~950,000 viewers, so a second season could be a stretch. We should know more soon if a second season is in the works or not. 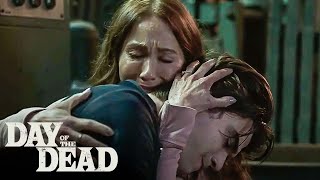 We begin with our diminishing group of survivors in Minwahaken, Pennsylvania. They include Cam (Keenan Tracey), Luke (Daniel Doheny), Paula (Miranda Frigon), Lauren (Natalie Malaika), and Jai (Dejan Loyola) getting “rescued” by a mysterious paramilitary bunch of mercenaries after they had left Paymart in the previous episode.

Once they are all safe in an armored personnel carrier, they realize that Trent (Trezzo Mahoro) is there as well. Nice to see Trent since I thought the next time we would see him, he would be a Zombie.

They also yell that one of their friends is still out there. Sarah Blackwood (Morgan Holmstrom) didn’t make it into the vehicle. But that was her own doing since she recognized the emblem on the door of the vehicle, that of the evil Cleargenix Corporation. She must have followed the vehicle to the warehouse that they were taken to because she will show up again later in the show to rescue them. Good for her. It looks like she will be a hero. The group also discusses the water that they had just seen being sprayed on a zombie and Jai realizes that he saw several people spraying “Water” on plants all over town earlier in the day. Maybe it wasn’t water, Jai reasons. While Trent and Luke argue, Cam speaks up to defend his new friend announcing to Trent that Luke is homosexual and they are all fine with it. Luke’s response is priceless, “just throw me out to the zombies. That would be great.”

Meanwhile, back at the Paymart, Herb (Garry Chalk) has found some over-the-counter medication for the pain in his stomach from the gash. He swallows the meds with a cup of water. Cindy (Stefanie von Pfetten), the sister of the lady with the branch in her stomach who has since turned zombie, and been dispatched, comes charging into the area and smacks Herb across the face. She is furious that he, as a doctor, didn’t save her sister. Pops (Jay Brazeau) comes to the rescue. Herb just wants to be left alone. Cindy responds, “I hope you die.” When Pops tries to calm her, she rebukes him with a death wish as well. Isn’t she all sweetness and light? I think there is some foreshadowing going on here.

Captain Pike (Marci T. House) is still feeling guilty about permitting the state troopers to die outside the store in the last episode. Amy (Kristy Dawn Dinsmore) approaches her to explain that people are getting scared and anxious.

As she asks what they are supposed to do, the power goes out. Great timing. It’s now the perfect opportunity to roam around in the dark and see what could possibly go wrong. Moments later, Pike discovers Herb on the floor. Is he unconscious or dead? It seems he’s dead.

The group that has been roaming around outside and was rescued, sort of, is ushered into a large room in an abandoned warehouse. Wow, this town has some serious economic problems. The mercenaries makes sure to lock them in.

Cam notices something shiny on the floor and picks it up. It’s his father’s wedding ring. We know where they are now, don’t we? Later, Lauren approaches Cam to comfort him about the loss of his dad. Cam makes a move on her. She doesn’t respond quite the way he was hoping. Embarrassed, he tries to explain that they are friends and it’s a difficult day, then he quickly vanishes. Time for Trent to show up and make a move as well. Uh, yeah, right. Guys, don’t try to get free sex in a crisis. Not a good plan. 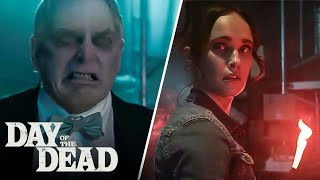 Speaking of comforting, Pops tries to comfort Amy as she pays her last respects to her father. She has lost her mother and a bunch of family and friends at the wedding, and now her father. This is becoming a really sad event for Amy. It’s so lucky that she still has her husband, Jai – oh, wait.

As Amy spends some time with Herb, Pops accuses Cindy of murdering Herb since she was the one that threatened him. Pops is all over the place here, comforting and accusing within almost a breath of each thought. It shouldn’t be a surprise when he is found dead a bit later. There is no one to mourn Pops, however.

The mercenaries, or glorified soldiers, are discussing what to do about the people they have hustled into the warehouse when Rhodes (Kevin O’Grady) shows up. Of course, he does, just like a bad acid drug trip, Rhodes is a nightmarish human being!

Rhodes nothing but stupid advice for the guards. Rhodes is definitely not a Rhodes scholar. He tells the men to get rid of the witnesses. I wonder if this is coming from him or his superiors? I also hope Rhodes gets what he deserves one of these days, to be eaten by the Zombies!

Trent and Luke finally have a chat about the things that have been a problem between them, such as Trent continually trying to push Luke at girls when, obviously, he should have been pushing Luke at boys. Paula shows up. As she does, Trent does exactly what he seems programmed to do – he hits on her. Is Trent being set up by the writers as one of the next people to get zombified? Mayor Mom, just finds Trent to be creepy.

Mayor Mom finally has the opportunity to have a heart-to-heart chat with Luke. She explains why she became mayor and that she seemed to have forgotten how to be Luke’s mom in the process. Luke forgives her and they give each other a hug. Jai is the next one to show up. Maybe Luke just needs to sit where he is and everyone will come to him. Jai tells Paula that he has looked around and there is no way out. Jai’s spidey sense seems to be tingling.

Lauren hasn’t moved from her spot since her chat with Cam. She notices that her hand is shaking again. Trent approaches her. It seems that he has gotten tired of being subtle so goes ahead and tried full-on creepy. He suggests that they both have sex. That goes over so well that Lauren’s hand grabs him by the throat and tries to choke him to death. I am really beginning to like that hand.

Trent breaks free and hurries himself back to the others. Lauren also heads back to the others. As she does so, she passes out. That is when the group realizes that they are being gassed with exhaust. Paula and Luke head for the door. They bang on it to be let out. Yeah, that always works – not.

As they waste their energy at the door, Jai looks for another way to deal with this current crisis. He opens a vent and begins climbing through the duct works, looking for a way out. He better hurry. They don’t have much time left. Jai finally finds the opening to the outside of the duct work and begins banging away at it.

After one final solid shove, he pushes it outward and the gas stops flowing into the warehouse. Jai also passes out. While this is all going on, Blackwood has shown up and is beating her way through the armed security guys to get to her friends. Personally, I think if she can beat them up, they are not really worth the money they are being paid. Or, maybe she just wants it more?

Pike and Cindy are having their own feud. Pike is sure that Cindy has murdered Herb and maybe Pops. She has pulled out her gun and intends on using it on Cindy.

Cindy pleads for her life. It seems that either Pike doesn’t have it in her to kill people or she is very weak because this is the second time that she lowers her gun. She can’t kill Cindy.

As they come out of the storage room where Cindy was locked up, it seems like Pike believes that Cindy is innocent, so somewhere along the way, Cindy said something that made sense to Pike.

Blackwood finally reaches the door and destroys the lock freeing everyone. The exhaust has cleared.

We soon learn that Jai is a hero. So is Blackwood. Everyone leaves to look for Jai.

Blackwood finds Jai. He has died. Poor Jai. Luke comments, “He saved us.”

So, what comes next?

Are they able to cure them?

Will McDermott become the Zombie Mayor?

Does our group finally learn who is responsible for the zombies?

Better yet, will Paula turn the hose on the people responsible for the mess?

Will they be able to understand what has happened to their town and the people in it who have been zombified?

Tune in next week for “As The Zombie Turns” – I mean, Day of the Dead at SYFY in the United States and CTV Scifi in Canada to find out about what ultimately happens in Minwahaken that could affect the entire world!

Day Of The Dead Review and Analysis Choke on 'Em If You Got 'Em!

Sun Dec 19 , 2021
Welcome Back Undead Science Fiction Horror Fans, We’ve come to the last episode of season one of Day of the Dead as the numbers of our noble group of heroes keep getting smaller. When we began the series, everyone had regular problems found in any regular community. But over the […] 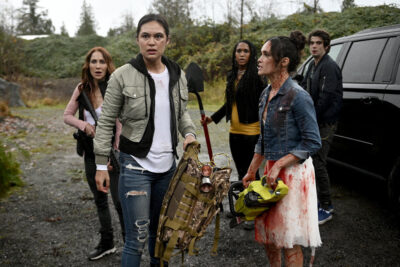