We are excited to present this WormholeRiders Roundtable, part of the WHR YouDecide Series, Featuring interviews of several Science Fiction and Fantasy writers. Many thanks to BHC Press for this WormholeRiders’ exclusive interview with one of our favorites, Gary Morgenstein!

In the late 19th and early 20th centuries, Western cultures were impacted by circumstances that made people regard society, and humanity’s place in it, in a whole new way.

The world watched as revolutions and world wars wasted lives and how new, innovative governments that promised utopias would turn into oppressive and murderous regimes. The spread of new ideas, like evolution, caused people to ponder whether survival of the fittest was the right worldview, and whether people were expendable. Out of this centralized government and secularist agar grew a new genre of storytelling. That genre is known as dystopian literature.

Dystopian literature has proven to be a hugely important medium for storytelling, exploring a (ahem) Brave New World, with its new spin on all the tyrannical possibilities imaginable for government to oppress a population.

Libertarians (that extreme anti-government crowd that grew out of the new fears of dictatorial regimes) fell in love with Ayn Rand, and Atlas Shrugged became their book of devotions.

Russia’s tendency to send music composers and writers to Siberia if they did not produce Party-accepted works led to Ray Bradbury exploring the exact temperature that a book burns in Fahrenheit 451. If you were in high school in 1984, then you read Orwell’s 1984. I know, because I was in high school in 1984.

One might have thought that after the fall of Soviet Communism, with the subsequent dissipation of all the fears of nuclear war and government takeovers and international crises abated, that the general interest in this story genre might have waned.

But it has not waned at all. Indeed, millennial hunger for dystopian literature has brought about The Hunger Games. The Handmaid’s Tale is enjoying a revival with its Hulu series that premiered in 2017 and is still going strong. While this genre of story is new in the whole history of storytelling, it is proving to be perennial in popularity.

So meet author Gary Morgenstein, who has created his own dystopian world, and he welcomes you to explore it. Gary has a strong career in the world of Science Fiction Entertainment, and he is also an accomplished playwright with a funny new drama about racial harmony, A Black and White Cookie, scheduled to premiere later this year. He has many published works, including Take Me Out to the Ballgame, The Man Who Wanted to Play Center Field for the New York Yankees, Loving Rabbi Thalia Kleinman, and Jesse’s Girl.

His current book and dystopian fantasy, A Mound Over Hell, invites readers into the year 2098, where America’s defeat by Islam in World War Three leads to somber and austere mandates. Even baseball is being extricated as a public pastime, as the story opens with the game beginning its final season ever. It is the first of The Dark Depths series, with the second book A Fastball for Freedom set to be published by BHC Press in 2021.

Because dystopian literature requires a writer to create a government and society as well as all the characters that live in it, I thought I would ask Gary a few questions about how he went about crafting his story.

Q    Your book A Mound Over Hell describes a dystopia defined by a government that bubble wraps the population, where all outlets that might inspire a difference of opinion are outlawed. Even the game of baseball is hanging on by the thinnest of baseball threads. How were you inspired to create this world?

A   My wife and I were having a Sunday breakfast of everything bagels with a shmeer while listening to The Beatles when the idea of America losing World War 3 and a society run by Grandma with baseball facing its final season popped into my head. I know, what exactly was on that bagel? In the novel, I blend three of my loves: baseball, sci-fi and dystopia into a rarely done genre. Then I blow up our concept of America, like making baseball reviled for representing the old, failed Empire. In 2098, what if social media was banned under the Anti-Narcissism Act and you had to have real relationships? What if integrity replaced our criminal justice system and lawyers were outlawed under the Anti-Parasite Laws? What if all acts of patriotism was illegal? World-building is tricky because you have to follow your own rules, even if it complicates your writer life. One of my characters, a single woman, gets pregnant. In a world where the family is preeminent, single mothers wouldn’t be allowed to keep children. And in a world where the children are revered after four million died in WW3, abortion would be illegal. I think one of the most jarring experiences in dystopian science fiction is when the author ignores the laws they created because they’re looking for an easy way out.

Q   The medium of futuristic fantasy is a proven venue for presenting real truths in the real world. How do you believe your personal life experiences in our times have contributed to your construction of this fantasy?

A   Science fiction writers live in the world of “what if?” For America to have lost a world war to Russia would’ve been boring, too much like the Cold War. Ditto for losing to the Chinese. But Islam? That struggle is anchored in the present time. The clash of cultures is deep and dark. As with all sci-fi, you walk the tightrope between fictionalizing and predicting. Obviously, I’m taking the current clash between Islam and Western Civilization to a nightmarish possibility. We sci fi writers are all about that, aren’t we? I go beyond any contemporary politics or “isms,” political ideologies, and offer something very different. Readers can accuse me of siding with the right or the left, but truly, I wanted to build a post-democracy world to challenge readers’ views in these polarized times. What if we do something unique? Then I create ordinary people caught up in these extraordinary events, forced to heroic – or not so heroic – behavior. At the end of the day, it’s all about your characters.

Q   Tell us about your favorite character in your book. As a writer myself, I know that the character that embodies the most important perspective and supplies the most pivotal contribution to the story line is not always the protagonist. Who is this character, and what is it about him/her that you don’t want your readers to miss?

A   That’d be Zelda Jones.  She’s a late thirties, African American woman, smart, slightly chubby, tough and self-deprecating whose life is a train wreck. Zelda’s failed as an artist, theater performer and then as a teacher; not liking children was a problem. Zelda’s always had romance issues with men and women (in this world there’s no distinction between gay and straight, all that matters is if you love someone). If there’s a way to screw up a situation, Zelda will find it, do it, say the wrong thing, drink too much beer, eat too many donuts, insult the boss. She doesn’t suffer fools, has a big heart and regrets the trouble it’s caused her. And she sure does get into trouble while providing a ground zero view of this America on the cusp of the 22nd Century. I adore her.

Q   Through your writing, how do you hope to impact your readers?

A   Through our mental illness known as creativity, writers, like all other beings on this planet, want to touch someone. We want to move them, make them think, perhaps re-think, re-feel. One of the underlying themes of all my work is faith and a spirituality, non-religious, of believing in ourselves. In these terrifying times, writers need to be positive and honest. As dystopian writers, we present a future that might be scarier than this and show how humanity will get through it. My characters live in the brutal aftermath of a world war, yet they still want to love and eat and drink and hope their family is well, whether in The Family of America or the Caliphates of the Islamic Empire. Not much different from today.

Q   What are your plans for the future?

A   Other than Keeping Calm and Practicing Yoga? I’m focusing on establishing a normalcy within the new normalcy by writing away. With A Fastball for Freedom, Book Two of The Dark Depths series, scheduled for publication in 2021 from BHC Press, I’m busy on Book Three. Besides novels, I’m a playwright. My funny drama about racial harmony, A Black and White Cookie, will premiere post-crisis at New York’s Theater for the New City. I’m also looking at alternative ways to deliver theater in these social distancing times. Novels are easy. It’s just me and you, reader. There’s some exquisitely magical about that experience, reaching out to a perfect stranger who invites me and my world into theirs. Finding ways to connect to strangers is so critical now. Maybe Keep Calm and Read More should be the new slogan.

Between comedic plays about racial harmony and a dystopian book series about a world gone wrong and in need of redemption, Gary Morgenstein is certainly steeped in the idea that there must be a way for humanity to transcend social dischord and reach a place of harmony. In A Mound Over Hell, he uses America’s favorite pastime as a catalyst to get society back on the right track. Either that, or baseball might bring about World War Four. Since world wars are partly responsible for creating this genre of literature in the first place, it is a story that feels, somehow, like dystopia coming full circle.

The WormholeRiders News Agency Team and I look forward to sharing more real news with you in the future.

2 thoughts on “When the World Falls Apart: A WormholeRiders Roundtable Interview with Gary Morgenstein!”

Anatomy of an Animated Corpse: William Schlichter Shares Perspective on the Undead in No Room in Hell!

Mon Apr 13 , 2020
Welcome back, WormholeRiders and Writing Lovers! We are excited to present this WormholeRiders Roundtable, part of the WHRYouDecide Series, featuring interviews of several Science Fiction and Fantasy writers. Many thanks to BHC Press and Gary Morgenstein for this WormholeRiders’ exclusive interview with William Schlichter! My first introduction to a “zombie” type […] 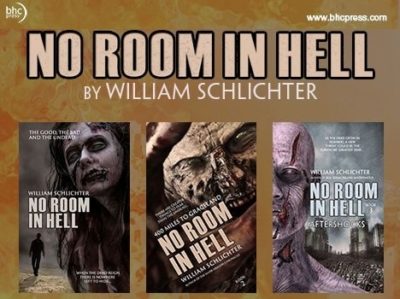