“The Hades Awakening” was written by Tim Kring, Dave Kalstein  and Brandon Guercio and directed by  Wayne Yip.

In “The Hades Awkening we get to see several Cicadas awakened and ignited in their quest for answers in true Jason Bourne style, in this week’s exciting episode of  USA Network‘s  Treadstone.

This week, Doug McKenna (played by Brian J Smith) has a chance to learn a thing or two from his handlers, and we get to see him perform a nifty McGyver trick.

We catch up with Soyun of North Korea (played by Hyo-Joo Han), who recovers from her gun shot to the gut, only to return home and experience a proverbial shot to the heart: her family is gone and she has another service to perform for her handlers.

Finally, John Randolph Bentley (played by Jeremy Irvine) takes a psychedelic tour of his mind, and discovers memories of being captured by the KGB.

Moreover, it was young Petra’s (played by Emilia Schüle) job to turn him into a ruthless killing machine. Petra is the one, it turns out, who called it his “true purpose.”

The episode begins with Doug riding a dirt bike as he goes to former oil rig buddy Mike’s trailer home (played by Ian Davies). He wants to learn why Mike was at the pharma factory and what may come next. Mike has already snitched on Doug to the police, however, so the conversation was cut short when a handful of Special Forces law enforcement officers (also on dirt bikes) descend upon the trailer home right after Doug arrives. But this setback for Doug turns into a great opportunity for us: We finally get to watch Doug access that clever Jason Bourne-like ingenuity as he tracks down who it is behind his life as a Cicada.

It turns out that the Special Forces dirt bike police are already known to Doug: they were his team that helped take down the pill factory, obviously dirty cops doing mercenary work for Treadstone agents. The Treadstone agents catch up soon after the cops. Treadstone wants to know what happened to their guy who they sent to “expire” Defective Doug in episode three — the guy who Doug’s wife, Samantha (played by Tess Haubrich), shot and killed in their living room).

But Doug does not seem so defective anymore.

Doug’s brief scuffle with the Treadstone agent leads to a chance for Doug to track the agent to his hotel. There he whips out a little McGyver-style ingenuity, turning a mini LED flashlight and a cell phone he lifted off some guy into a long-range laser listening device.

With it, he scans from window to window outside the hotel, locating the exact room of the Treadstone agents, and he eavesdrops on the conversation going on about him. Pretty cool!

Fortunately, Soyun’s gun shot to the gut happened not too far from a nearby village, and she is able to make it there before she collapses. The locals get her to the doctor in time.

Soyun is treated, gets the bullet extracted, and with pain meds in hand she is ship-shape enough to be on her way.

Her next stop? Home to find out if her family is still safe since she completed her awful assignment.

A homecoming reunion was not meant to be. She finds the place empty of family, her handler is waiting for her instead.

He explains that her son is with his grandmother, and her husband is on an “assignment.” Reunion will have to wait until after another job is performed. 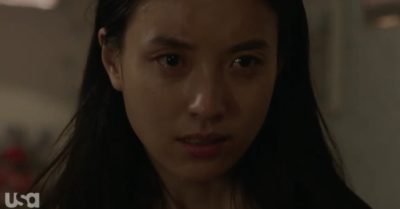 The handler leaves Soyun, but he does not leave her with any specific information about what her next assignment might be. Just a stern word of caution that she had better obey to protect her family.

But wait! Not so fast!

Soyun stows herself away in one of the cars of her handler’s entourage as he leaves. Like Doug, Soyun has now switched her Cicada talents to tracking her North Korean branch of the Treadstone puppet masters!

When the Smoke Clears

Two episodes ago, in the Kentucky Contract, we left American Cicada assassin Stephen Haynes looking for his daughter, and CIA agent Matt Edwards promised to help him. This week we enjoy a wonderful chess-like maneuver in this game of undercover operatives.

The daddy-daughter reunion was really a ruse by Haynes to flush out his Treadstone handlers. Haynes knew they would try to overtake him at that location, and he simply beat them at their own game. Unfortunately, in his Cicada rage, he strangles his female handler to death. I guess we won’t be getting any information out of her.

Meanwhile back at CIA headquarters, Ellen Becker (played by Michelle Forbes) has a heart-to-heart with her superior Dan Levine (played by Michael Gaston), who tells her, in unvarnished terms, to have her guy Edwards kill Haynes.

Dutifully Becker does convey that message, but Edwards, who is able to assess the data surrounding Haynes during his time with him, is not inclined to follow that order.

Better to not kill off those who may be able to clear the air about what is going on, and Haynes is one of those people. He is the smoke that can help lead the way to the gun, and to the people pulling the trigger.

A Mental Mess in Budapest

Last episode we left John Bentley embarking on a psychedelic trip. This episode we find ourselves along for the ride. His story begins in Krakow, Poland where he was caught by the cute red headed KGB operative, the younger version of Petra. She caught him off guard with a crack to the back of the head. From there on he was Petra’s toy.

With mind-altering drugs and torture, and lots of romantic interludes, she turned him into not merely a turncoat, but into a slave who had no memory of his former American allegiance, and even unable to recognize the people who knew him.

Which, by the way, made it gleefully easy for John to torture and kill his former brothers in arms including fellow agent Matheson (played by Oliver Walker). He gets to review these not-so-happy memories in flashback fashion while lying on the floor of an early 70’s, Eastern European opioid den.

With Katya (played by Maja Simonsen) looking over him and coaxing him through, the LSD trip has to be cut short when the den gets raided and, although John is experiencing the rolling shudder effect associated with his acid trip – he still seems to be fully able with deft precision to take out the KGB agents trying to apprehend him.

Until Petra runs into him.

John is back on the KGB farm at this point, and probably with a cracked rib or two.

What Else We’ve Learned This Episode

This episode presents us with an interesting tidbit that will undoubtedly turn into a plot tie-in. In the conversation Doug overhears with his makeshift long-range listening device, he learns more about the “Patty Vernon situation.” Patty was the drug operation queen bee that Doug killed in episode five: The Bentley Lament.

Patty controlled a “hundred million dollar market share in bootlegged opioid pills” and Doug learns that “Lang pharmaceuticals wants to take it over and make it legal.” We also learn that they are putting together a team to “…get it all cleaned up. The cops, Doug, and Samantha.” Ellen Becker and Dan Levine will have their hands full!

I wonder what this may have to do with a dead North Korean general, a Russian ICBM, and a bunch of sleeper assassins that have been recently awakened?

1. A Big Pharma company wants to get in on Peggy’s bootleg action. We look forward to knowing more about that company.

4. Stiletto Six: the race is on for obtaining control of it. Tara (played by Tracy Ifeachor) and Sebastian (played by Eric Kofi-Abrefa) are on the hunt for the broker Yuri Leniov (played by Julian Kostov) who can make this deal happen, but we must wait until next episode to see where this goes.

5. Senator Eamon Wray: We were briefly introduced to him in episode four: The Kentucky Contract. In that episode we learn the senator successfully got a Russian Trade Agreement passed – and further, it got quickly approved by the Kremlin – right after North Korea’s General Kwon got assassinated. This came up in a conversation between CIA agents Ellen Becker (played by Michelle Forbes) and Dan Levine (played by Michael Gaston). Becker is keenly interested in this set of facts, and how it may relate to Stiletto Six. Levine shows interests as well, but their discussion on this subject causes Levin to pivot it to another subject that keenly interests him: Edwards’ progress with Haynes. Now in this episode, Levin orders Becker to tell Edwards to kill Haynes.

Levine is obviously not as interested in bringing in Haynes for the sake of gathering intelligence about the unauthorized Cicada program as he is quashing the phenomenon. We also learned in “The Kentucky Contract” that Levin’s strength, according to Becker, is that Levine can protect them from Senate Intelligence Committee questions of their activity as they investigate who Becker and the possibility that Treadstone is still active.

Levine hired Becker to cover the Kwon situation, and Becker has expressed her concern that Levine knows more about the Kwon assassination and the Stiletto Six problem than he is letting on. Defy Levine, and there may be Senate Intelligence Committee consequences to pay. But there may be even more than that at stake with Levine in charge.

Eamon Wray is on the Senate Intelligence Committee and (dare I say it?) he knows a thing or two about the not-dead-yet Treadstone program, and Levin is in the Senator’s back pocket (or vice-versa). I have another theory, too, but I dare not say it without some more information.

Whether I am right or not, all these Cicadas are pursuing truth, just like the First Generation Treadstone operative Jason Bourne. Finding answers, and unveiling the face of the Man Behind the Curtain, is the engine that drives the Treadstone story.

This episode provided us some very satisfying moments in the pursuits that are being made by the Cicadas; Soyun, Doug McKenna, and Stephen Haynes. We also learn much more about John Bentley’s KGB conditioning by young Petra in the past.

However, we do not yet know where he is now, nor what he ultimately decided to do with the knowledge of his KGB conditioning subsequent to escaping from the CIA safe house in the 1970’s.

Maybe we will learn another interesting twist, now that 1973 Bentley ended up back in the arms of his lover, the young Petra?!

Team WHR suggests you tune into USA Network next Tuesday at 10 PM EST/PST for the next exciting episode of Treadstone!

One thought on “Treadstone – The Hades Awakening: Bourne To Be a Cidada!”

Wed Nov 27 , 2019
Welcome back WormholeRiders and Van Helsing Lovers! With the superb fourth season of Van Helsing now nearly half over after beginning September 27, 2019, we here are #TeamWHR’s are pleased to resume our coverage of this outstanding series that is broadcast to the delight of Dracula admirers each week on […]