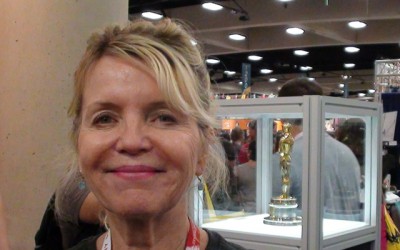 On Sunday July 12, 2015 at San Diego Comic-Con, we had the distinct honor of meeting and interviewing Kathy McCune of the marvelous McCune Masterworks.

The encounter with this lovely and legendary woman occurred during our visit to the Profiles In History exhibit located in the Grand Hall of the San Diego Convention Center. Our mission was to see if we could chat with Joe Maddalena and members of his fabled company, Profiles In History! 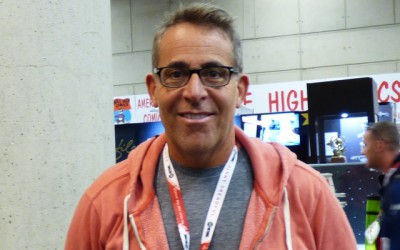 As always, Joe Maddalena presented the Profiles In History exhibit in the Grand Hall of the San Diego Convention center during the annual San Diego Comic-Con convention.

Not only was Mr. Maddalena as wonderful and enjoyable to chat with, we were graced by his hospitality with opportunities to interview Joe Maddalena, Kathy McCune, Brian Chanes and Jonathan Mankuta about the outstanding artifacts that delighted fans from around the world who were attending San Diego Comic-Con. We include the interviews below for your enjoyment. 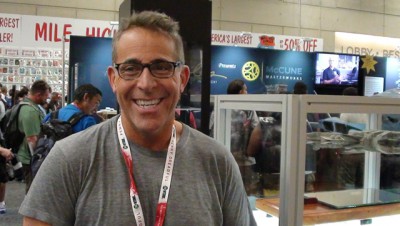 This year the artifacts on display were fantastic featured were many, including the historic Alderaan Crusier Blockade Runner from Star Wars, the superb submarine from U-571, and the cool X-Men jet from the second movie in the series!

Like many of the fans who stopped by the exhibit, this editor was in awe to see a golden Oscar, the famous Star Wars Alderann Cruiser also known as the “Blockade Runner”, a Star Wars Tie Fighter and X-Wing Fighter, U-571, the X-Men jet, the Spaceballs spaceship RV, and several unique works of art created by the genius’ at McCune Masterworks! 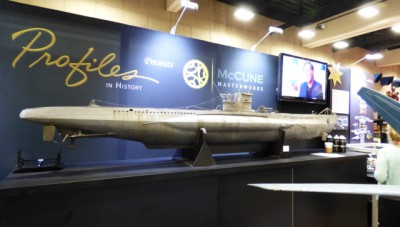 Kathy McCune, owner of McCune Masterworks, was partner and wife of Grant McCune, an American special effects designer whose entry into the world of Hollywood began with the great white shark in legendary 1975 film, Jaws. This was an uncredited creation that set a foundation in the entertainment industry for Grant McCune and his lovely partner, Kathy McCune! 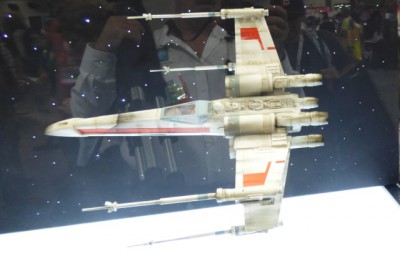 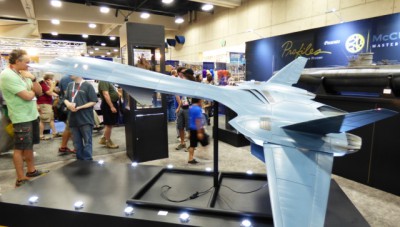 Every McCune creation is a masterpiece; a kinetic and experiential innovation, truly bespoke and crafted by the finest artisans in the field. Drawing on our extensive history in Hollywood special effects, complex electromechanical engineering, and the most exquisite modeling, hallmarks for which McCune is recognized worldwide, each McCune Masterwork produces an engaging experience through interactivity, fantasy, or storytelling. McCune Masterworks decade-rich portfolio includes more than 20 years of fabulous creations commissioned by the most discerning private collectors. Each piece reflects the client’s imagination, with details as personal as a signature.”

Having been an admirer of Mr. Maddalena and his fine crew at Profiles In History for many years, we here are WormholeRiders strongly suggest you visit the Profiles In History and McCune Masterworks web sites, and prepare for the fabulous Hollywood Auction September 29 through October 1, 2015 when history will be available for you to own for yourself!

In closing for now, we express our sincere thanks to Marc Kruskol of MJK Public Relations for arranging the interviews with Joe Maddalena, Kathy McCune, Brian Chanes and Jonathan Manukuta!

We hope to see you all later this year beginning September 29th for something definitely “Worth It”, the fabulous Hollywood Auction by Profiles In History!

Stay tuned as the WormholeRiders News Agency Team announces more of our new WHR You Decide video interview series during 2015 and beyond!

Mon Aug 24 , 2015
Welcome back WormholeRiders, The Expanse and San Diego Comic-Con admirers! Coming on December 15 of this year is one of the most exciting new series The Expanse! This fantastic new scripted television series will be focused on humans embarking on the deep space exploration of our solar system, something that […] 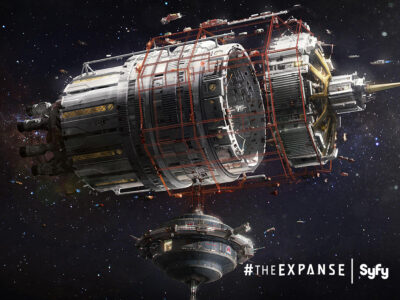