Welcome back WormholeRiders dedicated to Agents of S.H.I.E.L.D.!

This Agents of S.H.I.E.L.D. reviewer remains impressed with the outstanding level of production quality values, character development, script writing and overall progress as the story arc builds to the series winter finale before the Christmas holiday season in an episode.

“Ye Who Enter Here” was written by imaginative Paul Zbyszewski and directed by the talented Bill Gierhart! who did a wonderful job with a great episode!

I cannot speak for all admirers of this series, but this reviewer remains ecstatic about the outstanding adventures we are treated to each week via the Agents of S.H.I.E.L.D. series! 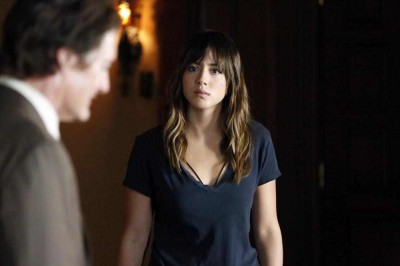 With only one episode remaining before the series winter break, the exciting details of “Ye Who Enter Here” laid a solid foundation for the tenth episode “What They Become”, when Skye (Chloe Bennet), seemingly abused by Agent Ward (Brett Dalton), who has been “Rolling in the Deep” will meet her father (Kyle MacLachlan).

“What They Become” airs Tuesday December 09, 2014 on the ABC Network at 9 PM, 8 Central time, a sure to be exciting episode that this reviewer is looking forward to when Skye is delivered to dear ole’ Dad by her unrequited lover Ward! 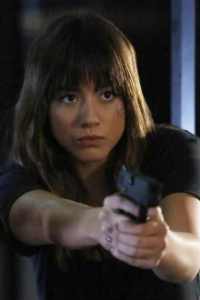 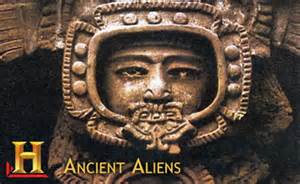 This reviewer loves these types of stories where theory and hypothesis are woven into the tapestry. Having been a admirer of the theories of the fantastic series, Ancient Aliens, as seen on the History Channel network, in “Ye Who Enter Here” we find out more details concerning the ancient alien presence and their ancient city as envisioned in Agents of S.H.I.E.L.D.! 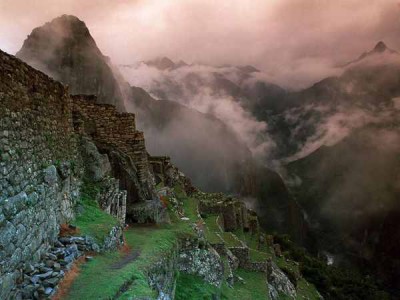 Most people we know love the concept of aliens visiting Earth in the distant past, long suspected of helping the natives build the Great Pyramids, Machu Picchu and other ancient archeological structures!

Many believe the aliens not only helped prehistoric human kind develop. Other believe aliens enslaved us fir their nefarious purposes. Still others believe that the aliens were believed to be deities that the edifices of modern religion were created from. Still others think the aliens are still here, monitoring Earth to this very day ! 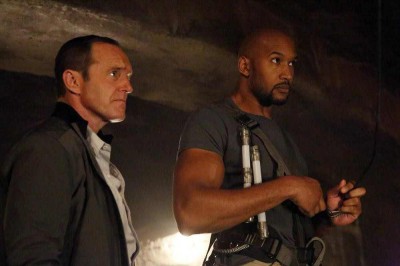 Regardless of whether you the reader believe in aliens or not, in “Ye Who Enter Here”, Phil Coulson (Clark Gregg) has his team attempt to find the entrance a mysterious alien city.

The ageless story arc is a foundation long been enjoyed by hundreds of millions, if not a billion or more human being on our fair planet Earth! 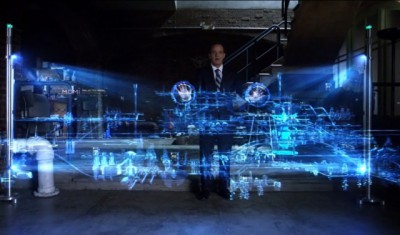 In “Ye Who Enter Here”, we begin to unravel more of the fascinating aspects of the Marvel Universe that have dovetailed the adventures in Agents of S.H.I.E.L.D.! 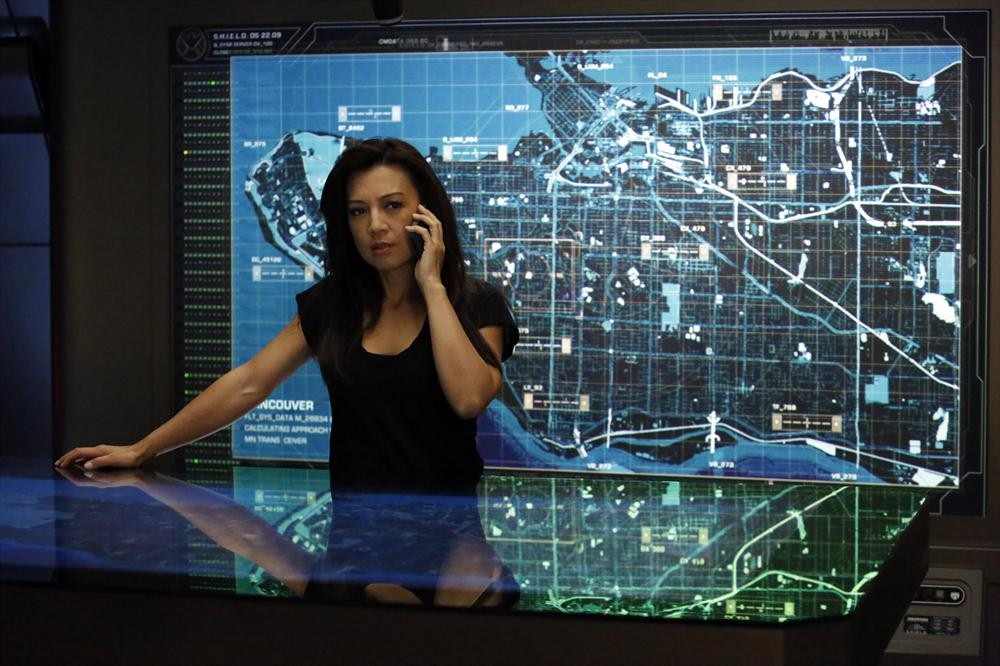 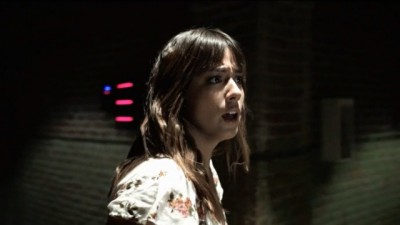 As the as rest of the agents seek to rescue Raina (Ruth Negga) subsequent to confirming that Hydra is after her, all hell will break loose in the process as we open the Skye (Chloe Bennet) who is experiencing a series of frightening nightmarish dreams about her mysterious past, no doubt related to her father (Kyle MacLachlan), “The Doctor”. Skye cannot fathom all the details yet, but she is convinced that something horrific is about to happen. 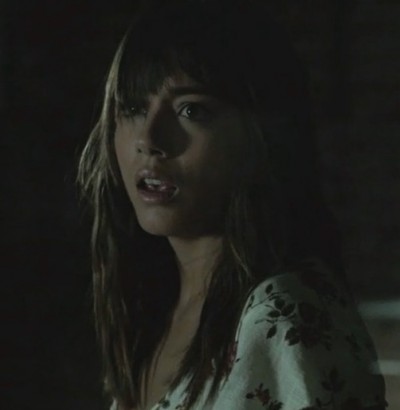 This reviewer enjoys the acting talent of Chloe Bennet, a gifted and gorgeous actress who brings realism to her role in Agents of S.H.I.E.L.D.

Skye is dealing with the identity hidden from her for what the protagonists believe are good reasons.

A short time later, Coulson shares with his team that evil Hydra has obtained the feared Obelisk!

To make matters worse, horrific Hydra has now employed an expert who knows how to use it, none other than dear ole’ “Dad” aka “The Doctor”! 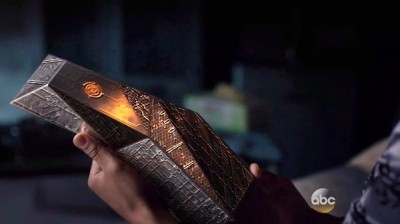 We have learned that there is a potent, in fact a devastating weapon contained within the Obelisk. A secret, known only the is that in order to activate the weapon, one must be inside an ancient alien temple located in the secret city that in buried under the city of San Juan. 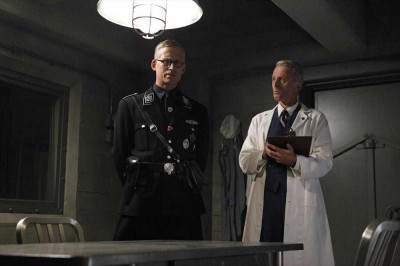 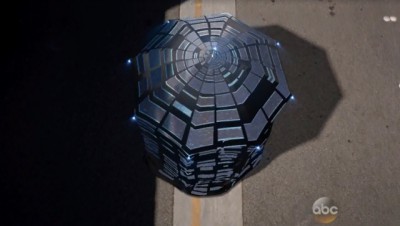 Fortunately, a couple of Agents Sam and Billy Koenig (both portrayed by Patton Oswalt) are there to ensure Raina’s escape. Sam uses of a special type of cloaking umbrella to affect their escape.

Raina, now allied with SHIELD receives an a lanyard. Coulson sends an extraction team consisting of Melinda May, Skye and Lance Hunter (Nick Blood) hoping to keep Skye from confronting her crazed father now employed by Hydra. This is suspected by Skye who is still wondering about “Dad”.

A fun scene ensues as Mac (Henry Simmons) probes Bobbi (Adrianne Palicki) about her rekindled romance with Hunter. The two of them know a secret that Lance does not. Bobbi wants to keep it that way. 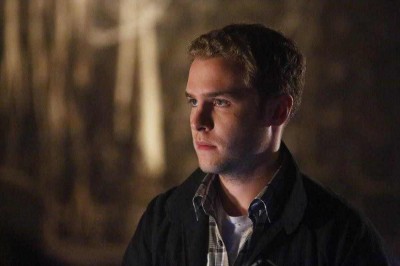 Agent Jemma Simmons (Elizabeth Henstridge) has bared her soul about what has transpired between her with Agent Leo Fitz (Iain De Caestecker). Jemma has been confused feelings she went undercover at Hydra after were both left for dead by now Hydra operative Agent Ward (Brett Dalton).

During these poignant moments in “Ye Who Enter Here”, The two former best friends finally have a heart to heart discussion. It does not go as planned. Fitz reveals that he can no longer work with Simmons, whose heart is broken in the process. 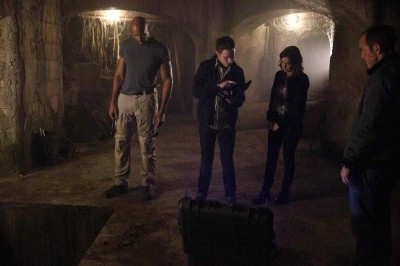 This reviewer strongly believes these two will reconcile their friendship much like Lance and Bobbi, perhaps even leading to matrimony!.

Bobbi has a San Juan contact who we learn is running behind schedule late for their meeting. Bobbi uses the delay as chance to voice her concern about the mission to Coulson.

Bobbi is concerned that SHIELD, and Coulson is there to do accomplish something other than destroy the alien device weapon, perhaps to dovetail his own obsession as we learned in “The Writing on the Wall”. 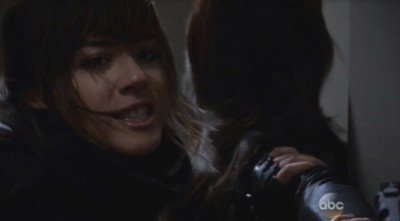 Coulson calms Bobbi the only purpose of the mission is to stop Hydra from enslaving the world. The SHIELD team works to gain access to the hidden city, a story of the haunted fort tower where they are digging is revealed. In the process, we meet Diego (Carlos Rivera Marchand), a local friend of Bobbi in San Juan who provides information about the ancient alien temple. 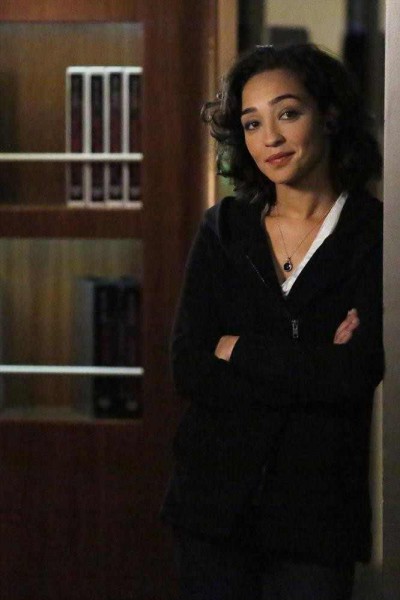 The SHIELD team is in Canada to save Raina. True to series form, with great fight choreography between Bennet and MingNa, Skye is about to get her ass kicked by Agent 33. This reviewer was happy when Lance comes to her rescue! As this reviewer has shared previously, the snarky Lance is a fun addition to the team.

Subsequent to the wonderful fight sequences, Raina shares a secret with them that she can handle the Obelisk without any negative effects.

Once she realizes Hydra has the device, she tries to flee. May crashed the SHIELD van into the bad guys ensuring their escape and calming Raina in the process.

Agent 33 also escapes and informs evil Whitehall of the incident where she was able to implant a tracking device on Raina. 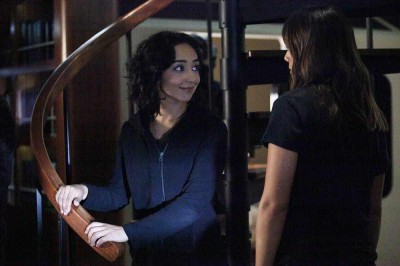 Back story regarding Skye’s father (that we have been waiting for about Raina) is revealed as they escape. Skye is told by Raina that her father is not really a bad person, but has been manipulated by life’s circumstance into what he has now become.

Raina shares that she herself was a lost soul before she met Skye’s father. Finally Raina shares with Skye that “Dad” has been seeking his daughter his entire life. Raina describes that the Obelisk is a Divining device with the power to help “the worthy inherit the Earth”. Naturally, Whitehall is convinced that Hydra is the only organization “worthy” enough to possess the Obelisk. 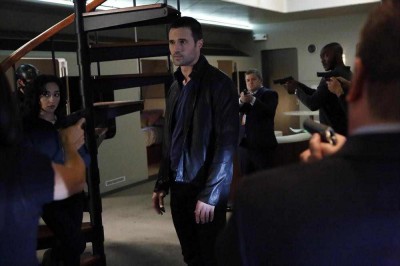 It is at this point in the action that Skye’s earlier sense of foreboding comes into play. In a desperate attempt to warn her Agents of S.H.I.E.L.D. team mates, Skye tries to contact the Coulson.

Evil Hydra has planned ahead when we learn that Skye’s communication has been blocked via the tracking device! 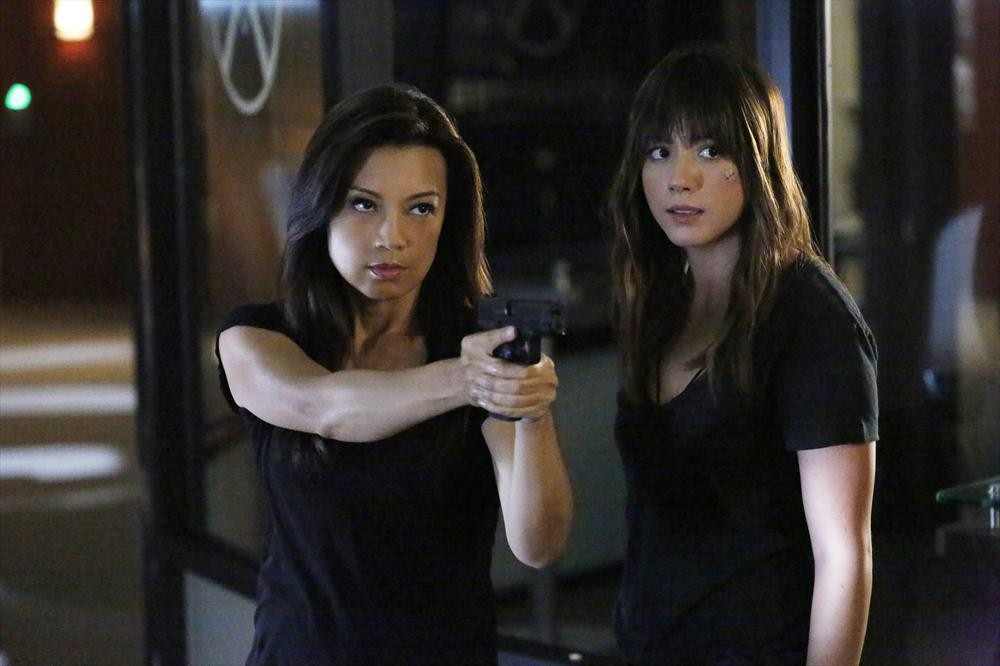 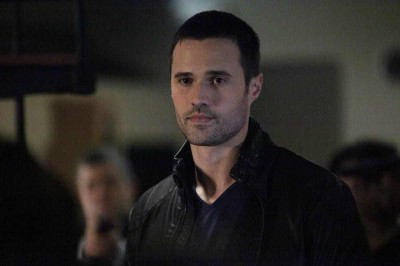 Things quickly go from bad to worse when Four Hydra QuinJets surround the cloaked SHIELD airbus. Dirt bag traitor Ward and a team of Hydra agents come aboard. They demand Raina and Skye!

In a melodramatic scene, an ultimatum is give: surrender Skye and Raina of he will kill everyone aboard the SHIELD airbus. In an emotional moment between Skye and Melinda May, who have developed a warm respect for each other, Skye says that she can handle herself. Raina reminds Skye to bring along her tablet with the map of the ancient alien city. 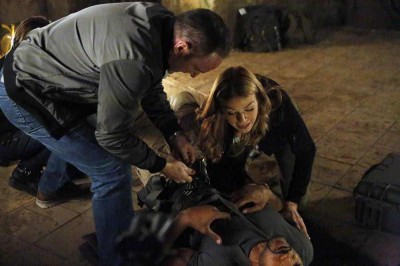 As the episode winds down, Mac is lowered into the pathway to the secret city. As he reaches the bottom, Mac reveals an alien symbol to the group which glows a reddish hue that somehow causes the exact alien symbol to appear on Mac! It appears an ancient curse is protecting the city!

The team pulls Mac to the surface who is suffering from some alien affliction as his eyes glow red! In what appears to be his last act on Earth, Mac yells at his comrades to run. 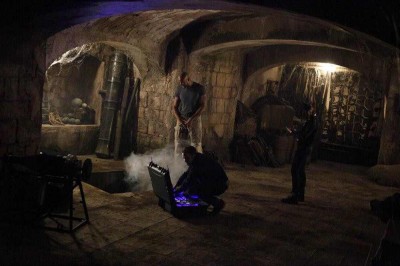 Now fully affected by the alien curse, Mac attacks all of them. An “icer” has no effect.

Fitz holds a gun with real bullets on Mac. He is unable to pull the trigger! Bobbi shocks Mac to the point where he falls into the hole. Coulson orders the alien hole to be sealed with Mac inside!

The episode ends with a conversation between Agent 33 and Whitehall. She advises the evil Hydra leader that Ward has captured Raina and Skye. 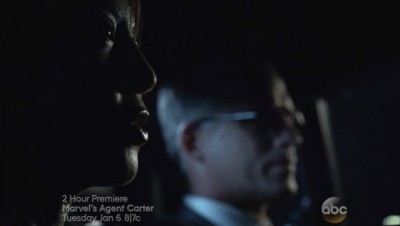 We learn that Ward was only supposed to capture Raina. Ward is obviously still obsessed with Skye, Whitehall raises and eyebrow in curiosity.

This leaves me to wonder if the Ward character could be a triple agent? This hypothesis is reinforced when Whitehall learn that Ward did not destroy the S.H.I.E.L.D. airbus per his orders. Agent 33 is instructed to destroy the SHIELD airbus as the screen fades to black!! 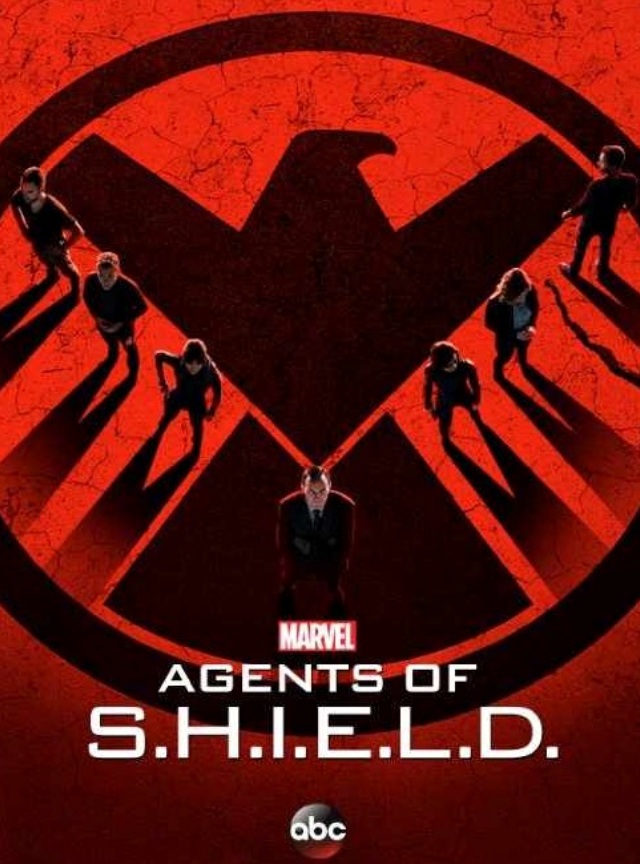 Or as many of our readers and visitors often do, visit WHR on Twitter, or visit me on Twitter by clicking the text links or images avatars in this news story. I and Team WHR look forward to Seeing You on The Other Side!”

Rebekah Kennedy is the Perfect Match!

Sun Dec 7 , 2014
Welcome back WormholeRiders to WHR You Decide!, On Saturday December 06, 2014, we were honored to interview the gifted and gorgeous Rebekah Kennedy, a rising star in the Hollywood television, movie and web series entertainment arena! During our interview with Ms. Kennedy, we were pleased to learn first hand about […] 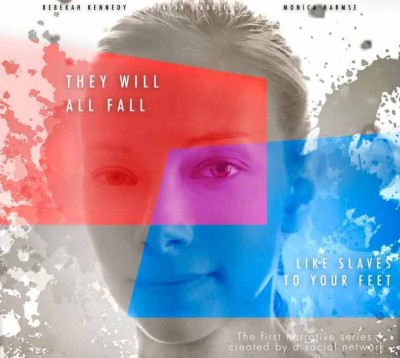