It turns out that it’s neither Carter, nor Jo Lupo (Erica Cerra) who have company, but instead, it is S.A.R.A.H, the house itself, who has been entertaining all night. 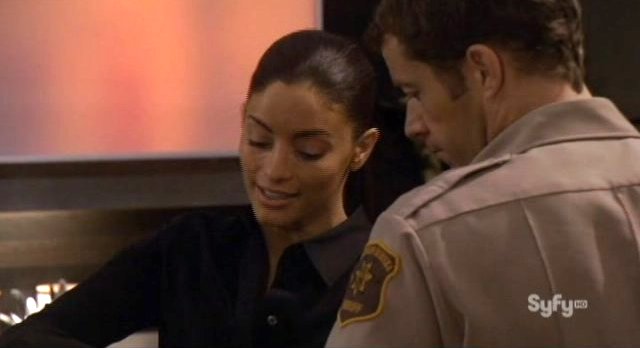 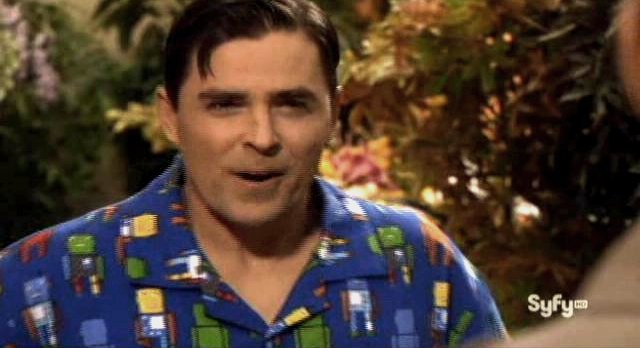 Deputy Andy (Kavan Smith) has been having  android/robot/something sex with his favourite A.I., Carter’s house. Of course, having all these sentient beings keeping him company is beginning to wear on Carter. And not being a geek like everyone else in town, he is just a little uncomfortable with sex between what he considers mechanical beings. He even compares Andy and S.A.R.A.H to a toaster, which does not go down well with his house. This is a “Hold that thought” moment, since Carter’s prejudice gets a smack in the head later on. 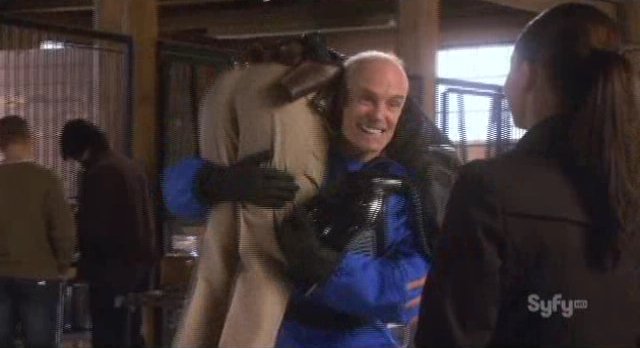 Carter gets called to attend to Dr. Welke’s barn where a cow has liquefied. Dr. Welke is studying cow mites and is part of the Astreus crew. Down climbs Taggart (Matt Frewer), from the barn’s loft. Matt has not been seen since season 3. This complicates Jo Lupo’s life a little. She has tagged along to the barn with Carter. 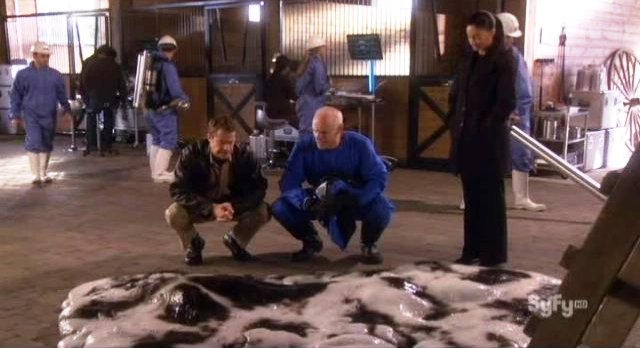 There is an uncomfortable silence since Jo has no idea if Taggart is still in love with her alternate self from before their trip to 1947. Carter prepares to head back to G.D with a jar of liquefied cow as Taggart and Jo head off to do some more investigating. But, Carter’s Jeep has some sort of material all over it that has fallen from the barn ceiling. We just know that is going to negatively affect the jeep. Do we get to watch another Sheriff Carter vehicle bite the dust? 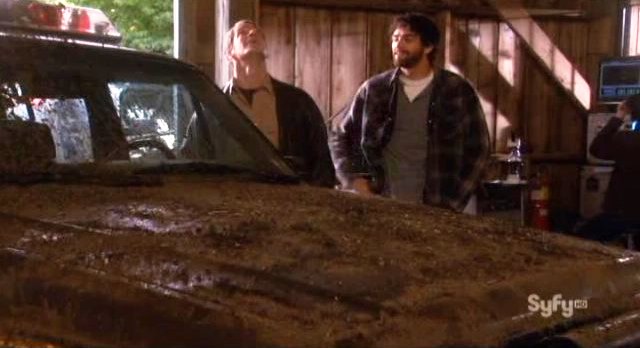 Dr. Grace Monroe (Tembi Locke) greets  Dr. Henry Deacon (Joe Morton) as he is working on setting up communication between Titan and Earth. She has just been named Commander of the Asteaus crew.  Grace identifies Henry as the Ground Commander of the mission. It looks as though their futures as a married couple will be spent  a billion miles apart once they get all the bugs out of the mission. 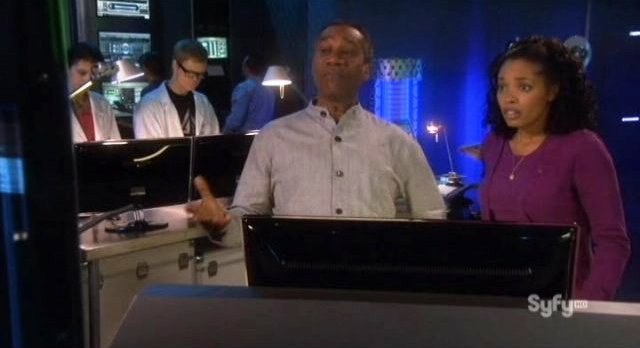 Back at G.D, Carter has arrived at Allison Blake’s (Salli Richardson-Whitfield) lab. She appears to be reading something on a pad. But, it is not her. It is a hologram. As Carter attempts to get snuggly with it, she approaches him and accuses him of ‘virtual harassment’. Cute. 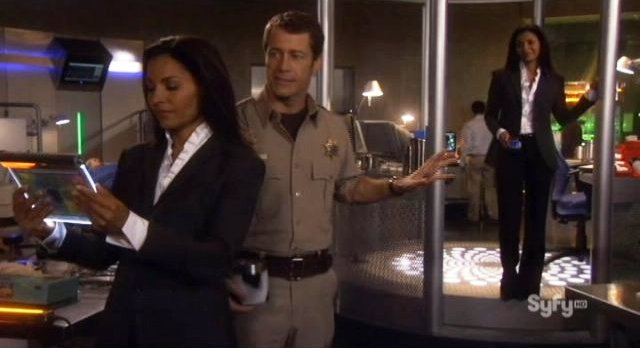 It’s official portrait time at G.D. Everyone is on hand for the grand occasion. We are reminded that Dr. Parish (Wil Wheaton) is just an alternate for the mission as Dr. Doug Fargo (Neil Grayston) attempts to rub it in. Dr. Holly Marten (Felicia Day) does her best to try to diffuse the situation by reminding Parish that being an alternate is an accomplishment in itself. Zane (Niall Matter) becomes very annoyed at Jo for backing out of the mission. With everyone on hand, this is the perfect time for something to go wrong. Nothing says emergency like a bunch of people running out of a room. 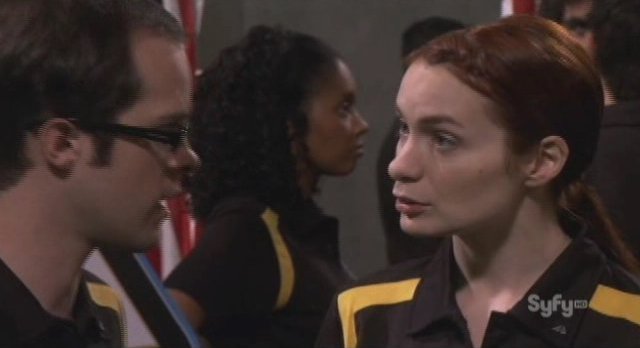 The FTL (Faster Than Light) system has activated itself. While Carter and Deputy Andy hurry to get everyone out of the room, Carter gets a little too close to the FTL. Andy runs to him and pushes him out of the way just in time, but gets caught up in the beam and rocketed faster than light to Titan. Titan is not a comfortable place to be, even for Andy. Henry and Grace immediately begin to discuss options. One of the most overused statements in scifi is the, “what if we can solve this problem using (techno babble), somehow”. In this episode, Henry gets the ignominious honour of saying, “What if we rigged a portable FTL Drive, somehow”. It’s a bit overused, and is one of the very few errors in a very well written episode.

One of the interesting things I noticed about this episode is that it was co-produced by Colin Ferguson, who seems to be producing a great many Eureka episodes these days, and Stephen Welke, possibly the person responsible for giving Dr. Welke his name. It’s a great way to stay connected to Eureka. 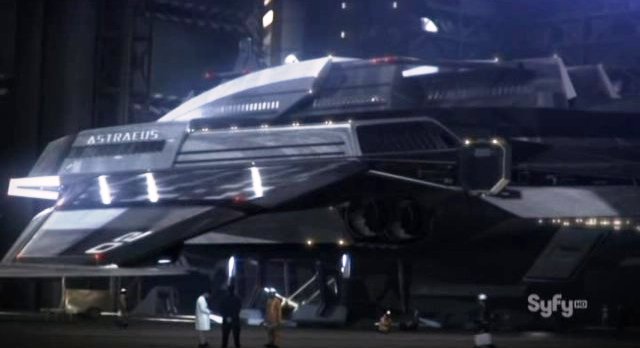 Meanwhile, Carter, who was slightly injured when Andy saved his life, discusses with Alison what could have happened to Dr. Welke’s cows. One of the best lines in this episode is Alison’s, “Did the cow have many enemies?” She says it with a smile to indicate that she is kidding. It prompts Carter to reason that maybe Welke has enemies. The first thought is that since Welke is going to Titan, the person with the most to gain would be an alternate who could sabotage Welke’s work so he can’t go. 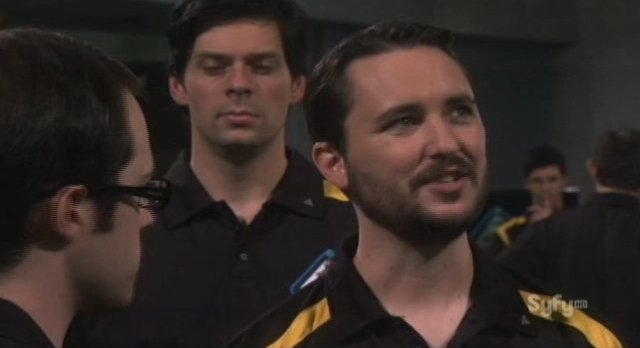 Of course, the first suspect Carter considers is Mr. Malicious, himself, Dr. Parish. Carter comes across Parish at Cafe Diem where he is celebrating his good fortune with some colleagues. Parish denies sabotaging Welke. As they walk out of the cafe, Parish slips on something. Its Carter’s jeep, completely melted into a pile of goo. I love it; not only is this a, ‘bash Andy’ episode, it’s also another, ‘destroy Carter’s cruiser’ show.

It turns out that Jo Lupo turned Taggart down when he proposed to her. She discovers that it seems to be, “Because it’s what I do.” She says this more to herself than Taggart. During this discussion, Taggart introduces his Big Brown Bats, genetically altered to be able to tolerate the high methane environment on Titan. However, they are gone. They have escaped their cage and are now causing havoc throughout Eureka.

Henry’s clever FTL idea is put to use as Fargo places the device onto the launch pad to send to Andy. Unfortunately, bad luck strikes and the FTL Drive malfunctions, destroying the creation that Fargo and Zane worked so hard to put together. They are back at square one and it looks like Andy will be stranded on Titan. Carter queries Henry about Andy only to learn that he is one-of-a-kind; as unique as everyone else in Eureka. We can see that Carter realizes that Andy is much more than the sum of his parts. 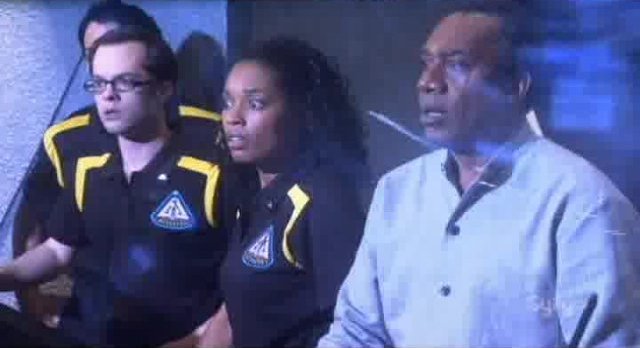 At the same time, Grace discovers several melted wires and systems. We discover that the FTL breakdown is a result of whatever is causing the melting of other objects in Eureka. With an approaching methane storm and things looking pretty bleak for Andy, he asks Carter to do a favour for him. The scene shifts back to Carter’s house, where he explains to S.A.R.A.H that Andy is stranded. Carter adds, “I guess he really cares about you. I just didn’t appreciate how much.” As Carter is showing his sympathetic side, something else goes wrong. Bats have invaded his house. They burst out of the fireplace and fly around Carter. It seems that real men scream like little girls. 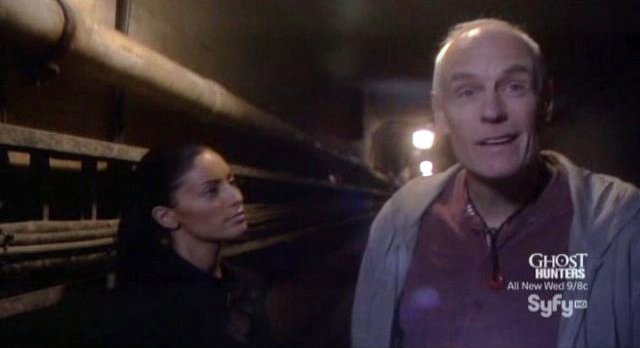 Taggart arrives at G.D. by way of the service passages in the walls. He tells Carter, Allison and Jo that the bats have been sighted throughout G.D and beyond. They’ve been leaving clues as to their whereabouts through their droppings. That’s not all, as the four of them discuss the situation, Jo has an ‘A-ha’ moment, “Things are melting where ever the bats fly”. Carter dashes back to his house, concerned for S.A.R.A.H. It turns out that the house has been doing some melting of it’s own. S.A.R.A.H’s last words to Carter before she goes off line, “Sheriff, please tell Deputy Andy that I love him.” 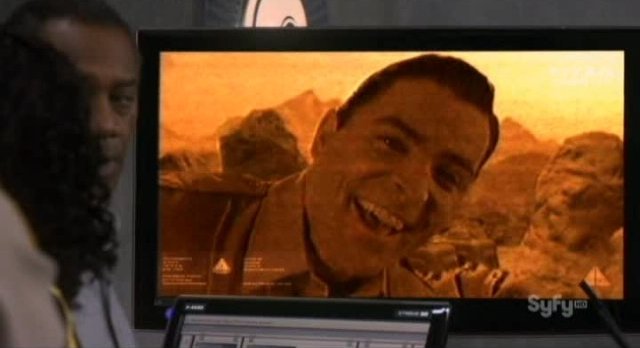 Back at G.D Allison and Taggart are working together to come up with an answer for all the melting. They discover that bat droppings and a common element in the melted objects, Zylene, have combined to create a super acidic material. Holly appears with news. She knows where to find the bats. She uses a smiley face to indicate on a pad where they are. You have got to love Holly. She finds the good in everything and always seems to have a happy face, herself. Meanwhile, Zane is still giving Jo a hard time for backing out of the mission. 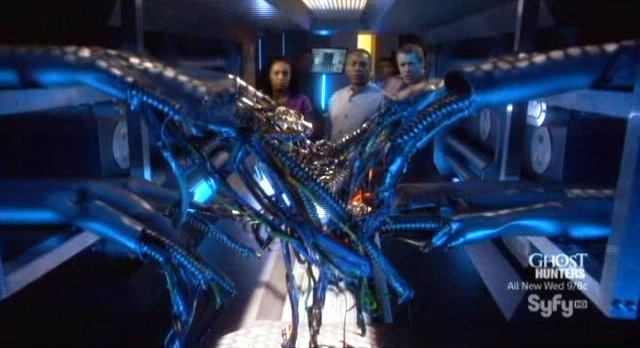 Taggart and Carter have volunteered to enter a huge tank of poisonous gases to find the bats. Taggart warns that they have to move quickly since their protective gear will begin to dissolve quickly in that environment. Taggart identifies the necessary bat, Carter captures it, and it looks like the problem may be solved and not dissolved…sorry, I couldn’t resist.

As Zane continues to fret over Jo, Fargo summarizes the situation really well. He says, “Pushing her away isn’t making the situation easier on either of you.” This causes Zane to think. We segue to Jo talking to Andy as his systems slowly corrode. He has a good quote in this scene, “You wake up in the morning and you never know where the day is going to take you.” Carter enters just in time for the camera on Titan to fail. They’ve lost the signal. 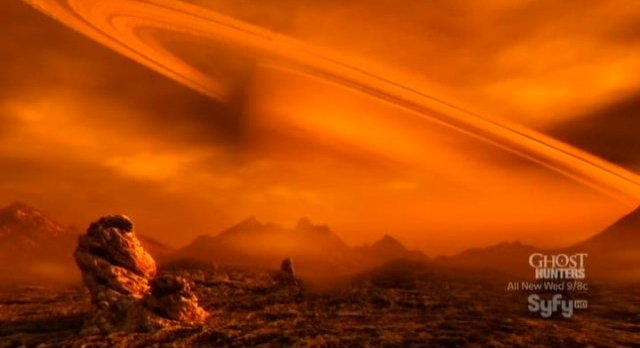 Carter has connected. He feels sorry for Andy. Despite Allison’s sympathetic encouragement, poor Carter looks like he’s lost his best friend. Isn’t it nice when someone learns something useful? Henry rushes in with a bright idea. He’s figured out that a slingshot effect can get Andy back, but he has to be in the exact same location in which he arrived. This is obviously a problem with the feed from Titan on the fritz. Carter also has his eureka moment of the episode. They can’t tell Andy where he needs to be, but maybe they can show him. Carter appears on Titan as a hologram to direct Andy to the correct spot. 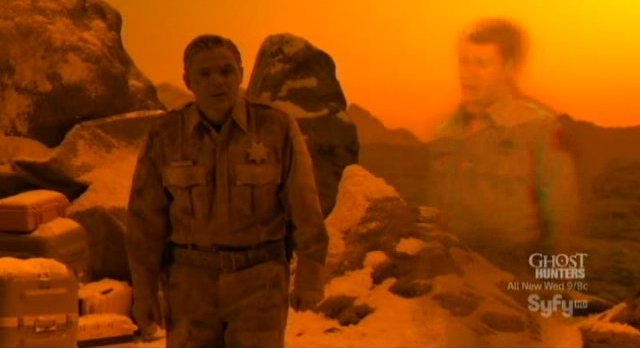 With Andy back on Earth defrosting, the scene moves back to Cafe Diem and Zane and Jo. Zane admits that when he had worked to be on the mission, he assumed that he would be on the mission with Jo. She apologizes for letting him down. Zane asks what their relationship is…friends, lovers, or nothing. Jo has no real answer for him other than they are more than what they were before.

Back at Carter’s house Fargo does a diagnostic and informs Carter and Allison that S.A.R.A.H may have lost some memory. But when Andy comes in, she is pleased to see him. It appears that Carter will have a house guest for a while. Carter admits that it doesn’t feel nearly as crowded as it did. That is when he pops the question, sort of. He asks Allison to come and live with him. His last words to her, “just think about it.” 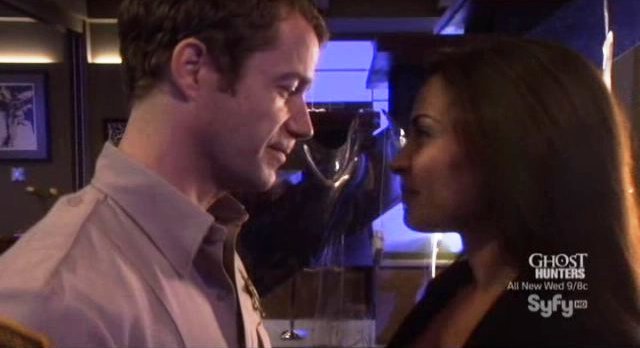 What I liked about this episode; the obvious first choice is the planet rise of Saturn at the end of the episode, as well as the semi-regular Andy bashing and destruction of yet another of Carter’s vehicles. He must be on a first name basis with the local car dealership personnel.  The only thing I found questionable about the episode was the Henry Deacon statement I explained above. So, from this reviewer, great job Eureka writers. I’m looking forward to the final season 4 episode. 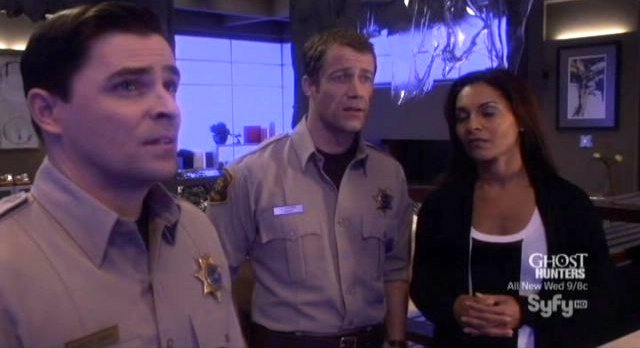 Eureka returns for the season finale Monday September 19, 2011 on Syfy with “One Giant Leap”. We include the sneak peek below courtesy of Syfy!

Thank you for reading and stopping by WormholeRiders News Agency

Mon Sep 19 , 2011
Welcome back Alphas fans! So as the season begins to draw to a close, Syfy’s Alphas is pulling some old tricks out of its still-new hat.  One of those said tricks is the ever-popular back-to-school theme.  Monday’s lesson began with the first sentence of the entire episode.  “Possible Red Flag […] 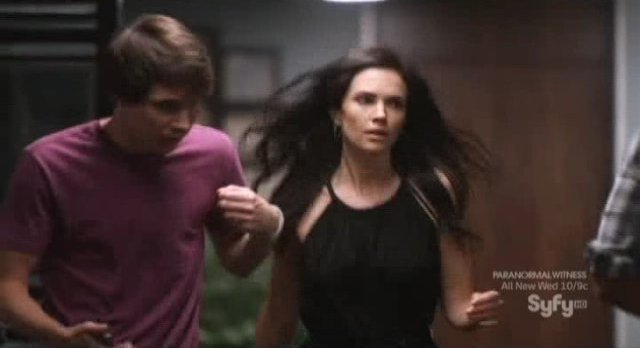