I had to take my sister to the airport at 4am. I raced back home and prepared for VulcanCon by Vulcan Events. The whole family wanted to help break into the Guinness Book of World Records for number of fans dressed as actual Star Trek characters. I decided on Jadzia Dax from Deep Space Nine. 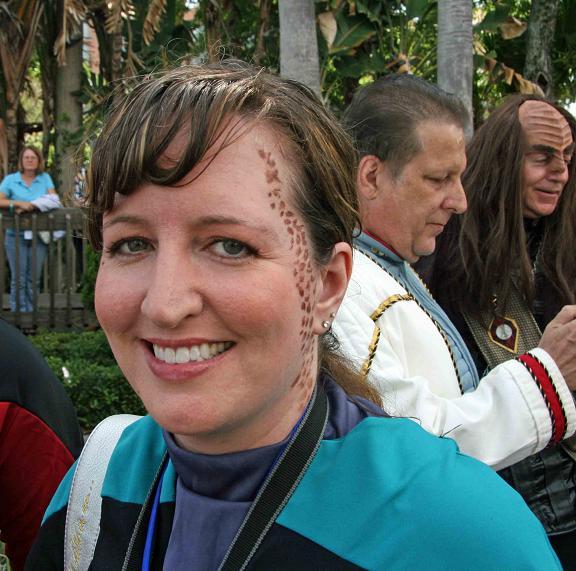 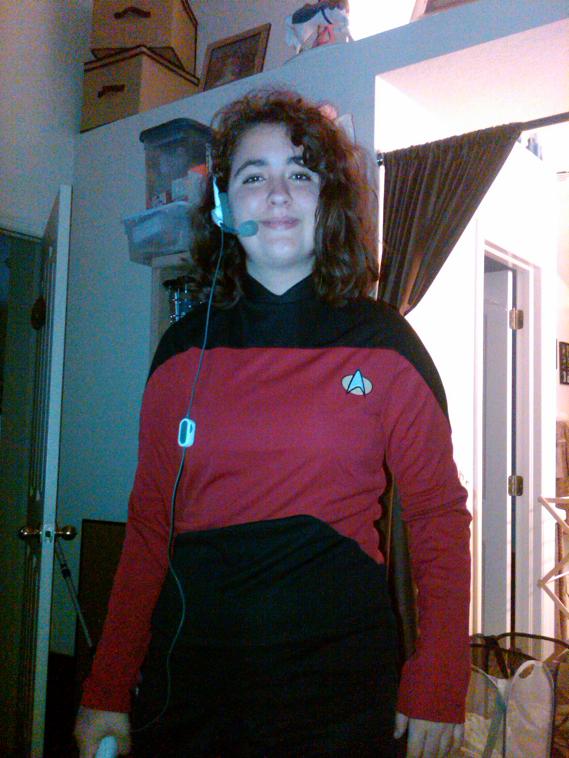 Once inside the hotel , we noticed an impressive number of fans dressed as Star Trek characters in the lobby. Based on the large crowd, It looked quite possible we’d break the world record. I asked where we were supposed to meet and was told to hang out in the lobby. We waited… And waited… Um… and waited. I became engrossed in a conversation with my family and when I looked up it seemed someone had beamed up all the fans in costume. We walked outside of the hotel and realized everyone was meeting outside in the parking lot.

After signing a sheet that will be sent to the Guinness Book of World Records to confirm eligibility, we waited some more.  And it was hot – the temperature had reached 92 degrees. If I was hot dressed as Jadzia Dax, just imagine how hot the guy in the almost full rubber alien suit felt! And then there were the Klingons. The poor Klingons not only wore a lot of hot clothing, but many of them had heavy weapons to carry around – one even had a large axe that shot fire 10 feet into the air. The sacrifices we geeks make for the cause of our fandom. 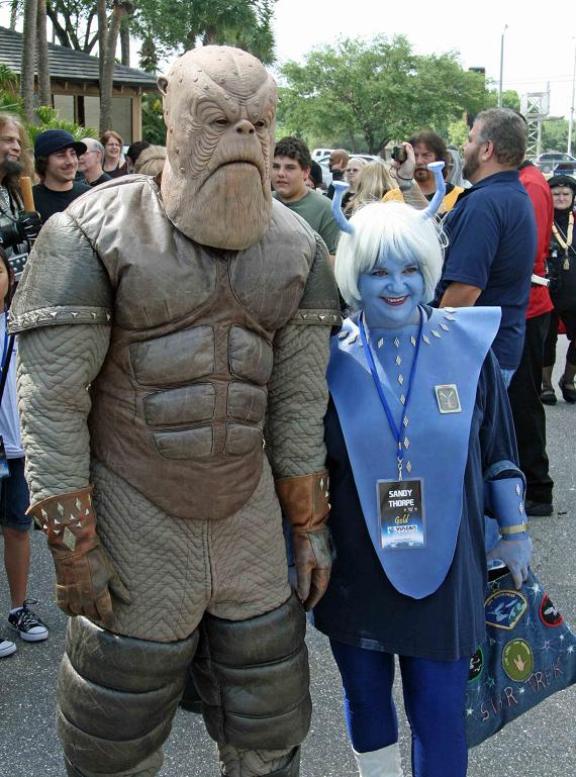 The entire group was asked to move to a section of the parking lot that was somewhat in the shade. The shorter people were sent to the front of the group facing a bridge. On the bridge were all those wanting to photograph the event. Everyone was having a good time even though it was ridiculously hot. And then an announcement that made the crowd cheer: We had enough people to set a new record for the Guinness Book of World Records! W00T! 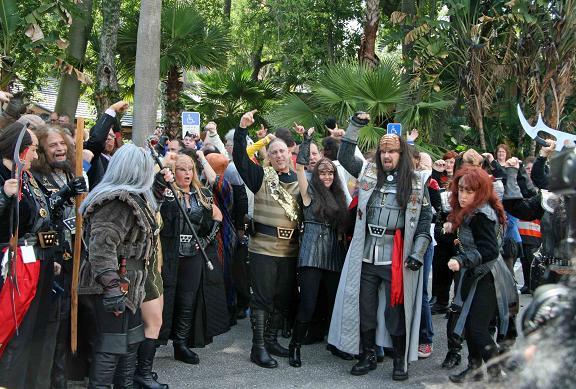 But before we could head for the a/c, a rock band known as Sci-Fried wanted to film a music video to put on their website. How could we pass that up? Hot? Nah! Of course we want be in the video! I think it took maybe four takes and the band had the video they needed. 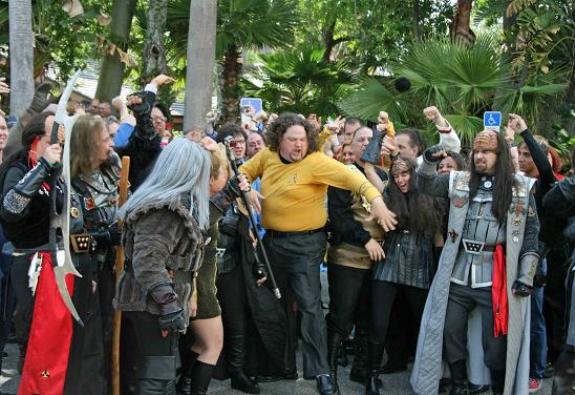 After the Guinness record attempt I changed out of my costume. Erin went to a kid activity. She made playdough alien animals. For someone like Erin who’s into arts and crafts, and a kid (or kid at heart), it was a great break from the convention. 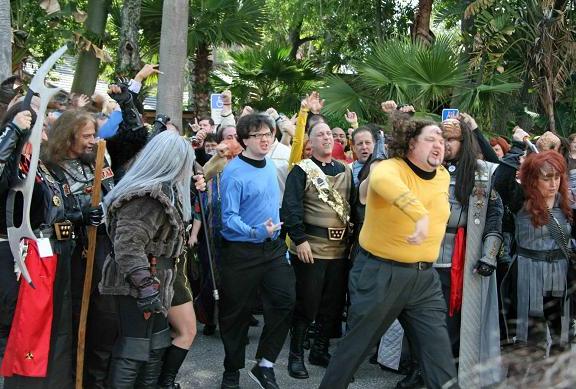 The Christopher Lloyd panel was next. I wasn’t exactly sure what to expect from Mr. Lloyd. Would he seem like Doc Brown? Would I see a bit of Reverend Jim in him? Would he be funny? The answer to all these questions is a resounding YES! Mr. Lloyd is a funny, intelligent, sweet and  gracious man. Fans asked him questions ranging from how he prepared for his roll in “One Flew Over the Cuckoo’s Nest” to what it was like playing Uncle Fester in “The Addam’s Family”.

One of my favorite moments was when a fan asked Mr. Lloyd to say “1.21 Gigawatts!” Suddenly Mr. Lloyd was gone and in his place was Doc Brown. He yelled out “1.21 Gigawatts!” I expected Michael J. Fox to come skate boarding up to the stage. When asked who he’d imagine playing him in a biographical movie, Mr. Lloyd didn’t hesitate to say, “Danny Devito!” I was surprised to learn that his next project will be “Death of a Salesman” at the Weston Playhouse Theatre in Vermont this summer. Believe me when I say the panel for this Emmy-winning actor was far too short. I wouldn’t have minded another hour.

I had a break after Christopher Lloyd’s panel so I went up to my room to get ready for the cocktail party. The banquet dinner was scheduled immediately after the cocktail party. I made my way down to the ballroom where both events were being held. I was the first person there but it wasn’t long before other fans showed up. We talked excitedly with each other about the guests we were going to meet. It wasn’t long before the doors to the ballroom were open and we were let inside. This was my first cocktail party so I wasn’t quite sure what to expect. Inside it was dimly lit and there was an open bar. I noticed Michael Shanks was talking to a couple of people and, being a true Gater and fangirl, I made my way over to him. 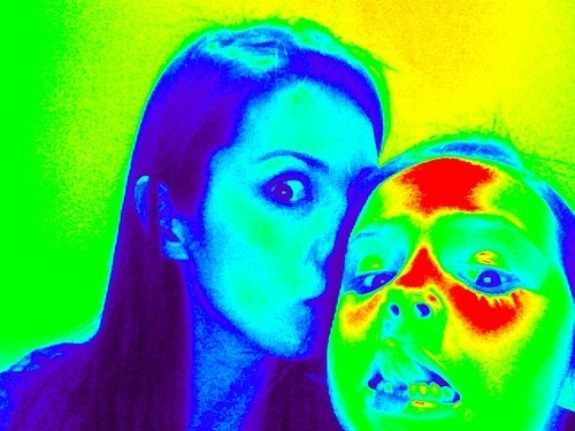 I broke the ice by thanking Mr. Shanks for the work he and his wife, Lexa Doig, do to help raise awareness for Multiple Sclerosis. My mother suffers from the disease. Click the image below to visit MSAA Dot Org. Thank you.

Mr. Shanks informed me that his wife’s father also has MS so it is a cause of great personal interest to him. I, along with a few other fans, talked with Mr. Shanks about everything from Multiple Sclerosis, to raising children in an internet world, and to filming an episode of Stargate Universe. 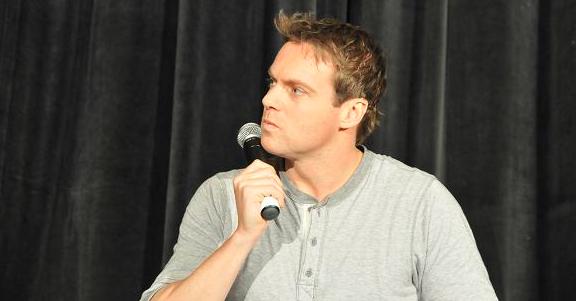 Mr. Shanks was asked what it was like working with Robert Carlyle. He said Mr. Carlyle is a true professional and wonderful to work with. He caught himself watching the scenes instead of acting in them a couple times, it was that much fun watching Mr. Carlyle at work. When asked if Mr. Shanks has been watching SGU he said, “Not really.” He did say “SGU” is the type of show he has always wanted to work on because it allows the actor to delve into the character and bring them to life, flaws and all. He explained he thoroughly enjoyed working on Stargate SG-1. However, the personal side of the characters was usually diminished in favor of the main storyline. I asked Mr. Shanks if it was weird being back on a Stargate set that was very different from the one he worked on for so long. He said the crew was the same so it was a bit like coming home.

I can’t remember who brought up Twitter *innocent look* but Mr. Shanks said that while his wife (@lexashmexa on Twitter) likes being on there it’s not really something he gets. He said he knows his wife has a Twitter following that “does her bidding.”  I smiled and said, “I am one of her minions.” He made a face at me and faked being irritated. Mr. Shanks doesn’t take himself too seriously. I think this is just one reason why he’s such a popular actor with the fans. 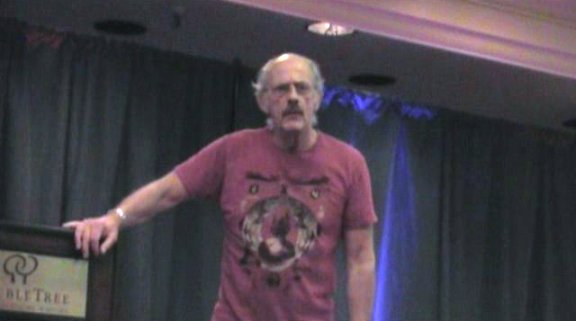 The cocktail party was over way too quickly. Fortunately the banquet dinner was next. I left the ballroom and walked over to where the banquet would be held. We were asked to sit and wait for our names to be called. Each person or group was asked which guest they would like to sit with for dinner. I was hoping to sit with Christopher Lloyd. I’ve been a fan of his since, well, a long time. I remember he won my heart in “Back to the Future” and broke it in “Who Framed Roger Rabbit.” He won it back again in “The Addams Family.” Luck was on my side! When my name was called there was still room at Mr. Lloyds table. 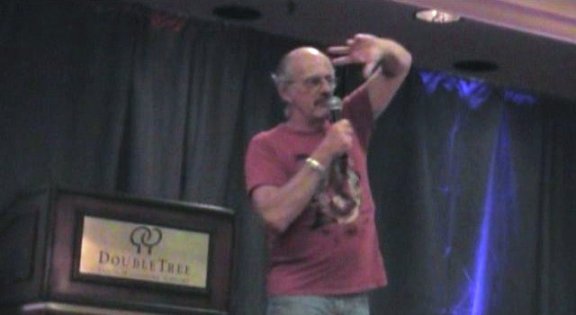 My husband and I walked into the banquet room and found Mr. Lloyd’s table. I’ll admit to being nervous at first. However the other fans at the table were extremely nice and Mr. Lloyd was very easy to talk to. Soon I was at ease. We talked about the movies we love him in like “Back to the Future” and “The Addams Family” and what it was like to work with Andy Kauffman on “Taxi.”

Dinner was buffet style. We had Mr. Lloyd go first. Ever the gentleman, he passed out the plates to all of us and then stepped aside insisting we go first. It was a surreal moment for me. Does it get any cooler than having dinner with Doc Brown? I don’t think so. Back at the table the conversation continued. Then dessert. I’m not going to lie — the chocolate cake was amazing. And even though Mr. Lloyd was suffering through some serious jetlag, he stayed a long while chatting with us.

All good things must come to an end. My evening with Mr. Lloyd was no exception. I think there was a collective “ Awwww” from the table when it was over. Thankfully, VulcanCon still had one day left.

Mon May 3 , 2010
Welcome Stargate Universe fans! If you have not seen this episode called “Lost” and wish to be spoiler-free, please be warned: The following review has complete spoilers. I want to thank WR_Systems for taking over my review duties for SGU the last two Fridays while I was visiting Lou Diamond […] 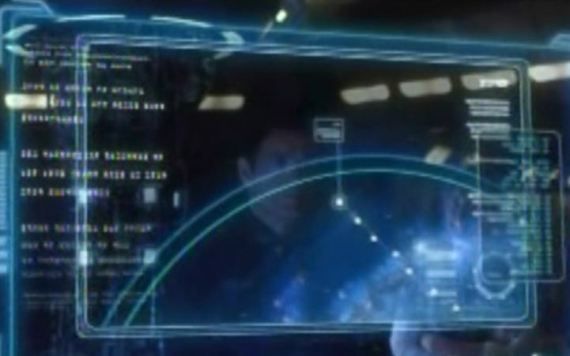