‘The Berlin Proposal’, written by Rebecca Dameron and Dave Kalstein, Directed by Alex Graves, is an exciting episode is about the efficacy of psychological programming depicted in Treadstone!

This series is a bit overwhelming in a good way, burdened with many disparate sub-stories that will take a little time and some patience to see how they will all come together. Certain aspects begin to jell nicely in the third episode of Season 1 of USA Network’s new science fiction suspense action series, Treadstone.

It becomes clear that the current generation of Cicada sleepers, of what was originally the Treadstone project established in 1973, is suffering from distinct degrees of devolution. At least, that seems to be the outcome of some. One Cicada operative is now in custody after killing five innocents in a convenience store.

It seems both messy and random. On the other hand, out-of-work Cicada sleeper Doug McKenna (played by Brian J. Smith of Stargate Universe) seems to have stalled out. He heads home to his wife after being laid off from his oil rig gig.

Triggered by a picture put in his path, he is compelled to find a face at an address in his hometown, thus leading the viewer to believe he is headed to make his own kill. But his programming, somehow, does not seem complete. He goes to the location, makes a brief effort to find out who is this person he thinks he should find. When it doesn’t work out, he simply shrugs it off and heads on home, content to return his attention to his wife.

Meanwhile in North Korea, housewife SoYun Pak (played by Hyo-Joo Han) has been activated once she hears the French tune Frere Jaques from a Game Boy her son brought home. She immediately proceeds to complete her mission with the skill of Bruce Lee. Her mission is complete when she kills her target, General Kwon (played by Tzi Ma).

But while we contemplate the actions of each Cicada assassin, whether all five of those convenient store patrons were, in fact, innocent victims of the now-detained Cicada assassin, and whether or not SoYun’s mission was really a complete success since she lost possession of the lethal-injection syringe and had to kill General Kwon by strangulation, we are also asked to contemplate a deeper truth.

We wonder whether the Cicada is, in fact, merely sleeping while awaiting its moment of programmed poignancy and significance. Or if, during dormancy, there is more going on within the heart and the soul of the synthesized human weapon.

Conversely, we wonder about Petra (played by Gabrielle Scharnitzky, from the 2015 Cold War miniseries The Game). She endured a dormancy of another type. Hers was a conscious quiescence, keeping unsung vigil next to a relic Soviet nuclear warhead. The warhead is, incidentally, also whiling away the decades, awaiting its moment to “become” what it was designed to do. We experience, along with Petra, how the socio-economic and governmental needs of an operative like Petra, and a warhead like Stiletto Six, have changed over the years.

We experience this as she makes her “moment of truth” call to home base, only to discover that the home base phone number now connects her to the lingerie department of a retail store off of Red Square, GUM, “the most iconic department store in Moscow,” according to Business Insider.

In “The Berlin Proposal”, Petra lives up to her name: As in the Cicada Protocol when she discovered the Stiletto Six ICBM, she is solid as a rock for the cause to which she pledged allegiance nearly fifty years ago. Undaunted by the phone fail, she continues to activate herself, so to speak, making her way to the Kremlin, to her own apartment from the early days, and to what remains of her old contacts who have by now sold out to the current circumstances for self-aggrandizement.

Like any other trained human weapon would, she makes quick work eliminating her old handler and the assassin he sent to kill her. Clearly, her dormancy has not affected her strength, agility, and prowess in hand-to-hand combat, even though by now she should be somewhere in her mid 60’s.

Whatever conclusions we eventually reach about what might have happened during the dormancies of each of the Cicada assassins that could have affected their “quality” as operatives, or what else the upcoming episodes will develop about the individual characters, we still wait for the clues that will lead us to understand what motivated the current Cicada program.

We do not yet know when, where, and how recently the current batch of operatives were put through the program that would turn them from their original selves into the trigger-functioned assassins they have become.

We do not yet know how John Randolph Bentley (played by Jeremy Irvine, who I absolutely loved in Spielberg’s War Horse), precisely figures in the story arc.

Bentley, who appears to be the first Treadstone operative to whom we are introduced through flashbacks to 1973, must somehow have a hard connection to the present day activations.

We only know that a present-day Bentley would have to be in his mid-60’s, at least, and that the present-day Cicada sleepers were programmed within the last 15 years, at most.

We know that at least Doug and SoYun can be activated by the tune Frere Jacques., although Doug appears to be leading a normal life since returning home.

We know that they are unaware that many of the people they regard as colleagues, superiors, even one who is a wife, might really be plants and handlers while the Cicadas “sleep.” And we are left to speculate on many other plot points that are (so far) hard to make out.

We also learn that there are operatives in other places, all over the world, who seem to be available, on call, and on target with regular missions. One was sent to take out the (presumably) defective Doug McKenna, who had shrugged off his mission and went home with his wife Samantha McKenna (played by Tess Haubrich). It seems Samantha had different ideas about whether Doug should be eliminated.

Apparently, she is okay that her product isn’t perfect. I look forward to seeing how her husband is developed as a human. Because – isn’t this the point? – humans were never meant to be merely “useful”.

In a world defined by consumerism, the disclaimer “results may vary” is on the label of many products.

In this third installment of Treadstone, writer/producer Dave Kalstein  and Tyler Hisel challenge us with the prospect that the current Cicada program may have produced sleepers with inconsistent results.

The sleeper operatives are awakening to all sorts of outcomes, and who is behind the waking of the Cicada Treadstone sleepers. Is it Bentley getting his revenge for what was done to him in 1973?

The question remains, however, whether they are, in fact, defective, or if there is something more going on we have yet to discover?

We have a lot of revelations yet to be disclosed in this series by the creator Tim Fring. I for one am looking forward to how these vignettes will come together to make the whole Treadstone story arc become manifest!

Team WHR suggest you tune in to the USA Network every Tuesday at 10:00 pm Eastern time for the next exciting episode of Treadstone!

One thought on “Treadstone The Berlin Proposal Means Results May Vary!”

Treadstone "The Kentucky Contract" - Even Assassins Have Family Matters!

Tue Nov 12 , 2019
Hello Treadstone lovers! ‘The Kentucky Contract’, written by Tim Walsh and Dave Kalstein, and directed by Brad Anderson, delves deeper into the circumstances of three of the Cicada assassins in USA Network‘s Treadstone. This fourth episode of the Jason Bourne saga/black ops thriller begins unpacking the baggage suffered by three of […] 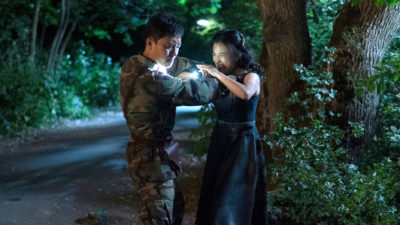