‘The Kentucky Contract’, written by Tim Walsh and Dave Kalstein, and directed by Brad Anderson, delves deeper into the circumstances of three of the Cicada assassins in USA Network‘s Treadstone.

This fourth episode of the Jason Bourne saga/black ops thriller begins unpacking the baggage suffered by three of the assets produced by the Cicada program. This week we focus on just three of the subplots, each belonging to a Cicada.

We are given the opportunity to become a little more familiar with these three assassins:

Soyun in North Korea (played by Hyo-Joo Han), who failed a SIM card swap in the last episode, putting her mother and son at risk of a concentration camp.

Doug McKenna (played by Brian J Smith of Stargate Universe ) in ‘The Kentucky Contract’ was scheduled for elimination last episode when an operative came to the house to exterminate him. Doug was saved when his wife Samantha (played by Tess Haubrich of Alien: Covenant) shot the operative dead.

Now he has violently escaped his capture when hypnosis uncovered in him the memory of his daughter and an urgency to find her.

There is an enjoyable common thread between these three subplots/Cicada assets. Each of the three threads have deep ties that each character has to their family.

Do You Love Me? Dead Straight!

The cold open to this episode puts us with Doug and Samantha, reeling from the fact that there is a dead guy lying on the living room floor.

Doug is wondering what the hell just happened. Further, Doug wonders what he did to become a kill target to this dead man, put down by his wife who turns out to be a dead shot.

Samantha is wondering what the hell she should say to explain all this to her husband?

The plot thickens a bit: Samantha has intimate knowledge of Doug’s conditioning that turned him into a Cicada asset. In this episode, she confesses that she had a hand in it.

She also confesses that she loves him, and with tears in her eyes, we are persuaded to believe her.

To cover up the crime, Doug and Samantha agree to bury the operative sent to kill Doug.

Soyun, also awakened to the knowledge that she is conditioned to do the bidding of the Treadstone puppet masters, longs to resist the missions and simply remain a contented wife and a mother to a young son, yet she cannot say no to the Cicada call. Although the first mission to kill General Kwan (played by Tzi Ma) was a successful hit, a second operation she is told to perform does not go so well. One might consider it a less intense job, since it did not involve hands of steal. Instead, it involved slight of hand, and a task meant to simply expose Colonel Shin (played by Lee Jong Hyuk) as a traitor.

Sadly it goes badly, and the SIM card swap did not happen. The consequence is losing both her mother and son to a concentration camp. Therefore, she falls back on her now-proven assassin skill set, because losing family is not acceptable. So she proceeds to take down (in Bruce Lee fashion) the soldiers sent to apprehend her mother and son. And once she is reunited with her family, she gives us a touching scene where she confesses, “My dear husband, I am not the kind of woman you think I am.” Clearly, she is conflicted about her new realized profession, and how it impacts her family.

Where O Where is Lila Jane?

Finally, we have Stephen Haynes. He is shackled and in protective custody, and we watch as CIA agent Matt Edwards (played by Omar Metwally) interrogates him while he is under hypnosis.

While we learn nothing about who might have been Stephen’s handler, we instead discover that Stephen has a daughter, Lila Jane.

We also witness Stephen break from his shackles, kill the hypnotherapist, and create a path of destruction as he leaves the fortified facility on his way to find his daughter.

We are left wondering if interrogating a Cicada without using sedation, and not performed behind the bars of locked cage, is a good idea. Steel shackles, we observe, are not enough to restrain Cicada Haynes!

Tying Together the Threads:

What arches over these three subplots is the crew that is trying to put it all together. Matt Edwards, the failed interrogator, is part of that team. So is Ellen Becker (played by Michelle Forbes).

They know of General Kwon’s murder. They know that he is connected to the Cicada program. They now know that Stephen Haynes is a Cicada with a daughter and they track him on his path to find her. They know that they have more dots to connect, but for now they are still unaware of a many of the dots.

And I have to wonder, is John Randolph Bentley (Jeremy Irvine), who was there at the beginning of Treadstone in 1973, somehow lurking behind the curtain of all these events? I can’t help but wonder.

His Berlin nemesis Petra (Gabrielle Scharnitzky) is still involved after these 45 years. I have to think that Bentley is as well. Petra obviously chose career over family (she shot her hubby back in episode one). Possibly Bentley is likewise committed to the course of his career.

Maybe not all Treadstone operatives have personal entanglements. I suspect we will find out shortly.

Meanwhile, North Korea is longing to adopt, and that adoption involves the ICBM Stiletto Six. That would make for an explosive family dynamic, for sure! Certainly, no story line is complete without a little family dysfunction.

This episode leaves us with Doug McKenna resuming with the Kentucky Contract mission, with the support and well-wishes of his wife.

We are left with Doug hoping that his warrior instincts will kick in when needed, and with Samantha hoping that Doug returns to her unscathed. Let’s hope this family duo survives!

Team WHR suggests you tune in to USA Network every Tuesday at 10 PM EST/PST for the next episode of Treadstone!

Thank you for visiting WormholeRiders News Agency. And thanks to Kenn for embedding the videos and the additional images for my report. I will be back in the near future for the Treadstone season one ongoing adventures of the awakening Cicada sleepers!

One thought on “Treadstone “The Kentucky Contract” – Even Assassins Have Family Matters!” 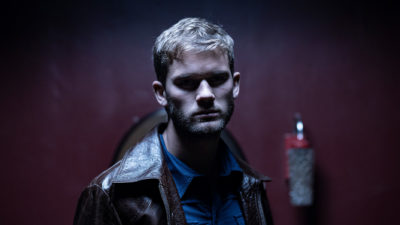