Luke’s (Daniel Doheny) story is beginning to take shape as we learn more about him in Day of the Dead. He has a reason for being such a nasty person, besides having a nasty mother, that is. His mother, Paula (Miranda Frigon), also has a choice to make as her decision to win the mayorship at any cost comes with consequences.

Will either of them learn anything or will they double down on their behavior? Then there are the people who it looks like we are about to lose as they join the zombie crew. Lauren (Natalie Malaika) is definitely having a rough time as she slowly loses her hand as it goes zombie.

Herb (Garry Chalk), who is being the big dick of the show, may yet surprise us with a zombie trait. Fortunately, being unconscious shuts him up nicely.

As Pops (Jay Brazeau) turns into a good guy and Jai (Dejan Loyola) and Amy (Kristy Dawn Dinsmore) settle their differences, and the good news is Amy and Jai finally get married! Bobby Hart (Matty Finochio) steps up to save Amy and Jai by being a good soldier. But then, Bobby isn’t the in-change thoughtful type that should be making the decisions.

In a way, even through all the arguing and sneaking around, each member has found a way to become a cohesive group to help the survivors of the town! 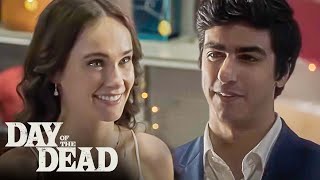 Their Evil Was Our Evil:

We begin this episode centered on Luke who has just lost his father. Flash forward to the funeral at the side of a dumpster. Paula tries last words, but her words are lacking and Lauren who has the experience of a few funerals takes over.

She manages to explain that they should live to honor those who died. As Paula readies a flare to burn Trey, and whatever else might be in there, Luke objects. Of course, he does. He has never, since the series began, agreed with his mother in any way. Paula lights the fire anyway.

As everyone leaves, Paula approaches him. She is obviously expecting to hug her son and, hopefully, make up. Luke has no intention of giving her that solace. Instead, he responds, “Don’t talk to me.”

Paula leaves Luke to his misery. As she does, Bobby Hart enters with a bag of moving parts and tosses it on top of the burning body. His comment, “my condolences on your loss.” Luke is obviously, and rightfully completely in shock by everything that has happened.

They are both being the men they hope to be over a bottle of beer each. Cam makes the mistake of trying to empathize by sharing his own misfortunes with his father. This doesn’t go over well with Luke. Luke berates Cam by saying that Cam always makes it about him. Naturally, Luke’s anger chases Cam away. Pops approaches a very guilty feeling Paula telling her that she was right about the zombies. He won’t give her any more trouble when their problems are over. If he had paid more attention Trey might not be dead. He doesn’t know Paula’s secret, that she let the zombie lady escape on purpose to get rid of Pops. Like Luke, she gets angry and yells at Pops. As he wanders away, completely confused, she finds a quiet place to weep uncontrollably.

Lauren has also found a quiet place. She is finding her errant hand very frustrating and is in tears. She remembers getting bitten. She considers taking the pill that she had stashed in her clothing last episode. She considers, then notices blood on the floor.

She follows it right to Herb and his stomach wound. Her first reaction is to go get Jai, but Herb doesn’t want that. He’s still nursing a grudge against the younger doctor and her daughter’s fiance. Lauren sutures Herb’s wound and gives him the pill. His first response is that he thought she would consume it. Lauren’s snide remark, “why are you such an asshole?” As Herb passes out, thanks to the pill, Lauren’s hand begins causing her trouble again. This time, it grabs a scalpel and attempts to slice Herb’s neck. Lauren uses her other hand to hold it back from killing him.

Jai decides to forgive Amy and probably himself after having a discussion with her about the problems that plague them both.

Jai has turned from a wimp to a leader over their catastrophe.

He tells Amy that she needs to make decisions for herself and, “make up her own mind”. They decide to get married, but since they have lost the rings, Jai will need to find a new one. There are about to become married people with rings Jai could borrow, but he decides to go in another direction. In the end, Amy and Jai will seek out Mayor Paula to officiates at their wedding using the power invested in her as the Mayor of Mawinhaken.

Cam comes across Lauren as she yells at her hand to behave. She grabs for the coke (product placement?) in his hand and pours it on hers.

My guess is to discover if her affected hand can feel anything or if it has entirely zombified. Otherwise, my guess was that her hand was thirsty and wanted a coke.

Cam isn’t thrilled about losing his drink and wondering why she is yelling at her hand but changes the subject to his recent experience with Luke. He compliments her on her words for Trey. She says, “I didn’t think my first funeral would be at a dumpster.”

Luke, still all by himself after chasing off Cam, calls his buddy Trent (Trezzo Mahoro), whom we haven’t seen in several episodes.

There is no answer except a voice message. I hope we see Trent again?

Poor Luke is sounding more and more desperate to reach his friend.

It seems that Luke’s original acceptance of Cam inside the Paymart has devolved into the same animosity he showed the other young man at the beginning. If Cam wants to make friends, he will have to try harder to listen.

Zombie McDermott (Mike Dopud) is smarter than the average zombie. He proves it when we focus on him in the cage as he attempts to get out. He starts focusing on the door hinge. He pushes the bolt out and snaps off his pinky finger as a result. This doesn’t seem to bother him. That’s when Rhodes (Kevin O’Grady) shows up. Naturally, McDermott is snarling at Rhodes which elicits a nasty retort, “Looks like Dr. Frankenstein isn’t here to save your ass… guess it’s just you and me, Bub”. I do love Mike Dopud as the zombie. He is really bringing a lot to the character. I am also wondering where Logan (Lucia Walters) disappeared to. My guess is that her overlords are the DOD – the Department of Defense.

I love Rhodes’s reaction to McDermott getting loose. The big tough guy tries to reason with the zombie as he holds a gun, seemingly for the first time. Rhodes assumes it’s McDermott, but I think it’s the original zombie who has never seen a gun before. He fires it, not at Rhodes, but away from him as if he is trying it out for the first time. Rhodes runs away, screaming like a little kid. He comes across two security guards on their coffee break and orders them after McDermott. Meanwhile, the zombie grabs a piece of shared clothing from the immolated zombie and drags it with him. As he is attacked by security guards, he kills all of them leaving Rhodes to hide and whimper another day as the zombie shuffles past. I wonder why the zombie wants the remains of his old host?

Another question mark for the next episode is when Sarah Blackwood (Morgan Holmstrom) and her grandmother (Margo Kane) have moved to a fire outside, her next choices will affect the rest of the story. T

hey enjoy the warmth of the fire as they continue to discuss the situation about the zombies.

Grandma’s advice is to throw the mask in the fire and be done with it. Bowman can borrow her car and start a new life. We flash forward to the next morning when Blackwood is taking the car and driving away. So, did she burn the mask in the fire? Is she going to start a new life?  I will get to the significance of Blackwood meeting with her grandmother at he end of my review.

As the episode comes to an end, we see Jai and Amy get married by Mayor Paula. Jai has found a toy ring from a Gumball machine. Everyone is there applauding the happy couple. Cam gives Lauren a note.

McDermott has arrived at the drilling site and tosses the burned zombie body into the pit. It lands in water or a liquid of some sort and seems to begin boiling or dissolving. It’s hard to tell. Luke gives his mother an earful at the end of the wedding. He announces that he is gay. He tells her that Trey was the only one he wanted to tell and that Trey was cheating on her. She slaps him, which really doesn’t solve the issue. As he storms off. she tries to apologize. He wants none of it. That’s when the zombies show up outside en mass. Who is the next character to die and become undead?

The plot thickened in this episode when Blackwood, who has escaped the mad doctor’s laboratory, arrived at her grandmother’s house and passed out at the front door.

Later, she wakes up on the couch. Her grandmother offers her a meal and a chat. After a few pleasantries, Blackwood gets to the point. She shows the older woman a wooden mask that she found at the drill site. Fortunately for us, grandma knows all about the mask.

As Blackwood’s grandmother explains the history of the mask, we learn that when the whites first arrived, a man died, and then many people died, “got ripped apart”. They begged her people for help. Her people did so, by cutting the affected in half. They kept coming. Finally, they killed all of them except the first. His name was Cooper. He was the source. He wasn’t like the others. Whatever was in him could be passed on. The whites claimed he was chosen, marked, or cursed. They were afraid to destroy him. They place the mask over his face as a warning and sealed him into a cave (Where the drillers found him with McDermott’s help). Blackwood explains to her grandmother that McDermott turned the original zombie into a flaming corpse, so maybe the curse is over? Lucky for us, it’s not. In fact, the original zombie seems to have taken a new host in McDermott! 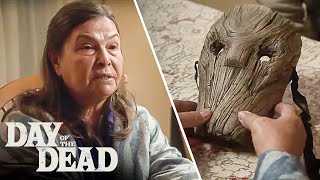 What’s next? Tune in at SYFY in the United States and CTV Scifi in Canada next week to see who lives, and who becomes the undead in Mawinhaken!

Thu Dec 9 , 2021
Welcome Back Undead Science Fiction Horror Fans, “To Anyone Who Can Hear My Voice” pivots towards the end of season one by returning to the beginning of the series. Very few people in Mawinhaken, Pennsylvania have been untouched by the Zombie Apocalypse. Our grade for the eighth episode of Day […] 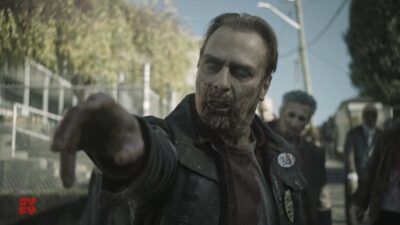