Our Team WHR grade for the fourth episode is a Straight “A” for exciting entertainment value.

“Day of the Dead” moves close to mid season with this episode confirming that few people, if any in Mawinhaken, Pennsylvania will be left unscathed by the Zombie Apocalypse.

What has befallen their town starts off in “Forest Of The Damned” with Jai (Dejan Loyola), Lauren (Natalie Malaika) and Cam (Keenan Tracey) who are mourning the death of Mrs. French (Paula Shaw). Viewers will recall Mrs. French sacrificed herself by vaporizing a bunch of the foul creatures when she opened, and subsequently ignited her oxygen cylinder inside a room filled with Zombies at “The Grey Mile” retirement facility.

The horror science fiction series continues to delight many SYFY viewers with it’s creative and campy take on the George A. Romero classic “Day of the Dead” film series. We are among those viewers who believe that Day of the Dead is superior in all respects to other programs in this genre, and as mentioned above, give it a Straight “A”.

What is surprising are the lackluster ratings for “Day of the Dead”. As a series DOTD has received to date approximately 277,000 live viewers for the premiere, 216,000 for the second episode, 184,000 for the third episode and falling even further to under 176,000 for the fourth episode. In fact “Day of the Dead” has fallen so far that few websites are even tallying the ratings numbers any longer.

While additional viewer counts have been received at USA Network, which also broadcasts “Day of the Dead”, lifting the series average to approximately 224,000 viewers per episode so far, a question remains in our minds;

Are other viewers apparently tired of Zombie Apocalypse type of movies and television shows?

We at Team WHR say yes, even though we sincerely enjoy “Day of the Dead”, and nevertheless hope that it is renewed for a second season.

Moreover, the low ratings for “Day of the Dead”, in our opinion, may be a demonstration that viewers want SYFY to return to it’s roots with new pure science fiction programs to emulate the success of series such as The Expanse, Stargate, Eureka, Sanctuary, and Warehouse 13 to name but a few.

We remain hopeful that the ratings will improve so that a second season can become reality, but are concerned that it may not be renewed due to low ratings. We shall see. 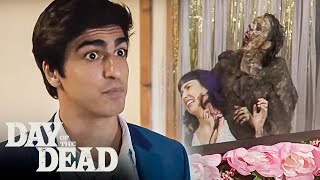 Forest Of The Damned:

The episode was directed by Steven Kostanski, and wonderfully written by Maisie Culver.

Ms. Culver also serves as the Executive Story Editor for the entire series.

“Forest Of The Damned” opens, as mentioned above, with Jai, Lauren and Cam leaving “The Grey Mile” fondly remembering Mrs. French a “bad ass” for sacrificing herself to save them from being Zombified.

Viewers will recall that Jai was in tears over the death of Mrs. French.

The trio seems heads to the country club where Jai is supposed to be married.

Jai continues to the country club as Lauren accepts some antibiotics from Jai to fight the Zombie infection and heads out.

Instead, Cam goes into the police station to report to Captain Pike (Marci T. House) and Mayor Paula Bowman (Miranda Frigon) about the Zombie Apocalypse that has become manifest in their fair town of Mawinhaken.

Both are only now realizing that it is true.

Captain Pike want to call in the State Troopers, but Paula convinces her to wait until they can find out more.

In the meantime, Can finds a bottle of booze in Captain Pike’s desk. He decides to take a few swigs after seeing a picture of his family in the desk

Back at the country club Jai is confronted by Amy (Kristy Dawn Dinsmore) and her father Herb (Garry Chalk) after Amy’s best friend Shawn (Victor Zink Jr.) asks why he is not in his tuxedo for the wedding service?

Jai tries to explain to Amy that he still loves her, but a Zombie Apocalypse is destroying their town. Amy gets sick to her stomach hearing this, and is seen, going with Shawn who lock themselves in the restroom.

Is Shawn really Amy’a best friend, or is he her lover?

Is Amy suffering from morning sickness from being pregnant, and if so, who is the father?

A quick segue to Luke (Daniel Doheny) and Trent (Trezzo Mahoro) who were planning a Kegger party out by the lake with their friends.

In what will become “The Forest Of The Damned”, Luke and Trent are in deep trouble!

The Kegger party is long forgotten when the two are attacked by Zombie Zero (Nikolai Witschl) and other Zombies after they had decimated and massacred all of their friends in the forest.

The two try to hide, but will they be able to escape the nightmare?

More on that factor at the end of “Forest Of The Dead”.

Next we are with Detective McDermott (Mike Dopud) who is escaping from what we were led to believe in the last episode was in a hospital.

We learn that McDermott has actually has been held at a corporate research facility run by Dr. Logan  (Lucia Walters).

Outside Sarah (Morgan Holmstrom) is still hunting down whoever is responsible for harming her ally McDermott.

Sarah follows a lackey of Dr. Logan’s inside.

This will come in handy later when the lackey finds and fights with McDermott.

McDermott stabs the lackey with a hypodermic in the heart with copious amounts of blood streaming out of the lackeys heart, but not before McDermott, who passes out, is injected with something.

McDermott regains consciousness, locates some street clothes in a locker, and changes into them leaving his gown and wrist bracelet from Doctor Logan as bread crumbs that Sarah will find shortly.

Sure eneough, Sarah finds McDermott’s wrist band with his name on it as well as his hospital gown and begins to look for him.

Meanwhile, Dr. Logan is observed studying the Zombie virus concluding that “this thing  is a cure for death”.

The questions become will Dr. Logan abandon her medical ethics to pursue the virus?,

Will she use the virus for good or for evil?

McDermott knocks out another guard grabs his gun, finding Dr. Logan asking her “I’ve got some questions, and I’m assuming you have the answers”.

In this scene it becomes apparent  McDermott is suspicious that Dr. Logan’s intentions are motivated by greedy corporate interests, and not for the benefit of humankind to fight the Zombie virus.

It also brings us to another question.

Just how long has Doctor Logan been working on the Zombie virus at the fracking facility?

Did she release it on purpose? It certainly seems that way!

Sarah eluded still other guards, shoots one, and is able to link up with McDermott, who found holding Dr. Logan at gunpoint.

Another guard shows up.

The sequence leaves us with a cliffhanger when it cuts away on the sound of a gunshot.

The question is whose gun, and who in the heck has survived?

The exciting episode winds down on three notes:

Back at the country club where the wedding is supposed to take place, Herb and Jai convince Shawn to come out of the restroom where he has been hiding with Amy.

Herb blurts out it might have been better if Amy had stayed with Shawn, revealing that they had been lovers, at least in the past. In a moment of pure disgust, Herb goes on to say:

Herb decides to head to the bar for a few stiff drinks. After that scene, we agree with Herb and decide to have several few belts of booze ourselves!


At the police station, Captain Pike finally calls in the State Troopers while Paula tries to call Luke subsequent to getting his voicemail.

Too late Mom, Luke is running for his life and may not survive!

In the final sequence in the forest, Trent runs away to save his own life, leaving Luke trapped by the Zombies on both sides of a bridge as the screen fades to black!

In closing for now, we at Team WHR look forward to tweeting with you next Friday during the terrific “Til The Dead Do Us Part” episode, and include a sneak peek below. Thanks again SYFY!

Tue Nov 9 , 2021
Welcome Back La Brea and Wormhole Time Travel Science Fiction Drama Lovers, Except for the fact that we had wanted to see Doctor Rebecca Aldridge (Ming-Zhu Hii) at the end of the episode end, the Team WHR grade for La Brea remains a Straight “A” for delightful drama and exciting […] 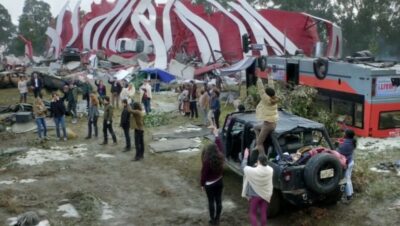