“The Prism”, written by Jonathan Walker and directed by Alexandra La Roche, is subsequent to when Dracula, portrayed by Tricia Helfer, had arrived on Earth from hell in Van Helsing to enslave all the inhabitants of Earth by sacrificing Sam (Christopher Heyerdahl) in the process.

The superb fourth season of Van Helsing, in the eighth episode, now begins the count down to bring all the characters back together to determine how, and if, humankind will over come the evil that is hell (pun intended) bent on enslaving our fair planet for all time!

In the previous episode, “Metamorphosis”, Vanessa successfully sent Dracula back to hell through a wormhole type device in order to protect her daughters and their mission to find the “Three Pages” (the name of the twelfth episode of season four) to destroy all the vampires on Earth!

With this development, we are left to wonder if we will ever see Vanessa (Kelly Overton) and Dracula ever again?

Now well over halfway through the fourth season in the United States, Dracula mythology lovers are looking forward to finding out the most important factor; will Van Helsing be renewed for a fifth season, or will the producers have to wrap the series at the end of season four on SYFY?

We certainly hope that a fifth season is in the works since Neil LaBute, the series creator, tweeted a few weeks ago about his hopes on a fifth season. 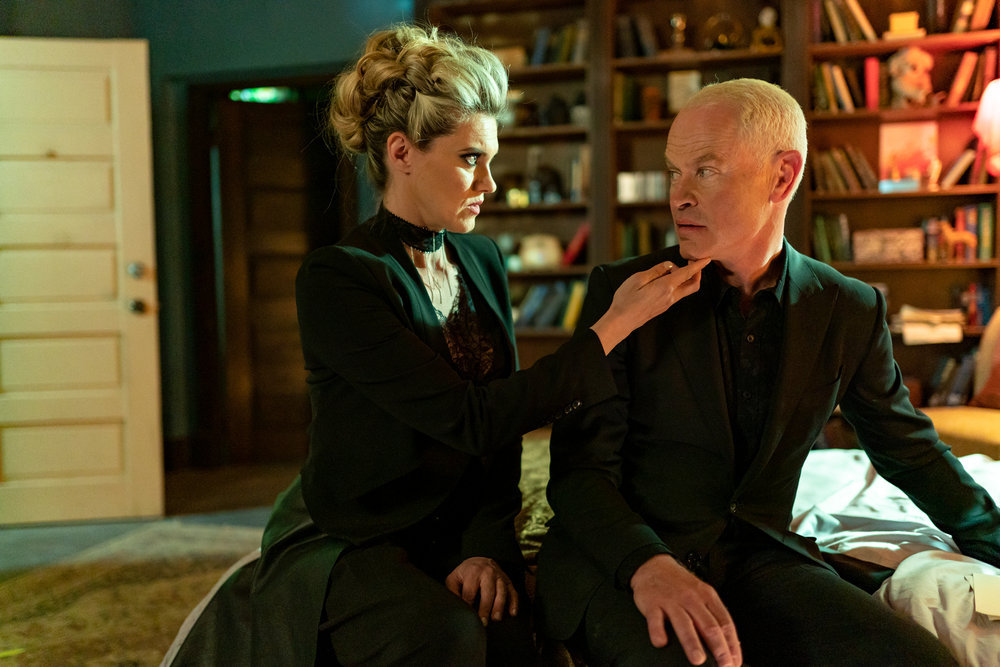 “The Prism” opens after The Oracle (Jesse Stanley) has captured Jack (Nicole Muñoz). Viewers will recall that Jack sacrificed herself to allow Violet (Keeya King) to escape with the amulet to seek the three missing pages that were torn out of the Van Helsing family book by a person yet to be revealed.

Jack finds herself chained to a wall back at the Hansen’s (Neal McDonough) headquarters. She does not look very happy being in the custody of The Oracle who shows up to use an enchanted evil Pentagram red hot branding iron to take control of Jack’s mind using her to try and locate, and ultimately capture Violet.

We witness that all the Brides of Dracula, led by The Oracle, locking onto to Jack to explore her mind in order to locate Violet. Their eyes turn silver when all are linked in this manner.

Hansen, adopted father of Jack and Violet is not pleased with these developments, but wisely does not share his concerns with Michaela (Heather Doerksen). We witness Hansen spying on the procedure of using Jack as a guinea pig to trap Violet, which almost happens, but I am getting ahead of myself.

Hansen locks into the visions being projected to Violet being extracted the The Oracle. This procedure allows the Brides of Dracula to not only determine where Violet is going on her search for the three pages, but to implant visions into the target subject to distract, confuse, and extract the information they desperately need, the three missing pages from the Van Helsing family book!

We segue to Violet. Although she told her boyfriend Lee they were going their separate ways in an earlier episode, Violet, running for her life without the wisdom of Vanessa, seeks out Lee for comfort and guidance.

We find the two lovers back in Fort Collins. Lee tells Violet about an underground movement that is getting people away from the vampires that many assume have apparently overrun the North American continent. We found out that this has not happened as revealed in “Miles and Miles” when Phil, Jennifer and young Owen escaped to a green zone not infested with vampires.

The underground railroad that Lee speaks of is a way to escape to other green zones. Violet expresses some interest, but is actually buying time to figure out how to find the “Three Pages”. Violet leaves Lee sharing sincerely that she must complete her mission. Violet spend the night in a safe location.

In the morning, Lee somehow finds Violet after she has visions. Is it actually real or is The Oracle inducing the hallucinations? We do not know at this juncture. Nevertheless, Lee and Violet are attacked by vampires. Violet fights of the vampires to save Lee. Seemingly saved, Violet and Lee share a tender kiss.

Back in the Fort Collins headquarters of The Oracle, Hansen visits Jack. Hansen implores Jack that he is on her side and has been trying to protect her and Violet. Jack does not believe her adopted father. Jack asks Hansen why is she being held prisoner? Hansen says to be patient. However at this point, Jack rejects what we will find out later that Hansen has true of a father has for his daughters.

Back to Lee and Violet where she confesses what she really is and that she must pursue her mission in life even though she loves him. Suddenly Violet is tracked by The Oracle locking into her as Violet’s eyes glow in a odd manner we have not seen previously with Vanessa’s red eyes.

Lee shakes Violet out of it, but we learn that it is a vision. Violet goes outside the safe house and begins to see hallucinate antique objects, some of which she has seen in Jacob’s library and others from her fathers office. Lee shakes Violet telling her to wake up and we find ourselves apparently back inside the safe house while they are being hunted down by Dracula’s minions.

The entire sequence is surreal and we do not at this point know what is real and what is hallucination projected by The Oracle whose purpose is to read Violet’s mind to locate the missing  “Three Pages” that spell doom for Dracula.

The effort does not work because Hansen has been using his own powers to mess up the vampire mind meld allowing Violet to escape. The Oracle continues to project visions to  Violet who observes  a painting from her father’s office floating in the middle of a forested area. Violet suddenly remembers a detail and breaks the mind meld with the help of her father,

Ivory and Scab, sent by The Oracle arrive and jump Violet. Violet severely injures Scab infuriating Ivory who retreats from Violet to allow Scab to heal. Violet tells Lee she cannot go with him and whacks Lee, knocking him out. Violet places Lee in the underground railroad’s van, telling them to keep Lee safe.

The Oracle is not happy and goes to confront Hansen, but he is nowhere to be found. Hansen is explaining what has really been happening. He free Jack who now believes that her father is telling the truth.

Violet goes to her father’s old office at Black-Tec. Here she finds the painting she saw in the vision knowing it contains the “Three Pages” from her visions. It is now that we finally believe that Hansen is the one who stole the “Three Pages” to keep them from Dracula!

The Oracle and her minions move quickly to confront Hansen.

In a revealing flashback to the past, we learn that Hansen was actually a young man named Willem Hansen, a student to Jacob Van Helsing. Jacob ensures Hansen she will share the secret with him on how to kill all the vampires in the future.

However, Jacob is a drug addict and sends Willem to an apothecary to get more of the morphine that Jacob needs for his survival. While picking up the drugs, Willem is jumped by the Oracle, who turns him into a  vampire! Willem returns back to Jacob’s and in turn turns Jacob into a vampire.

Willem Hansen rips out the blank pages from Jacob’s book and prepares to hide them from his masters giving viewers the historical back story on the “Three Pages”!

In the final sequence, Hansen lives up to his word delaying The Oracle long enough for Jack to escape after her being tortured. Hansen, attempting to placate The Oracle says that he has engineered a snare to capture Violet and Jack and recover the “Three Pages”.

We viewers suspect that Hansen is lying, actually setting up the adventures to come in future episodes in season four that will reunite all of our heroes in the fight against The Dark One!

In closing for now, if you have never seen Van Helsing, you can watch the entire series on SYFY or watch on Netflix.

In the meantime, we also suggest that you tune to SYFY at 10p/9c each week to watch the exciting season four concluding episodes. You will not be disappointed and will enjoy Van Helsing as much as we do!

Feel free to visit TeamWHR on Twitter, WHR on Facebook or visit me on Twitter by clicking the text links or images avatars in this news story. I and Team WHR look forward to Seeing You on The Other Side!

Sat Jan 4 , 2020
Hi WormholeRiders and Treadstone Lovers! Treadstone moved towards an exciting season one finale with the ninth episode named “The Seoul Aslylum” that sets the stage for the viewers who have been on the edge of their seats all season to learn more about the Cicada sleeper assassins programs by a […] 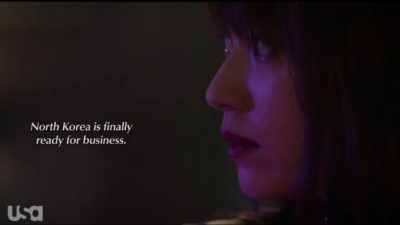