While at Comic-Con 2010 in San Diego, courtesy of MGM Studios it was my great pleasure to sit down with the fabulously talented Robert Carlyle to talk about his role as SGU’s Dr. Nicholas Rush, his thoughts about conventions, Twitter, and video games.

Spoiler Alert! Without giving away too many details, Mr. Carlyle did give some advance information about what is in store for us on SGU next season and I, for one, am very excited.  Secrets will be revealed, decisions made, and might there be aliens…?

All new episodes of Stargate Universe season two will air on SyFy beginning in September 28, 2010 according to the most recent information available to WHR. Thank you for visiting and I hope you enjoy the Robert Carlyle interview as much as I did conducting it.

9 thoughts on “Stargate Universe: An Interview with Robert Carlyle”

Mon Aug 2 , 2010
Hey there Comic Con fans! After preview night I had a feeling I had gotten myself into something massive. I had no idea how right I was. Yikes! Thursday I was up early but slow moving. Not a good start for the first full day of the convention. Not surprisingly, […] 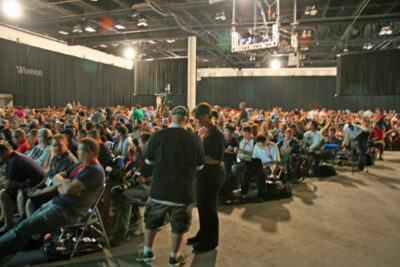 Shout Out To Andrea Stefancikova From The Debris Wormhole!