ZOMG! I just got a taste of what is to come. To say I am in awe today after Comic-Con is probably an understatement. I don’t even know where to begin. It began Wednesday evening July 21, 2010 and was just insane!

Maybe I should start at the beginning. At least the beginning-ish. I am from this geographic area, but no one cares where I was born, so I’ll just skip to the part where I fly back to San Diego.

I flew from Tampa to San Diego late Tuesday night. The plan was to be at the San Diego Convention Center for the early badge pick up on Wednesday. I’ve been to large conventions before and know that badge pick up can be a beast in and of itself.

WR_Systems (Kenn), the Editor in Chief of Wormholeriders News Agency, was kind enough to pick me up and take me to the convention center. You can visit Kenn on Twitter here.

While Kenn waited outside the convention center in the car I went to get my badge. The line was huge. I figured I would be there for an hour. Surprisingly I think I waited about twenty minutes.

Seriously, not a bad wait at all. Comic Con has it down when it comes to giving out badges. Plus I got a swag bag that I think I can fit inside.

Then It was my turn to wait by the car while Kenn picked up his badge. While I was waiting Pierre Bernard, Jr. of the Conan O’Brien show called me on my cell. You can visit Pierre’s art website at www.totallygraphic.com. Drop him a line on Facebook here. He had picked up his badge and wanted to know what I was doing. I invited him to dinner with the rest of the Wormhole Riders team. When Kenn was done we all met at the Hard Rock Café. Ginger, Rigel and Meagan were also there. They’re my fellow reporters at Wormholeriders. You can drop them a line on Twitter by clicking on their Twitter names. Ginger is Offworldtravelr, Rigel is SciFiFanGirl616 and Megan is MeaganSue. So were my husband, Jeremy and Meagan’s friend Gabe. We all ate dinner and wondered about preview night. I also had a drink called the Hulk. The Hard Rock made it in honor of Comic Con. That was a tasty drink! Potent but tasty! After dinner we all split up and had plans to meet inside the convention center. I ended up walking with Pierre. As we walked away Pierre warned me that we may have trouble finding the others. He also said he envied me because I would not forget my first experience walking in to Comic Con.

Wow! Truer words were never spoken. As we walked inside I’m fairly certain my jaw hit the floor. The sheer size of it is something I doubt I can explain. The exhibits were amazing! I could not figure out where to look first and then I saw it! I yelled at Pierre, “Bumble Bee! Bumble Bee! Bumble Bee!” At first I thought the real Bumble Bee from the Transformers movies was standing in front of us. Thankfully I had Pierre to help me navigate through the crowds. He walked me over to Bumble Bee so I could snap a few pictures. Oh to have my own Bumble Bee. But there was so much more to see! I would feel myself getting tugged in a direction and realize I’d stopped walking and was staring at an exhibit. That’s literally how great it was. Pierre kept me from getting run over and from blocking traffic. 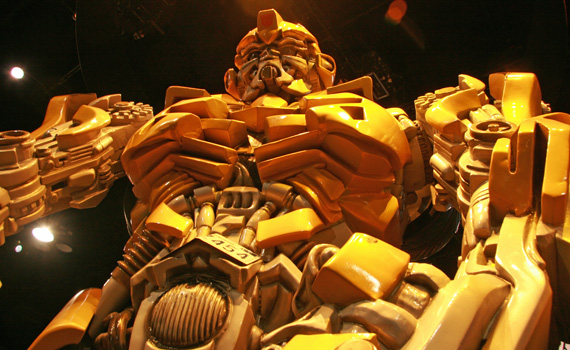 Lego C-3PO and R2D2 were cool. So were the characters of Harry Potter. I knew my friend Dave would get a kick out of the life-size Iron Man figure. That was, until I saw the collection of Iron Man figures with lit arc lights. As Darth Vadar would say, “Impressive!” The Warner Bros.’ tower is nifty, too. No joke I wish I had two whole days to spend in there. I could do some serious geek shopping. Hopefully I can go back. I only was able to see a fraction of what is there. Know this: Preview Night really means you just get a small glimpse of the Exhibitor Hall. 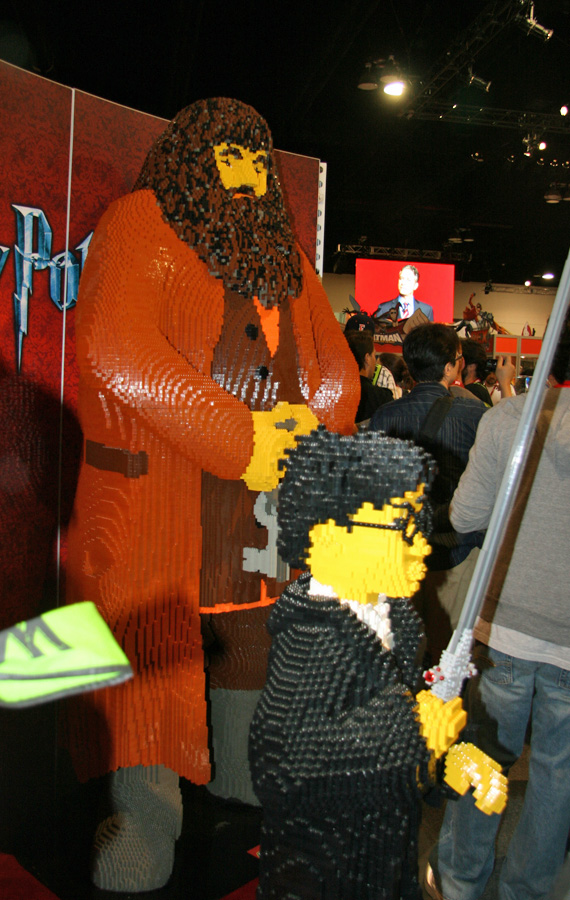 Before I knew it our time was up. I left the convention center with the knowledge that I will be overwhelmed this week. I’ll also wish there was a way to clone myself. When I last left Pierre he was in the Hard Rock Hotel bar with the Wormholeriders team. At least he was in good hands. 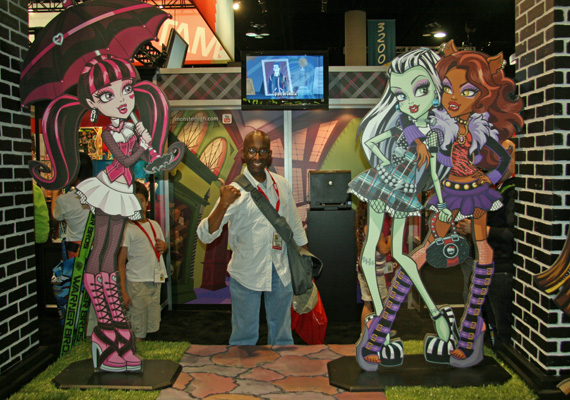 So my motto for tomorrow: Carpe diem! Actually that should be Café Diem! They’ve turned a restaurant into a recreation of Café Diem on Syfy’s hit show Eureka. It would be cool to find out how Until next time, Comic Con fans! Fingers crossed that I survive the next few days!

Thanks for reading my first experience at San Diego’s Comic Con 2010. Please feel free to leave a comment here or drop me a line at twitter by clicking on my twitter name: whovian99.