I’m back home now and far, far away from Minnesota. No more Uggs and hoodies and 60 degree weather — I’m back to flip flops and tank tops and scorching heat. I’ve had a couple days to look back on the entire Creation Entertainment Stargate convention and one question that stands out is, “Did I REALLY play Rock Band with Brian J. Smith while Alaina Huffman and Gary Jones (among others) watched?” I’m glad I’ve got pictures as proof that it did happen!  It’s too bad you can’t see the massive grin on my face right now, however it looks much like my avatar below! 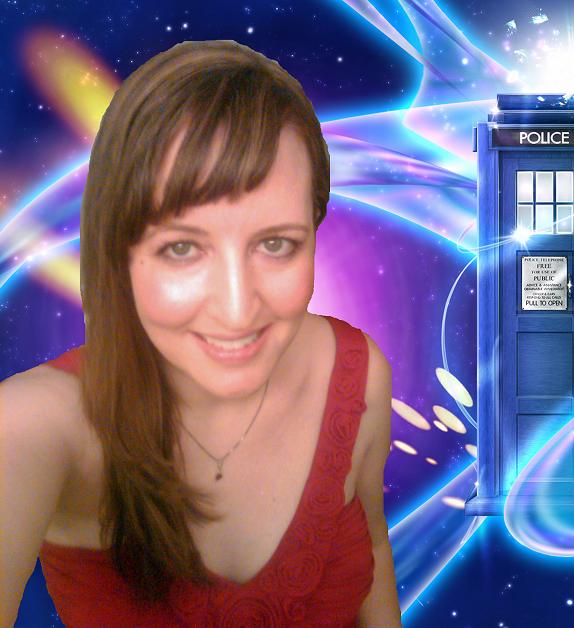 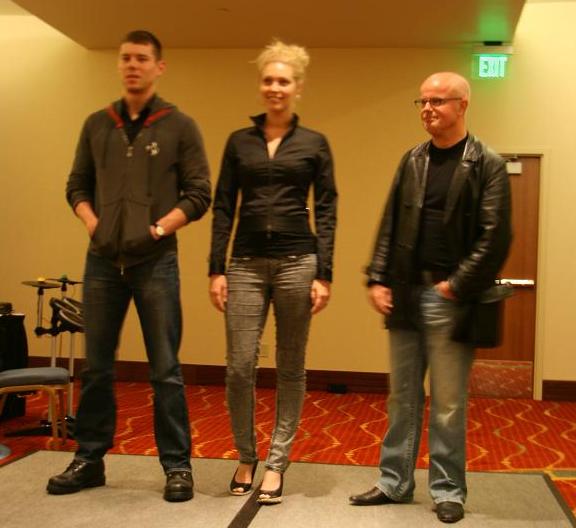 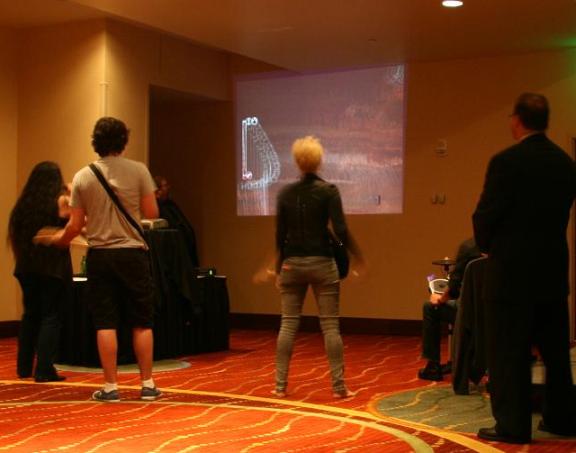 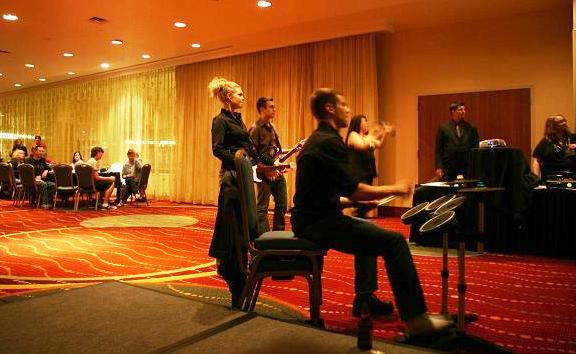 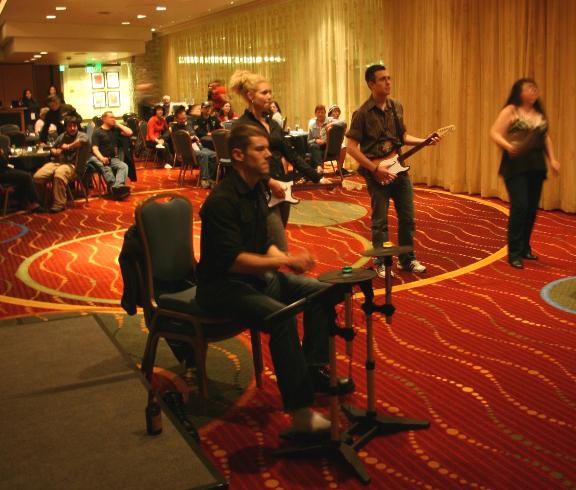 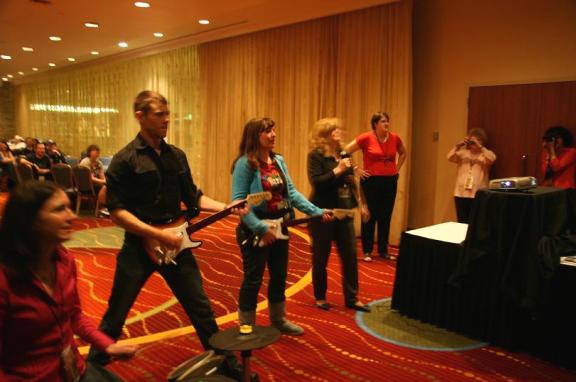 There are usually things at a convention I wish I could have done if I’d had more time or things I may have skipped if I could have traveled back in time and changed the past. I don’t feel that way this time. This was a much smaller, more intimate convention. I was fortunate enough to see all the guest panels and even catch the costume contest. 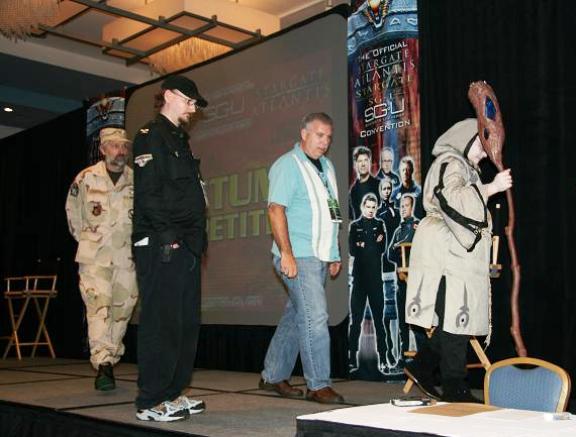 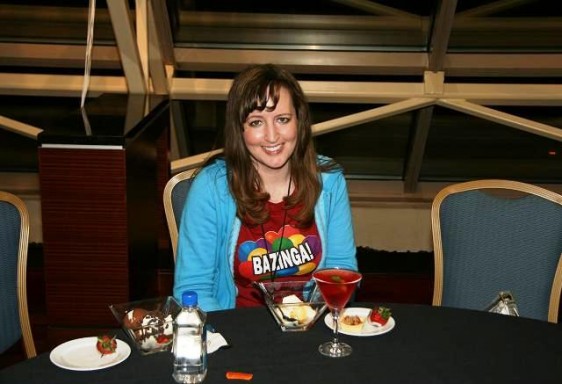 Of course there was that fantastic dessert party, the autograph sessions and the photo ops. I did it all. I just realized there is one thing I would change — I would play Rock Band before the convention and give Mr. Smith a run for his money. I would have to play it a lot though. And maybe get a little tutoring. Yes, he’s that good. Plus, he’s a good sport — the kind of person with whom you want to play video games. During the Smith/Huffman panel it was mentioned that David Blue has Rock Band parties. How fun would that be? 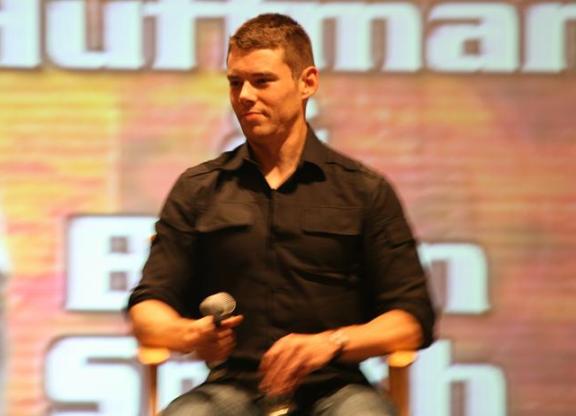 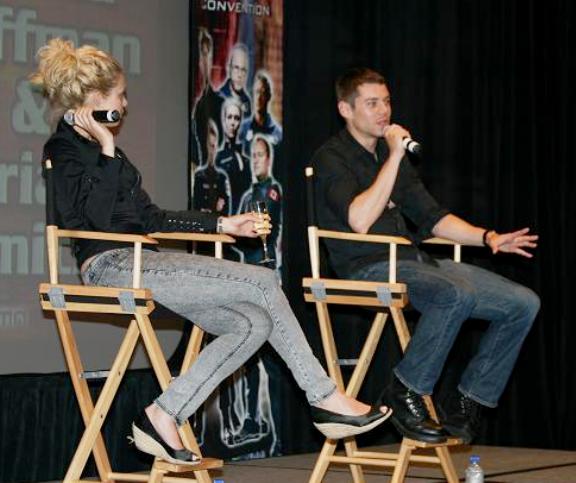 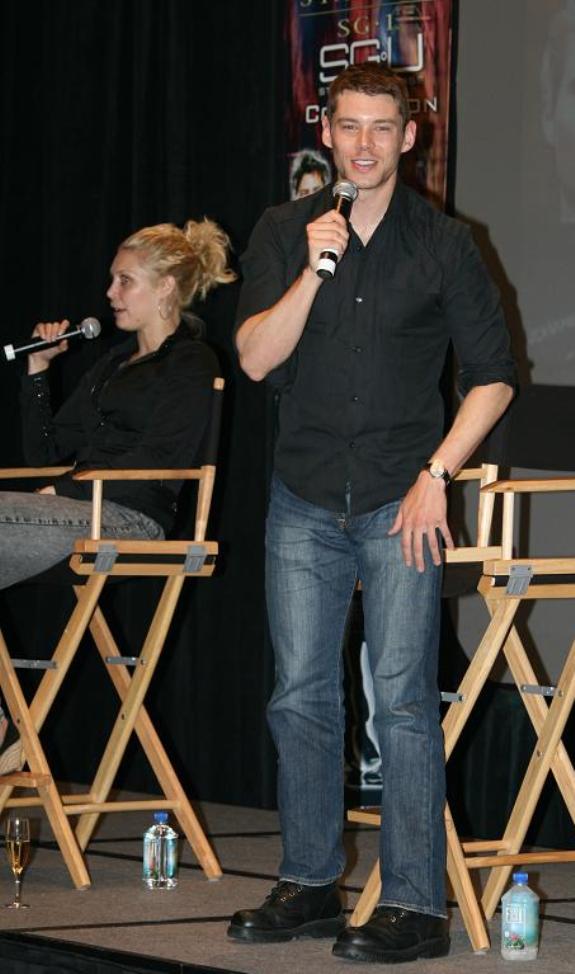 I’m also very curious about season two of Stargate Universe. I’m wondering just what stunt Mr. Smith gets to do that’s so fantastic. You see, they wouldn’t tell us. They whispered to each other up on stage and both agreed that this mystery stunt is spectacular. 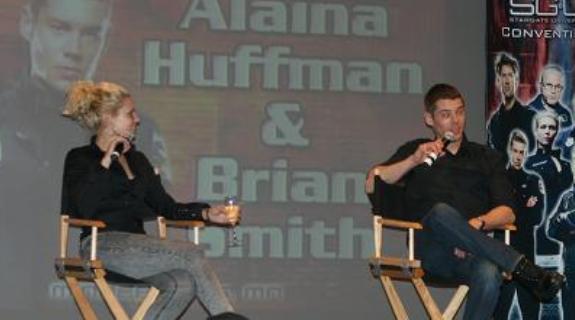 I suppose we’ll all have to tune in to the show to find out. I’m sure Ms. Huffman is happy she can now “speak Stargate” as she calls it. She said it had taken her a good two to three months to learn it. It sounds to me like the cast and crew at Bridge Studios will be setting the bar even higher for the next season of SGU. 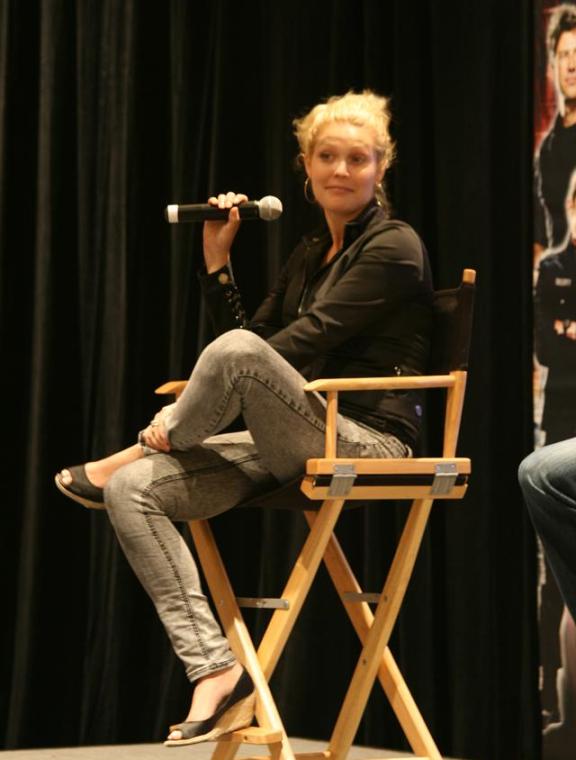 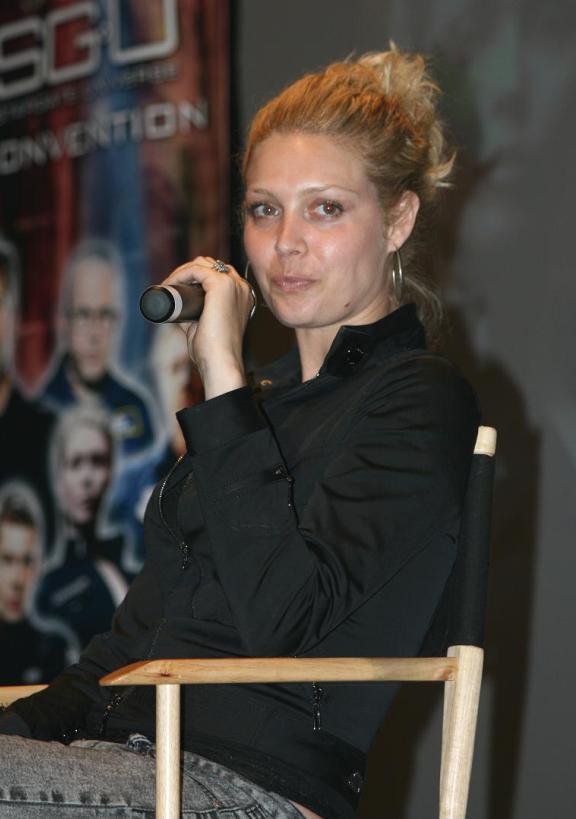 It was great to see Gary Jones again. He is a comedian for a reason: he’s hilarious. I keep thinking about this one story he told us and I can’t help but laugh. Mr. Jones was “on the set of Stargate SG-1“. He was doing a scene where he walks backwards off the set. The director asked him if he could leave the scene “in a manly way.” Mr. Jones’ then demonstrated his “unmanly” walk and it was quite funny. He calls his experience working on Stargate SG-1 “the most fantastic gig.” I have no doubt that it was. 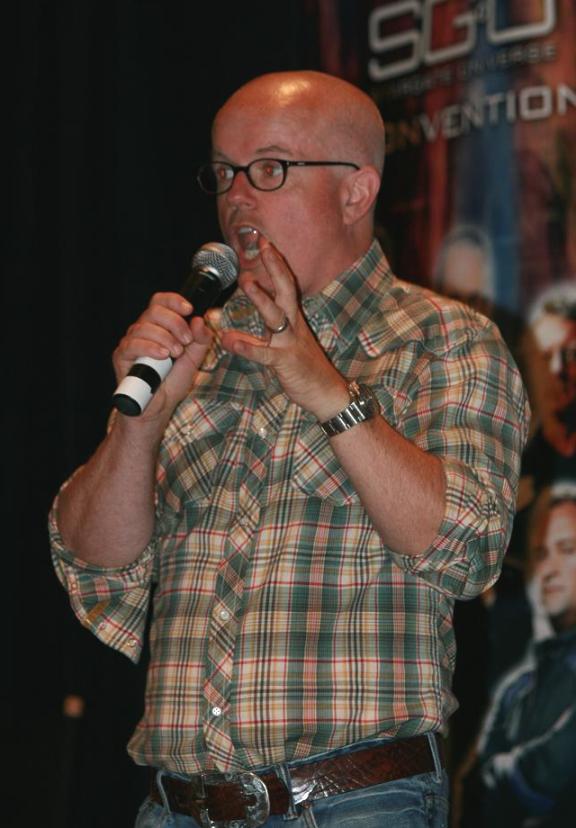 It was great watching a clip of Mr. Jones doing a Walter scene as William Shatner. Creation Entertainment had surprised him with the clip. The expression on his face was priceless. Later Mr. Jones said he’d never before seen it. He explained that Peter Deluise (Stargate Director) always made him do the scenes as Shatner and that’s why the clip exists. 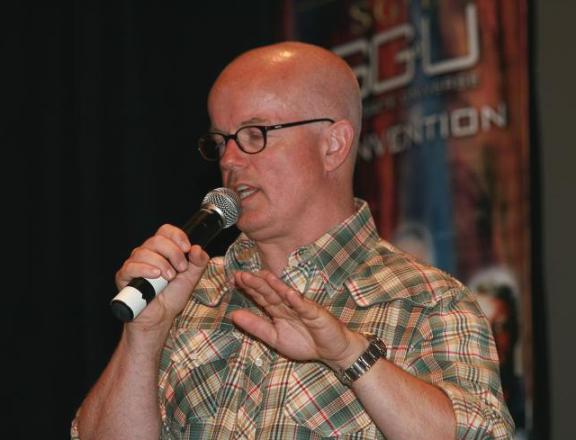 If that’s not proof of a fantastic gig, I don’t know what is. If you’re wondering, Yes, Mr. Jones does a side-splitting William Shatner impersonation. I recommend seeing him perform live wherever you can. Fortunately, Sanctuary fans can look forward to seeing Mr. Jones in an upcoming episode. 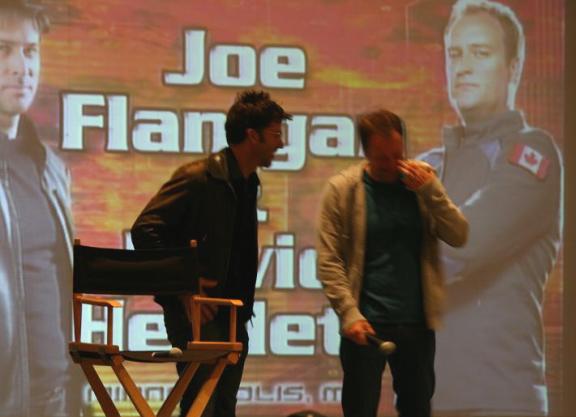 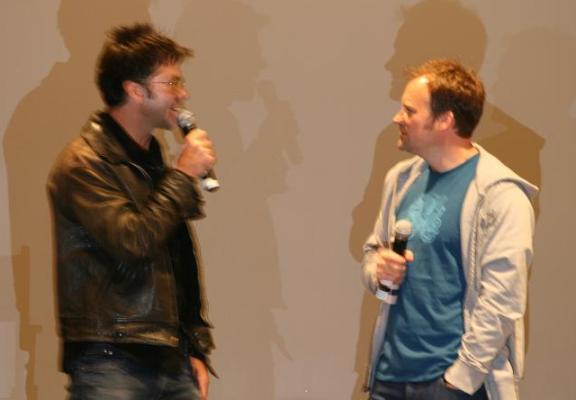 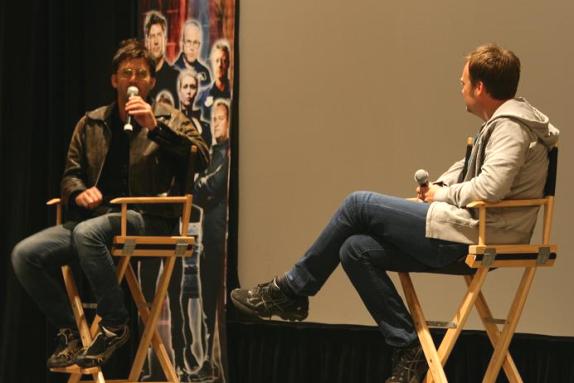 I was equally thrilled to see Joe Flanigan and David Hewlett again. I’ve never seen them together in a panel and I have to say that was a special treat. They are snarkastic, funny and unpredictable. Both actors discussed future projects. Joe is trying to work out the next TV show that shoots in LA so he can stay close to his family. He is also working on a western/thriller type film called “A Good Day for It,” as well as being in discussions with SyFy for a show. Mr. Hewlett is in the newly released movie, “Splice” and says there has been renewed interest in “Starcrossed.” 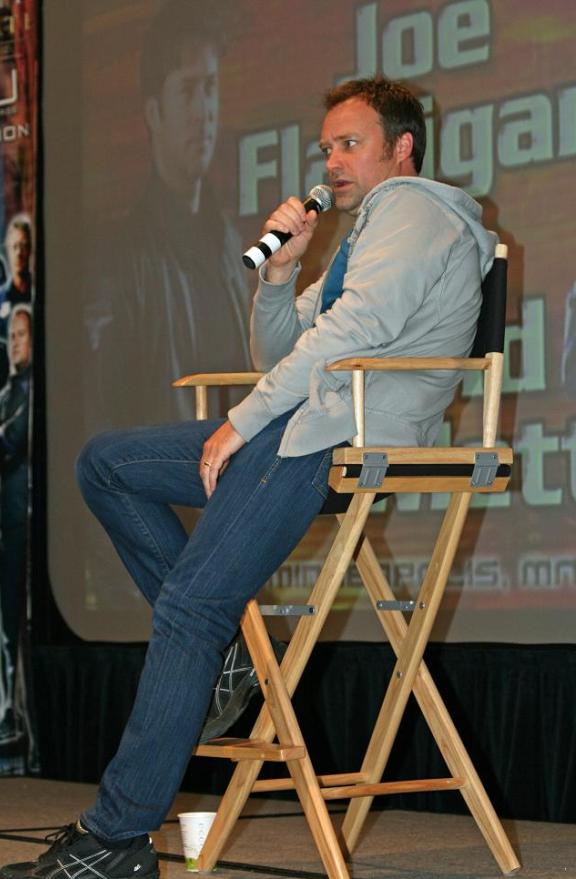 When asked if either actor would appear in Stargate Universe both Mr. Hewlett and Mr. Flanigan said that they would. My fingers are crossed for season two! It makes me wonder, who would win in a battle of the brains, Rodney or Rush? I’d say Rodney. Not that I’m biased. Or what about Rodney versus Eli? My two favorite geeks. And think of Sheppard vs. Telford. Or Sheppard and Rush. There are so many ways to have fun with those two. 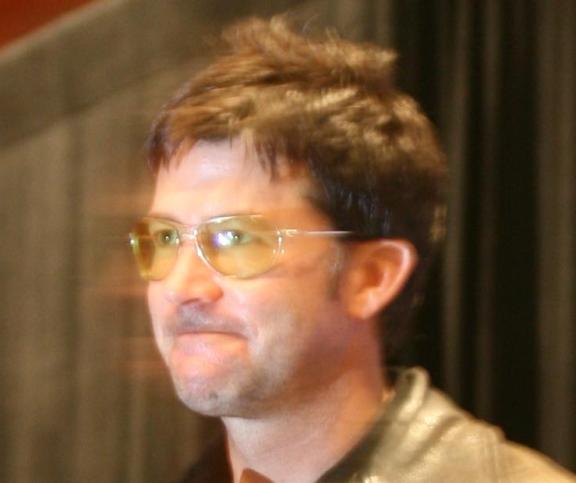 I was also fortunate enough to ask questions to the guests at the panels. I asked Joe how many dogs he currently owns and if he’s ever had six at once. It was a question I received on Twitter. Joe said he grew up with six dogs, two Swiss Mountain dogs and four St. Bernards. I own two Great Pyrenees myself and all I have to say is WOW! If you don’t know, those are all very large dogs. With lots of fur. And slobber. 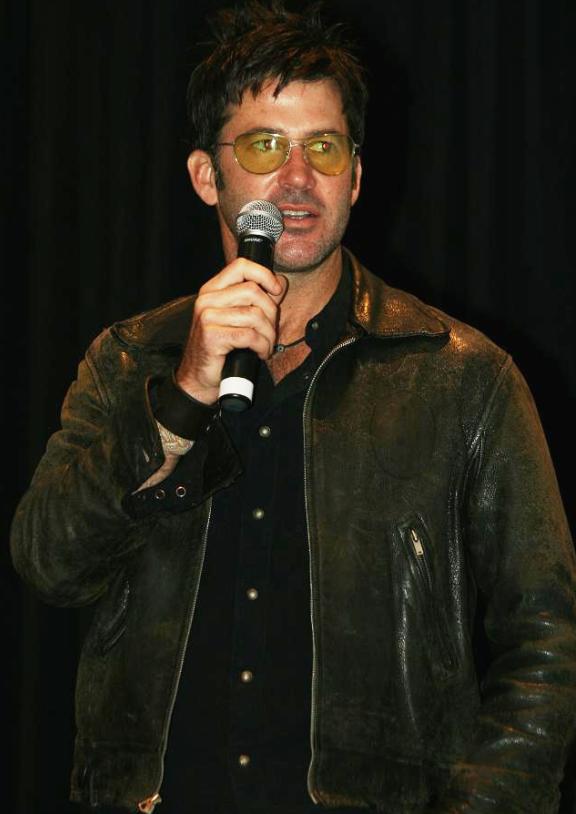 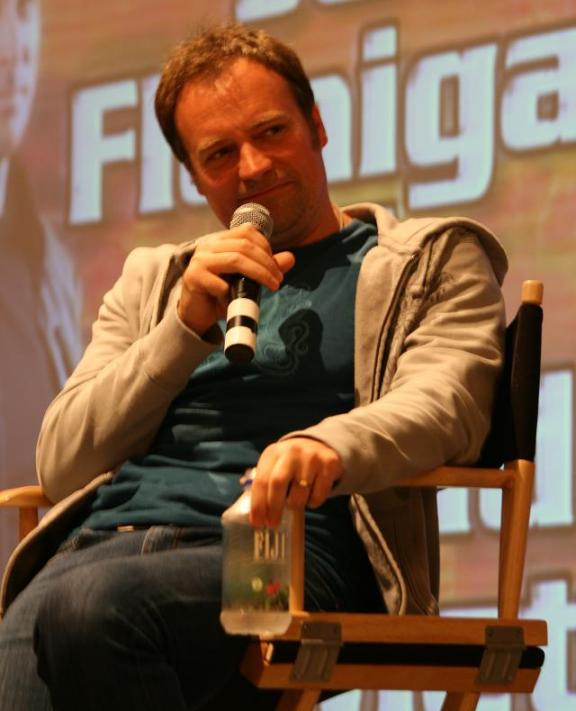 My question to Mr. Hewlett is one many fans have been asking: Will he be attending Dragon*Con 2010? He has said yes on twitter but Dragon*Con has not listed him officially on their website. Mr. Hewlett said that his agent has been handling it. As far as he knows he is all signed up and set to go to Dragon*Con. 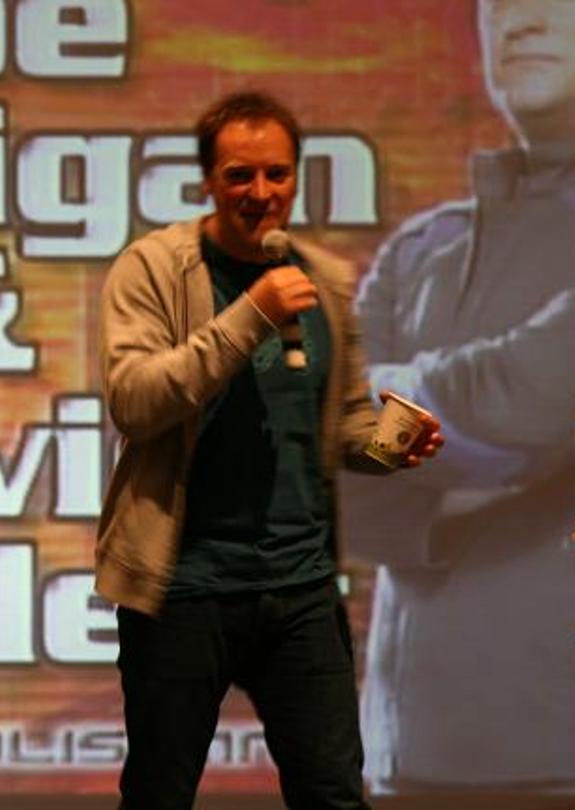 I took a chance this time with my photo ops. I’ve always done serious ones. One exception has been group photos. It’s always easier to look like a major geek when your friends are with you. I’m going to be taking more chances in my photo ops in the future. I sincerely thank Mr. Hewlett and Mr. Flanigan for being such good sports. 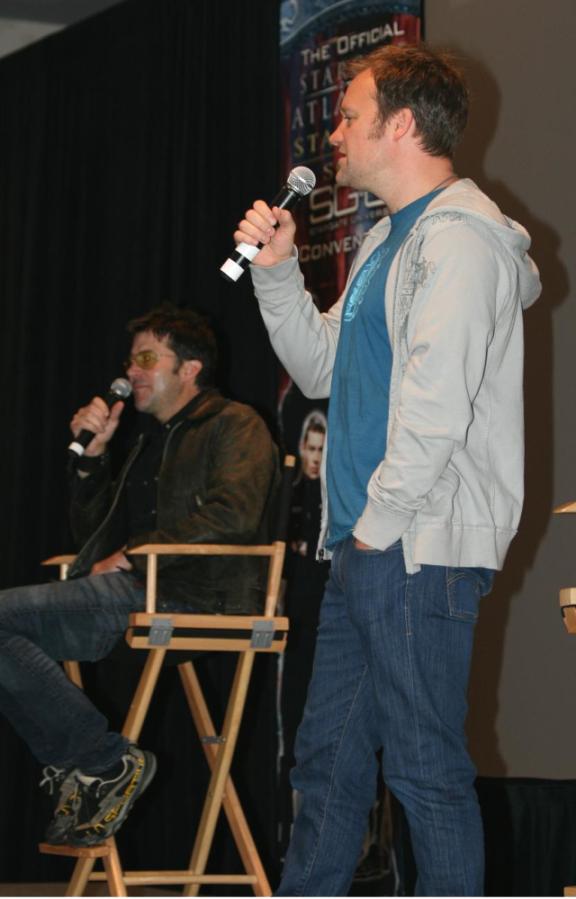 I have one last funny story to tell. Every squirrel knows about the yellow rubber ducky. It’s become a sort of mascot for the squirrels. This is because there is a hilarious bathtub scene in the movie “A Dog’s Breakfast.” If you haven’t seen this movie yet what are you waiting for?! The bathtub scene alone is reason to watch the movie. One of the squirrels brought something very special for Mr. Hewlett to sign. I must say his reaction was quite priceless. 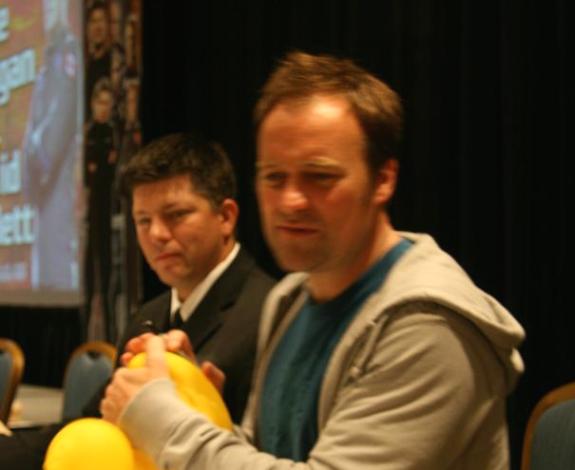 I’m not sure where this squirrel found such a massive rubber ducky. The entire autograph line burst out laughing when she pulled it out of her bag to be signed. I think Mr. Hewlett was genuinely shocked to see it. And then he recovered and asked, “WHERE do I sign it?” He decided to sign it right under the tail. That’s the Squirrel King as I know and love him. 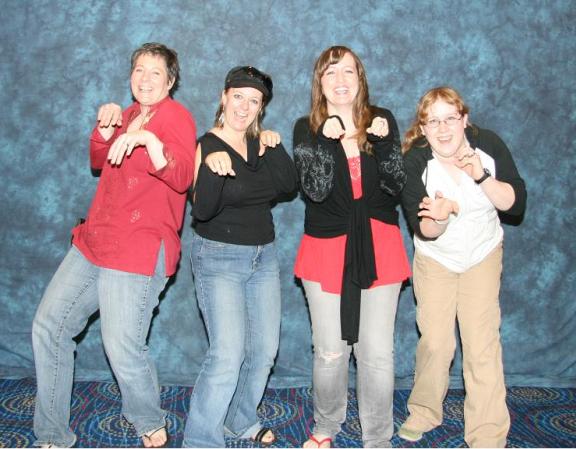 Moments like these above are why conventions are heaps of fun to attend. This is especially true because a fan never knows when such a moment will happen — not to mention getting to ge

ek out with dozens of fans who feel just as passionately about the genre as you do. This con was no exception.

Until the next one fellow sci-fi fans, please feel free to contact me on Twitter by clicking my avatar (right) or by leaving a comment here at WHR! Thank you.

9 thoughts on “MinCon’s Many Marvelous Moments for Stargate Minions!”

Wed Jun 23 , 2010
Welcome back Stargate Universe fans! The last episode of season 1 took us on a thrilling ride with what I think was the best cliffhanger of all the Stargate series, leaving so many storylines unresolved. Sure, we can do our best in speculating about who makes it or not next […] 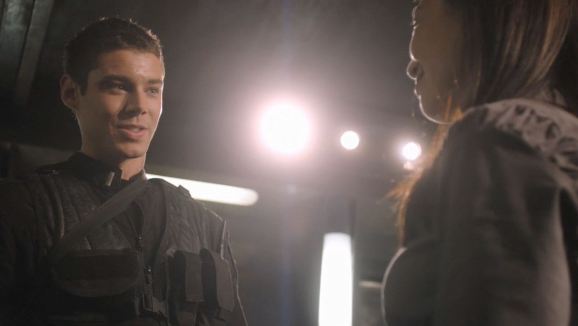