First, I have a new nickname. Bossy Trish. More on that later! Sunday, the final day of Creation Entertainment’s MinCon Stargate 2010 started off great. I slept in. Woohoo! Actually it wasn’t a problem because the much anticipated David Hewlett / Joe Flanigan panel wasn’t scheduled to start until after noon. I was able to get breakfast and relax in my room so I’d be nice and ready to tweet my heart out during the panel. Little did I know how much I’d need that energy. 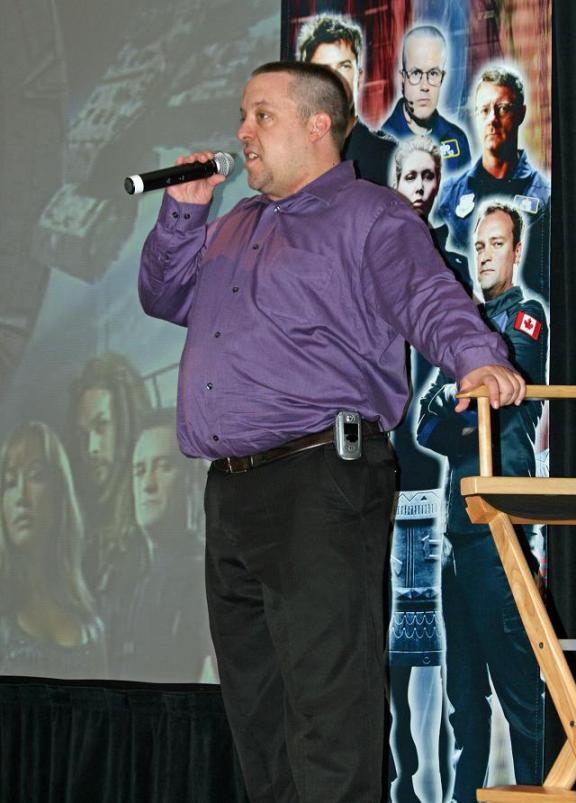 I arrived at the panel about ten minutes before it started. I could feel the excitement in the air. Obviously I wasn’t the only Hewlett/Flangian fan in the room. Panel host Chad from Gateworld (above) announced Mr. Hewlett and the room exploded in applause. 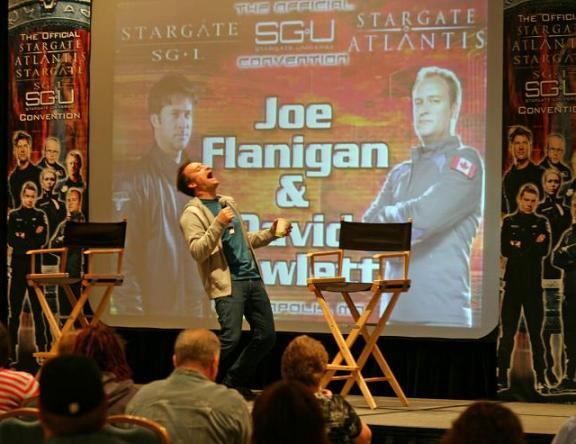 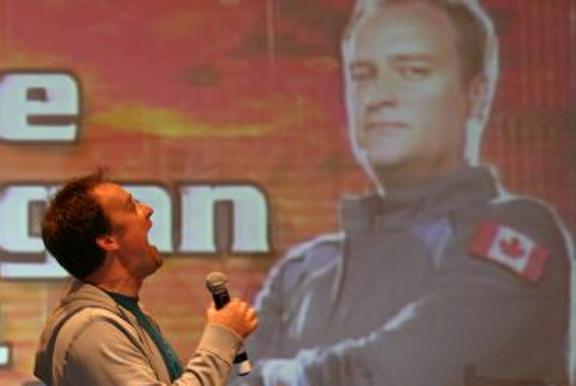 A man in jeans, blue t-shirt and gray hoodie bounded onto the stage. He was none other than Mr. Hewlett! When the applause died down Mr. Hewlett thanked us and then asked, “World cup anyone?” Something I didn’t expect because he’s said before he’s not a sports fan. Turns out Jane Loughman, Mr. Hewlett’s wife, has gotten him into soccer. “I’m not sure who to cheer for,” he said. “Can it be Engl-america?” “Or how about the winner?” 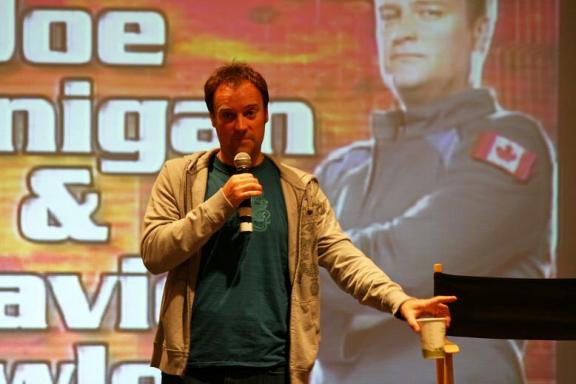 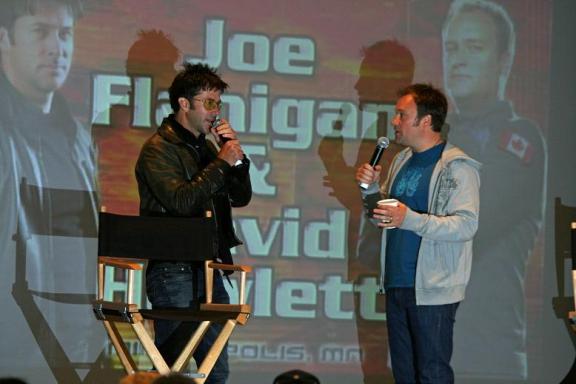 Mr. Flanigan was dressed in jeans, a dark button down shirt, brown leather jacket and yellow tinted sun glasses. He joined Mr. Hewlett on stage and then the real fun began. If you are a fan of either of these two men you would love seeing them together on stage. When asked if Mr. Flanigan has always been a fan of the sci-fi genre he said that he hadn’t and in fact is, “Still learning science fiction.” He noted that so many of the lines made no sense to him, making learning them a challenge. Mr. Flanigan and Mr. Hewlett spoke about everything ranging from Jason Momoa (Ronon on Stargate Atlantis) living with Mr. Flanigan for a time to how seriously Paul McGillion takes his wrestling. Apparently Mr. Flanigan challenged Paul McGillion to a wrestling match found himself on the floor quite quickly. His advice is to not wrestle Mr. McGillion. Ever. 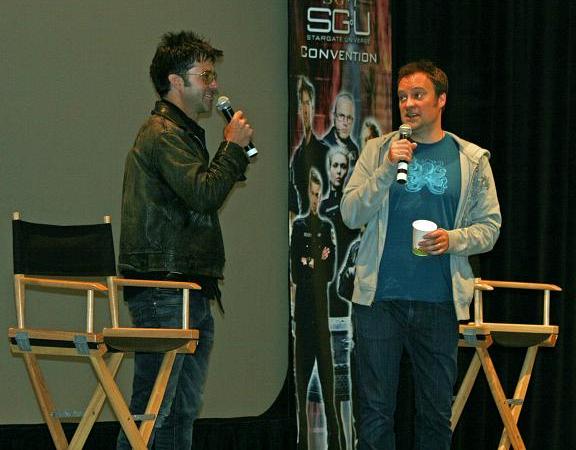 One fan asked how the two actors each got their start. Mr. Hewlett quipped, “I’m still waiting.” He had barely finished answering when Mr. Flanigan said, “I slept with David.” Both answers got laughter from the fans. Another good question asked by fan “What was the most frivolous thing you have bought?” Mr. Flanigan said, “Oh.. prostitutes.” Mr. Hewlett responded, “I hardly feel that’s frivolous, Joe.” They are quick, they are funny and absolutely fantastic together. Also you never know what they’ll say.

In fact, a little advice if you ever ask Mr. Hewlett a question. Expect serious snarkastic responses. I was feeling brave and got in line to ask questions. When it was my turn I said that I had two questions, one for Mr. Flanigan and one for Mr Hewlett. “Like we don’t know who’s up here on stage, thanks for reminding us,” quipped Mr. Hewlett. Thankfully I’m now fluent in snarkasm because I responded with, “Well, it could have been TWO questions for JOE, David.” He said, “Oh, right. Ok. I’ll remember that next time.” He certainly keeps a fan on her toes. 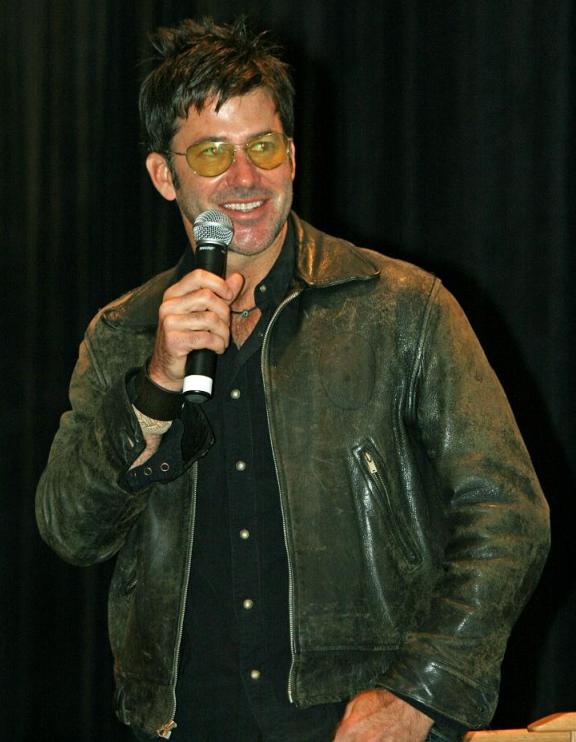 I thought an interesting question asked was what would each actor change about Stargate Atlantis aside from not waking up the wraith. Mr. Hewlett said, “Well, I would not have landed in San Francisco, that’s for sure.” Mr. Flanigan added that maybe they should buy a cheap camera and finish off the scene. It seemed almost that the panel had just started and then it was over. I can’t believe it ran for almost an hour and a half. 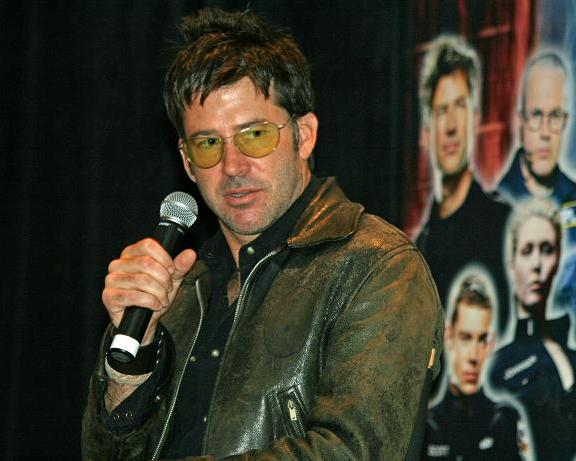 Literally right after the panel I walked very quickly to get in line for my photo op with Mr. Hewlett. It was a good thing, too because I was only about fourth in line. I’ve had a photo op with Mr. Hewlett and one with Mr. Hewlett and his sister, Kate Hewlett. I was trying to think of an original pose; something fun. Then it came to me… the squish hug. Well, the Squirrel King is quite squishable. When it was my turn I approached Mr. Hewlett with my arms out and said, “Hug?” “Always with the hugs…” said Mr. Heweltt but then he did hug me. He said, “Ok, what are we doing?” I said, “I will hug you.” He tried to hug me and I said, “No.. I’ll hug you but you don’t hug me.” He gave me a confused look and said, “What?” I said, “Here, put your arms down by your sides… then I.. HUG.. You.. like this.” And I wrapped my arms around him. Everyone in line started laughing. I couldn’t see Mr. Hewlett’s expression on his face but I was guessing it was a good one. I thanked him for being a good sport. He said, “Oh sure. My pleasure,” and smiled and I walked out to get in line for the Joe Flanigan/David Hewlett photo op. 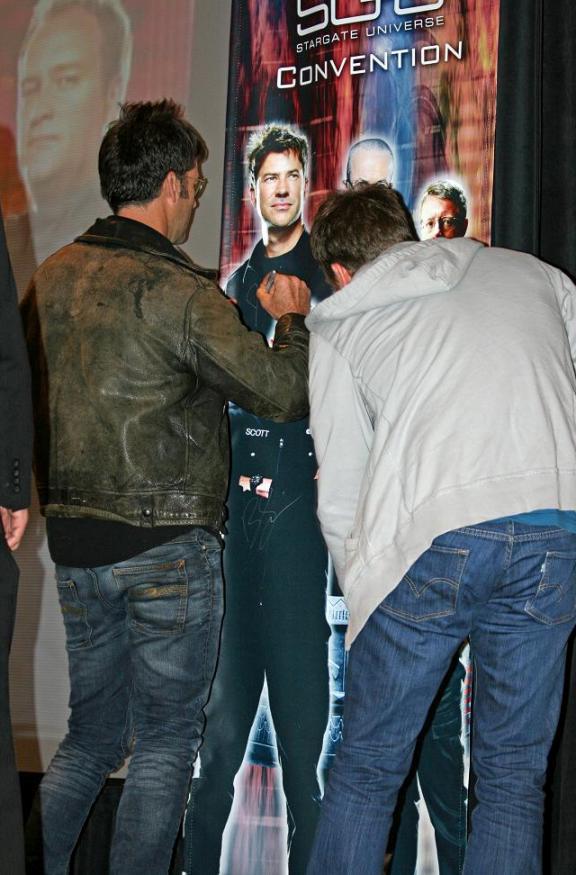 I had so much fun doing my photo op with Mr. Hewlett I decided I should do something similar with both Mr. Flanigan and Mr. Hewlett. So I told them both to hug me. Well actually when Mr. Hewlett asked, “What are we doing?” I said you hug me. Mr Flanigan said, “Oooh… Wow…”and stepped away looking hurt. I said, “No… You too!” His expression changed then he blurted out, “I’m NOT hugging David.” I said, “Not David, just me.” So, begrudgingly Mr. Flanigan put his arms around me, barely. Mr. Hewlett, on the other hand, looked happy. Again everyone in the room was laughing. Including me. I thanked them and then left the photo room.

Next up, autographs with both Mr. Flanigan and Mr. Hewlett. I was very fortunate that my photo ops were done in time for both actors to sign them. This is not always the case at conventions. I was anxious to see how each one came out. I have to say I’m thrilled with them! I sincerely thank Mr. Hewlett and Mr. Flanigan for being such good sports. As I waited in line I wondered what their reactions would be to the pictures. Mr. Flanigan seemed happy with his pose. Then he wrote on the picture, “Why is your hair so greasy, David?” Then he gave me that Shep smirk he’s so good at giving. 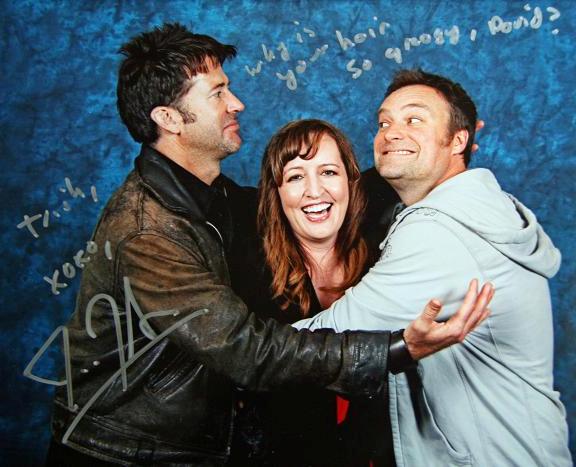 Then it was time for Mr. Hewlett to sign. I gave him the photo op where I’m squishing him. He looked at me and back down at the picture which had my name on a sticky note and said, “Ah, Bossy Trish.” So yes, that’s how I got my nickname. If you didn’t know, Mr. Hewlett is great at giving out nicknames. When he saw the picture he exclaimed, “Oh hey! That came out well! That’s what I was going for.” I told him it was what I was going for too. I thanked him and said it’s my favorite photo so far. Mr. Hewlett signed it, “Trish, don’t go changing” then added, “Love ? David” I said, “Aw! You just broke my heart” and started laughing. He said, “Oh c’mon now…” which made me laugh more. I thanked him and told him I’d see him at Dragon*Con. 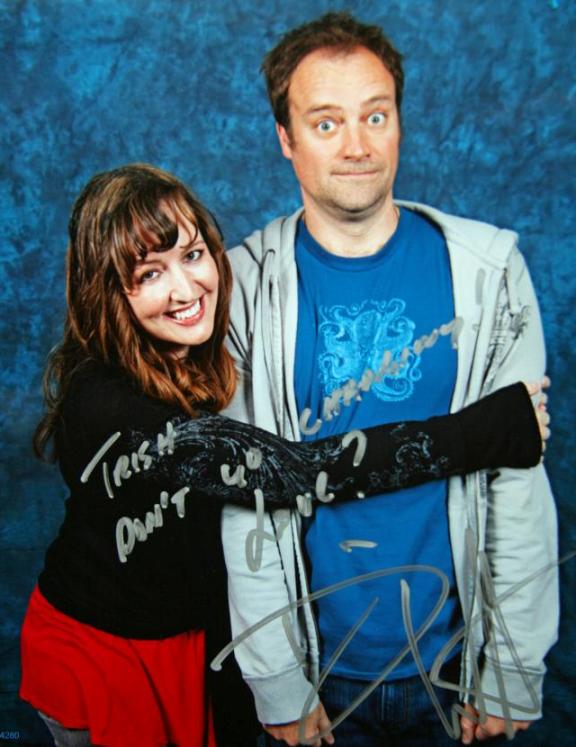 That was it. The convention was over. Part of me felt like crying yet the other part was so happy with how the weekend had gone. I’ve now met actors from all three Stargate shows. I’ve been to Minneapolis. And hey, I’ve even played RockBand with TV stars. Not too shabby. I hope you’ve enjoyed reading about my experience at Creation Entertainment’s Stargate Convention in Minneapolis, Minnesota. I try to tell the story so you feel like you’re there with me. Plea

se feel free to leave a comment or visit me on Twitter by clicking my image to the right. Until next time fellow sci-fi fans!

Tue Jun 15 , 2010
Fellow fans, As some of you will remember, I recently interviewed Josh Blacker of, most recently, Stargate: Universe, Human Target, and V. In the course of the interview Josh and I talked about everything from how he first got into acting – a rather circuitous and interesting journey – to […] 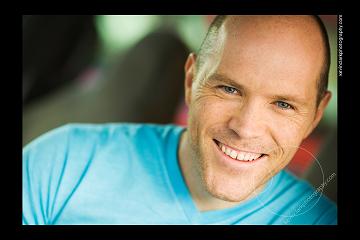