Hello everybody! Well, I survived the first full day of Phoenix Comicon!

I said yesterday how much I love all the costumes that people create and there were so many great ones today!  Two of my favorites would have to be Pac Man with Pinkie the Ghost and Davy Jones with Hammerhead Maccus from Pirates of the Caribbean 2. 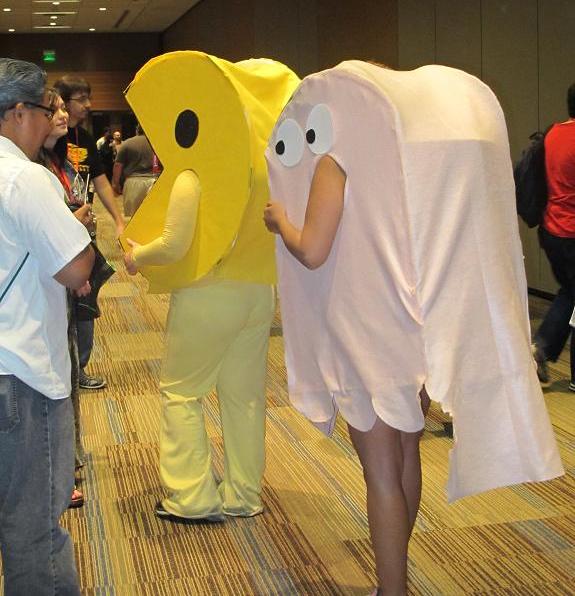 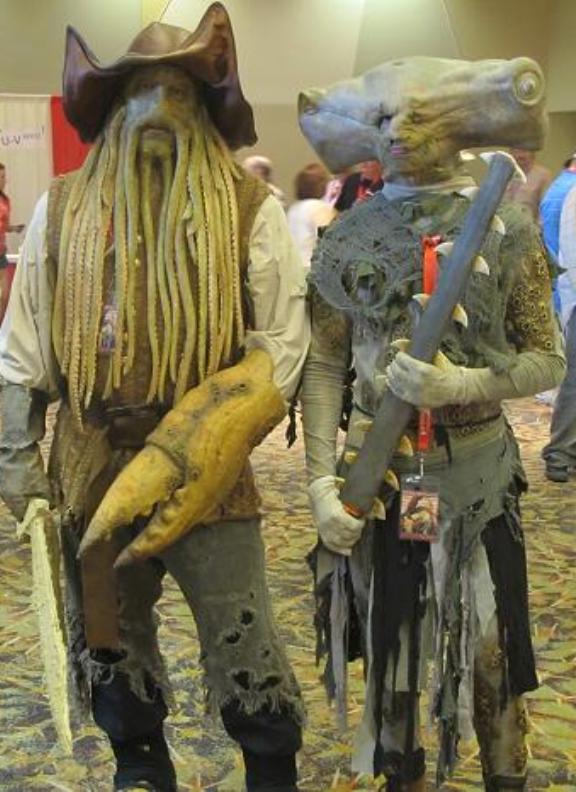 I wandered around the exhibitor’s hall a little bit more today and then hopped in the line to meet Felicia Day and Wil Wheaton.  The line wasn’t too long and moved fairly quickly.  Before I knew it, I was up to the front!  I bought The Guild season 3 DVD’s from Felicia and she was kind enough to sign the cover for me.  She is seriously such a sweet person! 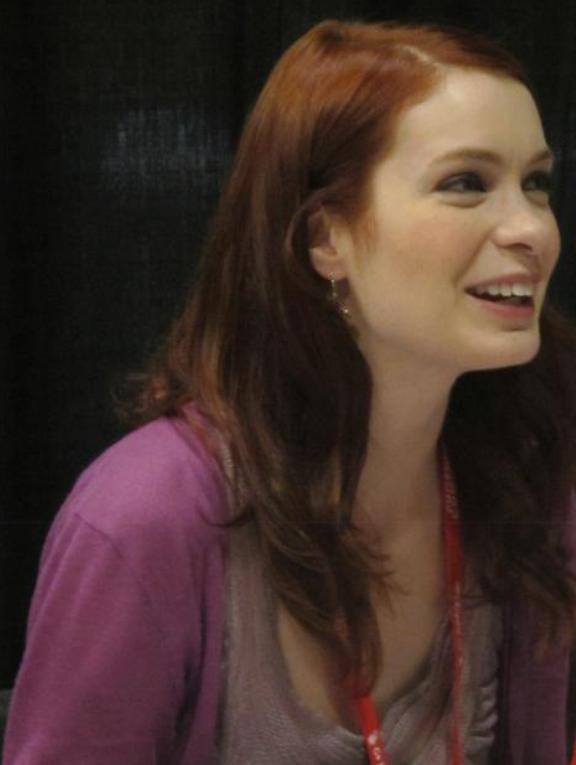 Sometimes in an autograph line you are really rushed, or the celebrity just slaps their name on whatever you have and hardly looks at you at all, but she took the time to chat with the fans individually.  She was also taking pictures with people even though it wasn’t her scheduled time and I was lucky enough to get a picture with her!  Of course, you know me and my love of funny face pictures, so I asked if she would make a face and she did not disappoint! 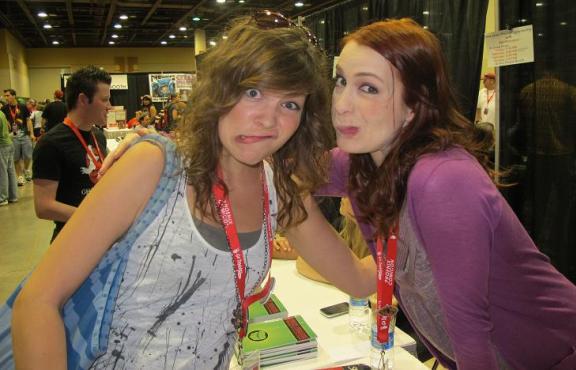 Next up was Wil Wheaton.  I asked him to sign the dvd cover for season 3 of The Guild as well since he plays a major role in that particular season and, I hope, in the seasons to come.  He was really funny and a really nice guy.  I asked him to take a funny picture with me and my cousin and I had been planning on just taking my normal crazy pictures side by side, but Wil said, “You know what would be awesome?  If you two act like you’re just taking a picture and I photobomb you!”  And you know what?  He was correct.  It’s probably one of my all time favorite pictures.  Ever.  And that’s saying something coming from me! 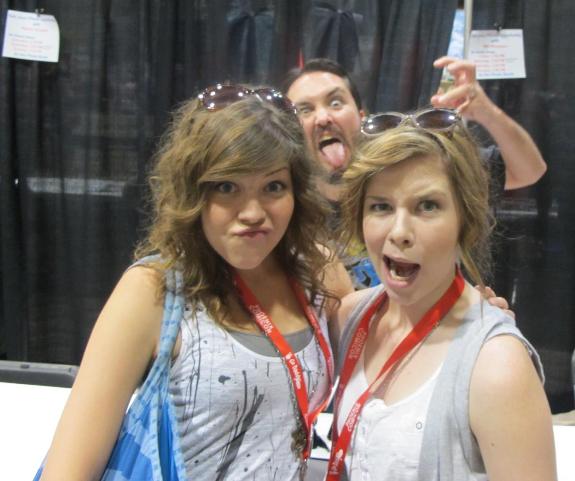 Okay, just another friendly reminder to all of you who have yet to take my extremely good advice and watch The Guild webseries, now would be the time to do it.  Go on.  Watch them right now!  We’ll wait for you…  Good job!  And now, you can bask in the glow of the amazingness that is those pictures with me.  You heard me.  Bask.  Now you understand.  I’m glad we’re all on the same page.  Anyway…  Where was I…  Ah, yes!

After meeting Wil and Felicia, it was time to head over to the room where the Stargate: Universe panel with John Scalzi was taking place.  If you have a chance to see a panel with Scalzi, I suggest you take it!  He is hilarious!  He talked about what he does for the show.  In his words, “You know how sometimes you’re at a convention and there’s somebody who says, ‘In episode five, you guys did this thing and it just doesn’t make sense. And I was just wondering why you thought you could get away with that?’  I’m that guy before that guy is that guy.”

So, what does John Scalzi do? He reads through the scripts, finds the little inconsistencies that us more hardcore fans will eventually see and he catches them before they get put on film.  Basically, he’s the guy that keeps us from ripping our hair out, falling on the floor and screaming, “WHYYYYY?!” at the top of our lungs when we see something that doesn’t work with what we know to be true in whatever particular universe it is we happen to be watching and I thank him for that.  There is nothing worse in my mind than getting pulled out of the story by noticing something’s off.  There’ll be more details on Scalzi’s panel later, so stay tuned! 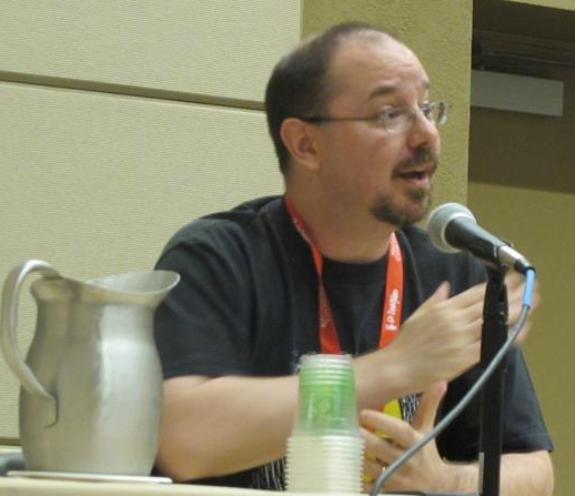 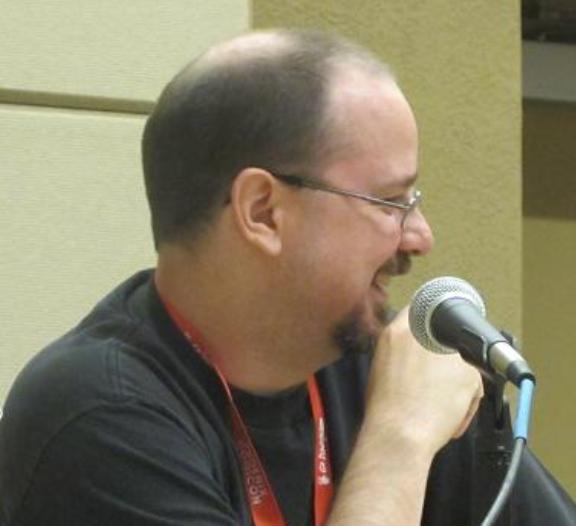 Once that panel was over, I had some business to attend to and then it was time for Wil Wheaton Presents: The Awesome Hour! And I can tell you friends, it was indeed an awesome hour.  And a little more since Wil let us run over by about 10 minutes once he knew there was no other panel scheduled after his.  I have a video of this hysterical panel that will be posted as soon as the re-mastering is completed, so check back for it!  Trust me, you don’t want to miss it. 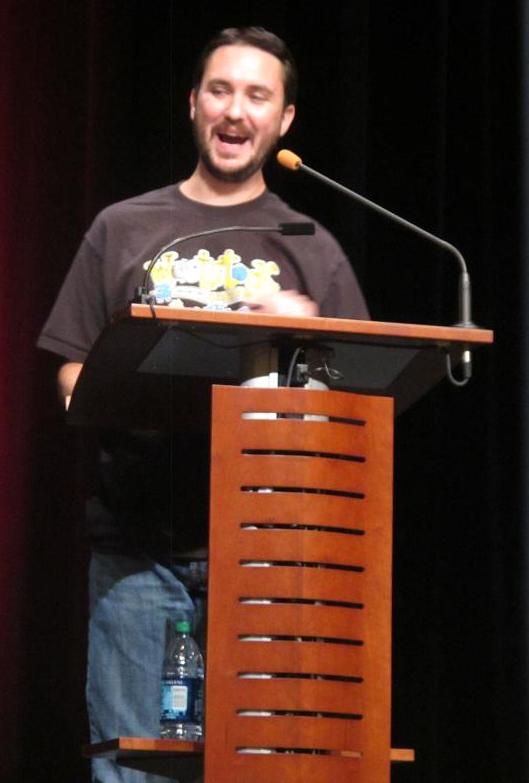 And that brought my day to a close.  Unfortunately, I was not able to attend the Geek Prom, also know

n as Wil Wheaton’s Rock Band that was in the ballroom of the Hyatt tonight because of a prior commitment, but I’m sure it was a blast and I can’t wait to hear about it tomorrow.

And now, I’m heading to bed so I can be well rested to tell you all about the exciting things I’ll be doing tomorrow.  One of which is attending The Guild panel with Felicia Day and Wil Wheaton!  I’ll be recording it (unless for some reason it turns out not to be allowed) and will have it up as soon as possible for your viewing pleasure.  Until tomorrow!  And as always, feel free to contact me on twitter by clicking on my avatar or leaving a comment down below!