As promised here is the recap of the latest episode which aired on Thursday April 29th. Images are courtesy of ABC-Disney.

Two years before the blackout, rookie FBI agent Janis Hawk is approached by people who want her to keep tabs on her new federal friends. Her handler is a woman named Carline who works out of a fish store. She’ll be her only contact with those who recruited her. This marks the start of Janis Hawk’s career as an FBI mole. 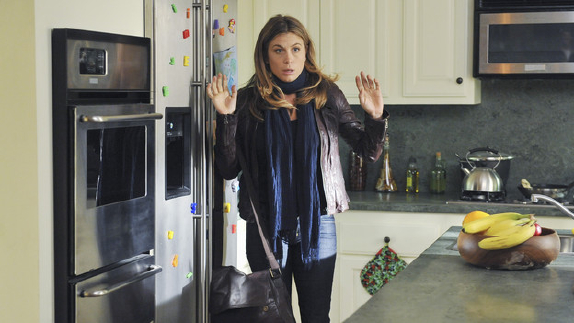 In present day, Mark and the team try to analyze the blueprints and photos that belonged to Dyson Frost. Chemical analysis of the photos reveals traces of soil from Afghanistan. That happens to be where Aaron is currently searching for Tracy. He meets with Malik, a man Wedeck sent to help him bypass hostile factions.

Unfortunately, Malik is unaware of one roadblock. Gunmen open fire on their car. Malik is killed and Aaron is pinned down. As the gunmen close in, another force of soldiers swarms from behind. All attackers are quickly neutralized. Aaron has no idea what’s happening until a familiar face approaches him. It’s Khamir, the medic who helped Tracy in his flash forward. At the moment, he’s here to help Aaron.

Regarding the blueprints, Janis brings them to a Professor Corey, who sees similarities to a device used calculate dates of solar eclipses. But the professor needs time to determine what the device in the blueprints calculates. Janis’s handler at the fish store wants all copies of the blueprints. So, Janis breaks into the professor’s building, swipes the blueprints and wipes out all Corey’s computer hard drives.

Another set of blueprints are on the Mosaic board. Janis attempts to steal them after hours, but Mark is working late. He wants answers. Janis says she needs the blueprints to make a copy for Professor Corey, who lost his set. Mark buys it, but the blueprints stay with him. Professor Corey presents his findings to Mark and Janis. It’s some kind of mechanical, astronomical clock designed to calculate a series of dates, with the first one being October 6th – the day of the blackout.

Dyson Frost’s last words were that Mark would be saved by the lady he sees every day. In chess, “lady” refers to the Queen piece. Mark just happens to have one hanging on his board. He smashes it open to find a ring inside, the same ring worn by those who remained conscious during the blackout. Lloyd and Simon realize the ring is a QED, or Quantum Entanglement Device. It’s what Lloyd and Mark were discussing in their flash forwards. Mark believes that the assassins who were after him on April 29th may have been after the ring.

Gabriel, the strange man who talked about the Raven River Experiments, startles Olivia in her house. He says Olivia made a mistake. She should be with Lloyd. Gabriel continues to rattle off past events where he was present. He tells Olivia not to buy coffee today from a bald man before fleeing the house. When she arrives at work, Olivia sees that a car has plowed into the beverage truck outside. One of those seriously hurt is the bald man who sells the coffee. 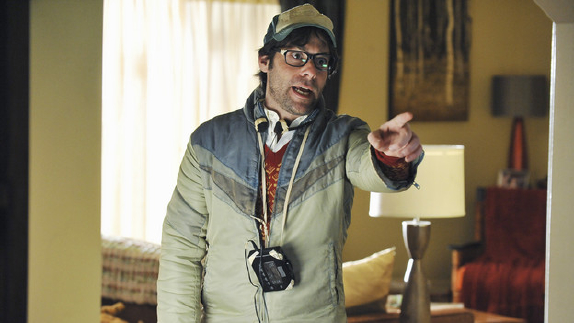 Olivia thumbs through old photo albums to see Gabriel present at the events he mentioned. Vreede asks Olivia to join him on visit a defunct Raven River psychiatric hospital in Arizona. It was the first place in the country to deal with autism, and perhaps savants. When they arrive at the Arizona hospital, Gabriel is waiting for them. He knew Olivia would be there. She always is.

Again, Gabriel says Olivia is supposed to be with Lloyd. He saw it. He leads them to a room where experiments were done. People were put to sleep. They would go on trips. Some were long, others short. Gabriel never knew where he’d end up. The doctor would always watch them. His name was Dyson Frost.

[Frost told Gabriel and the others they were special because they could remember things. When they woke up, they had to write down all that they saw. Vreede says, “You’re talking about flash forwards.” Olivia realizes that Frost used savants as human recorders. When he was finished with them, they were to be killed so others wouldn’t find out. Gabriel tells Olivia that, according the futures he saw, she’s always with Lloyd. She’s going the wrong way. He says, “You’re a piece of the puzzle. They can’t solve it without you.”

Two years before the blackout, rookie FBI agent Janis Hawk is approached by some people. This is before the folks who recruited her to be an FBI mole came into the picture. She meets with Marshall Vogel of the CIA. He informs Janis that a hostile organization may contact her for recruitment. When they do, Vogel wants Janis to say yes. She’ll be a double agent. We knew that about her already. What we didn’t know is that she is actually one of the good guys. We also don’t know how 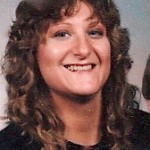 she’ll deal with her handler’s next directive: Get back the ring and kill Mark Benford.

I hope you enjoy this recap. As always please leave your comments or ideas to make this column better. Leave a post here on WHR or contact me on twitter.

Sat May 1 , 2010
Hi VulcanCon Fans! VulcanCon is the hash tag name I’m using on Twitter. It is really the convention by Vulcan Events. It’s right here in Tampa so it’s certainly the shortest I’ve traveled to a convention. So after dinner I headed to the convention. I was interested in what an […]