It’s been a few days since the Creation Entertainment Stargate 2010 convention ended and I’m still reeling from all the events of the last day. I’ll start from the beginning in a moment, but first let me say, though I enjoyed Stargate Universe before, I am definitely in love with it now due to my experiences meeting the actors.

I was awake incredibly early, but my first event wasn’t until N. John Smith’s panel at 10:30 AM. He was really fascinating to listen to. He didn’t talk much about Stargate Universe, as he is no longer working on the show – he has decided to retire – but he did talk a bit about the other series. He explained how it was to shoot Stargate Continuum in the arctic and especially about the submarine. Most of his panel was about technical aspects of producing. It was all quite interesting. 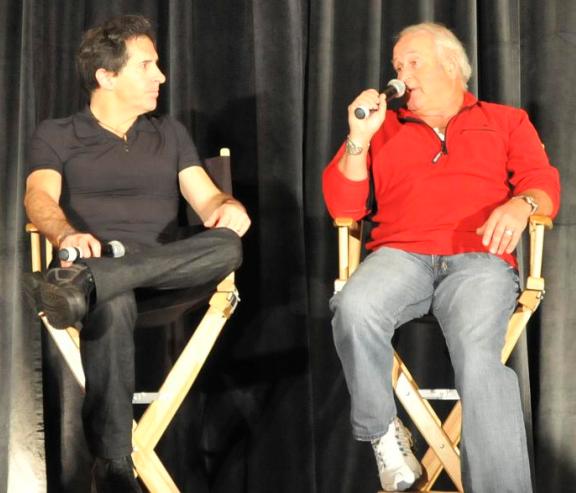 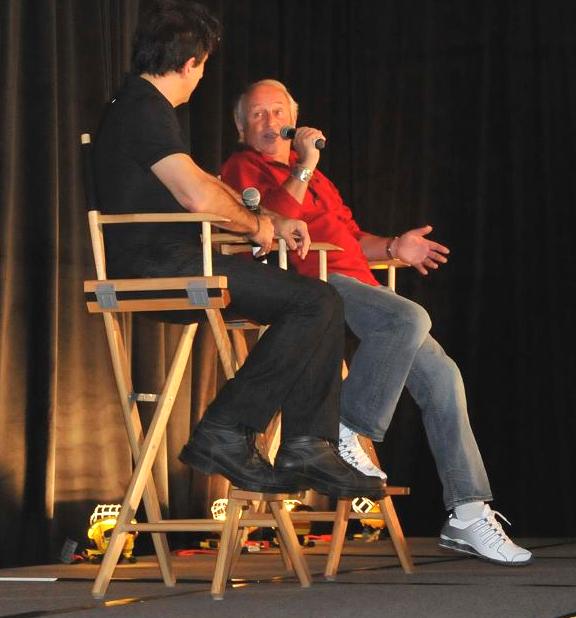 Next up was Rachel Luttrell’s panel. She started off with a song – which we all greatly appreciated. If you are one of the few people who haven’t heard her sing, you’re missing out and should go listen to her immediately on YouTube. She said she is working on a CD – which got a lot of cheers. Not even halfway into the panel, she got distracted and said it was because her son was at the foot of the stage. She reached down to pick him up and he spent the majority of the rest of the time on her lap. He was adorable, by the way. She joked about him having blond hair, considering her own features. She also told a few stories about working on the Stargate Atlantis set and about her co-stars. I really enjoyed watching her panel. She has a great sense of humor. 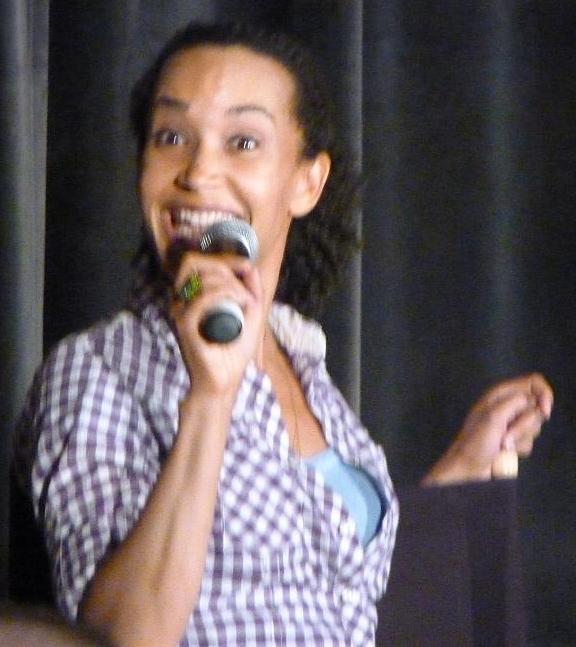 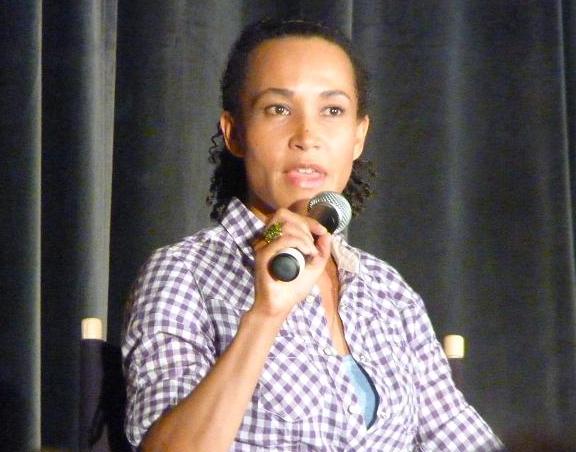 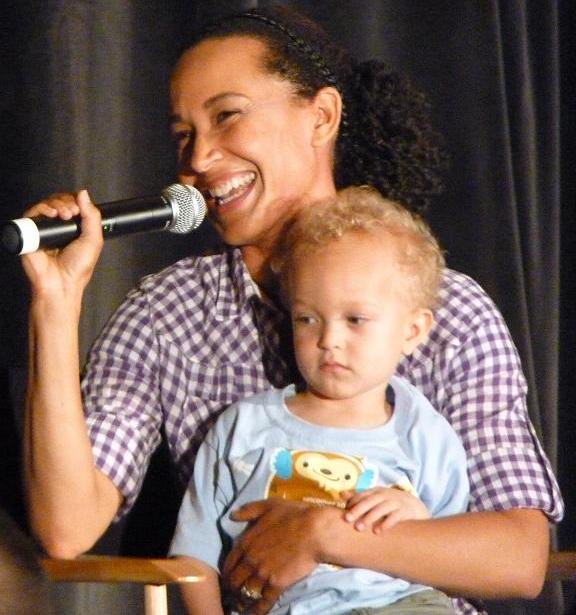 After her panel I had to run downstairs for her photo ops. I hung out with a couple of my friends while I was in line. She was taking some funny photos, like she’d just beaten someone up or was about to. I just got a normal photo with her, though, so no funny faces. 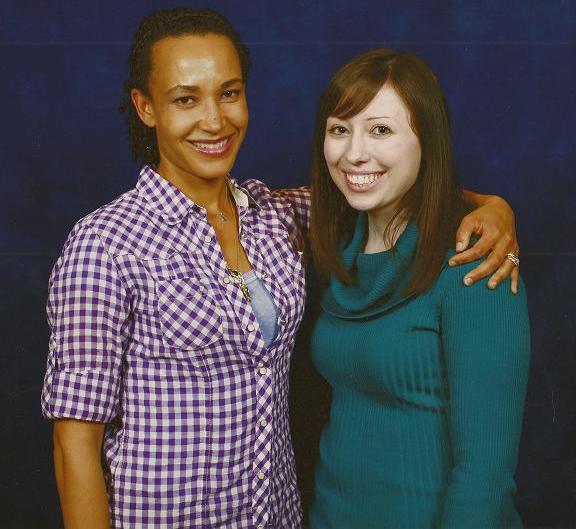 Immediately after Rachel’s photo were my photo ops with David Blue. I convinced one of my friends to stand in line with me and keep me entertained, even though she didn’t have tickets. When I got up to David, I shook his hand and introduced myself. He laughed that I was being so formal. I told him I loved his shirt – it was a Duck Tales t-shirt- and he asked if I watched the show. I told him I did (I loved Stargate as a kid) and he said anyone who watched it was cool in his book. I got a hug from him for my photo. Once the photo was taken I said I felt incredibly short and he replied that he was towering over everyone. We laughed and I thanked him before heading off. 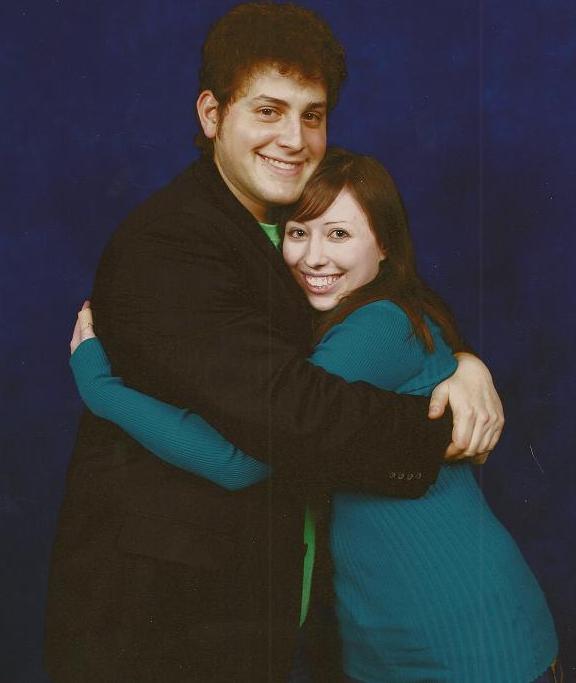 Brianna and I went down to get Brian Jacob Smith’s autograph. He was signing for awhile in the main area on a first-come-first-serve basis because he was going to have to leave early. There was no line (probably because he was signing for almost an hour and a half by the time we got there) so we went right up. Brianna had powder on her face from the mini-donuts she was eating and one of the volunteers was helping her out. Brian remarked that he loves powdered donuts, so she offered him one, which he took. We laughed because then he got powder on his face. I mentioned that there’s a world record for eating the most powder donuts, but that you’re not allowed to drink water while doing it. He said that would be impossible and you would die. We laughed, I gave him my photo to sign and handed him my WormholeRiders card. 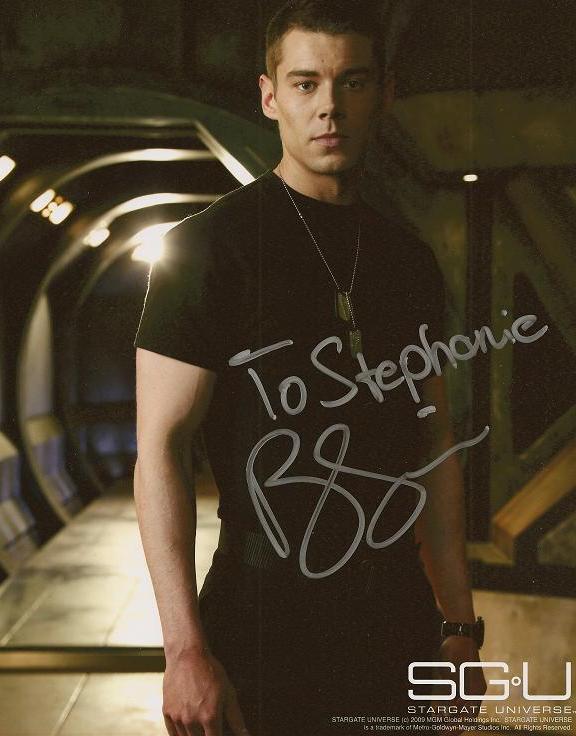 Brian said he knew who we were and asked if I was the one who tweets from the main WormholeRiders Twitter account. I replied that WR_Systems is in charge of that, then added that I’m ValaBlack. Brian recognized my display name and said it was great to meet people from Twitter because you really get to know people online. I thanked him and Brianna and I headed up for lunch.

After lunch with NaddyCat and Brianna, we went down for the Stargate Universe panel. The panel consisted of David Blue (Eli Wallace), Elyse Levesque (Chloe Armstrong), Brian J. Smith (Lt. Matthew Scott) and Mark  Burgess (SGU – Dr. Jeremy Franklin, ‘Sick Guy’ on Stargate Atlantis). Wow, if you ever get a chance to see those four together, take it. They told stories about trying to get through scenes but one of them would always mess it up. They said whenever they have a mess hall scene on the ‘Destiny’ set at Bridge Studios, it takes so much longer to film. 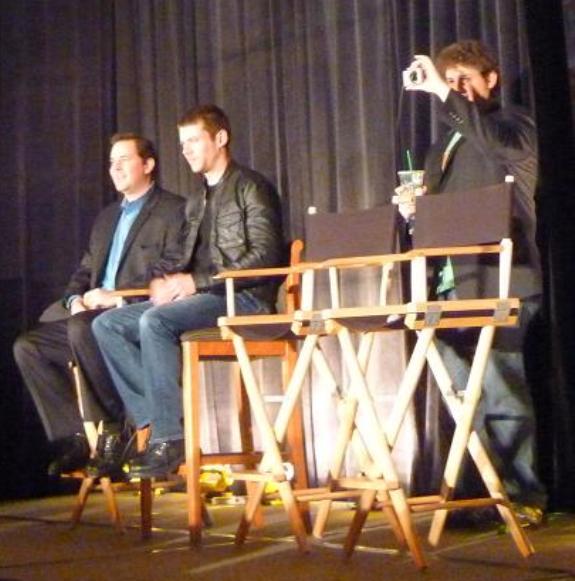 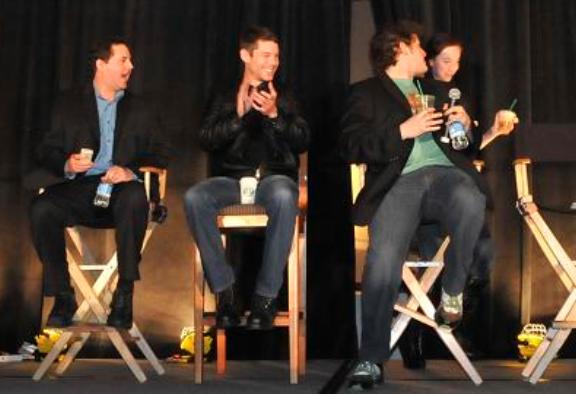 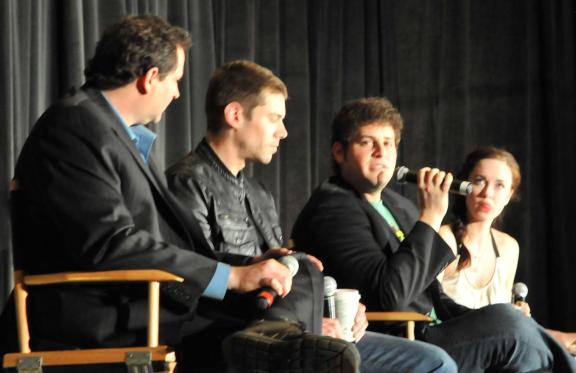 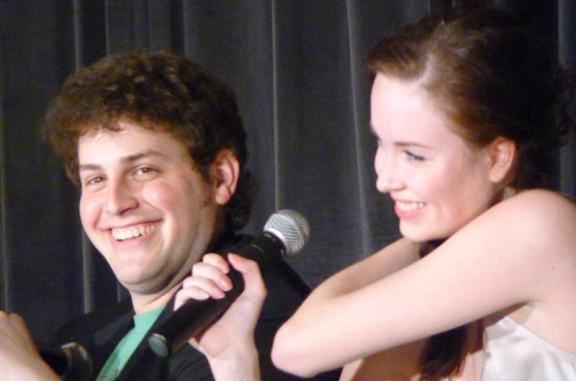 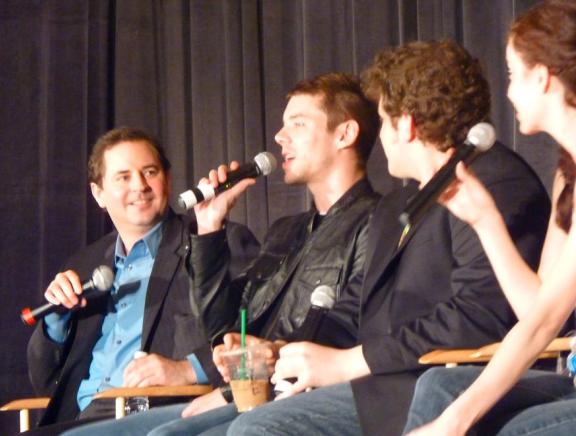 In general, they said, the more Stargate Universe actors in a scene, the longer it would take to film. They also talked about video games – evidently, Brian is addicted to Rock Band – and television. They laughed that the one question that stumped them was, “What is your favorite food?” It was a great panel and I am so glad I got to be there for it. All of them have an amazing sense of humor. 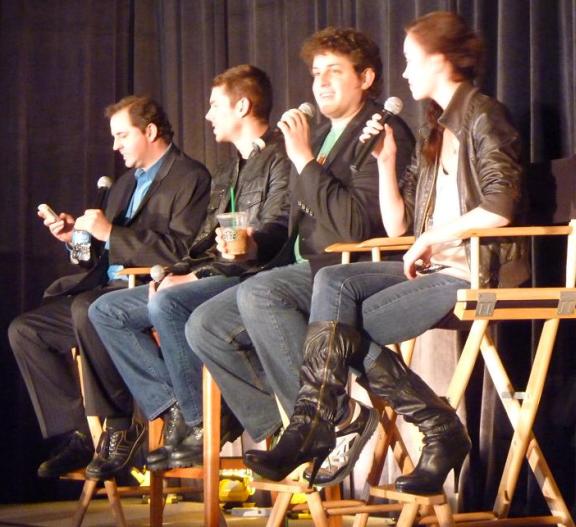 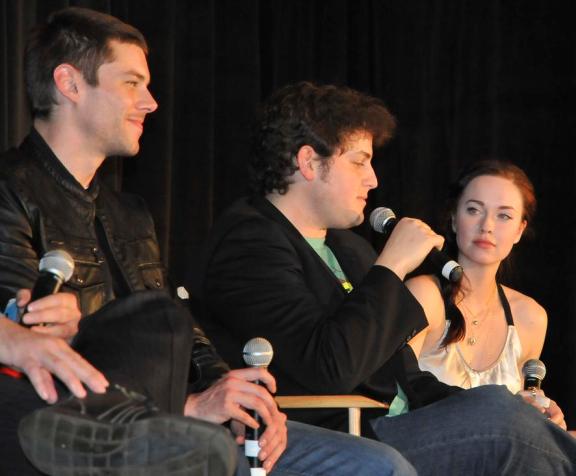 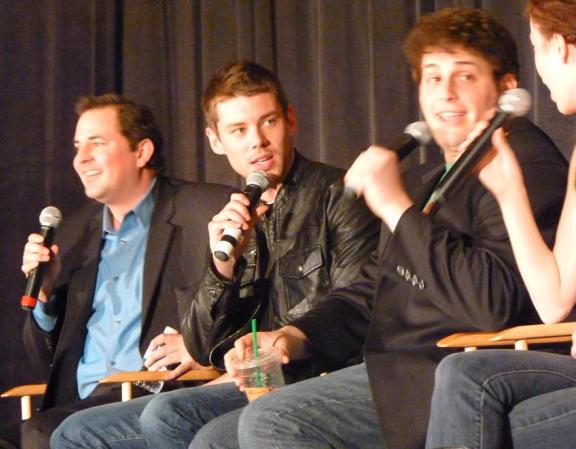 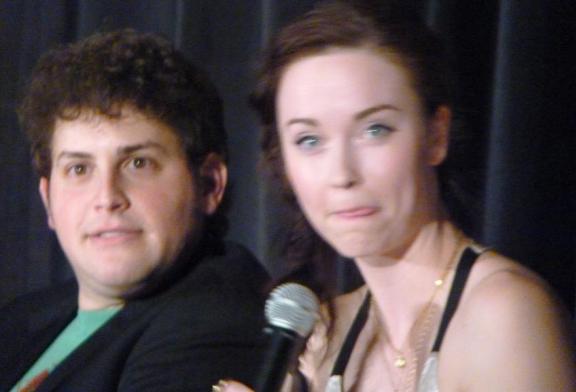 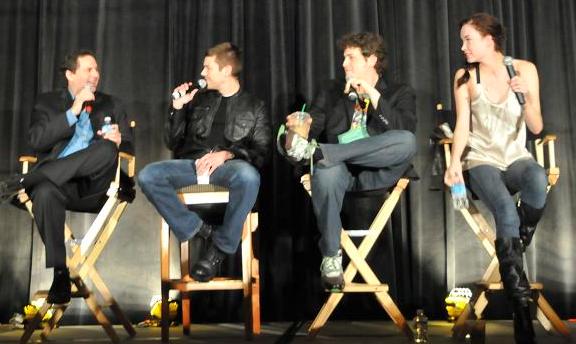 After this came the group photo ops with Elyse Levesque, Brian J. Smith and David Blue. I saw them do some funny poses, including one where they were playing Hungry, Hungry Hippo. I decided I didn’t want just a normal boring picture with them so when it came to my turn I asked if they were okay with doing weird faces. Elyse was right on board with that and Brian said that was okay. David asked what kind of weird face I wanted. I laughed and said the weirdest face he could possibly think of doing at that moment. I don’t have this picture in print yet, but everyone in the room was laughing, so unless I was the only one who actually did a weird face, I imagine it was pretty funny. That one was not ready by the time I had to leave. I will post it after I receive it in the second week of May.

Finally, the last event of the day were the autographs with Rachel Luttrell, Elyse Levesque and David Blue. The wait was insanely long and I was getting really nervous because I had a flight to catch. I found out later that I probably could have gone ahead in line if I had talked to the Creation Entertainment people about my flight, but I didn’t. It’s okay, because I did end up getting the autographs and making it to the airport early.

Rachel Luttrell was the first one I got an autograph from. She asked my name – because I didn’t get a post-it to write it on – and I told her. She asked if it was Stephanie with a “ph” and I nodded. I gave her my card and we talked for a brief moment about Wormhole Riders. She went back to writing my name and looked up to double-check my name. I said she could just write Steph if it was easier but she joked that she’d trek through and write my whole name. 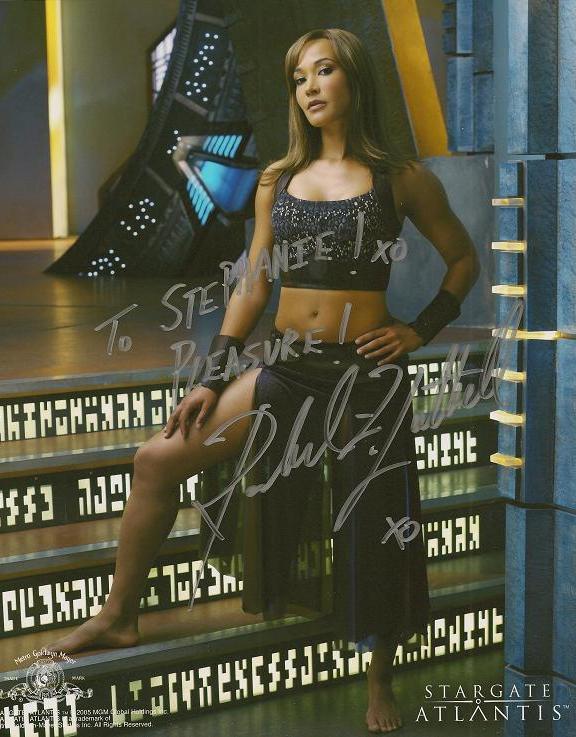 David Blue was next. As a joke, I asked him to sign my autograph to “ValaBlack” to make up for him never tweeting me. He said he reads every tweet he gets. I laughed that I’ve tweeted him a lot and he said I’d tweeted him earlier in the day. I nodded. He said if he knows a username, it means he reads all the tweets and he knew my username. Then he exclaimed he couldn’t that with 185,000 followers it’s hard to keep track. I laughed that I understood. He also signed an autograph for my best friend because she couldn’t be at the convention. He asked about her and said it was too bad she couldn’t come. By the way, his autograph read: “ValaBlack, I promise I read everything. But you intimidate me too much to talk.” 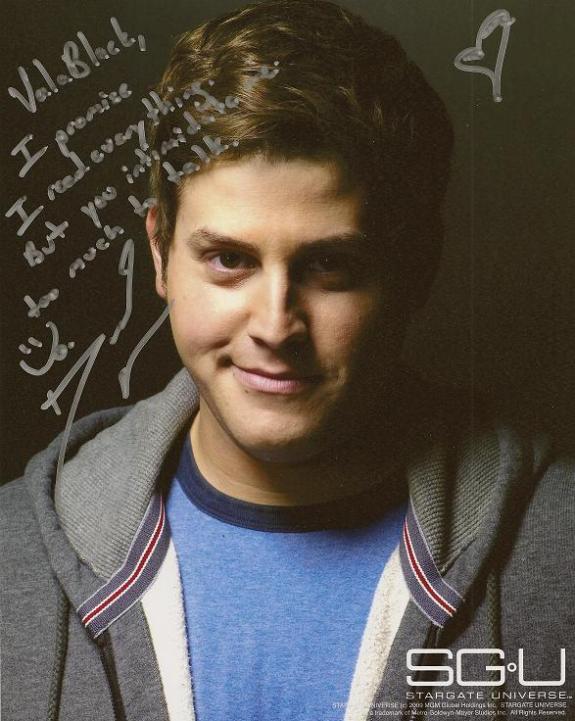 Actually, while I was talking with David, Elyse Levesque chimed in and told him to hurry up and sign – since she had nothing to do while she waited. He replied that he liked to take time and write personal notes and not just scribble down a generic signature. She replied that she leaves little gems (I can’t remember her exact words) in each autograph. It’s true, her message to me was, “Get in the gate!” Ha!

When I got up to Elyse, I handed her my card as well – yes, that was pretty much my thing for everyone. She was very enthusiastic and said she’d heard good things about us. She has such a great energy. I had been nervous about meeting her because she intimidated me, but now I’m not sure why that was. She’s incredibly nice and I’m also going to add that she is really gorgeous in person – even more than on television. We exchanged a few more personal words and then I had to run off. 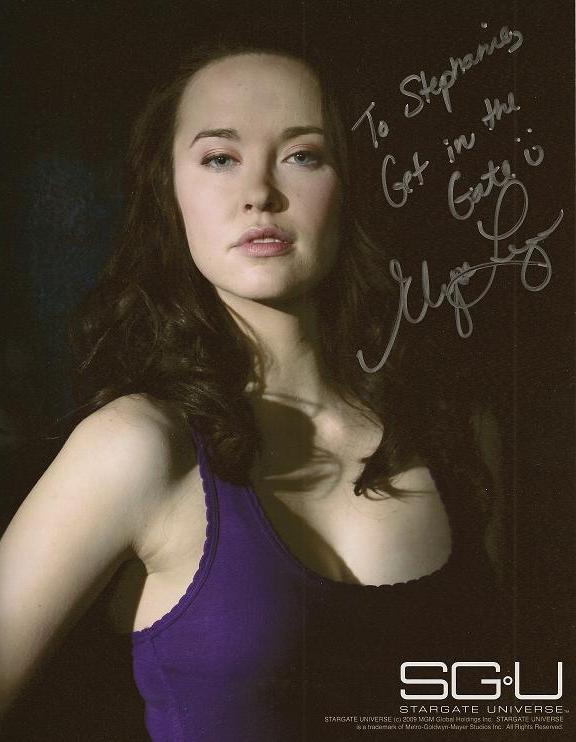 I said goodbye to all of the friends I could find before heading off to the airport. I’m so sad I had to leave all of them behind. It was great to meet so many new people! I hope to see some of them again soon. This weekend was fantastic. I’m st

ill a bit exhausted from it, but it was awesome meeting the celebrities, as well as making so many new friends. So, when’s the next con?

Sun Apr 25 , 2010
Heya science fiction convention fans, I continue my report on SciFi on the Rock held April 17-18, 2010 in St. John’s Newfoundland. After making my rounds through the vendors downstairs of the hotel, I came across another section set up of all sorts of cool SciFi toys and comics by […]