When I say today at Creation Entertainment’s Stargate 2010 was nuts, I mean it. Completely insane, wonko, off the rocker, downright crazy! Yep. I’m writing this report at about 1:40 AM and I just got in from the dessert party. I’m getting ahead of myself, so I’ll walk you through my day. I’ll try not to rush, but honestly, I do want to attempt to get some sleep before my insanely early morning tomorrow. Seriously, is 6:00 AM still considered a real time? It shouldn’t be.

My morning started with photo ops with Michael Shanks (pictured below). In case you didn’t figure this out, that’s a great way to start off a day. Bright blue eyes in the morning. Lexa Doig is a lucky lady! Of course, he’s a lucky man as well. The first time I saw him, he was coming out of a door I’d just moved from standing in front of the door.

All I could think was, “Well, if I was going to be hit by a door…” He smiled and said hello as he passed a few of us in the hall to enter the photo ops room. Anyway, he was really nice, as usual. He asked me how I was and I said good, then I asked him in return and he replied with the same. We got our photo taken and I left – all pretty standard. 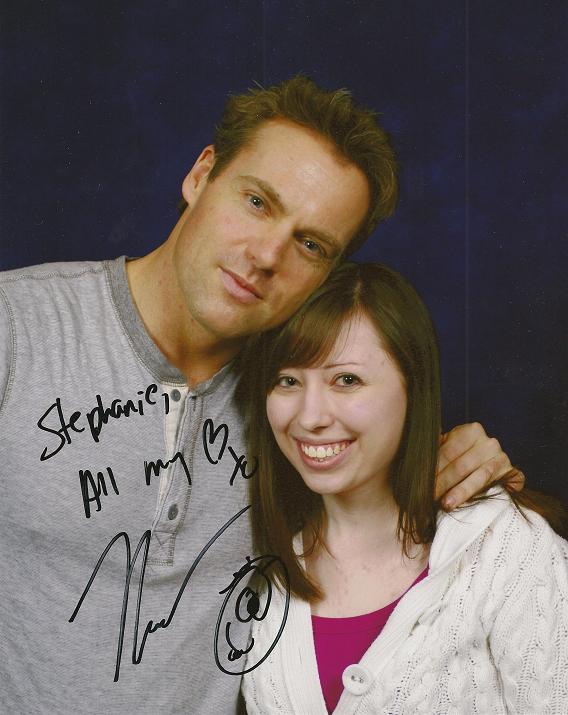 I met up with NaddyCat and we chatted with a few people in the main convention area while waiting for Michael Shanks’ panel to begin. As I said in my previous report, meeting fellow fans is one of my favorite parts of convention-going.

Finally it was time for the panel I’d been waiting most for. You don’t have to guess, since I wrote it in my last paragraph – plus anyone who knows me knows how much I love Shanks. I got in my seat and waited. He was definitely worth it. His panel was hilarious. He referred a lot to Stargate Universe and kept asking if people in the audience like it because he enjoys “stirring the pot” – and he made stirring motions with an evil grin each time he asked, as well. He also mentioned Lexa a bit and discussed his role on Smallville quite a lot as well. At one point, Lexa got involved in his panel via Twitter and it was quite hilarious. He was incredibly entertaining to watch – not that I ever doubted he would be. I’ve wanted to see him in a live panel for so long. Somehow YouTube just isn’t the same (although don’t get me wrong, I love everyone who posts panel videos for me to watch online). Below are a few of the WHR Shanks pictures taken VanCon! I will discuss his panel further in a future detailed report with lots of images of Michael Shanks. 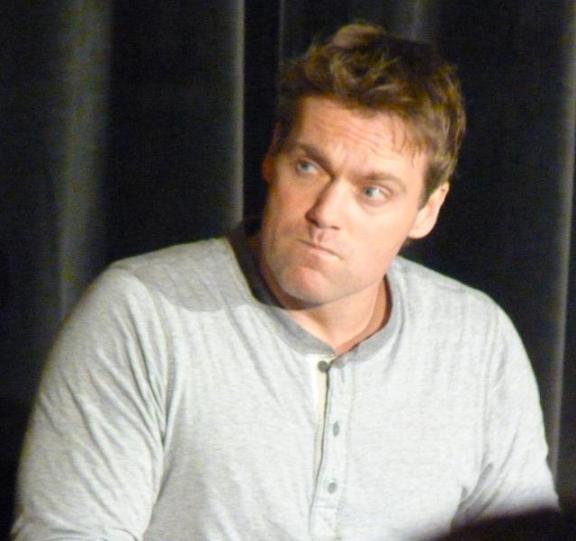 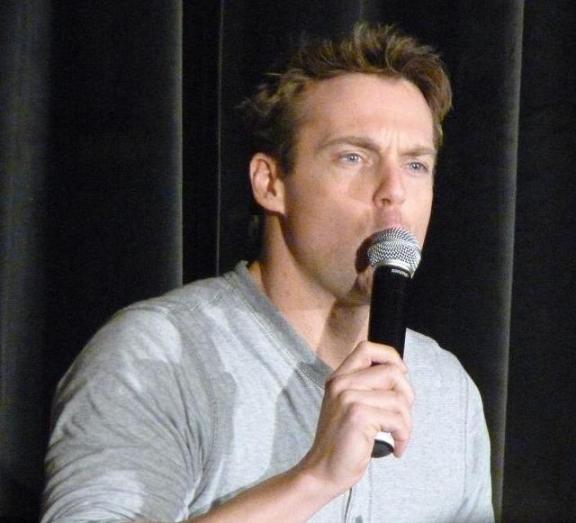 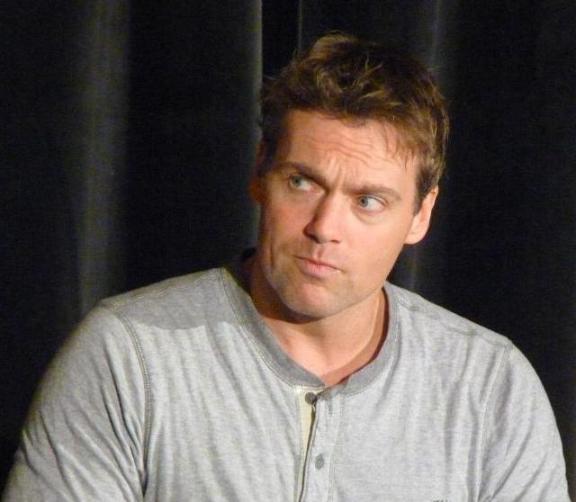 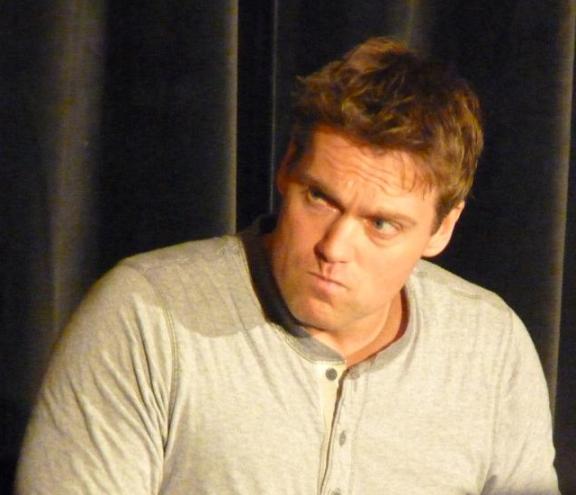 There was a bit of time after Shanks’ panel before I had to go down to get my photo ops with Joe Flanigan. I caught a bit of Steve Basic’s panel, which was rather entertaining, though I had to cut it short to go for my photos. 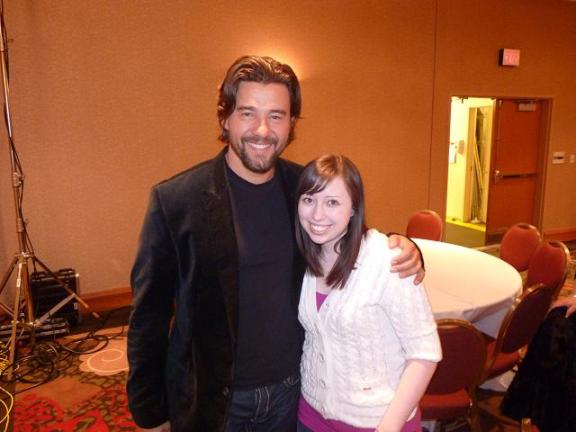 Joe Flanigan’s photo ops were, well, interesting. I waited in the huge line-up – though I suppose I shouldn’t complain because I was no where near as far back as some people – for awhile until finally I was at the door. Joe was in sight. And then? The camera broke. I have no idea what exactly went down with the camera, but Joe was up there talking with a girl who was supposed to be having her photo taken with him for a fair bit of time. Eventually we were all asked to leave the room and for the line to move back. I, being incapable of staying quiet for long periods of time, struck up a conversation with the woman in front of me in line. She entertained me until finally the line started moving again.

Finally, it was my turn. I can’t quite explain it but Joe gave me a weird look; good weird, though. We exchanged, “Hello! How are you?” pleasantries and when he went to put his arm around me, I asked if I could get a hug instead. He replied, “Of course!” and hugged me. For anyone wondering, he’s a good hugger. 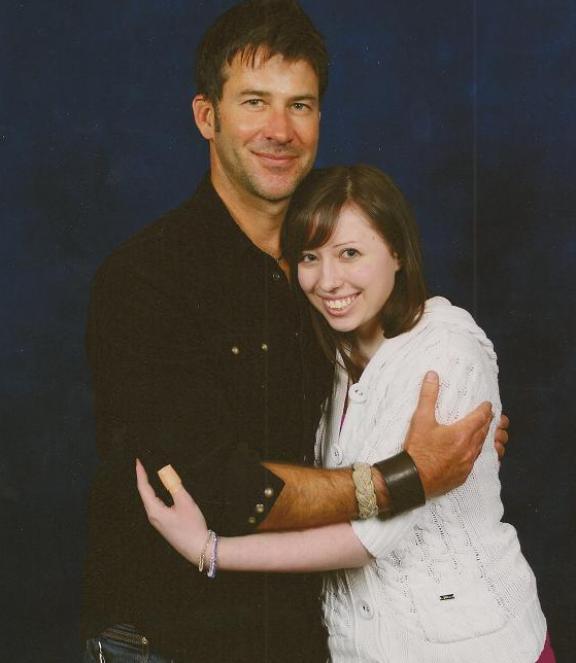 Due to the delay in Joe’s photo ops, once I was done, it was just about time for Christopher Heyerdahl’s panel. He talked a lot about prosthetic make-up and said he has gotten to know the make-up artists quite well since they torture him so often with paintbrushes covered in red-hot acid. He also mentioned that there is about a 99% chance of John returning to Sanctuary, which is very exciting! 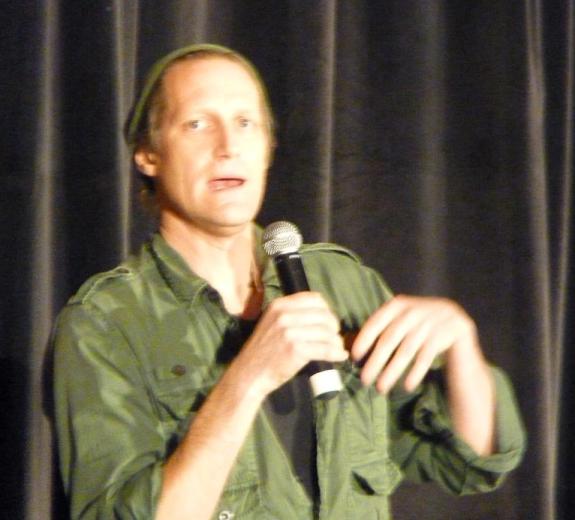 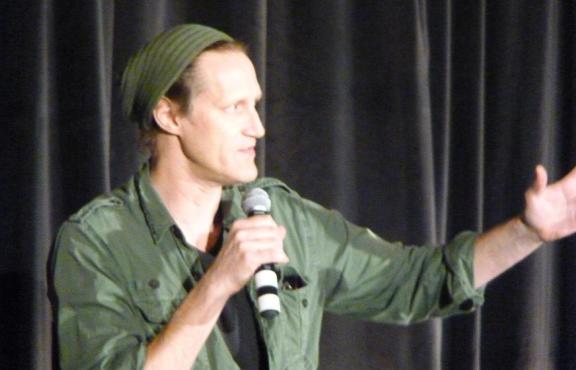 Once Chris was done, it came time for the now infamous panel – David Hewlett and Joe Flanigan. David did a bit of a solo panel for twenty minutes before Joe came out. He talked about his new nerdy obsessions – his newest being Final Cut Pro. The distinction between nerd, geek and dork was discussed, as he believed they were the same thing, but some members of the audience were adamant they are different concepts. Someone suggested a chart, to which David replied that if they have a chart, they are most definitely all three. 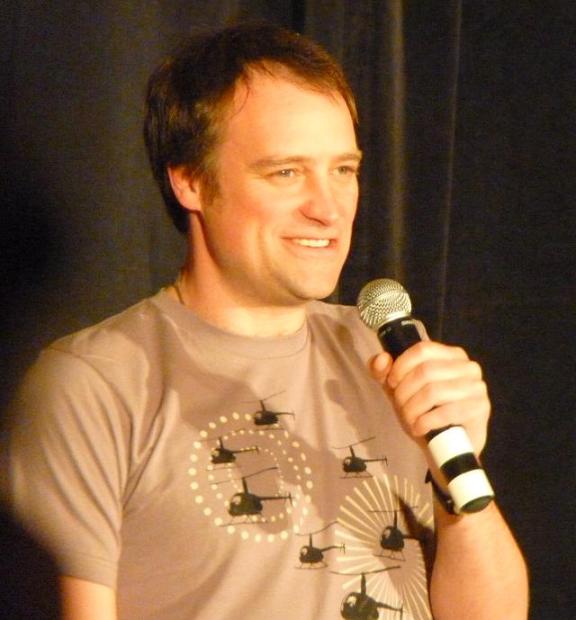 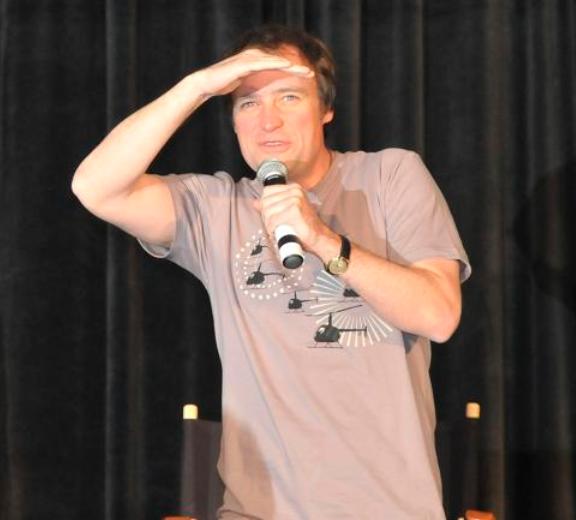 Joe peeked his head out from behind the curtain and came out on stage. They interacted for a bit before someone on a microphone asked David to give Joe his twenty minutes. He reluctantly left the stage and Joe talked with us for a bit. 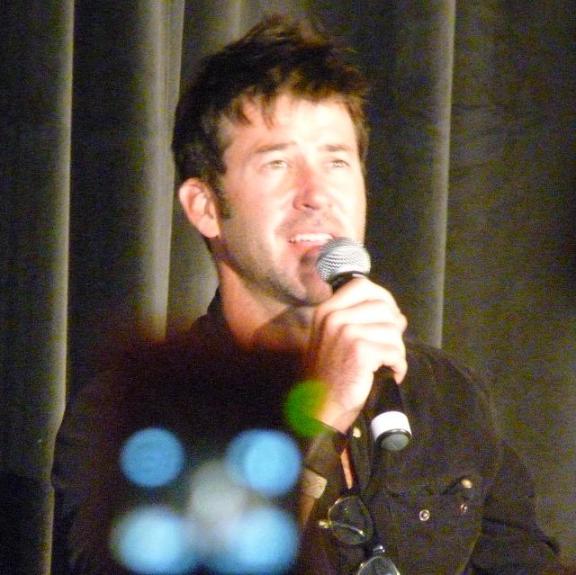 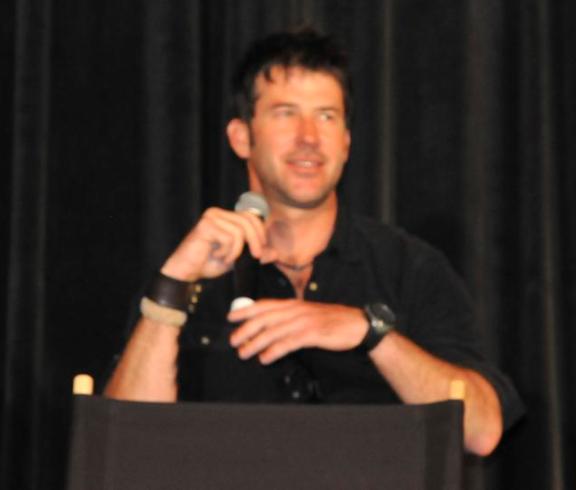 Every few minutes, though, David would pop his head out and ask if it had been twenty minutes yet. Eventually he just came out on stage to stay – though I’m pretty sure the full twenty minutes had not yet elapsed.

Thus began possibly the most entertaining time of my life. The way they interacted was hilarious. David is incredibly funny and Joe went along with all of his jokes. They talked about pranks that were pulled on-set, Jason Mamoa, dynamics of the cast, etc. They also referred to how their photos on the season five DVDs made them look constipated. David said he’d never seen so many chins and added, “Saving the universe…one calorie at a time!” Just like with Shanks, I will explore Joe and David’s panel in greater detail in a later report. 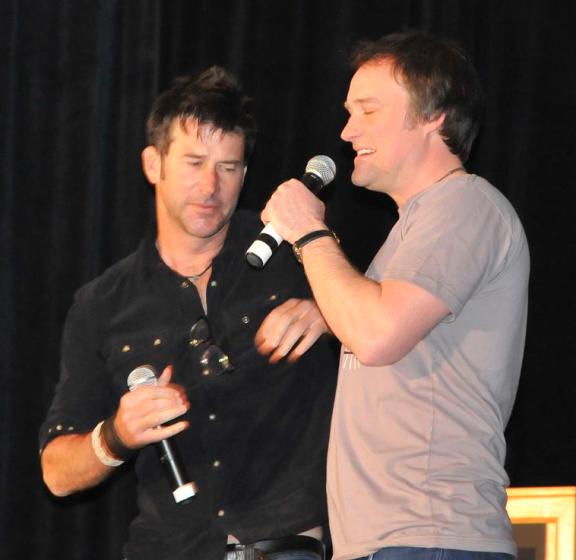 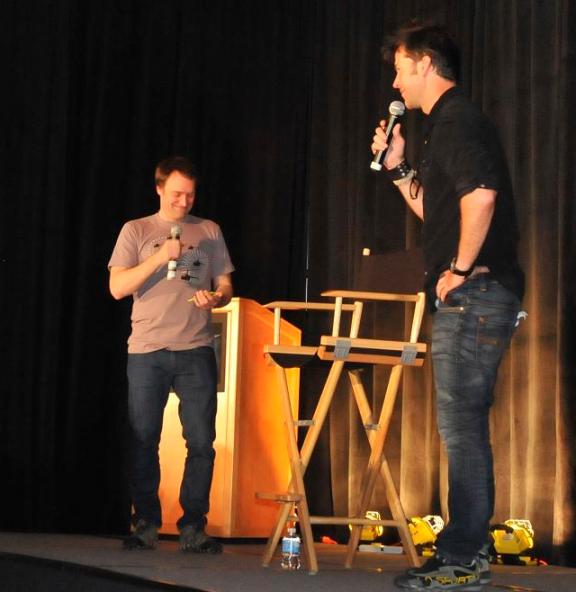 Immediately after, I ran downstairs, as I had tickets for a combined photo with David and Joe. Thankfully the camera was not broken this time, so the line moved fairly quickly. While I was waiting near the beginning of the line, David broke out into a dance to the hip hop music that was playing. They snapped a photo with a fan, then David started dancing again. By the third time around, Joe joined him. Sadly they stopped a couple people before I got there. I think they should take their dance act to YouTube. That was great! I love seeing moments like that! 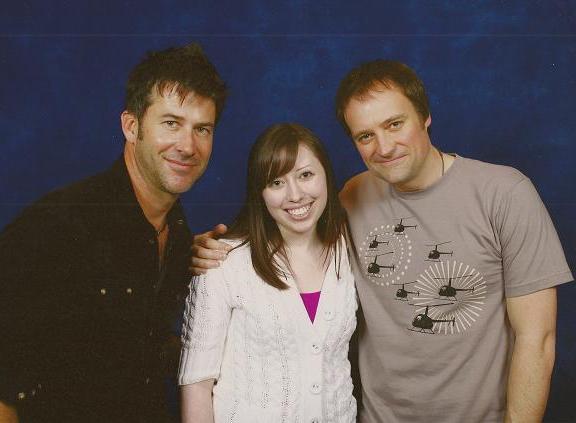 It was at this point that I realized that besides a few nuts NaddyCat had given me, I hadn’t eaten since last night. I had few minutes before it was time for autographs, so I bolted up to my room and grabbed a slice of pizza. I went back down to stand in line for Joe, Michael and David’s autographs. I should rephrase that, since most of the waiting was done while sitting, as they called by rows and I’m in row G.

Once again, I chatted with a few people around me. I ran out for a moment to get something from my hotel room and noticed that the photos for Michael Shanks’ ops were out. I found mine and brought it back with me. I ended up getting it signed.

I noticed when I got close to the line for Michael and Joe’s autographs, Shanks had the game on the radio. He kept glaring over at it and sighing angrily. The Canucks weren’t doing too well anymore in that game. Joe asked about it a couple of times and Shanks replied with a bitter comment that it wasn’t looking good. 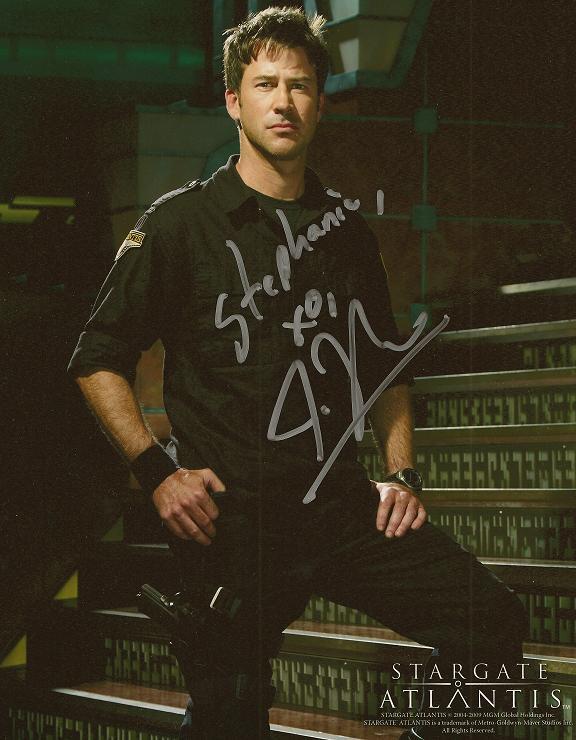 I had two tickets for Joe Flanigan’s autograph, since my aunt is a big fan and couldn’t get to Vancouver for the convention. I also gave him my WormholeRiders card and told him about the site for a moment. He smiled and said, “Oh, cool!” and asked what kind of stuff we do. I briefly told him and thanked him before moving on, since I knew people were waiting behind me. I gave Michael my card as well and we talked a bit, but I’m pretty sure he was a bit distracted by the game.

David Hewlett had a completely separate line, so I had to go stand in that one and wait for him. I talked with two of my new friends, though, so they kept me entertained. When I was second in line, David looked at his watch and realized it was ten to nine and he was supposed to be off at nine, but he still had a ton of autographs left to sign. He said he had a mini-panic attack and would have to call his wife soon, though I don’t know if or when he did that.

When I approached him, David laughed about panicking. I gave him my card as well and we talked for a couple minutes about it. He was interested in knowing exactly what we do and he seemed enthusiastic about it. It was really nice talking to him, but once again, I couldn’t hold up the line, so I had to move along. 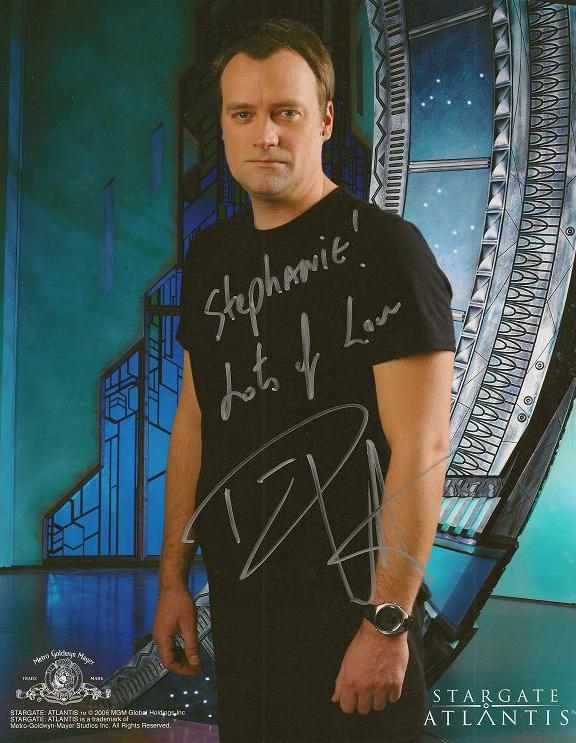 We had a huge break in between autographs and the dessert party. I went to dinner with two friends I’d been chatting with in the autograph line. This is where we saw the Canucks lose the game. I think I was the only one who cared. I could practically feel Shanks’ annoyance.

Finally, the last event of the night was the dessert party. I met a bunch of new people there and they were all really great company. It was awesome talking with everyone about the con and about other stuff outside of Stargate, as well. Colin Cunningham demonstrated his trick from last night’s cabaret again because there was speculation it was rigged due to shadows from the spotlight. He proved them wrong by bringing Brianna and the other volunteers back up to show us it was real. It was rather impressive. 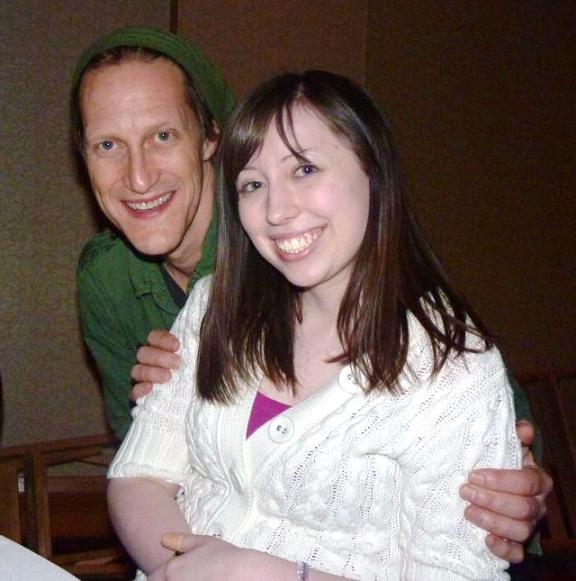 The celebrities made the rounds. We talked a bit with Steve Basic and Chris Heyerdahl. I also got a picture with each of them at the end of the night. We all had to leave because the party was over, but some of us fans chatted for a bit in the hall. It wasn’t long, though, before we all decided to head up to our rooms because we have early mornings tomorrow.

I’m not kidding. If I get more than an hour of sleep at this point, it will be a miracle. The price we pay for fun… Th

is convention may drive me to a caffeine habit! Oh well, it’s worth it to meet so many awesome people! Stay tuned for more craziness tomorrow – the last day!

Wed Apr 21 , 2010
This is just a short report to get you hooked and interested into my little section of the science fiction convention world known as SciFi on the Rock! One of the nicest things about this convention is the intimate nature of the event. On Sunday April 18, 2010 I attended […]