Last week I was given the opportunity to visit Bridge Studios – home of the Stargates. Right now production of the newest addition to the franchise, Stargate Universe, is in full swing for the beginning of season 2. 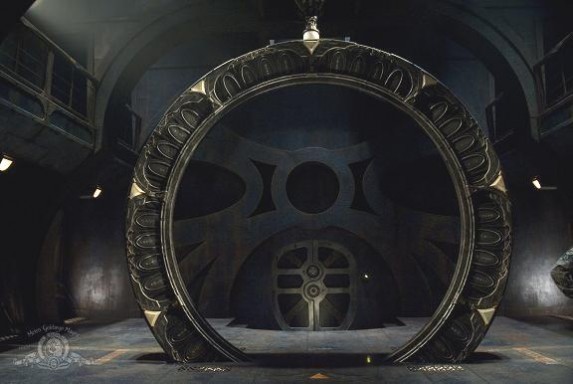 When I first got to the Studios, I was met by the Unit Publicist for SGU at Bridge Studios known as “The Bridge” for Stargate, and we had a quick walk around the grounds. As you may be aware, Bridge Studios derives its name from the fact that it used to be a facility for building bridges. The biggest stage building, which housed various SG-1 and Atlantis sets, used to have train tracks running through it so that the bridge pieces could be loaded directly onto them after being built. I also found out that they actually built parts of the Golden Gate Bridge there. 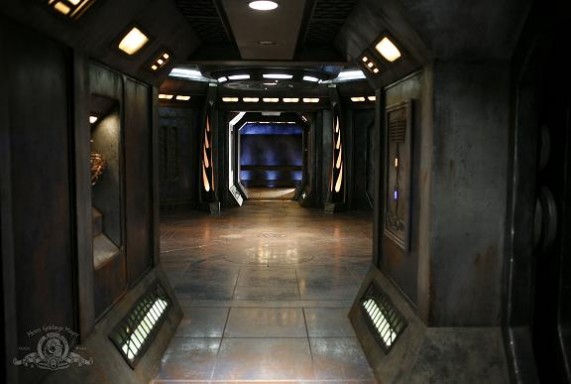 Our first stop of the tour was to the set of Destiny which, as you know, is where a large part of the show takes place. My first impression of the set was that it was simultaneously smaller and bigger than I had expected. This may sound odd, but I can explain: given the sprawling feel I sometimes get from watching the show, I was surprised that the stage itself was smaller than I had expected. On the other hand, when we walked through the hallways of ‘Destiny’, it feels spacious. The Gate room in particular, with its vaulted ceiling, really does almost feel like being in the belly of a space ship. 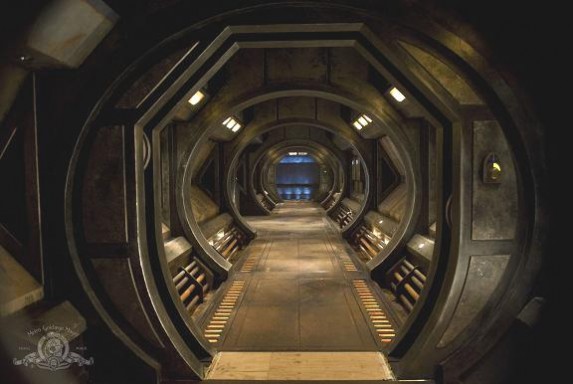 One aspect I found quite neat is that every single room and hallway on the set doubles as multiple others. Space is expensive anywhere, and on the set of Destiny, they take advantage of some rather clever construction in order to maximize what is available. For example, in the hallway pictured above, the panels on the walls can be slid up and down, and there are multiple panels available. The pieces where the walls meet the floors, similar to baseboards in a house, can also be switched around. Various combinations of these allow for completely different looks in the hallways and, combined with different lighting, you would never guess – well, now you might – that different scenes were shot in the same hallway. 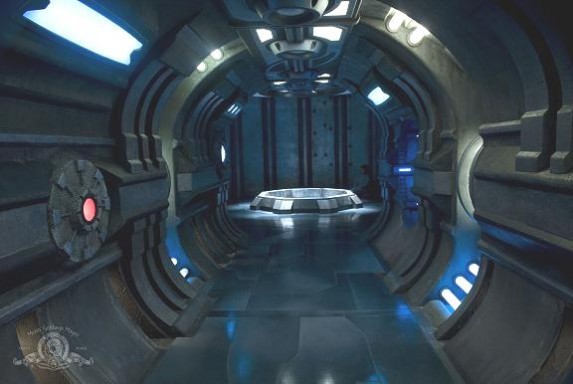 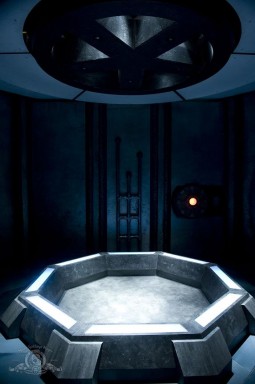 As I’ve mentioned, just as the hallways are inter-convertible, so too are the rooms of the set. For example, the two images above show a long view (above) and a close-up (on the right) of a room which ought to look familiar: it is the location of the APLCR unit. Affectionately referred to as the “apple core” (if you haven’t seen that kino, you can watch it here http://stargate.mgm.com/view/content/1896/index.html – with David Blue, Peter Kelamis, Patrick Gilmore, and Jennifer Spence), the control interface unit usually sits in that octagonal shape in the ground – it descends from the ceiling. When I visited the set, the unit was up rather than down as we often see it in the show, and I got to go take a look at it on the top of the set. It is a rather intriguing piece of work, and looks just as neat up close as it does in the episodes. 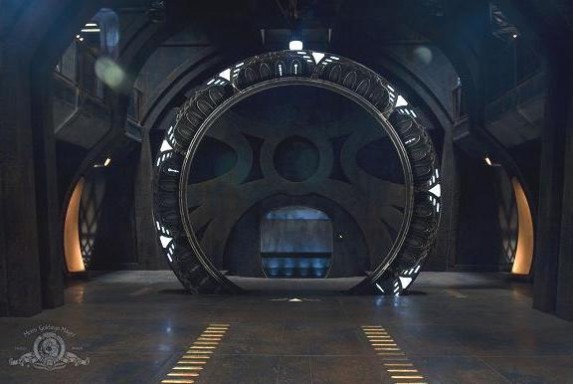 When I visited the set, I did get to see the Gate – however, the Gate room was set up as a cargo hold. How is this done, you ask? Well, if you look in the picture above, to the far right and left you can see structures sticking out of the walls a bit; there is a massive door which comes down out of the ceiling to cordon off the gate and, voila! A cargo hold out of the Gate room. 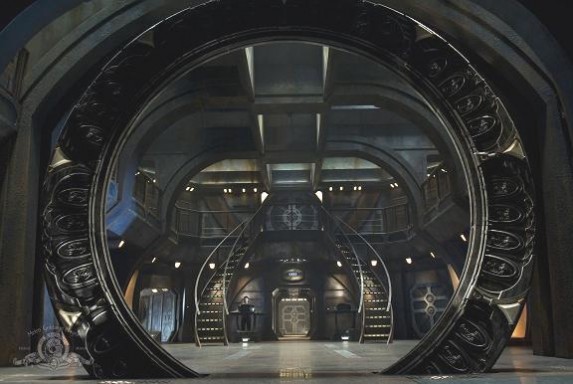 Here is another picture where you can see how the door would come down to close off the Gate. Something which is also rather neat is that those big curved stairs which you can see and the control consoles underneath them also get moved to create the various other rooms. The head of Bridge Publicity  took me in behind the big door so that I could take a look at the Gate up close, and it is huge, with an incredibly powerful engine to turn the Gate.

Mark Savela, the Visual Effects Supervisor for SGU, joined us while we were looking at the Gate, and he showed me around the sets for a while longer, going into some more detail on several of the rooms. We looked at Eli’s room – the Kino room – which is pretty tiny, and at one of the bedrooms – at least, the bedroom was set up as such at the time. However, like every other room, it has multiple uses – one of which is as the Observation Room. One of the walls of the room lifts up – much like the big door in the Gate room – to give the look of the big observation deck out of which we often see the crew of Destiny looking (recall that space battle in “Space”). 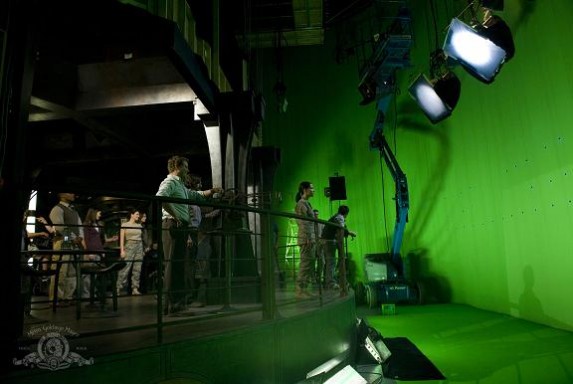 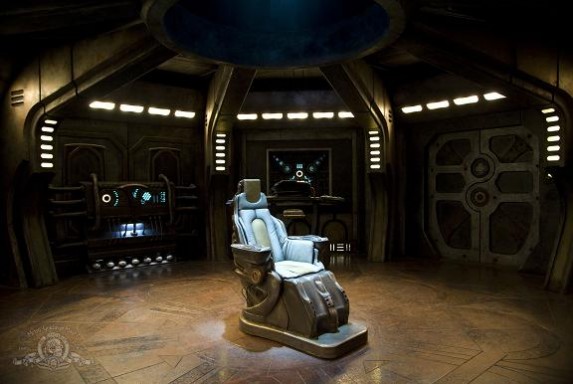 Something else which becomes readily apparent while physically examining the sets of Destiny is the phenomenal amount of detail which has gone in to creating the sets. Mark mentioned something which I found interesting: the floors of Destiny were actually created separately, with texture and grooving and detail. Often, the flooring of sets is just the floor of the stage having been painted, but not for the Destiny. You can see some of the detail under the chair interface in the picture above; actually, now that I’ve mentioned it, if you look at the pictures of all the hallways and the Gate room, it becomes even more readily apparent. 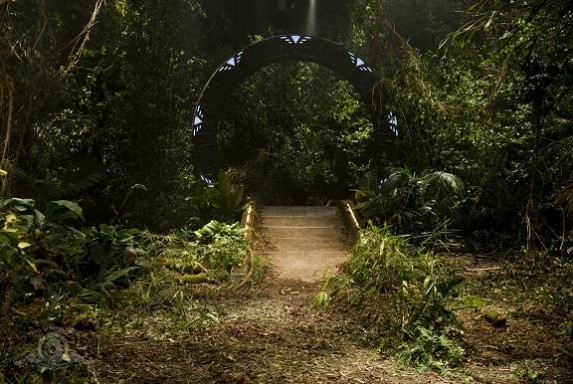 After touring one of the Destiny stages, Mark took me to the production offices to meet some of the visual effects gurus who work on Stargate Universe – the unsung heroes behind every episode.

The first person I met was Jennifer, who works on post-production of SGU. We briefly discussed colour correction and sound mixing, which help contribute to the overall quality of the final product. To my admittedly minimal understanding, colour corrections involve manipulating the colours of the scenes so that the finished episode looks natural and well-balanced. Sound mixing, on the other hand, involves tweaking the various sounds, usually a mix of speech, ambient noise, sound effects, and music. The post-production for SGU is done in-house where they do all their own dailies and transfers, and it became a facility at Bridge Studios during season 4 of Atlantis.

One aspect of production which has always fascinated me is the process of taking all these disparate pieces and pulling them together to make the final product which we, the viewers, see on television. The people I met play an integral part in that process and were more than happy to explain some of their work to me. 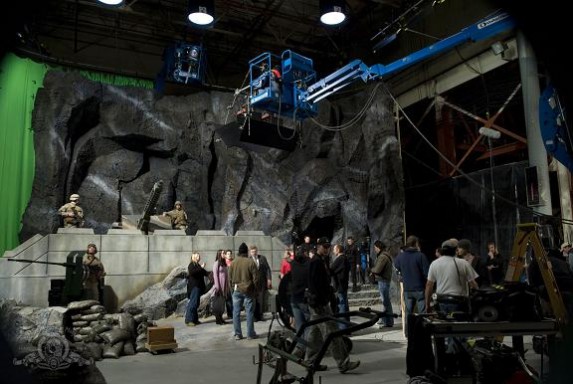 I spent the longest with the 3D department, but I also met the Playback department – they create pretty much all the images that we see on screens within the episodes; most obviously, the big display on the bridge of Destiny. I also met some of the people who work on one of the last stages in the process, which include work on some of the fantastic vistas we see out of the Observation Deck as well as the look of FTL (Faster Than Light). It never ceases to amaze me, how much can be done with computers: every time green screens are used in filming, this department is responsible for making it look like somewhere else entirely. 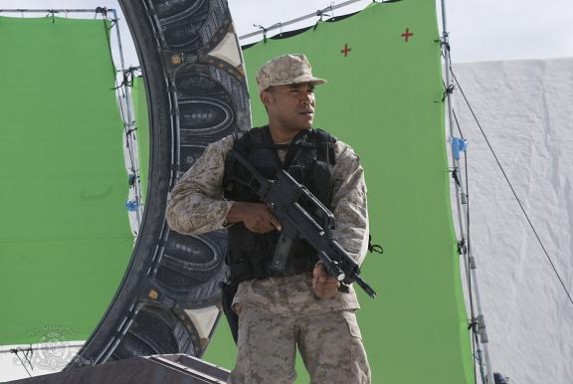 Our next stop was to the 3D department where I got to sit down and chat with 3 of the guys who work on creating, well, the name rather speaks for itself: they create 3D computer-generated objects for the episodes, extend backgrounds, and just generally make things seamless – to name but a few aspects of their job. They are the ones responsible for bringing to life the visions and ideas of the writers and producers.

For example, one of them showed me some of the early models for Destiny itself, and explained some of the difficulties inherent in using an entirely computer-generated ship. One of the problems is that it is all well and good to create a ship that looks incredible from further out, but unlike with a physical model, you cannot simply “zoom in” on the ship when you want a closer shot – the computers cannot handle that kind of processing. Another issue is whether the image of the ship from afar will actually hold up to closer scrutiny; whether the ship will still look impressive from a closer view, or even from standing on the hull of the ship. A balance must be found between the resolution of the ship, and something that won’t be too difficult to actually execute. 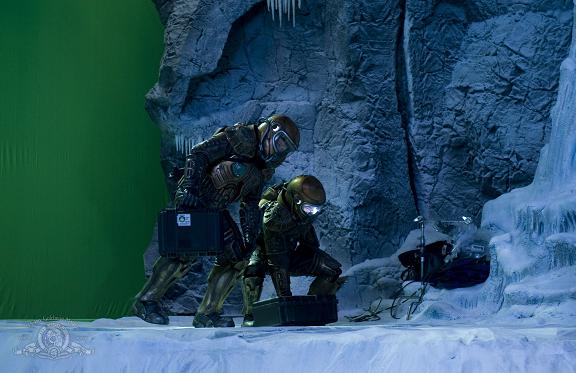 Jamie animated the battle sequences in ‘Space’, and described how the process very much involves a team effort, and an amalgamation of numerous sequences which are tied together to give us the final episode. He mentioned that one of the great things about SGU is that, relative to some other shows, they are allowed quite a bit of time to work on the sequences, which helps with the final quality of the episode.

I got to see a short sequence from an upcoming episode (hence the reason for my vagueness) for which one of them basically had to become an engineer – building something up from constituent pieces while simultaneously keeping the big picture in mind. I find this kind of process very intriguing: you are working within a virtual environment, but must also take into account the physical laws which govern our universe to keep an entirely novel artifact as close to reality as possible. Needless to say, if this is representative of what we will soon see on Stargate Universe , I cannot wait for the episodes to air.

I want to express my gratitude and that of the team at WormholeRiders News Agency’s to Mark Savela and the Unit Publicist  for SGU showing me around the set, to MGM Studios who provided the pictures and organized my visit, and to the post-production geniuses who were kind enough to take time out of their busy days to talk with me.

If you want to chat come check out my Twitter page (click on the picture to follow the link), or feel free to email me at the link below: 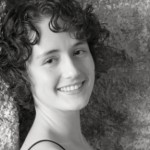 5 thoughts on “WHR visits “The Bridge” courtesy of MGM Studios”

Mon Apr 12 , 2010
New Breaking News UPDATE April 14, 2010 7:00 PM Pacific Time Genevieve Buechner: WHR has confirmed with her contacts that ‘Tamara Adama”of Caprica will “Crash” the Auroris Fan Party this evening and she has our total support in that regard! Another outstanding actress Ms. Buechner is also known for her […]