I must admit, I am one of the many people who will be watching V The New Series without having experienced the original. Indeed, I wasn’t even born yet! The plot of V, however, is as timeless as the idea that there is life out there beyond our little solar system. If that idea intrigues you as it does so many, you will enjoy this new show. 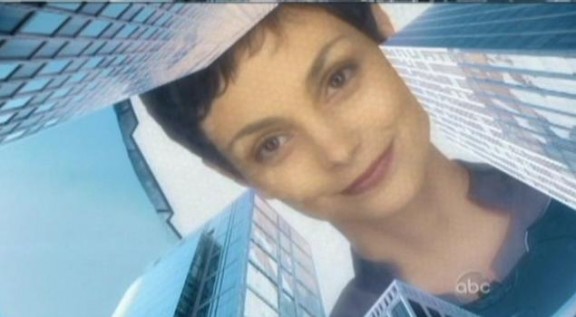 I was impressed by how quickly the plot is moving. I’m not sure what I was expecting, but I was pleasantly surprised. I’ve always loved stories that have two sides unfolding concurrently. The writers of V have done very impressively so far in this regard, telling what could be seen as three completely different stories and then showing you how they connect.

I was very pleased with the quality of the CGI. You learn that within the mother ships is a veritable city, and it’s beautiful. It’s hard to believe, seeing the beauty of both the V’s ship and the V themselves, that anything sinister could be hiding beneath the surface.

WR_Systems has done an excellent job profiling the cast for you, so allow me to just comment on the faces that struck me as familiar, and no doubt other Stargate fans will recognize them as well. 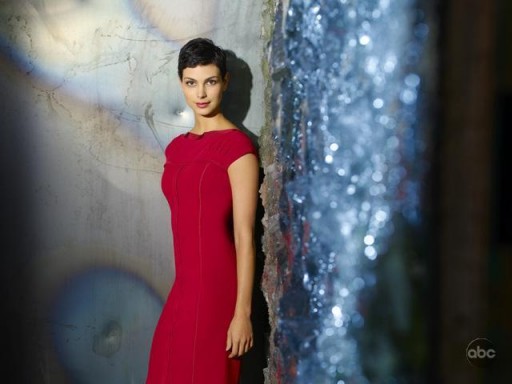 Morena Baccarin’s performance reminded me in every way of Adria the Orici. Her character Anna is the leader of her people, the apparent founder of their movement and designs on Earth. The cadence of her speech and her bearing scream of the power she knows she has. Remember how Adria said to Daniel, “We have plans for you” and all you could think was, ‘Oh no!’ Anna delivers an eerily similar line. Both characters have a way of getting under your skin. You know she is not being honest with you to say the least, but despite her graceful appearance of queenly fragility, you know she could probably kill you before you could blink. Yeah. Look out world. She’s back. 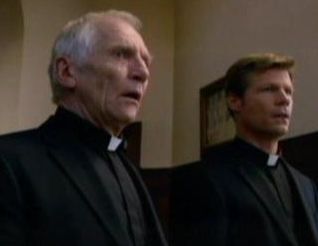 Watching this, two other familiar faces jumped out at me. Remember Doctor Timothy Harlow from Stargate SG-1’s ‘Bane’? Actor Scott Hylands hasn’t changed all that much, and you can see him on V as Father Travis. 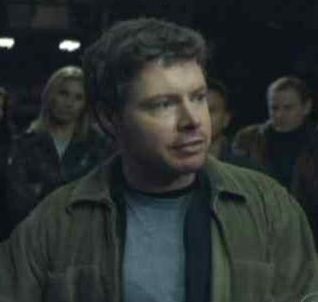 Then, remember the Jaffa commander from ‘Orpheus’? The guy who coined the phrase, ‘If you do not work, you will die”? If you look closely and picture him with blond hair and one truly wicked eye, you’ll see that Georgie Sutton on V is in fact actor David Richmond-Peck!

Then there is Elizabeth Mitchell, who I recognize from LOST. I’m a casual fan of LOST – unless you count when I start yelling ‘Don’t touch that you idiot!’ at the TV – and after Juliet’s untimely demise on LOST it was fun to see the actress in a different role, though 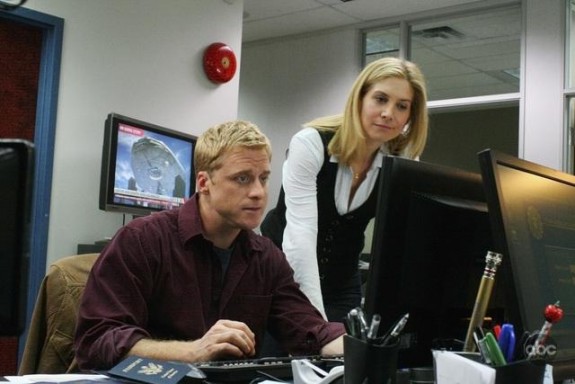 she as just as much of a tough cookie here as there. A single mom of a 17 year old boy, Erica Evans will be right in the thick of the action in this series.

Even without having seen more of the Firefly series than Serenity, I recognized Wash, played by Alan Tudyk. He is actually one of my friends’ favorite character from that show, so when I saw him as FBI Agent Dale Maddox, I expected great things of him. I can’t really compare the characters, but I can honestly say that I felt he could be trusted just as well as Erica, his partner, felt she could trust him. Hmm. Too Bad.

I became curious enough through seeing trailers to be interested in watching the pilot. After having seen the pilot, I think I very well may be hooked. Between the familiar faces and choices in the amazing cinematography that caught my eye, I’ll be back for more.

By the way, if the last shot doesn’t look eerily familiar to Stargate SG-1 fans, it should, and the implication, I’m sure, is intentional!

One thought on “V The New Series has Familiar Aspects”

Wed Nov 4 , 2009
Hey Stargate Fans! Wonder what we were up to when we said fun? We will soon randomly select a winner! Win what? You could win an autographed picture of your favorite Stargate star from the Official Los Angeles Stargate 2009 Con that’s what! Here’s how: This is rev 2 of […]