f the twenty-first century such topics become more important as we see many giants of the traditional news and magazine industry fall by the wayside during these tough and uncompromising economic times! Accompanying me on my journey into the world of Alternative Press was a native San Franciscan, an old newspaperman himself, my dear 83 year old father! 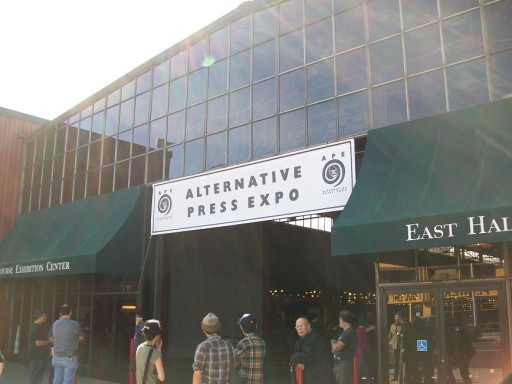 Known as “Mr. Newspaper” in our family (because he religiously reads the papers eve ry day and there are stacks of them everywhere in his house), Dad was also interested in the concept of Alternative Press. For Dad the news is either in print or it simply does not exist! The only analog today would be the electronic content our generation has on hand held computers, PDA’s, cell phones and other mobile computing devices.

No matter what anyone says about Alternative Press, the comics and stories are almost always available in print and that is a very good thing as far as traditionalists and people from my father’s generation are concerned. Dad was quite happy about the n 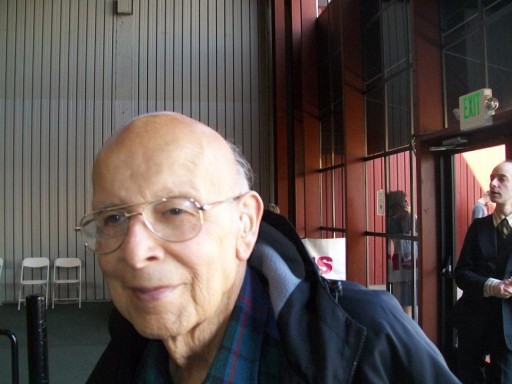 Press because comics were basically epic to his youth! To young people in the 1920’s and 1930’s, comics were of the same social impact as radio and going to the movies!

To say Dad is a newspaper person is being truthful … in a sense. But saying so may also be a bit of an exaggeration. You see, it all depends on how you think about newspaper “people”. In Dad’s case, he actually sold newspapers like The San Francisco Chronicle and San Francisco Examiner on street corners during the Great Depression!

According to Dad, The Depression was a time when a newsboy had to “fight” for their turf and sometimes for their very survival. Dad tells stories about the fights he often had to get the best corners in San Francisco to sell his newspapers. We drove past several of these street corners on our way to the convention which brought back vivid memories. You see way back in the early 1930’s, a newspaper sold for just five (5) cents, and he got to keep 1 cent for each paper he sold. That was very good money in those days considering a loaf of bread was two cents, and even less, only 1 cent if it was day old!

Getting back to our current Alternative Press Exposition reality! My former career often kept me overseas

or out of state most of the time over the past 25 years. Even though I was raised and have lived in the Bay Area a good part of my life, I realized when I drove into San Francisco that it had been over 15 years since I had visited “The City” and it’s famous downtown area! Much had changed including the very look and feel of the entire historic waterfront and even the world fa

mous Fisherman’s Wharf, now a tourist trap compared to the past, when simple pleasures and elegance existed. Ah, for the simple splendor of days gone by! 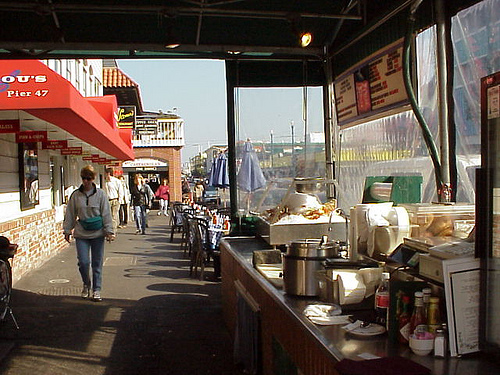 From end to end the Waterfront is now filled with condominiums, nice little community parks, and ever wider and longer tourist promenades! All in all what the City of San Francisco has done is rather pleasant, but compared to my memories of the working on the Waterfront 35 years ago, then a bustling shipping and freight center, it was almost like being in a totally new city for the very first time. If it was not for the towering Bay Bridge just overhead, and the Golden Gate Bridge off in the distance, I might have been in any urban environment that has been renovated from a formerly blighted condition. This is no longer the case!

The Alternative Press Expo, or APE for short, was a two day event held at The Concourse, on October 17 & 18, 2009. Price of admission was very reasonable by current standards. Admission price was $10 for one 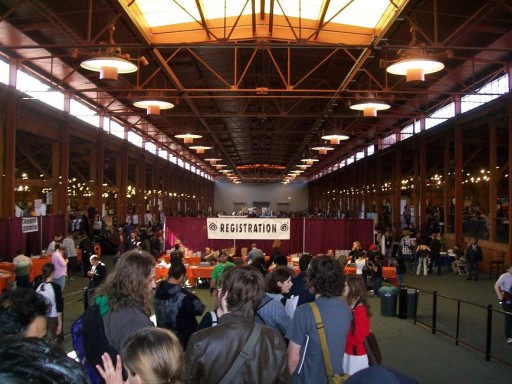 day admission, and $15 for a two day convention pass. And what an event it was! Complete with costumed visitors and thousands of attendees, it was a very nice place to see and hear (in person) some very creative people!
The Concourse, located in what was formerly an industrial area known locally as the ‘South of Market’ district, is not far from the historic Hunters Point Naval Shipyard that helped the United States win the Second World War. The Concourse is also not far from downtown San Francisco, walking distance being only about six city blocks away. The entire building has been completely renovated by the owners from an old industrial warehouse into a modern convention/event center. The Concourse facility itself is huge. It 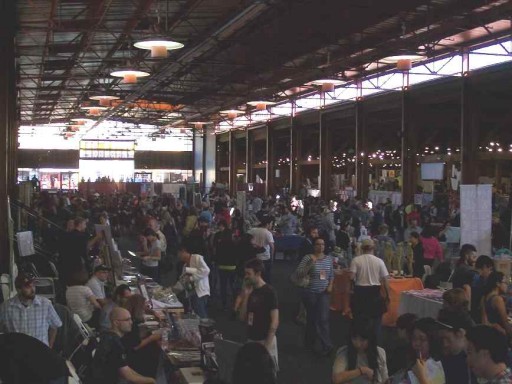 measures more than two football fields in length (~600 feet), and is nearly a football field wide (~275 feet)! It made for an airy open event that was obviously being enjoyed by the attendees and vendors alike!

The Alternative Press Exposition (APE) was brought to the citizens of the San Francisco Bay Area this year once again by the great people from Comic-Con International! Yep, that’s right folks, the very same people from San Diego who hold numerous events at various locations including the upcoming Wonder Con in April 2010 in San Francisco and the famed Comic-Con International scheduled for July 2010 in San Diego!

The meaning of the term Alternative Press covers a very wide range; from real world news, critique and parody, to the obscure, fascinating and sometimes even the bizarre. Being this was my first visit to an APE convention, I wanted to take in the local flavor of the event and all of its unique offerings. I was not disappointed. The Alternative Press Expo is a bit different than other Comic-Con events. Unlike the sprawling WonderCon or San Diego Comic-Con, AP 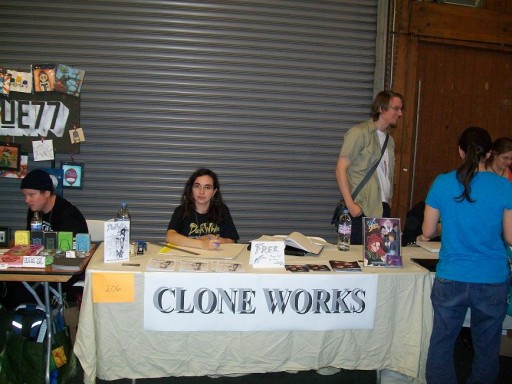 E’s being a little smaller, made for a more intimate experience. The people were friendly, the panels entertaining and educational, and the environment well organized by any standard. What makes APE nice is that it is really more of a vendors and publicist event where the fans of Alternative Press, (who love the blended form of comics, news parody, art, fantastic story-boards, alternative sculpture, and now a newer field, digital animation) can interact directly with the creators of alternate forms of news, political satire, and artistic expression. It was a sight to see! 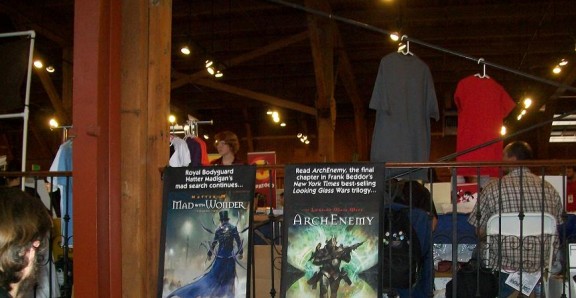 Much to the delight of many fans of Alternative Press, the weekend convention festivities did not end with panels, products and vendors! Although not sponsored directly by Comic-Con, the Comic-Con Program Book did highlight several of Saturday evening’s smaller, more intimate gatherings throughout San Francisco. Held as a number of after-hour events, the fun included the very popular Cartoon Art Museum Party, the APE Aftermath at the Isotope Comic Book Lounge, and the Catch Your Death Opening Reception at the Double Punch Gallery which according to surces ran “late”… very late! We were “good boys” and unfortunately went home long before the parties began.  Perhaps next year? 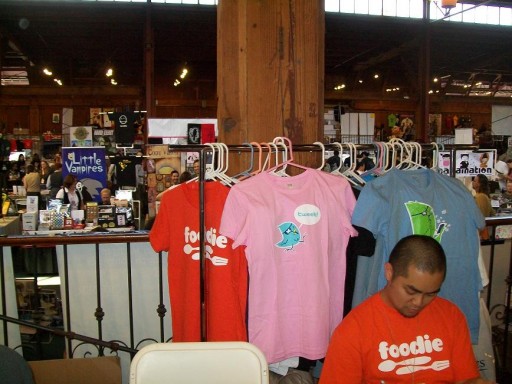 on s tudios that have taken Alternative Press into the digital age. Notable among the high tech offerings was A lan Lau’s GhostBot (www.ghostbot.com) featured in the news video above. We were fortunate enough to receive a DVD of their work. All I can say is GhostBot produces crisp, clean output and is very good at what they do. Nice job GhostBot!

During our many hours spent at the exposition it was clear that retail sales appeared slug gish, dragged down due to the economy. There were many high quality offerings available to the public including books, posters, T-shirts, paintings, 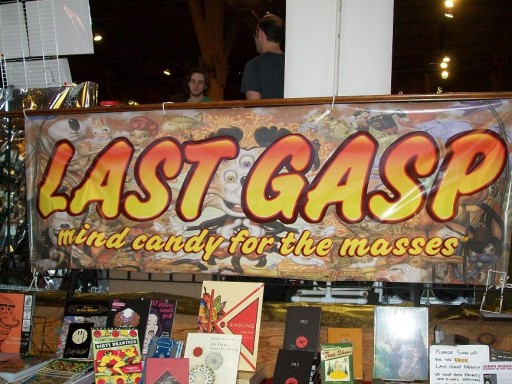 sculptures, massive amounts of bookshelf items and other bric-a-brac. Unfortunately, in vendor table after table that I visited, I noticed that sales appeared much slower than many of the vendors and exhibitors would have liked. Even though tempted by many items, I too was forced to forgo purchases due to the tough times many of us are facing in today’s economy.

There was one item that caught my interest and nearly sent me into bankruptcy! The item was a beautifully hand carved, multi-layered wooden pyramid sculpture. It looked like a stage prop that came right out of the Ori Saga on Stargate SG-1! 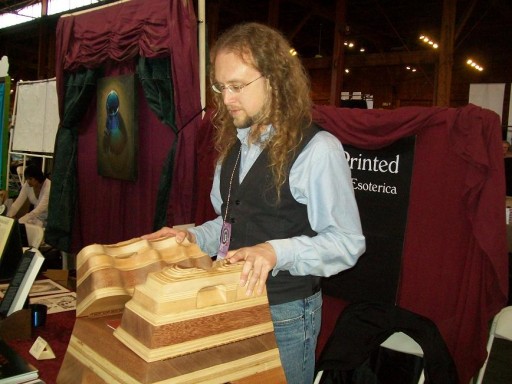 A display prop for a company that produces fantastic paper models, (Museum of Lost Wonder), the pyramid was not marked for for sale. I joked with the owner and offered $2,500 and he said (amidst the noise and din of the crowd) that “we could work something out”. If I had an extra $2,500 I might have walked out of the expo with the fantastically enchanting pyramid, and gone hungry for weeks! What made the item so cool was that it was very large with a 36 inch base and the top of the pyramid had a secret cavity for hiding things of value! The top half of the pyramid actually opened (flipped open like a book on dual hinges). Inside was a fine leather bound book that I could have sworn 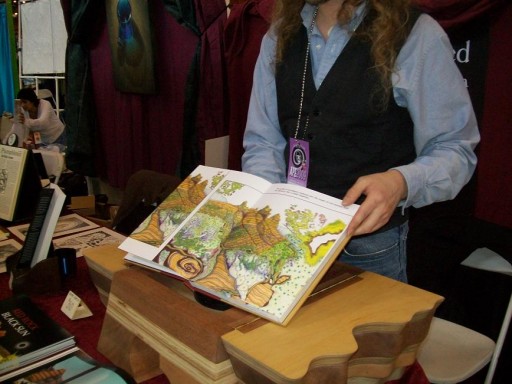 said “The Book of Origin!”

Being my first time at such an event, there was no way a single reporter can do justice to the tremendous talent that merged into The Alternative Press Exposition this past weekend. Although not a Stargate, Farscape, or other science fiction convention that we normally would cover, the topic of Alternative Press needs attention. With so much of our news now coming in alternative forms on-line such as blogs, live on-line broadcasts, and other non-traditional media delivery mechanisms, this was an event that many local fans simply could not miss! I hope my report has given a small taste of the flavor of the Alternative Press Expo, but fans really need to experience it all first-hand just like with any convention to truly appreciate the wonder of the APE event.

From the number of vendors at APE last weekend (over 250), and the thousands of fans who attended, it is fair to say that Alternative Press publishing is both alive and well. So well in fact that APE will return to San Francisco next year on October 16, 2010! Great job Comic-Con on the Alternative Press Exposition! 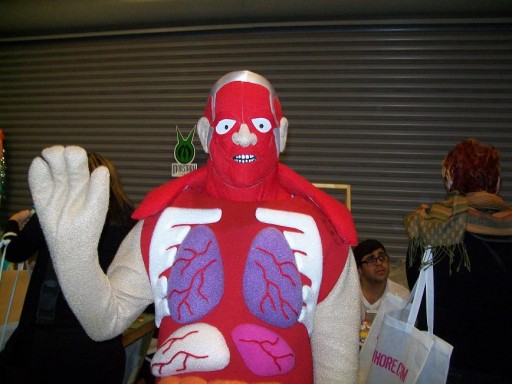 See you all next year at Comic-Con’s Alternative Press Expo!

Mon Oct 26 , 2009
October 9th marked the Season 2 premiere of Sanctuary with the thrilling episode “End of Nights Part 1.” Sanctuary’s Season 2 premiere, following Stargate Universe, was an excellent addition in reviving SyFy Fridays. It appears as though the classic Friday night line up of good sci-fi TV has finally returned! […]